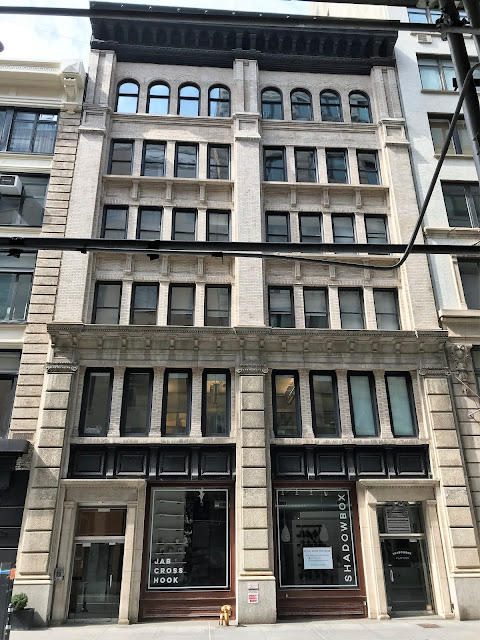 Prosper Montgomery Wetmore, who lived at 28 West 20th Street, was typical of the residents of the block between Fifth and Sixth Avenues in the 19th century.  A legislator and author, he was a founder of the American Art Union.  But well-to-do families like the Wetmores were pushed out of the neighborhood as the 20th century approached and commercial interests moved in.
On April 18, 1902, The New York Press reported that the Alliance Realty Company had purchased the former Wetmore house.  The article noted, "The company bought recently Nos. 31 and 33 West Nineteenth street, running through to No. 30 West 20th Street."  The four houses would become the site of a new loft and store building.
Architect H. Waring Howard, Jr. was commissioned to design the structure, which, according to the Real Estate Record & Guide on September 6, 1902, would be called the Flynt Building.  Howard duplicated his tripartite design on the 20th and 19th Street facades.  Completed the following year, the neo-Renaissance style building featured two-story, rusticated  limestone pilasters that divided the base into two vertical sections.  Two entrances, one to the store space and the other to the upper floors flanked the commercial window.  The three-story mid-section was clad in beige brick.  A stone cornice supported on small, fluted pilasters between the brick piers accentuating each floor.  The windows of the top floor formed an arcade, below the cast metal cornice. Among the initial tenants were the Andrews School Furnishing Co. and Samuel Oppenheim & Brother.  Touting itself as the "oldest established school furniture house in the country," Andrews also marketed "opera chairs," and church furniture.  Samuel Oppenheim & Brother took three floors in the new building.  Despite the size of its operation and long-established trade, the maker of women's cloaks and suits quickly suffered financial problems.  On December 1, 1903 the Fur Trade Review reported that the firm had declared bankruptcy.
The store space was leased to a surprising, short-term tenant that year--Tammany Hall's "sub-Post Office."  On October 24, 1903 The Evening Telegram explained, "During the last few days, as the eve of the hottest and most bitterly contested municipal election in the stormy history of New York politics approaches, the mails have been deluged with a flood of campaign literature issued broadcast by the press bureaus of both parties."  The Tammany press relations operation, however, was immense.
The article said that in the past week, 200,000 persons had received "a copy of a book called 'Father Knickerbocker Adrift,' in which Tammany's side of the story was set forth."  In order to accomplish this monumental undertaking, Tammany had leased the store space, which ran through to 19th Street.   It was laid out factory-like.  At the front half were tables where more than 100 young women addressed envelopes "from early morning until midnight."  As an inducement for them to write fast, each day the woman who turned out the most envelopes was rewarded with an extra week's pay bonus. 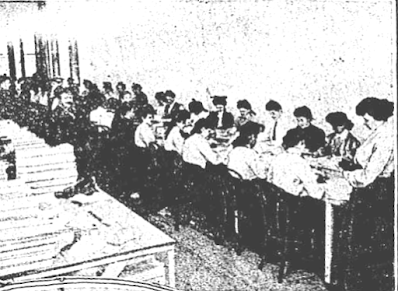 Young women, chosen for their handwriting and speed, at the envelope addressing area.  The Evening Telegram, October 24, 1903 (copyright expired)
In another section, "girls are busy folding, putting in envelopes and sealing the books.  Everything works like a machine."  The article said, "There is no disorder, no confusion or noise, nothing but the subdued buzz of busy workers.  They have no time to talk, these girls.  They are paid to work, paid well, and get supper money and overtime, and then there are prizes." 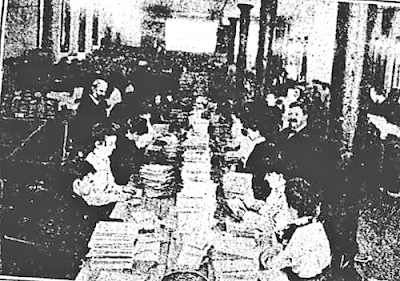 Other workers stuff the booklets into the addressed envelopes.  The Evening Telegram, October 24, 1903 (copyright expired)
Clerks gathered the stacks of addressed envelopes, rushed piles of books to the envelope stuffers as needed, and took the sealed envelopes to the stamp station.  (When the system was set up, $15,000 worth of stamps--about $455,000 today--were purchased from the Post Office.)  Once stamped, they were stuffed into mail bags for transport to the Post Office.  At the time of the article 657 bags had been filled.
The floors formerly occupied by Samuel Oppenheimer & Brother quickly filled.  In the January 1904 issue of Cloaks and Furs, the David I. Ullman company, maker of "silk waists and shirt waist suits" announced it was moving into the building.
And with the Tammany operation gone, around 1905 the piano store of George W. Herbert moved into the store space.  Unlike the piano manufacturers who had their own retail stores on Fifth Avenue and Union Square, Herbert handled "all the leading makes."  He widened his market in 1905 by offering pianos to rent, as well; and in 1912 advertised "Pianos bought, sold exchanged, rented, and on installments.  Tuning and Repairing promptly attended to."
The New Toy Mfg. Co. was upstairs by then.  The firm made the dolls and stuffed animals given as prizes at fairs and carnivals.  An advertisement in The Billboard in March 1914 called the firm "The Kings of 'Em All" and the "largest manufacturers of Teddy Bears, Snookey Ookum Dolls, Dressed Teddy Bears, Pillow Tops and all kinds of novelties for Paddle Wheel purposes."
The toy maker shared the upper portion of the building with garment makers:  the National Women's Wear Co., Big "G" Cloak and Suit Company, and Emil Haas.
In 1915 the A. H. Stiehl Furniture Co. took a floor.  As the firm grew, it would expand within the building, eventually taking the store space as well.  By the second half of the 20th century the Flynt Building would be almost universally known as the Stiehl Building. 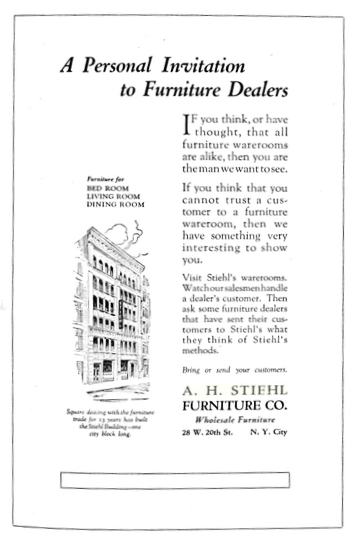 In 1923 the firm's advertisements referred to "The Stiehl Building."  The Furniture Index, May 1923 (copyright expired)
By the last quarter of the century, A. H. Stiehl occupied the entire building.  An advertisement promoting its Washington's Birthday Sale in New York Magazine on February 7, 1972, read in part, "All styles and periods at big savings.  Values like these can't last forever.  Get your decorator to arrange a visit now."
After decades in the building, by the mid 1980's, A. H. Stiehl  was gone.  In 1986 Shar Creations, Inc. operated from the building, and in 1995 the F-Stop restaurant opened in the ground floor.  The New York Times' food critic Florence Fabricant called it "where food meets photography."  The space was home to Eden in the early 21st century.  It was described by Henry Hill in his 2003 Goodfella's Guide to New York, who said, "This property, like most of the people here, is absolutely beautiful.  Flowers, waterfalls, don't forget your Eve, Adam, unless you are a stud." 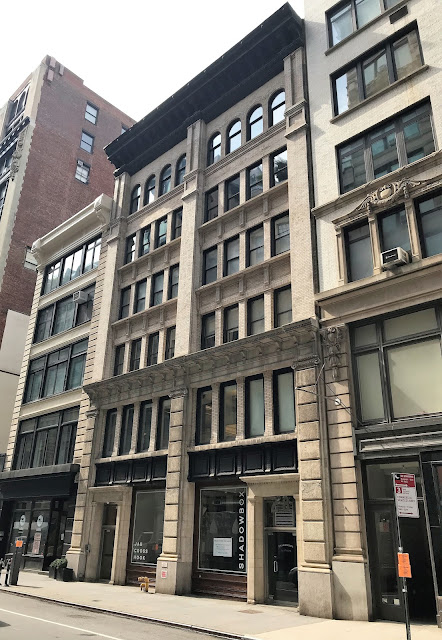 A renovation completed in 2014 resulted in offices on the upper floors.  Both facades are remarkably unchanged, including the storefronts, normally the first to go.
photographs by the author
LaptrinhX.com has no authorization to reuse the content of this blog
Posted by Tom Miller at 1:00 AM