John Woodruff Simpson was born in East Craftsbury, Vermont on October 13, 1850.  After graduating from Amherst College in 1871, and from the Columbia Law School in 1873, he practiced law for more than a decade on his own, specializing in corporate law.  On January 1, 1884, he formed a partnership with two other Columbia Law School graduates, Thomas Thacher and William M. Barnum.  The firm, Simpson, Thacher & Barnum prospered and Simpson continued to focus on corporate law.
In 1897 Simpson and his wife, the former Kate Seney, were living at 34 West 20th Street when their only child, Jean Walker Simpson, was born.  At the time their neighborhood was rapidly changing as commercial buildings were replacing the private homes.
The following year Simpson purchased the plots at 925 and 926 Fifth Avenue, between 73rd and 74th Streets, and hired mansion architect C. P. H. Gilbert to design two residences.  His plans were filed on August 12.  The Simpson residence at 926 Fifth Avenue would be 26-feet wide and cost $50,000--about $1.6 million today.  The second, an investment, was slight narrower at 21-feet and would cost $45,000. 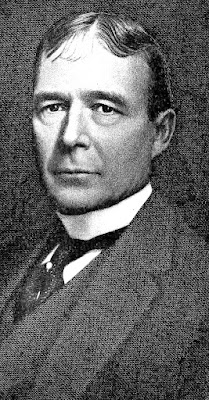 John Woodruff Simpson, from Vermont, The Green Mountain State, 1923 (copyright expired)
Completed in 1899, the two residences were visually harmonious, but architecturally individual.  Unlike its neighbor, 926 Fifth Avenue was asymmetrical, its entrance within a columned portico sitting to the side of a rounded, two-story bay.  The first through fourth floors were faced in beige brick and trimmed in limestone, while the fifth floor took the form of a high mansard with two pedimented dormers that sat atop the bracketed limestone cornice. 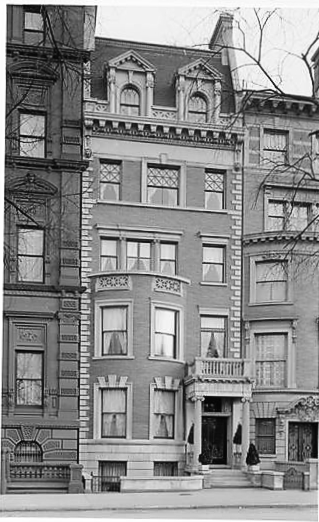 The portico provided a balcony to the second floor.  photo by Wurts Bros., from the collection of the Museum of the City of New York.
Kate was the daughter of George I. and Phoebe Augusta Seney.  Seney, who was president of the Metropolitan Bank and the founder of the Seney Hospital of Brooklyn, had died in 1893, leaving the equivalent today of $65.5 million to charity.  Phoebe now moved into the new house with the Simpsons.
Although the family maintained a country house in East Craftsbury, Vermont, they did not necessarily spent all their summers there.  On June 23, 1900, for instance, the New York Herald announced, "Mr. and Mrs. John Woodruff Simpson, of No. 926 Fifth avenue, who are visiting friends in East Hampton, L. I., will start for Bar Harbor, where they have taken a cottage for the summer, next Saturday."
Notably, they went to Europe each year and in 1901 visited the studio of Auguste Rodin.  It was the beginning of a close friendship between the couple and the artist, and of the Simpsons' stunning collection of Rodin works.  When the Simpsons returned in 1902, Kate first posed for a marble bust.  In an interview with The Craftsman in 1904, the sculptor talked about the nearly-finished portrait:

Almost invariably, there is intelligence in the faces of the women of this nation...But there is, furthermore, kindness of heart evidences in the countenance of this model.  That is what I shall attempt to express. 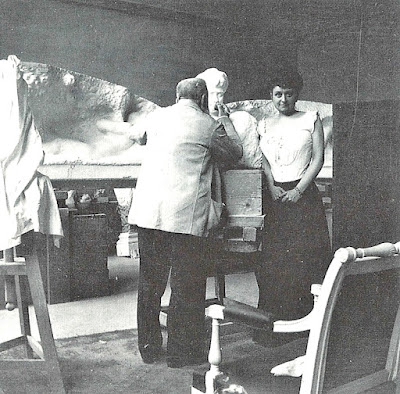 Kate Simpson posing for Rodin in 1902.  Published in Ruth Butler, Rodin: The Shape of Genius, 1996, p. 412.
The Simpsons had four Rodins in their Fifth Avenue mansion in 1903: casts of the Thinker, St. John, Head of Balzac and the Centauresse.  As their collection grew, so did their friendship with Rodin--to the point that their visits were mutual.  According to the 1987 The Documented Image, Visions in Art History, "In December 1906 Kate wrote to Rodin, 'Each day I have a fresh impression of my beautiful marbles.  You can not know what joy it gives me to possess them.'  She ends her letter by saying, 'When you come to see me in April, I am sure that you will find these beauties well placed.'" 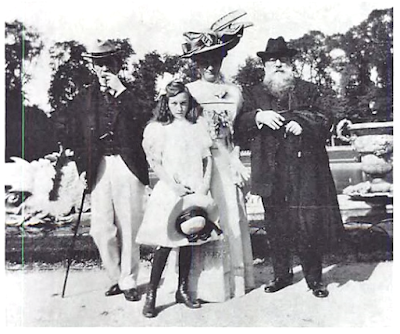 The Simpson family and Auguste Rodin visit Versailles in 1906.  photo by Ouida Grant from Ruth Butler's 1993 Rodin, The Shape of Genius.
On January 21, 1904, The Atlanta Constitution headlined an article, "Mrs. Seney Falls Asleep," and reported that Phoebe Augusta Seney had died in the Fifth Avenue mansion three days earlier.  The article noted, ""During her life, Mrs. Seney continued her husband's benefactions."  The Sun added, "Mr. Seney owned one of the finest collections of paintings in the country." 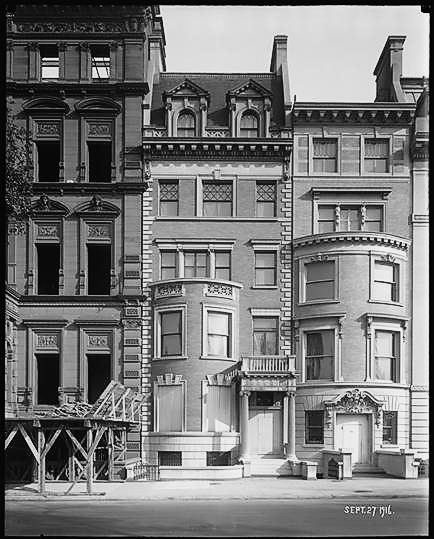 The house was still closed up for the season when this photograph was taken on September 27, 1916.  photo by Wurts Bros. from the collection of the Museum of the City of New York.
John Woodruff Simpson died in the house on May 16, 1920, at the age of 69.  In reporting his death, The Sun called him "one of the most successful corporation lawyers of this city."  It made special note of the Simpsons' art collection, saying:

Mr. Simpson was greatly interested in the fine arts and had a collection of paintings which included some of the best works of the old masters.  He was a friend of Rodin, and was the owner of what is said to be probably the best private collection of the sculptor's art in existence.

Simpson left an estate of $2,665,894, the equivalent of $41 million today.  The New York Herald reported that he "divided his estate between his wife, Kate Seney Simpson, and his daughter, Jean W. Simpson." 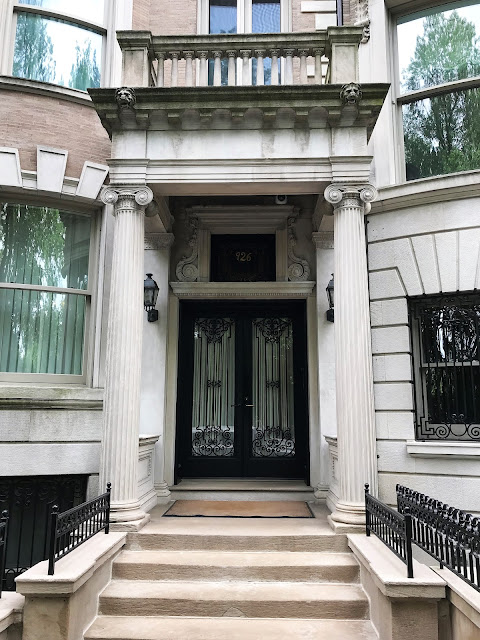 Jean, who never married, exhibited a broad range of interests.  In 1921, for instance, she was the chairman of the ticket committee for a performance at the Metropolitan Opera to benefit the New York Women's League for Animals.  In his 1930 The New Conquest of Central Asia, Roy Chapman Andrews listed Jean among the "contributors to Central Asiatic Expeditions." 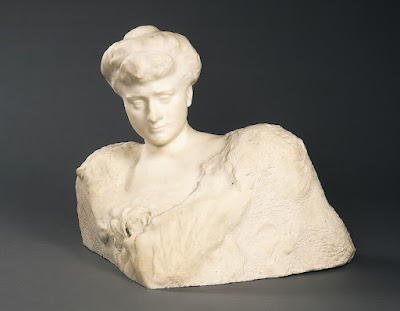 Rodin's bust of Kate Seney Simpson, from the collection of the National Gallery of Art.
The Simpson mansion nearly fell victim to what police dubbed the "Human Fly" in 1931.  The agile burglar, Robert Ramsey Russell, deftly managed to scale the walls of upscale homes on the Upper East Side.  On December 11, detectives hid in the shadows, hoping to catch him.  The Pittsburgh Courier reported:

Russell was captured just after midnight Friday when he attempted to rob the house of Mrs. John Woodruff Simpson, at 926 Fifth avenue.  He was spotted by a handful of 60 detectives and patrolmen who have waited in doorways and hallways of the Upper East Side for the last month, seeking the acrobatic burglar...The detectives were amazed as they saw the agile colored man shinny up a drain pipe to reach the lower part of the fire escape at the Simpson house.  With cat-like efficiency, their quarry hurried up the fire escape and entered the building through a window on the top floor of the five-story house.

The 27-year-old was unlike any other burglar in another sense.  Called by The Pittsburgh Courier "America's modern Robin Hood," the newspaper said he "had hoped to start a breadline in Harlem with the proceeds of his alleged $300,000 robberies."
Around the start of World War II Kate and Jean moved permanently to their East Craftsbury, Vermont home.  In leaving the Fifth Avenue mansion, according to The New York Times, Kate gave much of the art collection "to the National Gallery, Washington, D. C., and to other museums."  Kate died in East Craftsbury on January 11, 1943.
In the 1950's 926 Fifth Avenue was the home and office of Dr. Nathaniel J. Beeckir, a psychiatrist.  In 1969, the newly-formed advertising firm Plus opened its offices within the home, and in 1972 another new advertising office, Acme Communications moved in.  In reporting on that official opening, The New York Times said the partners "work out of classy digs at 926 Fifth Avenue."
A renovation completed in 1979 resulted in medical offices in the basement and first floor, and two apartments each on the upper floors.  That year the Center for the Study of the Presidency operated from the building,   On October 3, 1979, The New York Times said, "Aficionados of politics will find 4,000 microfilms and periodicals on subjects ranging from policies to problems in staffing the Presidents office."  It also held a collection of books by and about Benjamin Franklin, and the entire archives of George Washington papers on microfilm. 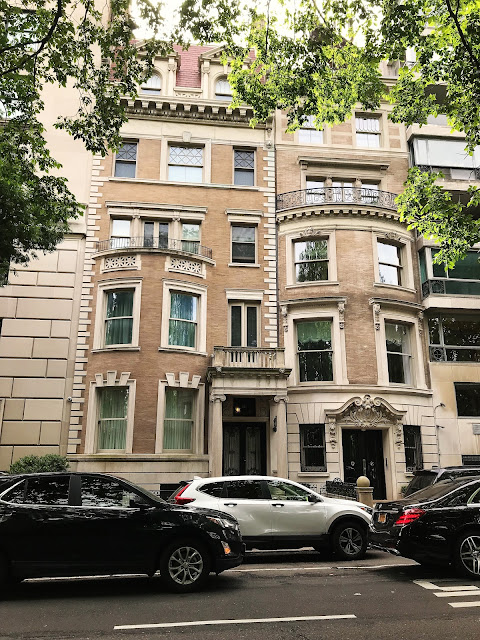 Around 2005 the house was returned to a single family home.  That year it was offered for lease at $37,000 per month.  A subsequent renovation was completed in 2013.  Squashed in between two soaring apartment buildings, the two Simpson houses are remarkable holdouts from a much different era along this section of Fifth Avenue.
photographs by the author
LaptrinhX.com has no authorization to reuse the content of this blog
Posted by Tom Miller at 1:00 AM