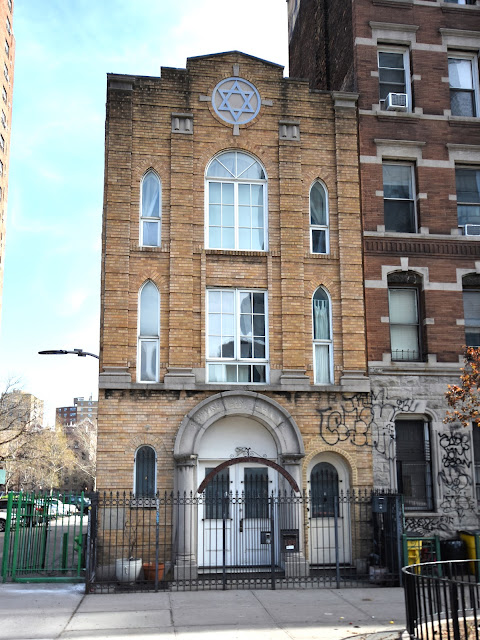 Today a part of western Ukraine, the small town of Podhajce (or Pidhaitsi in Ukrainian) had a significant Jewish population in the 19th century.  There were two places of worship in the town, a Catholic church erected in 1634, and a synagogue which was built around the same time (no later than 1648).  In 1890 there were 3,879 Jews within the town proper, out of a total population of 5,646.
It was about that time that a small group of Jews left everything behind and embarked on the dangerous journey to America.  They settled in the East Village, a neighborhood becoming increasingly crowded with immigrant families from Hungary, Poland, Ukraine and Germany.  In 1895 Congregation Masas Benjamin Anshe Podhajce was organized.
In 1926, the congregation purchased the three-story and basement building at 108 East 1st Street and commissioned architect Robert Dreyfuss to renovate it into a synagogue.  He reclad it in yellow brick laid to give the impression of rustication.  The base, separated from the upper portion by a limestone bandcourse, included a centered, main entrance within a stone arch supported by hefty, engaged columns; an entrance to the upper floors at the side, and an arched window.  The name of the congregation was carved in Hebrew over the doorway, and cast into the iron arch above entrance gates was the inscription (translated) "Contributed by the Podhajce Ladies Auxiliary."
Dreyfuss accentuated the linear appearance of the upper section with the use of four double-height piers, each sitting on a limestone base.  The center piers terminated in stylized Torah scrolls, and a large Magen David, or Star of David, adorned the large rondel below the stepped parapet.
On the first floor was a study, the sanctuary engulfed the second floor, and on the third was a women's area.  Shortly after the building's completion, the congregation shared it with another group from its hometown, Congregation Rodeph Shalom Independent Podhajce.  That congregation was in the process of erecting a new synagogue at 7 West 83rd Street, which would be completed in 1930.
By the early 1980's, the East 1st Street shul was home to a Lithuanian congregation, Kochob Jacob Anshe Kamenitz.  The changing demographics of the neighborhood kept the property in flux.  In 1985 it became vacant, and remained so until 1990, when Congregation Beth Yitzchok moved in.  But, again, its residency would be short-lived. 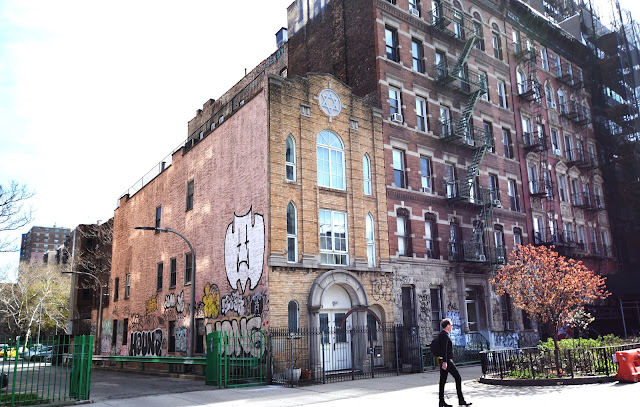 The first of major changes came in 1995 when three artists established The Synagogue Space for the Visual and Performing Arts here.  Then, a significant remodeling, completed in October 2002, resulted in a large triplex apartment which shared a portion of the ground floor with a small residential space.  In converting the property, the architects compassionately preserved the historic elements of the facade.
photographs by the author
no permission to reuse the content of this blog has been granted to LaptrinhX.com
Posted by Tom Miller at 1:00 AM