The Varied History of 40 Avenue C 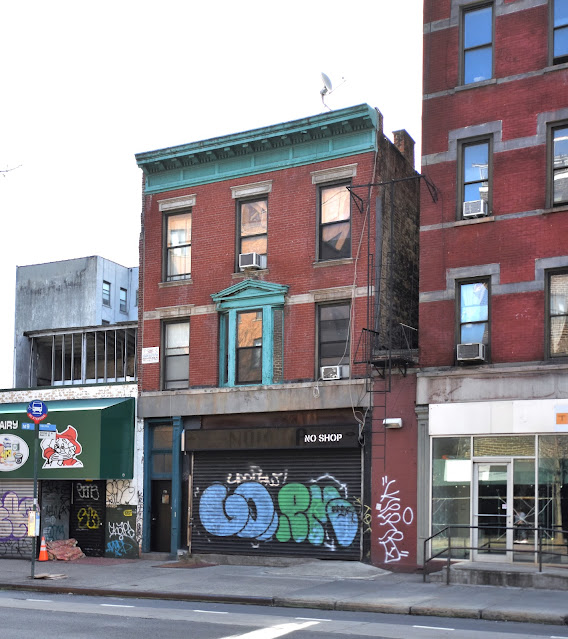 In the 1840's, the house and store at 40 Avenue C was home to a number of blue collar residents.  Little had changed in 1863, when the ground floor cigar store was used by the city as an election polling place.  And it appears that the residents were living in less than comfortable conditions.  On July 10 and 11, 1867, the Sanitary Company of Police set its "subdivision of unskilled labor" to work "whitewashing walls and cleaning cellar" of the building.

Then, in 1869, builder Charles Boehm purchased this and other Avenue C properties from Bernard J. Fry.  It seems to have been Boehm who updated (or replaced) the old building.  A marble bandcourse now ran through the second floor brickwork and the upper floor openings boasted paneled lintels.
Charles and Katharina Boehm had four children, Charles, Annie, John, and Rosa.  The family continued to house boarders, both in the main house and in the small building in the rear yard.  Most of their tenants were German immigrants.
That was not surprising.  The neighborhood had seen the influx of Germans since the 1840's, and by 1855 only Berlin and Vienna had a higher population of Germans than New York City.  It was likely that Charles Boehm, himself, was one of those early German immigrants.
Following Charles Boehm's death around 1885, Barbara Boehm (the widow of John Boehm) ran the boarding house.  The accommodations must have been crowded.  In the three-story rear building were the families of four tenants, a shoemaker, a cabinet maker, a baker and a hatter.   Above the ground floor real estate office of Goodman & Adler, Barbara had seven boarders: two bakers, a carpenter, a printer, a shoemaker, a coal merchant, and Mary Jaekle, a widow who dealt in umbrellas.  Each of them had a German surname.
On April 21, 1886, Katharina Boehm leased the building to Wolf Morris.  By the time she leased it again in 1890, she had remarried, the paperwork listing her as "Katherina Muller, formerly Boehm."
While the Boehm's boarders had traditionally been hard-working and respectable, by the turn of the century at least one was not.   Living in a front room on the top floor was a woman, described by investigators as of "fair complexion, round face, weight 160 lbs., 30 years, high [sic] 5 ft. 5", Jewish."  She had a reputation both with her neighbors and the police.
On November 5, 1901 Vice Inspector H. S. Conklin filled out a "Disorderly Tenement House" complaint, saying he had visited the woman four days early with Jacob (known as John) Kreiswurth.  The complaint said, "John paid her in presence of me.  She then took him in a small room, remained there for short time, then we left."  (The payment was $1, or about $30 in today's money.)
Why three more visits to the woman's rooms over the next few days were necessary is unclear.  Kreiswurth wrote about their visit on November 7, saying:

She took me to a bed room and exposed her self for Prostitution purposes which I declined.  A partie [sic] who lives on the same floor, back, told us that it is a shame to live with such a woman on the same floor.

There were four tenants living in the rear building on January 9, 1902 when a chimney fire broke out.  Happily, it was extinguished by fire fighters before any significant damage could be done.
Annie Sadlak ran the boarding house in 1906.  Typical of her tenants was Frank Woodinski, a brick layer.  He was working on construction site at 122nd Street and Second Avenue on September 24 that year when disaster occurred.  The New-York Tribune reported, "Edward Brandt...who was working on the scaffold, missed his footing and fell heavily against the new wall which the men were building.  In a moment it collapsed and about ten men fell two stories to the ground."  Among the most seriously hurt was Woodinski, taken to Harlem Hospital "with injuries to legs, arms, body and head and a probable fracture of the skull."
Three months earlier, in June 1906, Annie Sadlak had taken in a new boarder, Michael Sabak.  One afternoon while she was out visiting friends, he sneaked into her rooms and stole a gold watch and chain and $200 from a bureau drawer and disappeared.  (The cash alone would be more than $6,000 today.)
Romance put an end to Sabak's freedom.  Annie Sadlak read the news of his upcoming wedding in January 1907.  She went to police, who arrested him at the wedding reception on January 27.  The New-York Tribune reported, "When the bridegroom's arrest became known, the bride collapsed."  A search of Sabak at the station house revealed "a pair of brass knuckles and a pawn ticket, it is alleged, for the watch which he is charged with stealing from Mrs. Sadlak."
On September 27, 1906 the Tenement House Department cited 40 Avenue C for "unsanitary conditions."  The situation was corrected by Sigmund Kraus, who signed a lease on the building on January 17, 1907.  He initiated alterations, designed by architect Max Muller that included new store fronts, stairs, windows and interior walls.  It was most likely at this time that the distinctive second floor copper bay and the new copper cornice were installed.
The renovations seem to have attracted more upscale tenants.  In 1909, Frederick Hemley lived here when he was appointed a commissioner of deeds.  In 1914 Jack Branower passed his medical licensing examination; and by 1917 Deputy Attorney  General William Blau lived here.  That year Mayor John Mitchel appointed him a city magistrate.   He remained in his apartment at least through 1918.  The store space at the time was either a tavern or liquor store, the excise license being held by S. Kraus & Bro. 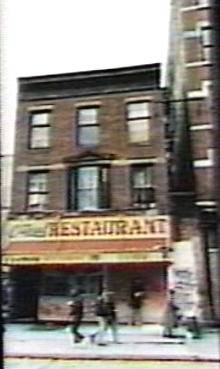 The building as it appeared in 1983.  via the NYC Dept of Records & Information Services
In the 1980's, the commercial space held the Camano Restaurant.  It reflected the changing demographics of the neighborhood, as an increasing Hispanic presence joined the Ukrainian and Russian population.
Then, in 2010, what The New York Times called the "pansexual" nightspot, Bedlam opened in the ground floor.  On September 29, the newspaper's journalist Tim Murphy said, "It's a modern-day love triangle:  Williamsburg-y gay men bring their gal pals, who attract straight guys, who in turn bring out more gay men."  The space had come a long way since its days as a German-language real estate office.  Murphy noted, "A recent soft opening drew a hodgepodge of luminaries, including Anderson Cooper, Sarah Jessica Parker, Matthew Broderick and Alan Cumming." 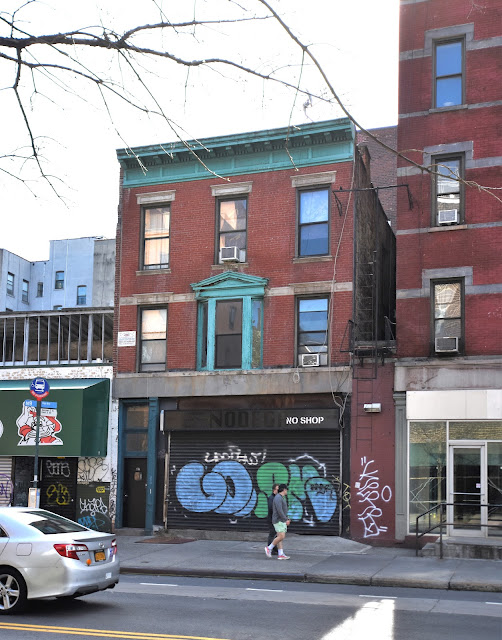 Recently the ground floor space sprouted the purposely puzzling sign "Nodega," noting "No Shop," "no coffee," "no cold beer," "no groceries, and "no cigarettes."
photographs by the author
LaptrinhX.com has no authorization to reuse the content of this blog
Posted by Tom Miller at 1:00 AM