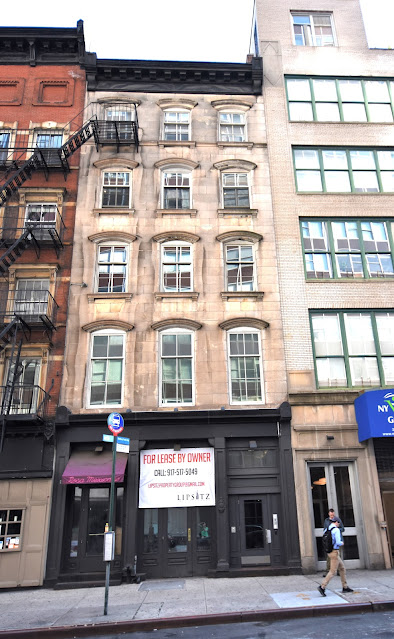 In 1855 attorney Jonathan J. Broome was leasing the house at 41 Murray Street from English-born merchant Ebenezer Cauldwell.  At the time, the blocks around him, until recently exclusively residential, were rapidly being transformed with new commercial structures.  Within the year Cauldwell either demolished or substantially renovated the house.  His architects, almost assuredly Thomas & Son, produced an Italianate loft-and-store building faced in marble above a cast iron storefront.  Each of the segmentally arched upper floor windows wore a molded lintel.
Although Cauldwell was a major importer of china, glass and earthenware, his project was an investment rather than a site for his own business.  He leased the upper floors to Patten, Lane & Merriam, wholesale dealers in boots and shoes, while hardware and cutlery dealer Thomas E. Bishop & Co., took the first floor store.  The firms had hardly settle into their new home before it was nearly lost.
At 3:00 on the morning of November 9, 1856, fire broke out in the cellar of 39 Warren Street, directly behind 41 Murray Street.  It was daylight before firefighters could extinguish the blaze, which by now had spread, resulting in what The New York Times called "the utter destruction of four of the finest buildings in that part of the City."  Although 41 Murray Street was not totally destroyed, it was heavily damaged.  The New York Times reported, "The rear of No. 41 Murray-street was damaged by the falling of the adjacent building, which demolished the roof, carrying away the floors down to the sub-cellar."  Thomas E. Bishop & Co. sustained losses of $15,000--a substantial $475,000 in today's dollars.  Despite the rocky beginnings, both firms moved back into the building following the repairs.
In 1859 Thomas E. Bishop & Co. sent a clerk, Henry M. Malone to the West to collect outstanding debts.  Malone went to Illinois and Michigan and was successful in collecting the equivalent of $52,000 in today's money.  The problem was that he kept it for himself.  He was tracked down and arrested, and on July 27 The Family Herald reported, "The prisoner denied the charge preferred against him, and appeared sanguine of being able prove his innocence in the matter."
Patten, Lane & Merriam still occupied the upper floors at the time, but both firms would be gone by the mid-1860's.   They were replaced by B. Diamant & Co., importers of "French, English, and German Fancy Goods," and Abraham s. Herman, dealer in "cloths, cassimeres & vestings."
The following decade saw hardware dealer E. A. Heath & Co. and the Automatic Signal Telegraphic office (a fire and burglar alarm firm) in the building.  James H. Ingersoll was the principal in E. A. Heath & Co.  The firm had a highly lucrative contract with Tammany Hall.  But problems came in 1871 when The New York Times published details of the city's financial accounts.  The Committee of Seventy was formed in September to examine and corruption in the Tweed ring.
"Boss" William M. Tweed was arrested in 1872.  The scandal spread to the merchants involved in Tammany's web of kickbacks and graft.  On June 25, 1872 the New York Herald reported that a petition had been submitted in court "to have the hardware firm in Murray street, of which James H. Ingersoll is principal, thrown involuntary bankruptcy."  The article noted, "The place of business is at No. 41 Murray street, and is said to have been, up to the time of the recent Tammany exposure, the source from which the city obtained its hardware."
The Murray Street building remained in the Cauldwell family until March 2, 1882, when it was sold at auction to Edward G. Tinker for $36,100 (approximately $943,000 today).   He altered the ground floor for a surprising tenant--Fire Insurance Patrol No. 1.
Established in 1839, New York Board of Fire Underwriters was a private organization, distinct from the Fire Department.  It was formed by insurance companies that sought to prevent or at least reduce the loss of property caused by fires.   Claims by merchants for lost inventory were often due to water damage caused by the fire department as much as by the fire itself.
The Patrol would rush to a fire working side-by-side with fire fighters, laying tarps to protect goods from water , removing goods when possible, and all the while fighting the flames.
The storefront of 41 Murray Street was renovated with a centered bay to accommodate Patrol No. 1's fire truck.   In the meantime, the upper floors continued to be leased to more expected merchants, like Julius Wile & Brother, importers and wine and liquor; wine dealer Herman Cantor; and Philip Michaelson & Son, brush merchants.
Having a Fire Patrol next door had both its benefits and drawbacks.  On May 27, 1893, William J. Darnstaedt, who ran a "bar glass ware" business at 43 Murray Street, testified, "The building No. 41 is the fire patrol.  We hear the engines whenever they are coming out.  We perceive the effects of the ordinary noise of a concern of that kind being next door.  We hear them when they get the alarm in; we hear them when they go out, as we naturally would."
Fire Patrol No. 1 would remain in the building for decades.  And, like the engines of the regular Fire Department, there were sometimes accidents.  On October 15, 1906, for instance, the Paterson, New Jersey newspaper The Morning Call reported:

An alarm of fire at No. 3 Desbrosses street this afternoon called out Salvage Corps patrol truck No. 1 from the headquarters at No. 41 Murray street.  The vehicle, weighing close to 5,000 pounds, swung out of the house, clanging its bell furiously.  The motorman of a northbound Sixth avenue car, which was speeding up West Broadway at a swift gait, says he didn't hear either bell or gong.  His car smashed into the truck at the Murray street crossing with great force.

The Sun said the truck was "drawn by two white horses and with the crew of seven men seated high up on the wagon."  Those men were "hurled through the air and landed in all parts of the street," as worded by the Morning Call.  Most of them were unconscious when bystanders rushed in.  At least one perished from his injuries. 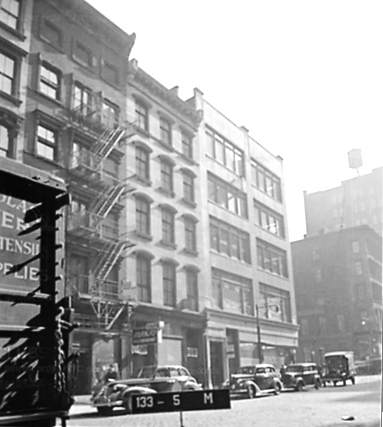 image via the NYC Dept of Records & Information Services
Fire Patrol No. 1 was still at 41 Murray Street as late as 1921; but the narrow proportions of the Victorian structure could not accommodate modern equipment for much longer.   By 1929 the building had filled with industrial tenants, like the Evansville Tool Works, Hanson Bros. Scale Works, the La Pierre Sawyer Handle Co., the Spargo Wire Co. and other related firms. 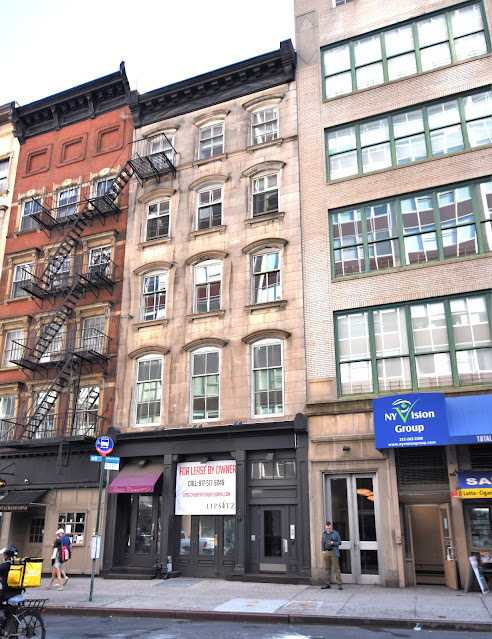 Change in the Tribeca neighborhood arrived in the 1970's when ground floor, once home to the horse drawn fire wagons, became Rosie O'Grady's Irish restaurant.  In 1982 the upper floors were converted to residential, one apartment per floor.   More recently the ground floor was home to Shore, an oyster bar.
photograph by the author
LaptrinhX.com has no authorization to reuse the content of this blog
Posted by Tom Miller at 1:00 AM