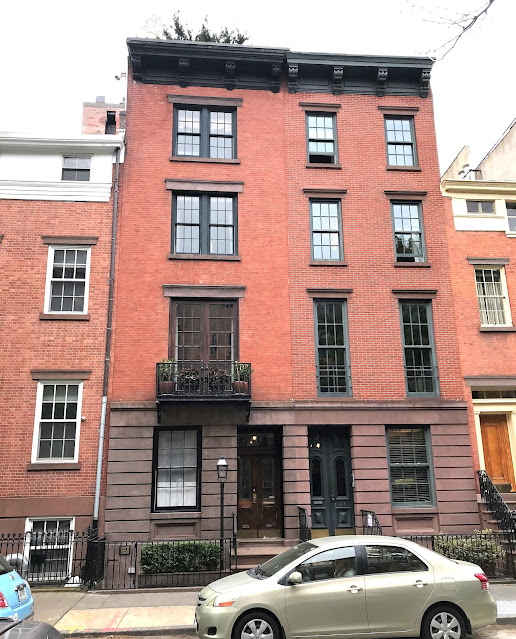 In 1854 developer William Berrian's vacant, 32-foot-wide parcel on the south side of West 22nd Street between Ninth and Tenth Avenues provided him with an option.  He could erect one mansion or two skinny houses, each just over 15 feet wide.  He chose the latter.
Completed within the year, the mirror-image homes were designed in the Anglo-Italianate style.  Short stoops, three steps high, led to the double-doored entrances within a rusticated brownstone base.  The three upper floors were clad in warm red brick and trimmed in brownstone.  The full-height windows at the second floor may have been fronted by cast iron balconies.
The Swift family moved into 306 West 22nd Street (renumbered 446 in 1868).  Charles Swift was a carriage maker whose business was at 44 Mercer Street.  There is little doubt that his son, Charles, Jr., learned his trade from him, but for some reason the two did not initially work together.  Charles Swift, Jr. was listed in directories in 1860 as "coachmaker" with a business address of 372 Broome Street.  They would join forces by 1867, however, operating as Charles Swift & Son at the Mercer Street location.
By then the Swifts had been gone from West 22nd Street for three years.  The house was now home to Eliza Milne Chandler, whose husband, Adoniram Chandler, had died in 1854.  Widows often took in boarders for extra income, but that was not the case with Eliza, who lived here alone with her small staff of servants.  Her husband had apparently left her a sufficient estate upon which to live. 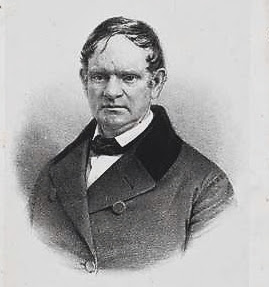 Eliza's husband, Adoniram Chandler, died ten years before she moved into the West 22nd Street house.  from the collection of the Museum of the City of New York
Adoniram had been highly involved in politics and was a Whig candidate for State Assembly at least once.  He was a Legal Collector of Arrears of Taxes for the city, with an office in the Old Alms House.
In the meantime, the house next door was initially home to Hamilton R. Searles, who listed his occupation as "mirrors" at 57 White Street in 1859.  By the following year he had opened a second store at 62 West 13th Street, and had expanded into "frames."
John C. Brampton and his wife moved into that house in 1864.  He was a real estate agent and it appears his wife helped out in the business, as well.  An advertisement in the New York Herald on April 28, 1866, for instance, read:

Martin Fox purchased the Brampton house (now renumbered 448 West 22nd Street) in 1871.  He ran a store at the corner of 37th Street and Ninth Avenue until 1877, when it appears he retired.  He remained in the house until June 1885, when he sold it to Ernestena C. Unger for $12,500, just under $350,000 today.
Around 1895 Dr. C. Kierstedt and his family moved into 446 West 22nd Street.  He came from a long tradition of physicians, the first Dr. Kierstedt arriving in New Amsterdam in the 17th century.  The Kiersteds' daughter was a member of the Children of the Holland Dames of the New Netherlands and the house was several times the scene of the group's meetings.
The grade school aged members had serious business to attend to.  At a meeting here on April 4, 1898, for instance, the children addressed the on-going Spanish-American War.  Nine-year-old Sarah Bancker Trafton entrusted a letter to a reporter from The World to be sent abroad.  The succinct and straight-forward message read:

To Alfonso XIII, King of Spain:
Please have this war stopped at once.  I don't like it.
Sarah Bancker Trafton
Regent of children of Holland Dames of the New Netherlands.

And after the agenda points had been taken care of at the meeting a month later, Sarah asked, "Any new business?"  Mai Moore stood up and said, "I move that we look after the war correspondents.  They're just as much heroes as soldiers are."
Asked what they could possibly do, Mai answered, "Why, if they get sick and need things in hospitals, or clothes, they could just let us know.  And if they were in prison, maybe we could help them out.  I prayed for the two that were shut up in Havana, and now they're out."  The group voted to adopt the "looking out for poor war correspondents" as a priority.
The Kierstedt family remained in the house at least through the first months of 1902, after which it appears to have been operated as a boarding house.  Among the initial tenants was Orrin J. Ford, whose business was on West 29th Street.  Drinking during business hours was not a problem for Ford, but it nearly cost him his life on August 23, 1902.
The 64-year-old placed his whisky bottle on a window sill, and shortly afterward, someone placed a bottle of muriatic acid next to it.  The Brooklyn Daily Eagle said, "The two bottles looked alike and Ford took up the wrong one."  He drank a mouthful of the acid, spilling part of the bottle over his chin and beard, and collapsed on the floor.  The newspaper said "his cries of agony attracted the attention of his son, William Ford, who ran to his assistance."  A policeman ran to a nearby grocery store and returned with two quarts of milk, which he "poured down the man's throat."  Ford was taken to the New York Hospital where it was deemed the prompt administration of the milk saved his life.
Among the boarders in 446 West 22nd in 1908 was Helen V. McCourt.  That year she passed the civil service test for the position of telephone operator.
Living next door at 448 was the family of Charles Bryant Overton, who had moved in around 1892.   Overton and his wife, the former Carolina Augusta Unger, had five grown daughters, Caroline, Katherine Louise, Carrie H., Elizabeth, and Edith May.
Caroline, Katherine Louise, and Edith May were unmarried and lived their their parents.  Both Katherine Louise and Edith May were teachers.  Caroline seems to have been a bit more progressive.  In 1905 she was the corresponding secretary of the Daughters of the Lafayette Post.  He father, who was now 67 years old, was a veteran of the Civil War.  The purpose of Caroline's group was "to perpetuate the memory of their fathers who fought in the Civil War."
Caroline's modern bent was much more apparent when The American Stationer reported on December 19, 1914 that the "stationary and bookstore of Caroline H. Overton, at 450 Bedford avenue, Brooklyn...will be opened on January 1."
On April 4, 1920 an advertisement appeared in the New York Herald offering 446 West 22nd Street for sale at $12,500 (about $161,000 in today's money).   It was sold within the month and on May 16 the New-York Tribune reported, "The purchaser will make extensive improvements."

Those improvements included removing the upper floor openings and replacing them with centered, paired windows.  The architect gingerly attempted to match the original brownstone lintels and sills seen next door.  A cast iron balcony fronted the French doors of the second floor.
Author and journalist Marguerite L. Glentworth purchased 446 West 22nd Street in 1926.  It was the setting of meetings and social events for women writers, such as the reception for the League of American Pen Women on April 22, 1926.  Marguerite Glentworth was a member of the New York Woman's Press Club, as well.
Equally interesting was Marguerite's spiritual side.  She claimed to have a "sixth sense" and could foretell coming events or the contents of sealed letters.  She told a journalist from The Forum that she had had "several manifestations of persons who have been out of the world many years--and seen them so clearly that I described peculiarities of their expression and articles of jewelry I had never seen or heard about."  Among those spirts were her great-grandmother and the deceased father of a close friend. 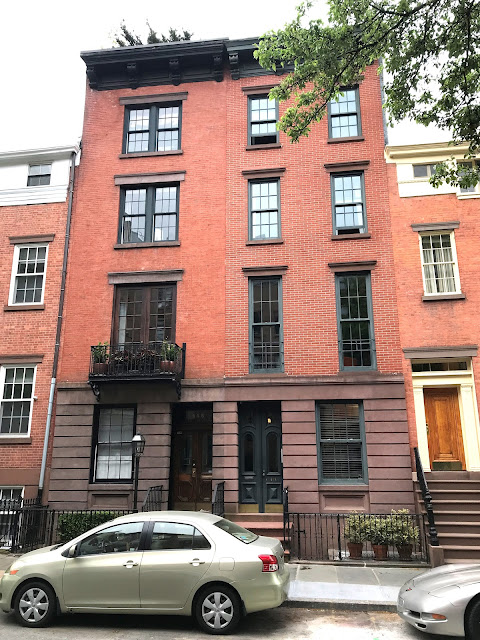 In 1945 446 West 22nd Street was converted to a two-family home with duplexes on the first and second, and the third and fourth floors.  An identical conversion happened next door in 1948.  A subsequent renovation to 446, completed in 2006, resulted in an apartment on the first floor and a single family residence on the floors above.
photographs by the author
LaptrinhX.com has no authorization to reuse the content of this blog
Posted by Tom Miller at 1:00 AM