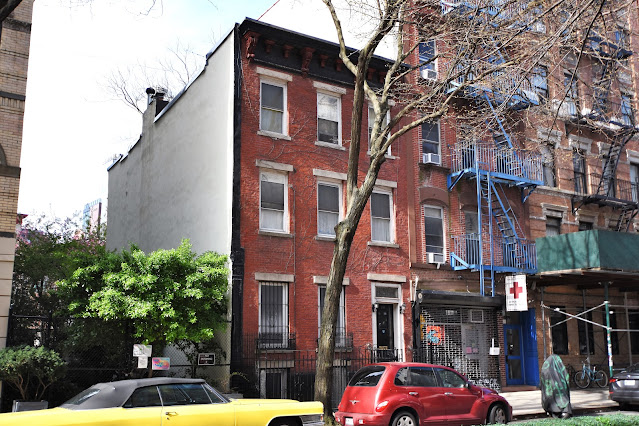 The 1840's saw an increasingly large number of Germans leaving their homeland for America.  While the farmers moved west, many to Pennsylvania, others clustered in the East Village neighborhood.  By 1845 the district had the largest German-American population in the city, known to non-Germans as Dutchtown, and to Germans as Kleindeutschland.

The newcomers brought skills learned in their homeland--like cabinetmaking, brewing, and piano making.  Among the new arrivals was Alois Kirchgassner, who with his wife Mary, moved into the new house at 191 East Second Street, between Avenue A and B in 1853.
The Kirchgassners' modest, brick-faced house was designed in the Italianate style, although it exhibited none of the more showy details like the molded lintels or elaborate entrances found in the Italianate homes of more affluent citizens further west.
Kirchgassner ran a beer saloon nearby, and Mary ran a boarding house from their home.  (Alois may have been a bit controlling.  He listed himself, rather than his wife, as the proprietor of the boarding house, as well as of his beer saloon.)  All the boarders in 191 East 2nd Street were fellow Germans.  In 1857 they included, Jacob Berge and John Seiberg, partners in a butter business in Washington Market; two tailors, Leopold Raufer and John Schweighoefer; Adam Reis, a stonecutter; and Sebastian Neuburger, who worked as a porter.  That year John Kirchgassner, presumably a son, worked in the saloon.
As they became old enough to work, two other sons, Alois, Jr. and Albert, became machinists.  Alois was first, listed professionally in 1872.  That year the boarders included another machinist, Charles Brandt; yeast merchant Henry Kraatz; and John M. Widmayer, listed as "segarmaker."  Albert followed his brother as a machinist in 1876.
The Kirchgassners were victims of a crime on February 16 that year.  The Record of Crime released by Central Office of the police department reported, "Licensed vender's wagon No. 164 was stolen from in front of the owner's house, No. 191 Second Street."
After the Kirchgassners left, around 1879, the house underwent a series of owners (although it contined to be operated as a  German boarding house).  Adam P. Bautro was, perhaps, the first Polish-born boarder, here by 1895.  He was the publisher and editor of the Polish language weekly newspaper Gazetta-Polska.
On March 10, 1895 he was arrested and charged with criminal libel on the complaint of Dr. H. P. Lewanslowski, who had earlier been connected with the newspaper.  Lewanslowski, described by The New York Times as "a well-known physician," was no stranger to disputes.
Three years earlier he had been accused of cheating a Polish priest in a New Jersey property purchase.  Additionally, cigar maker John Misiewicz said that when he came to the priest's defense, Lewanslowski "persecuted him with tales derogatory  to his character, thereby injuring his business."  According to The New York Times on August 10, 1892, the Polish newspaper Postep had demanded the doctor "appear before a 'Jury of Honor,' chosen from among the Polish citizens of New-York."
Dr. Lewanslowski explained at the time, "My countrymen in America are hot-blooded people, as hot-blooded as they are honest and unsophisticated."  Now, as Misiewicz had done, he charged that Adam P. Bautro had damaged his honor and reputation through an article in Gazetta-Polska "based on facts connected with [his] control of the paper."
By 1929 the house was home to the Hertz family.  Ernest Hertz was an attorney and his brother, Benjamin was a doctor.  The Hertzes would remain in the house into the 1940's. 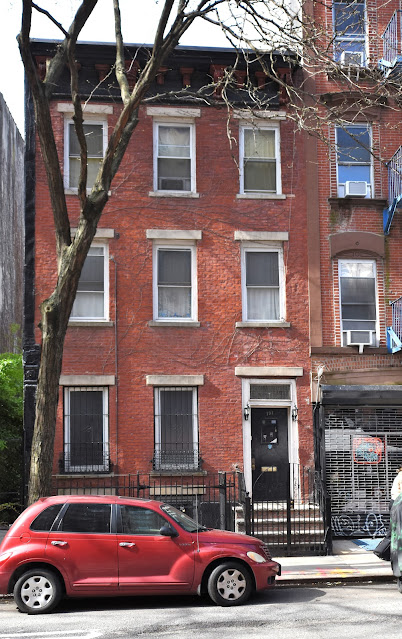 Rather surprisingly, the 19-foot wide house has never been converted to apartments.  One of the few survivors along the block that escaped the tenement building phase of the late 19th century, it is a reminder of a time when German was the predominant language in the neighborhood.
photographs by the author
LaptrinhX.com has no authorization to reuse the content of this blog
Posted by Tom Miller at 1:00 AM