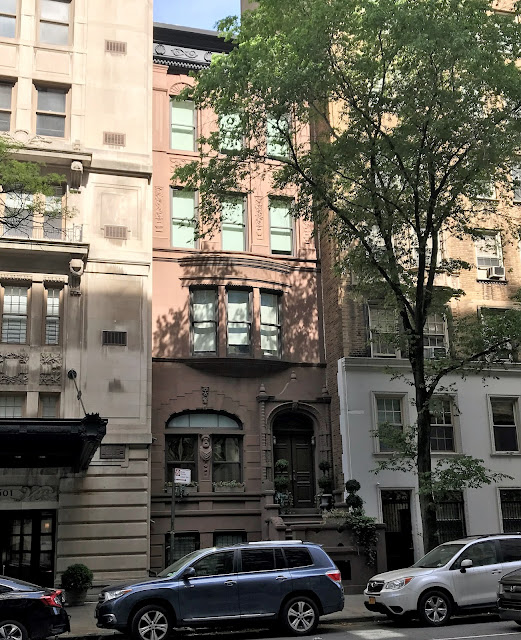 The architectural firm of Thom & Wilson would be responsible for hundreds of rowhouses on the Upper West Side in the 1880's and '90's.   In 1887 the partners were hired by developer Bernard Wilson to design a row of ten upscale homes at 601 through 619 West End Avenue, between 89th and 90th Streets.  It appears that the Renaissance Revival style houses were designed in five mirror-image pairs, the only significant differences being the placement of the entrances at either left or right.

Ground was broken in January 1888 and construction was completed nine months later.  Each brownstone-clad residence rose four stories above a high English basement.  The box stoops took three turns before arriving at the arched entrances.  Two parlor windows, separated by a carved telamon, were united by a stained glass fanlight.  A bowed oriel distinguished the second floor; while above Renaissance style carvings enhanced the pilasters and spandrel panels of the third and fourth floors. 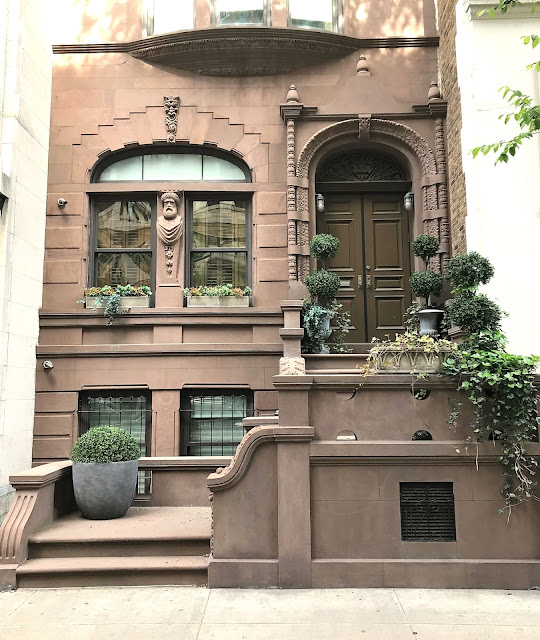 The arched transom over the parlor windows was originally filled with stained glass.
Wilson sold 605 West End Avenue to Richard and Elizabeth Wightman.   The well-to-do Wightman was the principal in Wightman & Co., makers of "suits, gowns and dresses."  The couple had three sons, Richard Jr., William Francis and Frederick Charles; and a daughter Elizabeth.
Richard Jr. was working in his father's firm when the family moved into the new house.  He sailed to Europe each year to investigate new fashion trends, and seems to have been actively involved in the designs of some garments.  In 1890, for instance, he was issued a patent for his "buoyant bathing suit."  The wearer was prevented from drowning by front and back air compartments in the "jacket" of the suit, which was "adapted to be attached to the pantaloons."
It appears that the entire Wightman family was still in their summer home in Old Saybrook, Connecticut, in November 1906.  The house next door was vacant and a sign told potential buyers that the keys were available at 263 West 99th Street.  The realtor's trust in allowing strangers to roam through the property--unheard of today--resulted in problems for the Wightmans.
Walter Titus gave the keys to two men on November 15.  A woman drove them to the West End Avenue house, and waited while they entered.  On the second floor, them managed to get from a window of that house to one in the Wightman residence.  The New-York Tribune deemed the process "an easy matter for them."  The article went on to say, "The robbers then calmly helped themselves."  They made off with jewelry valued at more than $5,000, nearly $150,000 today. 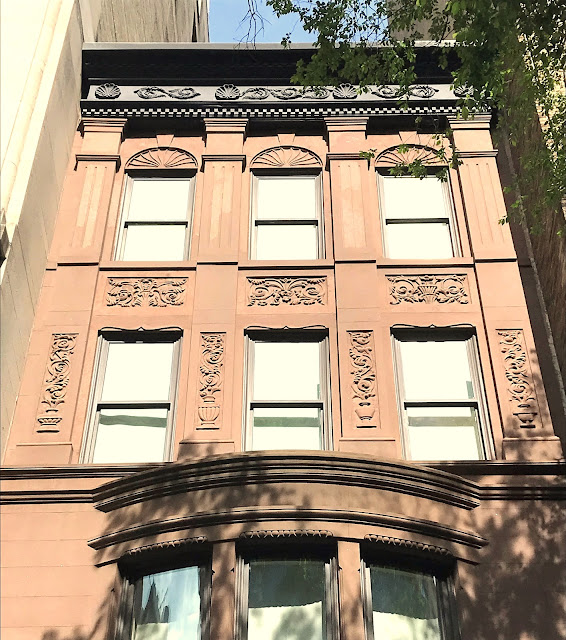 Stylized plants sprout from urns in the carved panels of the third floor.
In 1913 Richard Wightman appears to have retired.  That year he sold his firm in equal shares to the three sons, for $1 each, and he and Elizabeth transferred title to the West End Avenue house to the four children--all of whom still lived there.  Each received one-quarter ownership.  Richard and Elizabeth then moved permanently to their country home.
The siblings continued to live in the house.  During World War I Frederick was a captain in the Army-Navy Air Force, after which he became a member of the State Moving Picture Commission.  In May 1922 he testified against the Big U Film Exchange, Inc. after seeing the film Man to Man at the Lincoln Square Theatre.   The State Moving Picture Commission asserted that the firm "had deliberately failed to make cuts in films as required by the State Board of Censors."
The West End Avenue block had changed by now.  In 1916, 601 through 603 had been demolished and replaced by an Emery Roth designed apartment building.  In July 1922 the Wightman siblings sold 605 West End Avenue to Clemencia De Socarraz De Acosta.   She was no doubt approached by developers three years later, who would erect a Rosario Candela apartment building at 607 through 613.  But she, like the owner of 615 had done, held out. 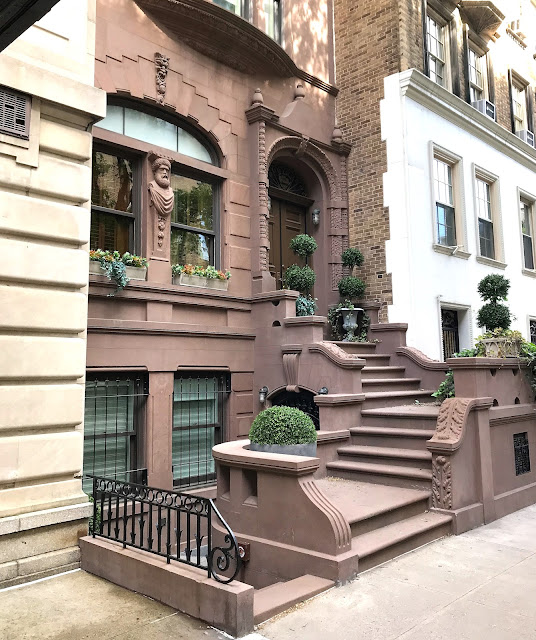 The complex stoop zig-zags up to the entrance, while service stairs turn downward to the English basement.
Although never officially converted to apartments, the  former Wightman house was nonetheless operated as a multi-family home for the rest of the century.  Celia Shapowitz lived here on October 8, 1964, when she was struck by an automobile at 90th Street and Broadway.  The driver, Wallace Holman, sped off and was followed by another driver for eight blocks before he picked up a foot patrolman and continued the chase.
At 79th Street and Amsterdam Avenue Holman was captured and arrested.  (Another witness, Leopold Castillo, who followed on his bicycle, also identified the hit-and-run driver.)  Holman was a bellboy at the Shelton Towers Hotel and had stolen the car from a guest.  Celia, who was 60 years old and unmarried, died at Knickerbocker Hospital from her injuries. 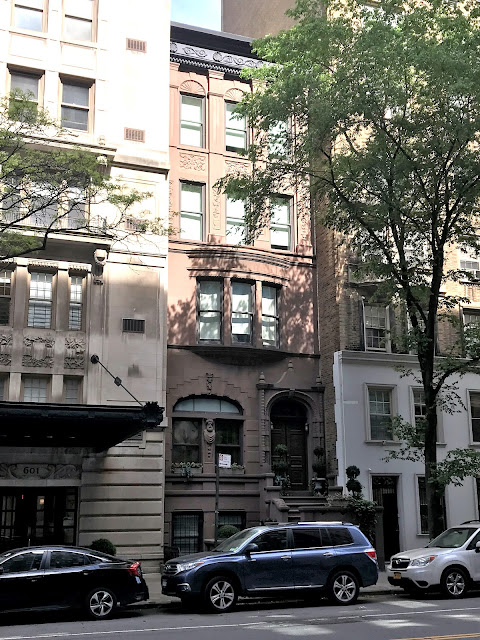 A renovation completed in 2011 returned 605 West End Avenue to a private house.  It and its fraternal twin at 615, the last remnants of the 1888 row, create quaint anachronisms, sandwiched between hulking 20th century apartment buildings.
photographs by the author
many thanks to reader Peter Hirsch for prompting this post
no permission to reuse the content of this blog has been granted to LaptrinhX.com
Posted by Tom Miller at 1:00 AM