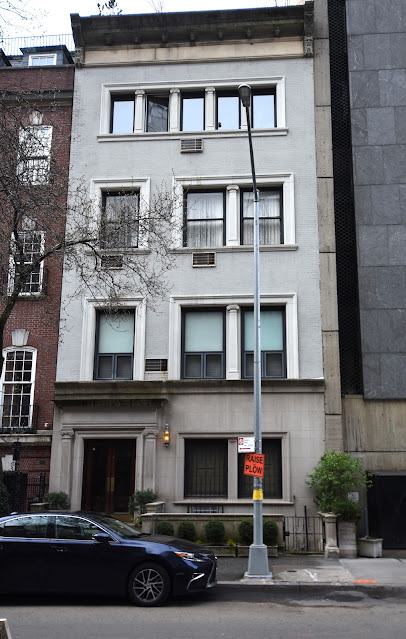 Born on December 22, 1848 in Kassa, Hungary (now part of Slovakia), Arpad Geyza Charles Gerster earned his medical degree from the University of Vienna in 1872.  A year later he arrived in New York, settling in Brooklyn.  During the long ocean voyage he met Anna Barnard Wynne of Cincinnati, and before the ship docked romance had bloomed.  Three years later, in December 1875, they were married.
Gerster was a Renaissance man.  He limited his practice to surgery and was appointed attending surgeon to the German Hospital (later Lenox Hill Hospital) and the Mount Sinai Hospital.  As a professor of surgery in the New York Polyclinic, he stressed the new antibiotic techniques developed by Lord Lister.  He wrote the first textbook on the subject, Rules of Aseptic and Antiseptic Surgery, published in 1888. 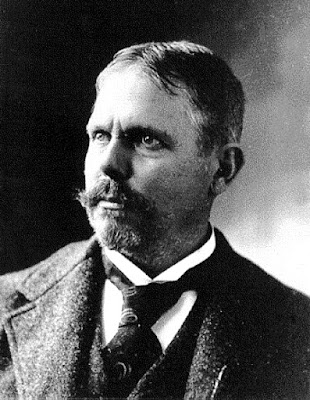 Dr. Arpad Gerster, from the collection of The Museum of Blue Mountain Lake
But his talents went beyond medicine.  He was a accomplished sketch artist, author, and sportsman, as well.  A music lover, Gersted taught himself Italian so he could better understand opera.
In May 1895 Gerster purchased the 25-foot-wide vacant lot at 34 East 75th Street, just east Madison Avenue, from Julia E. Cameron.  The price of the plot, $22,500, reflected the increasingly fashionable tenor of the neighborhood.  The equivalent amount in 2022 would be about $715,000.
Architect John B. Brazier filed plans for a four-story residence the following month.  He projected construction costs at $24,000--more than doubling Gerster's outlay.  The completed house would be fitted with upscale details.  On June 1, 1895 the Real Estate Record & Guide listed:

Notable were the inclusion of an operating room, for Gerster's practice, and the electric bells used to call servants from any part of the house.
While many of the homes in the neighborhood were being designed in the popular Beaux Arts style, Brazier turned to a more sedate neo-Classical design for the Gerster residence.  The off-center double-doored entrance sat within a limestone base.  It was flanked by fluted, Ionic pilasters that reappeared between the grouped windows of the upper floors.  The upper floors were clad in brick.  Brazier's asymmetrical design continued at the second and third floors.  At the fourth, the windows were grouped within a stone frame, each separated by a pilaster.  Oddly enough, the strict neo-Classical design gave way to Romanesque Revival for the cornice, where brackets in the form of "green men" upheld either end, and intermediate modillions took the form of fearsome creatures.

Moving into the the new home with Arpad and Anna was their 14-year-old son, John Carl Arpad Gerster.  While most of their wealthy neighbors summered at fashionable resorts like Newport and Bar Harbor, the Gersters preferred their rustic Camp Oteetiwi, on Big Island in Racquet Lake, New York.  Here in the Adirondack Mountains Gerster relaxed by fishing and sketching.  (In 1912 Gerster became a trustee of the Association for the Protection of the Adirondacks.) 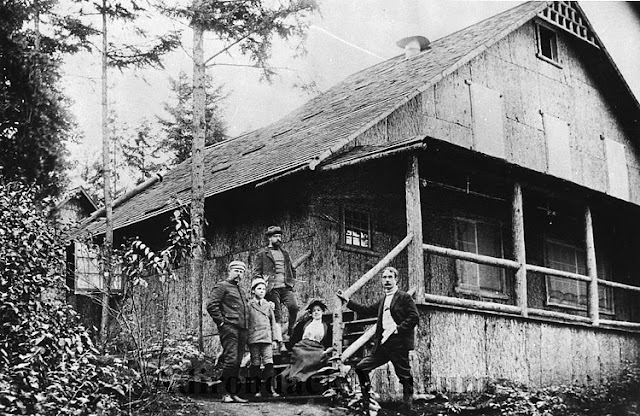 Dr. Gerster and John are at left in this photo taken around 1890.  Anna is on the steps.  from the collection of The Museum of Blue Mountain Lake
Back in New York, Arpad Gerster did not forget his European roots.  He was president of the National Slavonic Societies in 1902.  His reputation was such that his switching political parties in 1908 to vote for Republican Presidential nominee William H. Taft made headlines nationwide.  On October 28, the Honesdale, Pennsylvania newspaper The Citizen ran the headline, "New York's Leading Surgeon, A Stanch [sic] Democrat, Supports Taft," with the sub-headline, "Dr. Gerster, Famous Hungarian, in Swinging to Taft, Will Influence Thousands of Countrymen."
John Gerster followed in his father's professional footsteps, earning his medical degree from Columbia University's College of Physicians and Surgeons in 1905.  He focused on the treatment of cancer and in 1913 assembled a small group in the 75th Street house to form the American Society for the Control of Cancer.  (It would be renamed the American Cancer Society in 1922.)
John's engagement to Alice Fox was announced in 1917.  Their wedding plans were disrupted by America's entrance into World War I in April.  On June 7, the New York Herald reported that the ceremony, scheduled for June 26, had hastily taken place in the bride's home the previous day.  "The bridegroom, who is a member of the medical division of the Officers' Reserve Corps, has been ordered to report for duty at Fort Benjamin Harrison, Ind., at the end of this month." 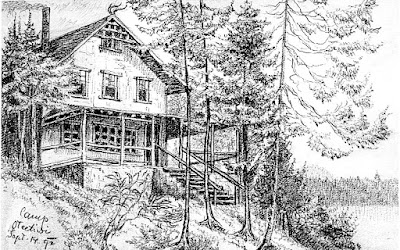 Gerster sketched Camp Oteetiwi in September 1892.
John Gerster's patriotic response to the war did not affect the Government's suspicious view of his father.  German- and Hungarian-born Americans were often clumped together as what was termed Alien Enemies.  Arpad Gerster's importance in the medical community may have saved him from worse ramifications, but nevertheless, on July 12, 1918 The Sun reported that A. Mitchell Palmer, Alien Property Custodian, had reorganized the Transatlantic Trust Company, of which Gerster was a director.  He and four other "alien enemies" were removed from the board.
After a short illness, Dr. Arpad Gerster died in the house on March 11, 1923 at the age of 74.   He left Anna "all his movable and immovable property."  His will contained surprising directions like, "To rebuke the foolish and to show a good example to all, an autopsy shall be held on my remains."  He directed that for his funeral, "no expenditures beyond satisfying plain decency shall be incurred" and "The music at the funeral shall contain the second movement of Johann Sebastian Bach's concerto for two violins and piano in D. minor."  He left explicit directions, including a map and photograph, to the location in the forest near Camp Kwenogaman, Long Lake, New York, for the interment of his cremated remains.
By 1927 the American Cancer Society was using the first floor of the house as its headquarters, while John Gerster, who had moved his family to 18 East 78th Street, rented the upper three floors to Professor Eugene Hugh Byrne of Barnard College.  He would remain well into the 1930's.  The cancer organization would remain at least through 1934.
John and Alice Gerster's daughter, Dorothy Fox Gerster, was married to Thomas Kirby Schmuck, Jr. on August 24, 1938.  The New York Sun reported that the ceremony, "is taking place today in the home of her late grandparents, Dr. and Mrs. Arpad G. Gerster."
At some point John Gerster returned to the 75th Street house, where he died at the age of 92 on May 22, 1974.  After having been in the Gerster family for 79 years, the residence was sold soon afterward.  In 1975 an alteration was completed that resulted in ten apartments.  The configuration lasted until a subsequent remodeling, completed in 1997, created a triplex apartment above the ground floor. 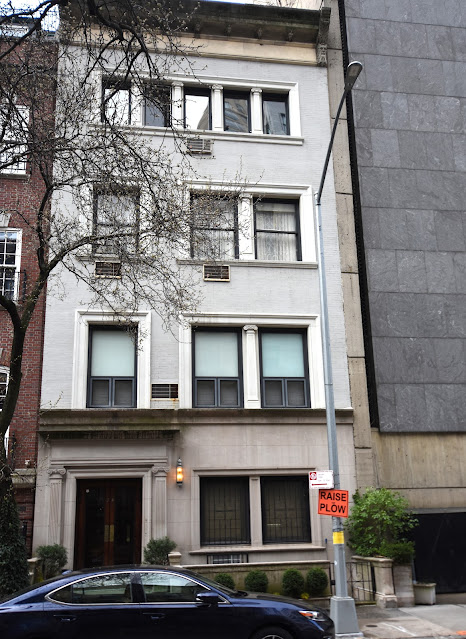 Although the brick has been painted and the windows replaced, the Gerster house is otherwise little changed.
photographs by the author
LaptrinhX.com has no authorization to reuse the content of this blog
Posted by Tom Miller at 1:00 AM