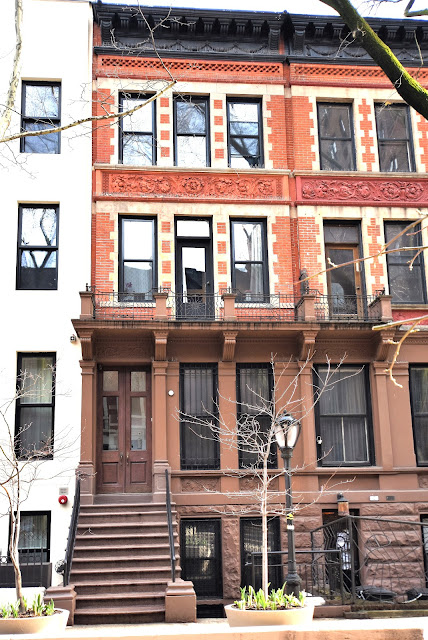 The three houses Gilbert A. Schellenger designed for real estate developer Thomas Auld along West 94th Street, between Central Park West and Columbus Avenue, in 1885 were a mere 16-feet wide.  Their lack of width was made up for in their Victorian charm.  Schellinger's two slightly different designs--one with a full-width balcony at the second floor, the other with smaller version, one bay wide, above the entrance--were configured in an A-B-A pattern.
Among the A designs was 23 West 94th Street.  Like its neighbors, its basement level was clad in rough cut brownstone, the parlor floor in planar stone, and the two upper floors were faced in red brick, their openings framed in limestone quoins.  Vying for attention was the elaborate terra cotta spandrel panel between the second and third floors.  Schellenger splashed the overall Renaissance Revival design with touches of Queen Anne--seen in the sunburst motif iron balcony railing and in the dogtooth brickwork below the pressed metal cornice.  Despite its narrow width, the house was intended for a well-to-do buyer.  The architect's plans, filed on September 4, 1885, projected the construction cost at $555,000 by today's standards.
Auld advertised the "three story and extension private dwellings," touting "cabinet throughout," referring to the high-end hardwood flooring and woodwork.  The family of Sam Heidelsheimer moved into 23 West 94th Street.
Born in German in 1840, Heidelsheimer and his wife, the former Mary Sidenbach, had three children, Irving, Helen and Blanche.  It appears that Mary's brother, Milton Sidenbach, lived with the family, as well.  He died at the age of 25 on July 22, 1890, and his funeral was held in the house two days later.
The Heidelsheimers sold the house to Julia L. and Daniel Butterfield in March 1897.  The couple was well known in social, political and military circles.
Eleven years earlier, on September 26, 1886, the New-York Tribune had reported, "News of another wedding on this day, as far away as London, greatly interested New-Yorkers.  It was that of General Daniel Butterfield and Mrs. Julia L. James...which was celebrated in the light of the beautiful old stained glass window of St. Margaret's, Westminster, where Sir Walter Raleigh was buried."  General Butterfield had distinguished himself throughout the Civil War.  During the administration of President Ulysses S. Grant, Butterfield was Assistant Treasurer of the United States. General Daniel Butterfield, from the collection of the Library of Congress 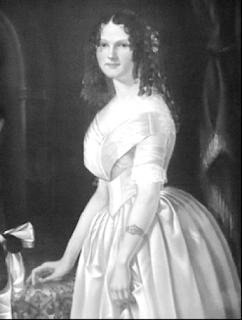 Julia Lorillard James in 1861, prior to her marriage to Butterfield. from the collection of the Julia L. Butterfield memorial Library.
Julia Lorillard Stafford had married her first husband, stockbroker Frederick Plummer James, at the age of 18 in 1841.  He died in 1884.  They had built Craigside, the magnificent stone country house in Cold Spring, New York, now used by the Butterfields.  Four years before purchasing the West 94th Street house, the couple had hosted a Russian Imperial Grand Duke at Craigside.  In appreciation, the Tsar presented Julia with an elaborately decorated sleigh. 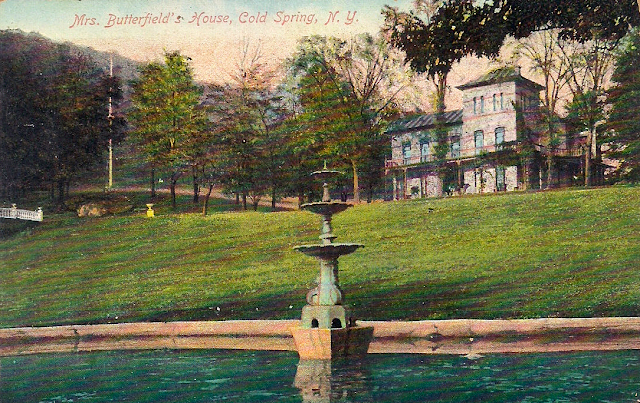 A turn-of-the-century, hand-tinted postcard depicted Craigside.
The Butterfields' ownership of 23 West 94th Street would be relatively short-lived.  They sold it on August 7, 1900 to Edward M. L. Ehlers for $22,000, just under $700,000 in today's money.  General Butterfield died at Craigside the following year, on July 17.
Living with Ehler and his wife, the former Henrietta Howard Cargill, was their son, Dr. Edward C. Ehler.  The Butterfields and the Ehlers had a close, personal relationship.  Edward M. L. Ehler was a colonel during the Civil War, and Julia Butterfield named him as one of the three executors of her will.
Ehler was born in Denmark on January 31, 1840.  He served under Daniel Butterfield at the battles of Fredericksburg and Antietam.  Following the war, Ehler joined the Mutual Reserve Fund Life Association.  In January 1897 he was appointed a council officer of the firm, and in 1900 elected a director.  In 1882 he had taken the post of Secretary of the Grand Lodge of Freemasons.  He retired from Mutual Reserve Fund Life in 1907, while retaining his position with the Lodge.
Henrietta Ehlers died on December 30, 1907.   Ehler and his son continued to live in the 94th Street house.  The Sun remarked that the senior Ehler was "an extremely genial man and was much sough after as an after dinner speaker.  He was an orator of much power."
On May 28, 1917 Edward M. L. Ehlers died in the house at the age of 78.  The Sun noted, "He was one of the best known Masons in the world."  His funeral was held in the Grand Lodge Room of the Masonic Hall on West 24th Street.
The following year Dr. Edward C. Ehlers and his wife, the former Mary Ann Rogers, moved to Essex Falls, New Jersey.  He retained possession of the West 94th Street house, leasing it that year to actress Madame Pilar-Morin. 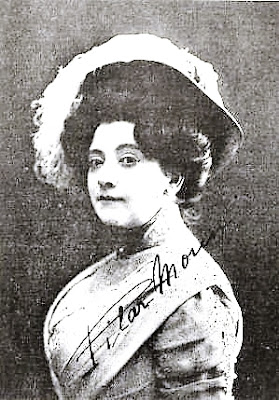 Madame Pilar-Morin, The Moving Picture World, January 22, 1910 (copyright expired)
Born in Barcelona, Spain, Madame Pilar-Morin had appeared on stage in London and New York, and was a silent film actress for Edison Company in 1909 and 1910, starring in eight films.  She then turned to "silent drama," or pantomime.  She defended her art to a reporter from The Billboard who interviewed her in "her studio at 23 West 94th Street" in April 1920.  "What is the difference between my art and the art of the screen?" she asked.
Ehlers next leased the house to Spanish poet Joaquin Casanovas.  He welcomed a notable house guest in 1922.  On November 14, the New York Herald reported, "Marcos Coll, sculptor, of Barcelona, arrived yesterday by the Royal Spanish Mail liner Montserrat with a life size marble statue, 'The Poem of Peace,' symbolizing American manhood and womanhood, he says."  The statue would be exhibited at the Metropolitan Museum of Art.  The following year, Casanovas published the book, Marcos Coll's "Poem Of Peace," in which he called the artwork, "a great masterpiece of sculpture which expresses the American message of democracy."
In October 1925, Dr. Ehler sold the house to real estate operators Nathan Slater and L. M. Stone.  They held it for three years, before selling it to Margaret Anne Marshall.  She agreed to wait for the tenant's five-year lease to expire before moving in.
The narrow house continued as a single-family house until 1984, when a renovation resulted in a duplex apartment in the basement and parlor floor, and two apartments each on the upper floors. 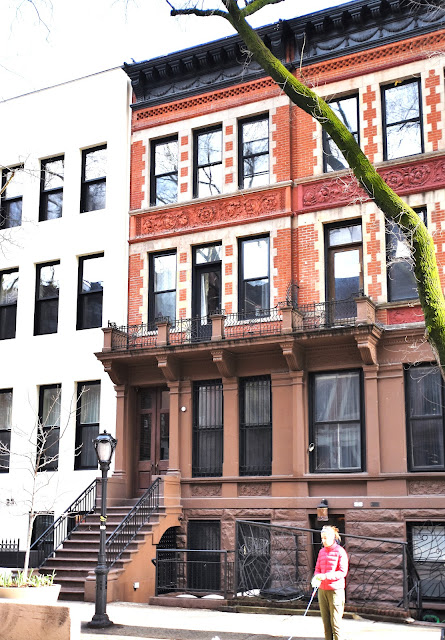 Although it appears that little, if anything, remains of Gilbert A. Schellinger's 1885 interior detailing, the exterior is, happily, greatly intact.
photographs by the author
no permission to reuse the content of this blog has been granted to LaptrinhX.com
Posted by Tom Miller at 1:00 AM