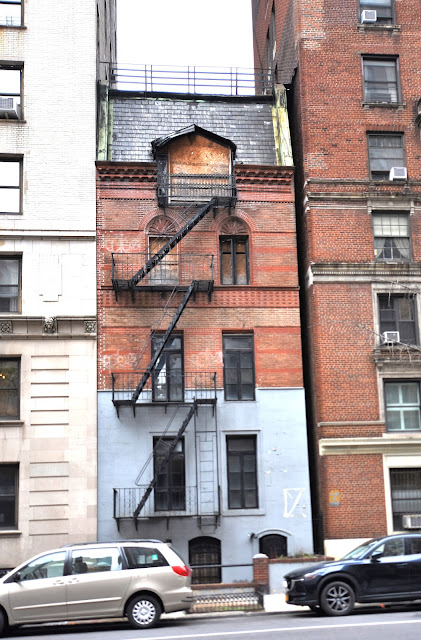 Hints of the original appearance--the striped brickwork and shells over the top floor windows--suggest the former upscale nature of the house.
In 1885 builder George W. Rogers commissioned the architectural firm of McKim, Mead & White to design six houses that would wrap the southwest corner of West End Avenue and 83rd Street.  West End Avenue was developing as an exclusive residential thoroughfare lined with grand mansions.  Completed in 1886, four of the homes faced 83rd Street and two, including the showstopper at the corner, faced West End Avenue.  That house was separated from what seems to have been the step-sister of the group by a walled garden.  Without the Flemish gables, turrets and balconies that distinguished the others, 471 West End Avenue was, at best, the least showiest. 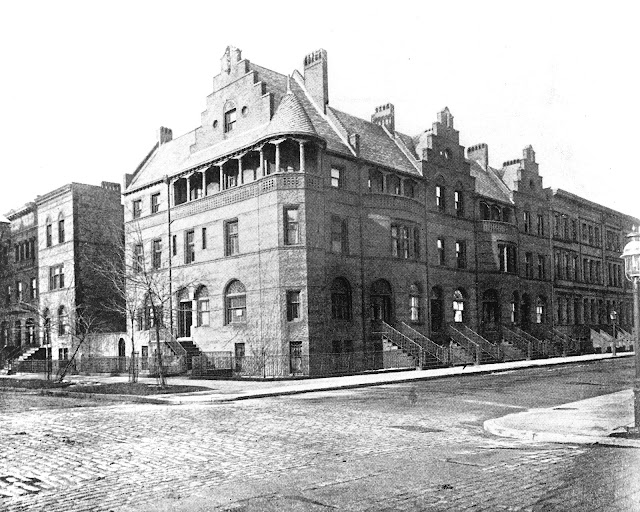 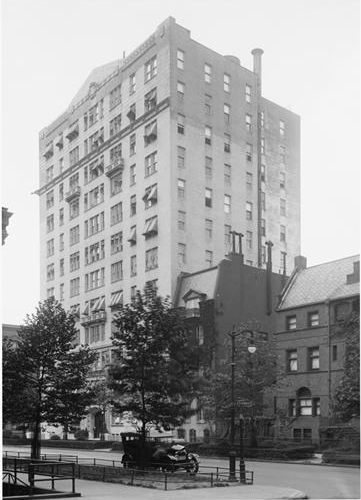 The changes are evident in this photo, taken not longer after the renovations.  photo by Wurts Bros., from the collection of the Museum of the city of New York.
Rothschild sold the house to vocal instructor Dudley Buck in 1922 for $75,000--around $1.16 million today.  In its October issue that year, The Musical Observer wrote, "Dudley Buck, the well-known New York singing teacher, has moved into new quarters, principally owing to the fact that his former studios proved inadequate to the growing demands of his classes."  The article explained that now "his assistants could have studios under the same roof with him and...he could provide the necessary personal touch to every student whether studying with him directly or not." 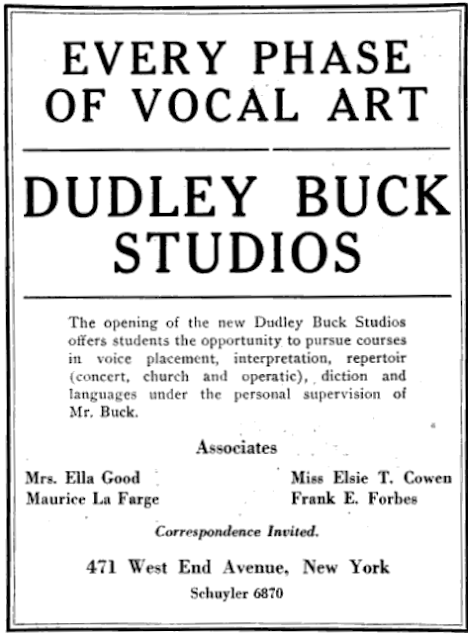 The Musical Observer, October 1922 (copyright expired)
Buck offered rooms not only to his associates.  An advertisement in the New York Herald in September 1922 offered, "Luxurious bachelor quarters in private house equipped with automatic elevator; one or two rooms, private bath, handsomely furnished."
Buck was almost assuredly approached in 1923 by the developers who demolished the rest of the McKim, Mead & White grouping.  But for some reason, he held out.  Because of the garden between 471 West End Avenue and the corner house, the razing of the house next door had no structural effects. 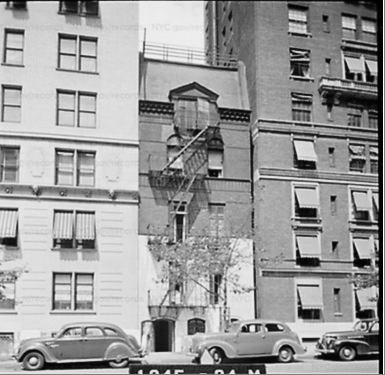 In 1941 the lower floors were either painted or stuccoed.  via the NYC Dept of Records & Information Services.
Among his Dudley's tenants in 1923 was rare book collector and dealer Gabriel Wells.  He had come to America from his native Hungary in 1894, "penniless and ignorant of English," according to the Watertown Daily Standard.  By the time he moved into 471 West End Avenue he had come a long way.  He was in Paris in the summer of 1925 when he heard of the impending demolition of the house in which Balzac had lived and worked from 1842 to 1848.  It had been maintained as a house museum, the Muse Balzac, by the Societe Honore de Balzac.  But the society had run out of funds.  The Watertown Daily Standard reported that Wells "learned of the danger to the house and subscribed 50,000 francs to buy the building, at the same time informing the society that it could draw upon him for a larger sum if necessary."
Dudley Buck sold the house in November 1929 to Harold A. Foster, who resold it seven years later to the Esjol Realty Corporation.  The New York Times reported, "changes planned by the new owner include the construction of a physician's apartment with private street entrance.  The house will have one and two room apartments with kitchenettes, new baths and a three-room suite with roof terrace."
Tenants throughout the succeeding decades continued to be middle- and upper-middle class, like David E. Glasser, a graduate of Columbia University's School of Architecture, who lived here in 1961.
A few years later, 471 West End Avenue was home to the Agudas Israel World Organization.  On January 8, 1967 it held an open house of its newly renovated apartments.  The notice for the event was entitled "Apartments for Victims of Nazi Persecution."  Applicants could sign up for 1-1/2 and 2-1/2 room spaces. 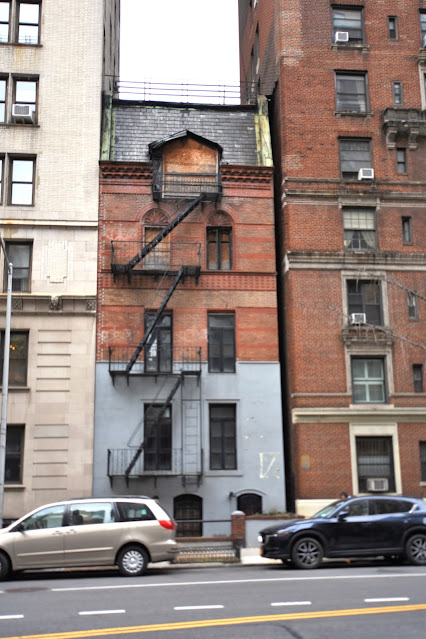 In 1999 the house was purchased by real estate investor Rod Hickey, who initiated façade repair in 2003.  On November 9, The New York Times columnist Christopher Gray remarked, "Now the building excites little curiosity from the street, and looks like any old raggle-taggle converted row house with rental apartments."  A fire in 2013 tore through the interior of the vintage residence, greatly damaging the gable.  It was placed on the market in 2016 for just under $10 million. 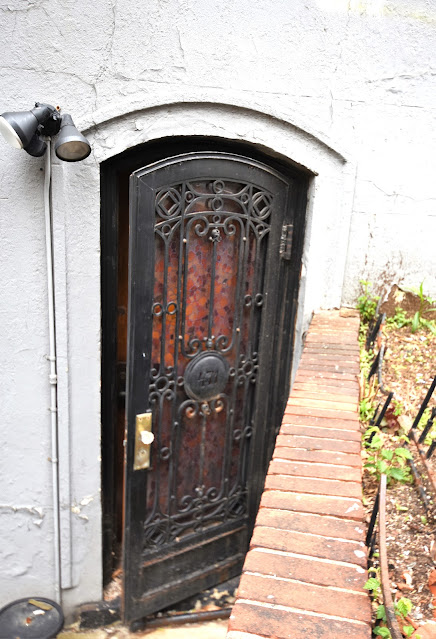 The original, ornately-grilled service door survives.
Squeezed in between two apartment houses, the once-proud relic looks rather forlorn and out of place, today.
photograph by the author
no permission to reuse the content of this blog has been granted to LaptrinhX.com
Posted by Tom Miller at 1:00 AM