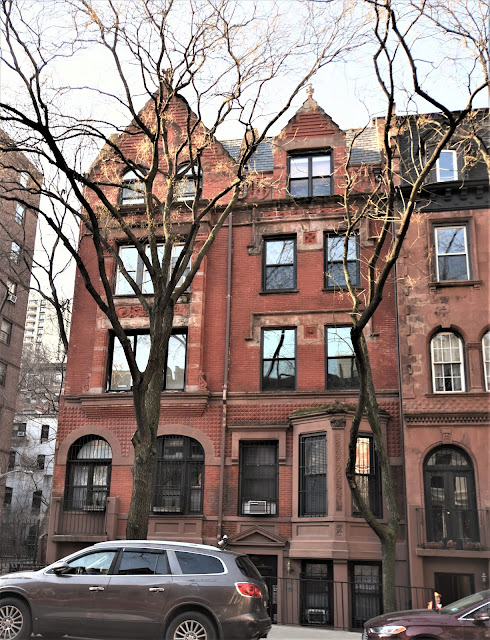 In January 1886, Benjamin F. Romaine bought a 220-foot-long stretch of land from John J. Brown that included a three-story wooden house, most likely a farmhouse.  The undeveloped setting along West 94th Street between Ninth and Tenth Avenues (later renamed Columbus and Amsterdam Avenues) was  evidenced in the deed which noted, "north side [of]  Apthorpe's Lane."  That east-west carriage road had accessed the 200-acre Charles Ward Apthorpe estate along the Hudson River in the 18th century, and ran through the middle of the blocks that are today 93rd and 94th Streets.
But change was most definitely coming to the area, as evidenced by the price Romaine paid for the parcel.  The $58,000 price tag would equal about $1.65 million today.  He was already making a mark on the developing Upper West Side, seemingly always working with architect Auguste Namur.
Pierre Auguste Namur was born in Luxembourg in 1837 and graduated as an engineer from the Ecole Centrale des Arts et Manufactures in Paris in 1855.  His work as an engineer was interrupted by the Franco-Prussian War.  According to a family member, he was captured and sentenced to ten years of hard labor by the French.  Rescued by the Germans, he escaped to America in 1873.  In America, it does not appear that he ever used his first name.  After working as a civil engineer for several years, he was listed as an architect in 1879.
He would not file plans for Romaine's project until April 1887.  They called for seven four-story "brick dwellings with stone and terra cotta trimmings."  Each of the 19-foot-wide homes would cost the equivalent of $395,000 today to construct.
Completed in the summer of 1888, they were designed in the newly-popular Queen Anne style.  The two models were configured in an A-B-A-B-A-B-A pattern.   The "A" houses, of which 148 was an example, featured a sharply angled bay at the parlor level.  The paired windows of the second and third floors shared a common stone lintel with a square-headed drip molding more expected in a Gothic Revival design.  Namur reintroduced Queen Anne with a single large terra cotta tile within each lintel.  The slate shingled attic level was fronted by a parapet and tall dormer.
The "B" designs, including 146 West 94th Street, replaced first floor oriel with a large arched window, nearly the width of the parlor inside.  It and the arched entrance wore stone eyebrows.  A quilting of terra cotta tiles above the parlor floor openings spread along the row, visually uniting the houses.  The openings of the second and third floors of the "B" houses were set within a projecting brick-and-stone frame.  Here, too, Namur stepped away from Queen Anne with Renaissance Revival style terra cotta ornaments.  A full-width brick gable with two arched windows and a terra cotta rondel fronted the attic. 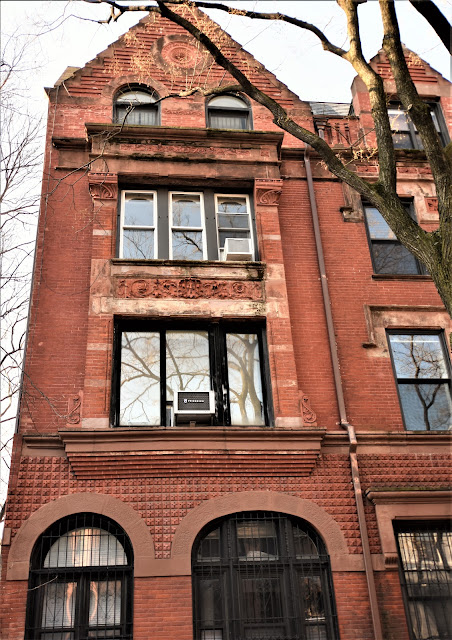 Romaine did not sell the houses, but leased them.  His advertisement on September 20, 1888 read, "To Let--136 to 148 West Ninety-Fourth St--4 story and basement; built for investment; near L station."  Interestingly, four years later when both 146 and 148 became available, Romaine placed slightly different rents on them--charging the equivalent today of $4,280 per month for 146, and $4,400 per month for 148.
Most likely because Romaine preferred to rent and not sell, both houses saw a succession of residents.  In 1894, William D. Weeks and his family lived in 146.  Like many New Yorkers at the time, Weeks had become an enthusiast of the bicycling fad.  It was a hobby that could be enjoyed only by the well-to-d0.  The average cost of a bicycle in 1894 would top $2,000 in today's money.  But on November 1, Weeks would have to look for a new bike.
On the prior evening there was a "bicycle parade" on Fifth Avenue along Madison Square.   The Morning Telegraph reported that a cab driver named Carroll "was driving west through Twenty-sixth street, toward Fifth avenue, at 8:30 last night, when suddenly there was a smashup.  Driver, horse, carriage, bikes and bicycle riders were all in the mix."
Among the three bicyclists extracted from the tangle was William D. Weeks.  Carroll was arrested, but he brought three witnesses with him to confirm his innocence.  "He said the three complainants, who were waiting for the bicycle parade to put in an appearance, were scorching and ran into him."  The term referred to street racing, which was, of course, illegal and dangerous.  The police sergeant was not especially sympathetic.  Although he let Carroll go, he said that "the three victims should sue the liveryman to recover the cost of their wheels."
Living next door at 148 West 94th Street was the Louis Friedman family.  Born in German, Friedman was a partner with Morris Deutsch in the fur business, Friedman & Deutsch.  His marriage to Cecilia Eger--one of a Jewish man and non-Jewish woman--was unusual at best.  The couple had two daughters, Ella and Clara.  Living with the family was Louis's unmarried sister.  Florence D. Friedman was a vice president of the Council of Jewish Women.
Ella was an artist.  She may have been conflicted by the differing religious views of her parents, and was affiliated with the non-denominational Society for Ethical Culture.  Not quick to wed, when Ella married Julius Oppenheimer on on March 23, 1903, she was 34 years old.  Six years later, now widowed, Cecilia Friedman left 148 West 94th Street and moved into the Oppenheimer apartment.
In the meantime, at the turn of the century 146 West 94th Street was being operated as a boarding house.  Among the residents was Dr. Allan Blair Bonar, former resident physician at the Incurable Hospital on Blackwell's Island.   He left the 94th Street house following his marriage to Carolina A. Busick on September 5, 1901.
Another boarder in 1900 was Jacob Gabow, a diamond setter for Tiffany & Co.   Born in Russia, he had met his wife, Annie Goldstein, there while working for her father's diamond-setting business.  The couple came to America in 1890.  According to The Morning Telegraph, in 1894 Jacob "sent her home on a visit, saying he would send her money to come back to America, but never did so."   Around October 10, 1900, Annie and her father arrived in New York, looking for her missing husband.  The newspaper said, "they traced Mr. Gabow to 146 West Ninety-fourth street."  Absence, it seems, had not made Jacob's heart grow fonder.
On October 23, a judge ordered him to pay Annie $10 from his $75 per week salary.  He refused and was incarcerated.  The Morning Telegraph explained, "Unless the diamond setter gives his bond or deposits the cash with the Charities Department he will remain in jail."
Boarding in 146 West 94th Street in 1902 were Grace Povey, an unmarried piano teacher; artist Drew A. Farnsworth; and the less-respectable Sidney H. Carter.
On May 5, 1903 The New York Times titled an article "Nest of Poolrooms Under One Roof" and reported, "With sledges and hammers a raid was made yesterday afternoon on what the police say was the biggest and finest poolroom the city has known in years."  As used in this case, the term did not refer to the billiards game, but to illegal horse betting.  The astounding operation at 35 West 27th Street, described as "a maze of blind stairways, hallways and concealed doors," had been carefully planned to deceive outsiders.
Passing through a laundry, police overcame a myriad of obstacles, including fake doors that opened onto brick walls, and dead end hallways.  There were heavily fortified and "handsomely furnished" rooms on each floor, outfitted with blackboards, telephones, racing sheets and "other poolroom paraphernalia."  After battering a doorway on the second floor, they found Sidney H. Carter.  "He seemed to be in charge of the place," reported The New York Times.  "Carter denied he had anything to do with the running of the rooms, but was locked up."
In 1915 Benjamin F. Romaine leased the two houses to Charles Griffin, whose wife, Susan Griffin, now operated both as boarding houses.  At some point after 1917, Griffin purchased the properties.  When he sold 148 West 94th Street in August 1926, The New York Sun noted that the new owner "will alter and occupy it." 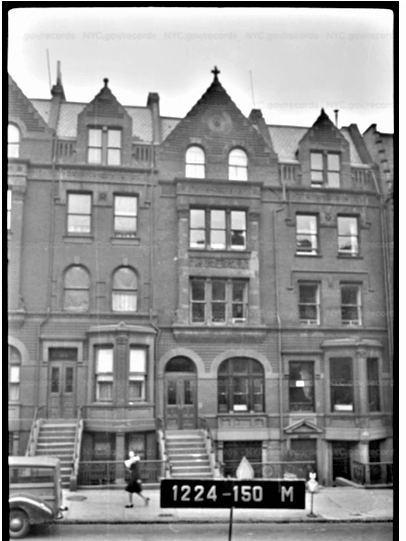 With its stoop removed, 148 West 94th Street (right) was home to a school.  via NYC Dept of Records & Information Services
Part of the alteration was the removal of the stoop.  The house was converted to the Birch Wathen School, with an apartment on the top floor.  The private institution had been founded by Louise Birch and Edith Wathen five years earlier.  In 1930 the school expanded into 146 West 94th Street and eight years later it purchased that building from George B. Griffin, presumably the son of Charles and Susan. 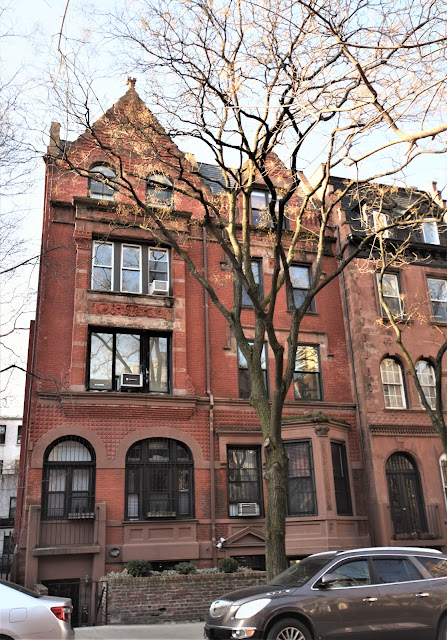 The school remained until 1962, when it moved into the former Herbert N. Straus mansion at 9 East 71st Street (later home to billionaire financier Jeffrey E. Epstein).   The renovation and conversion of 146 West 94th Street to apartments that year most likely involved the removal of the stoop.  An alteration to  one apartment per floor next door occurred in 1965.  That same year the five other houses in Auguste Namur's 1888 row were demolished for an apartment building.
photographs by the author
LaptrinhX.com has no authorization to reuse the content of this blog
Posted by Tom Miller at 1:32 AM