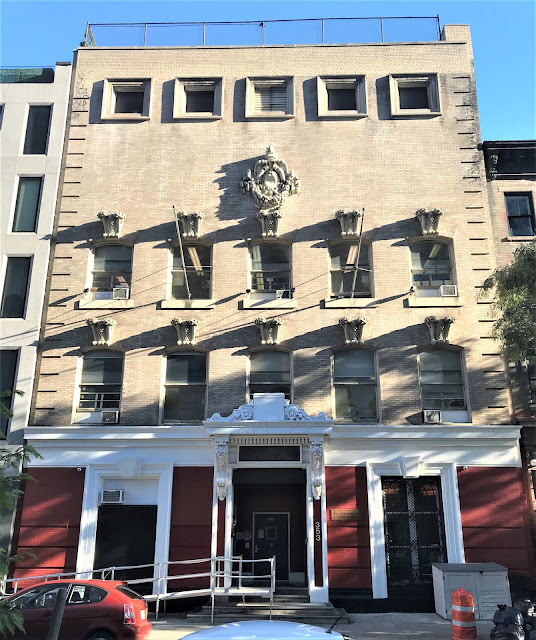 While still in his 20's, Dr. Theodore G. White was a professor of paleontology at Columbia University.  He was also a Sunday school teacher in Chelsea and through that work developed a concern for the boys in the neighborhood.  In 1901 he established a club in a rented stable on West 17th Street, called Gordon House.  (The name paid honor to British Army officer Charles George Gordon, who had devoted his retirement years to charity work, especially concerning homeless boys.)
Upon his father's death he had inherited a significant fortune.   In 1900, according to the New-York Tribune, "he resigned his place at Columbia in order to devote his time to philanthropic work among boys."  But White's strenuous efforts for the neighborhood youth, according to The Sun, led to his death on July 7, 1901 at the age of 29.  "He worked so hard that his health broke down and he died soon after the opening of the house," said the article.
He left a part of his estate for the continuance of Gordon House, and the rest to his nephew, Theodore B. Starr and his sons, Louis M. and Howard W. Starr.  The Starrs donated their inheritances to Gordon House and laid plans for a proper clubhouse.
On April 19, 1902 Theodore Starr purchased the two three-story houses at 353 and 355 West 17th Street.  Four months later architect John H. Duncan filed plans for a "five-story brick club house" to cost $50,000--just over $1.5 million today.
The following year, on November 16, 1903, The Sun remarked "Although yet uncompleted, the new structure is imposing...The interior is considered ideal by settlement experts."  Faced in beige brick and trimmed in limestone, the Starrs saved money by limiting the amount of expensive stone.  The rustication of the base, for instance, was achieved by recessed bands in the brick, as was the suggestion of quoins up the sides of the upper portion.
Where he did use stone, Duncan made it count.  The entrance was surmounted by a substantial cornice, supported on heavy foliate brackets, topped by a pedestal flanked by ornate volutes.  The brick lintels of the second and third floor openings were decorated with overblown keystones carved in a fishscale pattern, wearing leafy Caesar-like crowns.  An elaborate cartouche, surrounded by carved ribbons and fruity swags, clung to the façade above the third floor.  It was surmounted by a flaming torch, a symbol of learning. 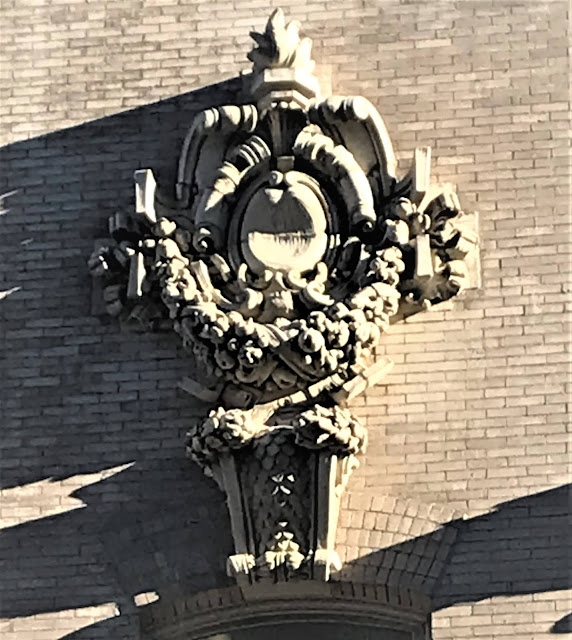 The architrave windows of the top floor appear oddly undersized from the street.  Somewhat interfering with Duncan's design, they were the result of that floor's purpose.  Inside was a gymnasium, so the windows were reduced in size and placed high up to provide additional wall space.  On the exterior, they were flanked by massive brackets that upheld the cornice and decorative balustrade. 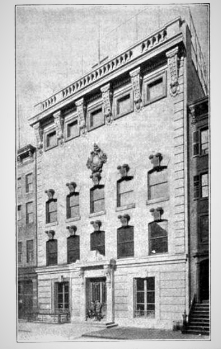 Electrical World, September 6, 1919 (copyright expired)
As construction neared completion on January 2, 1904, the New-York Tribune interviewed William Anthony Clark, the "head worker" of Gordon House.  He explained that the design of the interior rooms followed a division of age of the members.
"The basement, which is divided into a pool room, bowling alley and smoking room, is set apart for the men, except twice a week, when boys over eighteen are allowed to go in," he said.  The Sun added that the men's club room, or smoking room, was "finished in the old Flemish style."
The ground floor was devoted to "young men between sixteen and twenty-one."  Also on the main floor were the headworker's office, and the library.  The New-York Tribune described the library as "attractive enough to attract almost any boy from the streets.  The walls are done in red burlap, and around the four sides are low cases of Flemish oak filled with hundreds of the books that boys like."
On the second story were shop rooms where "boys under sixteen years of age are put at some definite work--woodcarving, clay modelling, willow weaving, cabinet making, or Venetian iron work.  For each of these handicrafts a room has been set apart," reported the New-York Tribune.
Clark was quick to point out that while boys were trained in the manual arts, this was not a trade school.  "The especial purpose of these classes in Gordon House is the inculcation of good habits," he said, adding, "A music department is also a plan for the immediate future.  Besides the classes there are to be lectures on various educational topics."
The third floor held quarters for Clark and his mother, as well as "several part-time college men" who "assisted in the conduct of the house."  On that level were also a large room for common use and the director's study.
The top floor gymnasium, 50 by 80 feet, focused on "a maximum of playing space including a basketball court and "everything necessary for gymnastic exercises."  An iron cage, 18 feet above the roof allowed for basketball and other outdoor games.  The Sun noted, "in winter this outdoor space is to be sprayed with water to provide a skating rink."
Unlike in settlement houses, Gordon House members paid dues.  Boys from 10 to 16 years old paid $2 per year, those from 16 to 21 paid $3, and men paid $5.  (The adults were paying the equivalent of $150 per year in today's money.)  Additionally, the use of the pool tables and bowling alleys came with a charge.  The Sun explained, "the dues and charges [are] designed to remove the imputation of the house being a charitable enterprise."  The New-York Tribune took away a different perspective.  The dues, it said, "however slight...teach the boy not to be a 'sponger.'"
Surprisingly, following Theodore Starr's death in 1907 his sons closed Gordon House.  The building was purchased by the New York Telephone Club.  As the name suggests, the men's social club was formed for employees of the Bell Telephone Company.  The pool room, bowling alleys, gymnasium, smoking room and meeting room were perfect for the group.  The Electrical World called it "a fully equipped clubhouse" where members could conduct "entertainments and other meetings on a large scale, both indoors and outdoors."
The bowling alleys were an especially popular feature.  On May 16, 1914 Telegraph and Telephone Age reported on "Bowling by Telephone."  The New York and Buffalo Telephone Clubs had played on April 18 here.  The article noted, "Long-distance telephone circuits were established between New York and Buffalo, and the scores were transmitted as each player completed a frame."
And in its April 1915 issue, Western Electric News announced, "A bowling match with the New York Telephone Company has been arranged for Wednesday evening, April 7th, at the New York Telephone Club...We want a large crowd of rooters to support the Western Electric team."
In September 1919 the New York Telephone Club merged with the Telephone Society of New York to become the Telephone Society, Inc., "in order to afford all male employees of the Bell system in and around New York a social center," as reported in Electrical World.
Females were allowed into the clubhouse on special occasions.  Such was the case on May 3, 1921 when "an informal dance" was held here.  The price of admission was 50 cents and World Wide Wireless urged, "Come prepared to dance and enjoy yourself."
The Telephone Society remained in the building through 1930.  On January 28, 1931 The New York Times entitled an article, "New York Archdiocese Gets Old Athletic Centre of Telephone Company in 17th Street."   The Catholic Boys' Club of the Archdiocese of New York had leased the building that, the article explained, "is equipped for athletics and will be used as the headquarters of the Catholic Boys' Clubs."
The boys-only status changed in the spring of 1937.  On March 11 the New York Post reported, "The new Manhattan Center of the Catholic Youth Organization at 353 West Seventeenth Street, was dedicated last night."
The organization now provided services to both boys and girls.  A month later, a class in "elementary baby care" was offered to teenaged girls by nurses from St. Vincent's Hospital.  On April 12 The new York Times reported, "The class was composed of eight girls between the ages of 12 and 19."  They were taught using actual babies, "lent to the center for the occasion by their mothers." 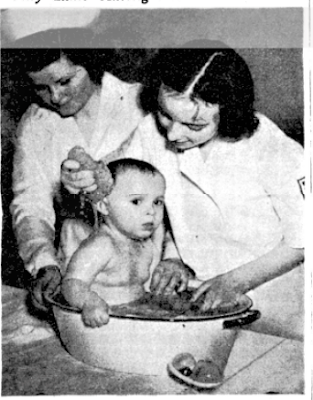 Teenaged girls learn the fundamentals of baby care in 1937.  The New York Times, April 12, 1937
One of the annual events was an art show.  Winning first prize for his portrait of Fiorella La Guardia in November 1937 was Carmine Angelo Pluchino," described by The New York Times as a "12-year-old genre painter (the Bronx scene) and portraitist.  He is a rosy-cheeked boy with a soft expression about his eyes, son of a WPA rockman."  The article noted that "Mayor La Guardia never sat for Carmine...Carmine copied it from the newspapers."  The budding artist's prize was a box of water colors and brushes.
On December 8, 1944 the Catholic Youth Organization boxing center was dedicated in the building in memory of Bill Brown.  For many years a director of the group, he had also been a State Boxing Commissioner.
While the other activities of the Catholic Youth Organization continued on as normal, for many youths the boxing center would become a major focus.  That was reflected in 1960 when, on August 12, the Daily News reported, "The United States Olympic boxers will stage their final drill tomorrow afternoon, 3 to 5 o'clock at the CYO gym, 353 West 17th street.  The 10-man team leaves for Rome on Monday."
The following year a group of parents advocating for their special needs children founded the Lorge School.  The facility, which provides a special education program to emotionally disturbed and learning disabled students, continues in the former Gordon House structure. 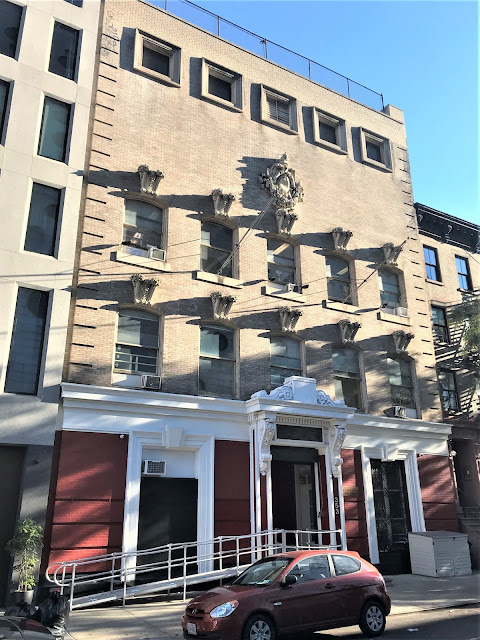 The building was altered in the mid-1970's and it was possibly at this time that the cornice, with its striking brackets and balustrade, was removed.  The result was a spartan look more appropriate to a prison building.  The brick and limestone of the ground floor have, sadly, been painted.
photographs by the author
no permission to reuse the content of this blog has been granted to LaptrinhX.com
many thanks for reader Michael Kane for prompting this post.
Posted by Tom Miller at 1:10 AM