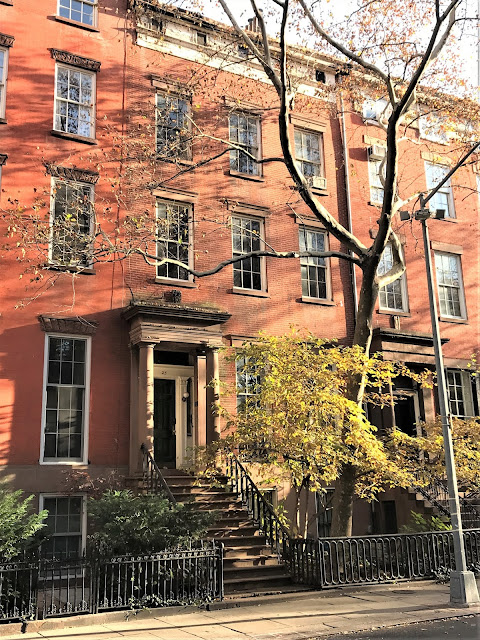 In 1837 wealthy merchant Samuel Shaw Howland lived in the elegant mansion at 12 Washington Square North, on the corner of Fifth Avenue.   That year James DePeyster Ogden sold him the leasehold on the vacant lot at 25 Washington Square North.  The land, as was with case with Howland's house, was the property of the Sailor's Snug Harbor.  The leasehold came with the covenant that a dwelling be erected by 1840.  It appears he and his son-in-law, George B. Dorr (who was married to Joanna Howland), cooperated in that project.  The upscale residence, completed in 1839, was taxed to Dorr, but both men managed its leasing.

Given the matching roofline and similar elements, it is possible that it was designed by the architect responsible for 24 Washington Square North, completed two years earlier.  The Greek Revival structure, faced in red brick above the brownstone basement, rose three and a half stories.  A Doric portico sheltered the entrance where the elegant doorway was framed by palmetto-topped pilasters, narrow sidelights and a gracefully leaded transom.
Interestingly, the Dorrs, who had been living with the Howlands in 12 Washington Square North, did not move into this house, but into 26 Washington Square North next door, completed the same year by James DePeyster Ogden.  Instead, Howland and Dorr leased No. 25.  For some reason, their first tenant left their furnishings behind (possibly there was possibly death involved).  The advertisement in the Morning Courier and New-York Enquirer in 1842 read:

To Let--The house No. 25 Washington square.  It is nearly new, replete with every convenience for a large family, and in perfect order.  It is one of the most desirable situations in the city.  The furniture, which is nearly new and made in the most fashionable style, may be had with the house on reasonable terms, if desired.  Can be examined at any time during the day.  For further particulars, please apply to S. S. Howland, No. 12 Washington Square, or George B. Dorr, No. 20 Exchange Place. 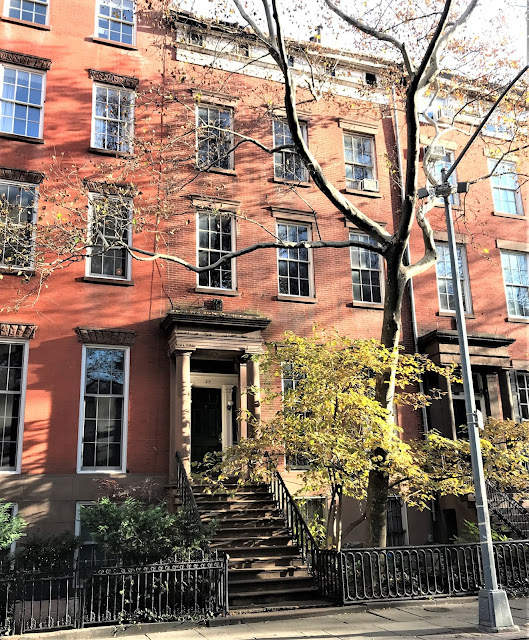 Today there are still just four apartments in the former mansion.  The gentile residence, from the exterior, looks almost no different today than when the Sieberts changed out the ironwork in the first decades after the Civil War.
photographs by the author
LaptrinhX.com has no authorization to reuse the content of this blog
Posted by Tom Miller at 1:30 AM