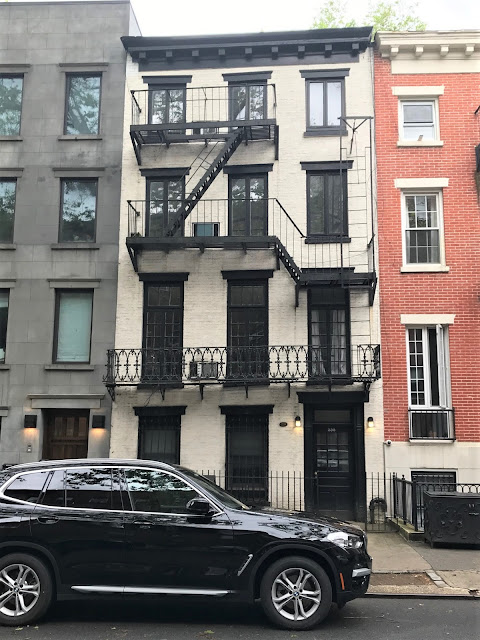 It appears that working for Felix and Bridget C. Duffy was not always pleasant.   Their cook had apparently had enough in December 1853 and took a swipe at her employers in her advertisement looking for a new job.

Wanted--By a very respectable woman, a situation as plain cook or to do general housework in a small family; can wash and iron.  Wages not so much an object as a good home.

A few months later the Duffy's chambermaid and laundress was seeking a job, and in November 1854 the woman who had replaced the cook was looking to move on.
Felix Duffy was born in County Longford, Ireland around 1795.  He owned a construction business and it is almost certain the he built the family's home at 192 East 19th Street (later renumbered 338) between First and Second Avenues.  At the time of the servant problem he owned approximately half of the block.
The Duffy house was designed in the Anglo-Italianate style and forewent the high stoop so popular at the time.  Three bays wide and four stories tall, it was faced in running bond red brick.  Three sets of French windows on the second floor opened onto a lacy full-width cast-iron balcony.
In 1856 the population within the house was increased with the birth of Catherine E. Duffy.  Nevertheless, there was sufficient space to offer a room to rent that year "for a single gentleman."
Duffy was active in politics and the year his daughter was born held the position of president of the Eighteenth Ward Buchanan and Breckinridge Banner Club.  It was a heated Presidential campaign, with Duffy's pro-slavery candidates facing off against the anti-slavery Republicans Millard Fillmore and John C. Fremont.   Buchanan and Breckenridge won the White House.
In the meantime Bridget Duffy's problems with her servants continued.  The girl who helped with little Catherine was looking for a new job in September 1859, her ad stating, "A respectable young girl, 14 years of age, wishes a situation to mind children and make herself generally useful."
Felix Duffy died in the 19th Street house on February 25, 1861 at the age of 66.  As was customary, a wake was held in the parlor until his funeral there two days later.  It was followed by a high requiem mass at the Church of the Nativity on Second Avenue, most likely celebrated by one or both of his brothers, the Reverends John and Edward Duffy.
Bridget remained in the house until around 1867.  She sold it to Jehoiada J. Eagleton, president of the Eagleton Manufacturing Company, which manufactured "iron and steel wire, hoop skirts, chemicals, etc."  The large operation maintained three factories for the different products plus a warehouse on John Street.  Eagleton was also a partner in the importing firm of Angell, Eagleton & Co.
The Eagletons remained here until around 1871 when William B. Moore moved in.   Moore had fought in the Civil War, rising the the rank of colonel.   As the Duffys had done, Moore took in a boarder, Robert Kennedy, in 1872.  He earned his living as a clerk.
Kennedy most likely garnered extra spending money in 1873 when he gave his endorsement to a product.  The names of respected businessmen were actively sought for marketing purposes at the time.   On January 31, 1873 an advertisement in the New York Herald read, "One bottle Watts' Nervous Antidote cured me of severe Neuralgia and Rheumatism.  Strongly Recommend it.  Robert Kennedy, 338 East Nineteenth street."

William Moore died at the age of 69 on March 26, 1876.  His funeral was held in the house two days later.  The residence was then occupied for one year by Henry Bockman, who owned a saloon at 11 East 19th Street, and bartender Henry Webb, presumably his employee.
In 1878 the house became a respectable boarding house.  Living here that year were William Kentley, a printer; musician Frederick Letsch; and Cornelia Sliter, the widow of Watson Sliter.  They were joined the following year by another widow, Elizabeth Meyer, and her daughter, also named Elizabeth who took in sewing; and Eliza Shiel, widow of Michael Shiel.
The boarding house was owned and operated by Mrs. Lizzie Werner by 1887.  She specialized in housing pregnant women and assisting in the birth.  According to The Press, "A tin sign [that] hung from the the front balcony railing of this house proclaimed the name and calling of the midwife in English and German."
Lizzie Werner's "patients" were sometimes suspect.  In 1887 a man engaged a room for his wife during her last stages of pregnancy, but he never returned with her.  The following year, in May, the same man returned with a woman.  Lizzie told a reporter from The New York Times that he said "his name was Johnson; that he lived in Brooklyn, and that the woman was his wife."  The woman's frenzied behavior caused concern.  "Mrs. Werner said she did not like the looks of things and thought the proper place for her was Bellevue," said the article.  Lizzie took her to Bellevue where the 35-year-old was diagnosed as "demented."
In September 1889, Lizzie was the target of an investigative reporter doing an article on the black-market selling of babies.  "The first place visited was the modest three-story red-brick house of Mrs. Werner, 338 East Nineteenth street," said The Press.  "A slovenly-looking maid-of-all-work responded to the bell and ushered the reporter into a front parlor in course of a 'house-cleaning' upheaval."
The article described folding glass doors which divided the parlor from a sick room, or delivery room, beyond--what had no doubt been the Duffys' dining room in the 1850's.  The reporter described Lizzie Werner as "a sturdy-looking young German woman."  He asked her if it were possible to secure an infant and, according to his article, she responded:

You have come just in time.  I have a beautiful boy with black eyes, and perfectly strong and healthy.  It's a chance for you.  You can have complete surrender and feel just as sure of him as if he were your own.  When was he born?  Only yesterday.  The mother, poor thing, must part from him.  She is a pretty working girl, and poor, so she cannot take care of him.  The father?  Oh, I do not know anything about that.  I ask no questions.

Lizzie was especially careful about the next question--what was the cost.  She told him there was no cost, "only just enough to pay me for my time and trouble--say $15.  Be sure you understand that I do not sell babies.  I only get them as good homes as I can.  There is no other quiet way of providing for them."  The cost of Lizzie's trouble would equal about $430 today.
Although she assured that there was no need for "lawyers or documents," Lizzie did inside on a name "and a reference to some one who can say you are able to care for the child."   The reporter said he could talk it over with his wife, and perhaps come back.  While marketing in newborns was, of course, quite illegal, it can be argued that Lizzie was, in fact, providing a much needed service to indigent mothers.
The house continued as a more traditional rooming house after the turn of the century.   John Cooper, a bartender, lived here in 1903, and 14 years later, when American entered World War I, resident Theodore F. Hans entered the Army.  He was wounded in battle in 1919. 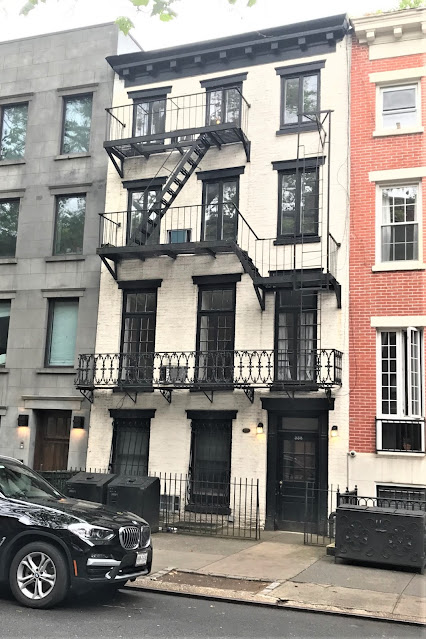 It was not until 1960 that the venerable house was officially converted to apartments.  The renovations resulted in a duplex on the first and second floors, with two apartments per floor above.  The duplex was divided into two apartments in 1973.   The red brick and brownstone trim have been painted, the windows replaced, and an iron fire escape tacked to the façade (which, thankfully, did not affect the striking balcony).  Nevertheless, the overall appearance of the Duffy house is intact.
photographs by the author
no permission to reuse the content of this blog has been granted to LaptrinhX.com
Posted by Tom Miller at 1:14 AM