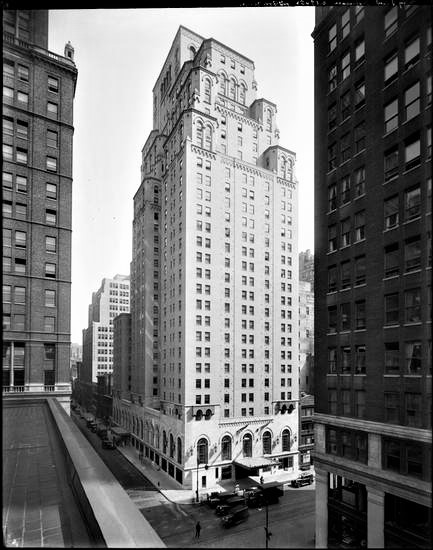 The hotel had just opened when this photograph was taken.  photo by Irving Underhill from the collection of the Museum of the City of New York
On April 16, 1928 The New York Times reported that Harris, Forbes & Co. and R. W. Halsey & Co. were offering $5 million in bonds as the initial financing to erect a hotel at Seventh Avenue and West 31st Street.  The article noted, "The entire cost of building the hotel is estimated at more than $9,300,000."  The massive price tag would top $140 million today.
The venture was a brave one.  While thousands of passengers arrived in New York City every day across the street at Pennsylvania Station, the massive Hotel Pennsylvania had operated a block to the north since 1919--the largest in the world at the time.  Like it, the proposed Hotel Governor Clinton would have an underground passage to the train station.
The architectural firm of Murgatroyd & Ogden was awarded the commission to design the 31-story structure.  George B. Post & Sons was brought in as "consultants."  Their striking design was a romantic melding of Romanesque and Northern Italianate styles.  Construction took "a year and a day," according to The New York Times.  Shops lined the ground floor, directly below high arched windows flanked by large bronze lanterns.  At the third floor corners, charming Juliette balconies clung to the facade.  Inside were 1,200 rooms, "all with baths."
Each room was also outfitted with a "servidor," a full-length cabinet with a door on the inside of the room and one on the corridor side.  Staff could pick up clothing for pressing, or shoes for shining, for instance, and return them without bothering the guests. 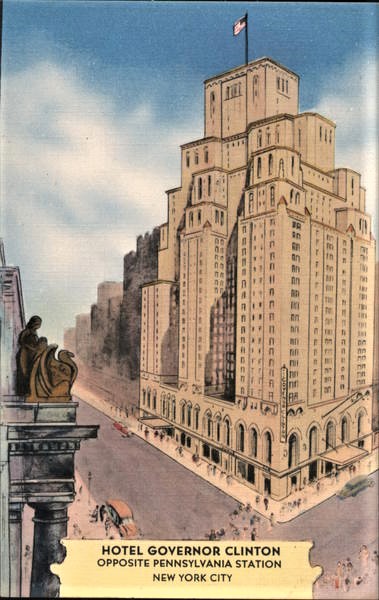 The hotel was named for George Clinton, the first Governor of New York State and Vice President of the United States under Presidents Thomas Jefferson and James Madison.  It was designed, according to an announcement, to accommodate "the traveling public and the mercantile centre of which it is a part."   The hotel opened on August 19, 1929.  The New York Times reported that from the 20th to 30th floors, some suites opened onto "private balconies equipped with awnings and piazza furniture."
The two-story main lobby was outfitted with French limestone pilasters, "supporting a gold and colored decorative paneled plaster ceiling, these panels being recalled in the terrazzo floor," said by The Architectural Forum in February 1930.  On the ground floor were the Grill Room with a dance floor, and a coffee shop. 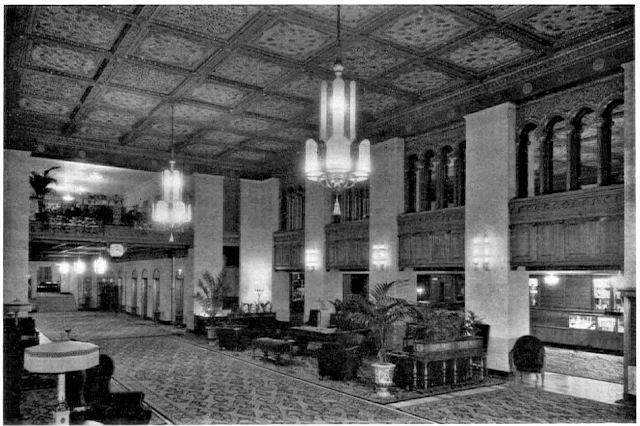 The Art Deco chandeliers strayed from the otherwise Italian motif of the lobby.  The Architectural Forum, February 1930
The magazine said the second floor Governor's Room was "executed in the early Colonial style," with two-tone gray walls, curtains of "wine color," and three crystal chandeliers.  Also on the this level was the Florentine dining room, with its vaulted ceiling. 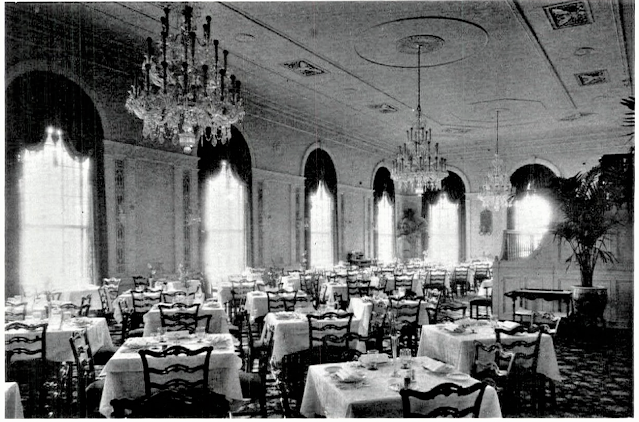 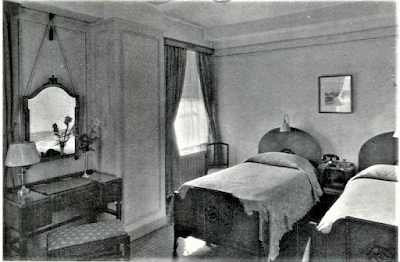 A "typical bedroom."  The Architectural Forum, February 1930.
Somewhat surprisingly, on August 20, 1929, the day after its opening, the owners of the Governor Clinton announced, "Additional land has been purchased and plans for an 800-room addition, with frontage to Thirtieth Street, is to be erected shortly."  The plans by Murgatroyd & Ogden had been filed five months earlier.  In March 1929 the owners said the extension "will conform in height and architectural design to the thirty-one-story structure now being completed."

photo by Samuel H. Gottscho, The Architectural Forum, February 1930
The Governor Clinton could not vie with the Hotel Pennsylvania's large ballroom and big bands.  The Governor's Room was a favorite, however, for banquets and other events.  In February 1930, for instance, 150 delegates from 39 national Jewish organizations held a conference here that resulted in resolutions denouncing the religious persecution of Jews in Soviet Russia. 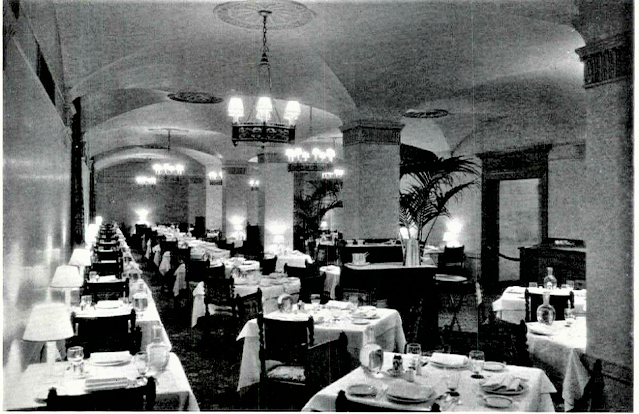 The Florentine Dining Room on the second floor.  The Architectural Forum, February 1930.
In 1944 United Seamen's Service held "the best picture in the new photo contest" here.  The photographs had to be of "the American merchant marine or related subject taken in this country," said The New York Times.  And in May that year the Men's League in Aid of Crippled Children, Inc. held its contest of students "who have shown the greatest ability to overcome physical handicaps."  The winners were awarded $100 scholarships. 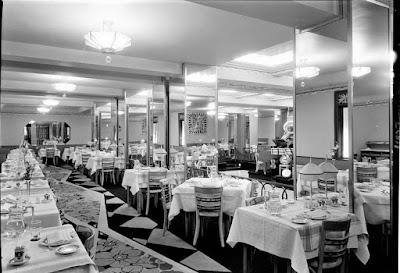 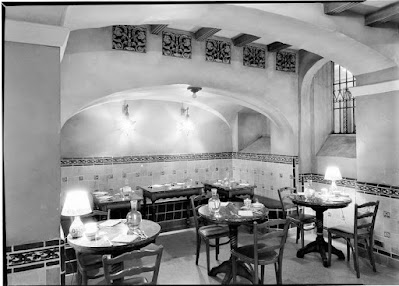 The Grill Room (above) and a corner of the Coffee Shop.  The Architectural Forum, February 1930.
In the years before a convention center would host such events, in March 1954 the American Toy Fair was held here, with more than 1,400 displays.  The hotel was the scene of the Pug Dog Club of America Pug Show in February 1961.
Later that year the hotel would play a part in a highly unusual suicide.  Morris Weingarten, who lived in Miami Beach, checked into the Governor Clinton in September.  Soon afterward he went to the Riverside Memorial Chapel on Amsterdam Avenue, and made funeral arrangements for himself and paid for a cemetery plot.  Then, about a month later on October 23, he sent a note to a friend in the Bronx, Arthur Gleberman, telling him "to take care of his personal effects."  Alarmed, Gleberman rushed to the hotel where he and an employee forced open the door to Weingarten's room.  The 67-year-old was found dead in the bathtub.
Early in 1964 a group calling itself Young Citizens for Johnson was formed, with headquarters in the hotel.  On February 5 chairman Victor L. Anfuso, Jr. described the group to The New York Times as a "grassroots movement formed in the belief that President Johnson, like his predecessor, the late President Kennedy, symbolizes the spirit of youth." 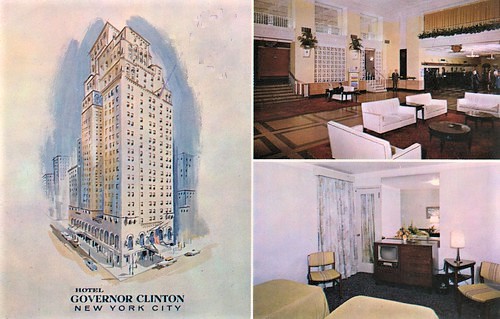 A postcard depicted the updated 1960's interiors.
The group received a happy surprise visit four months later.  President Lyndon B. Johnson was in town on June 6.  The New York Times reported, "on his way from the West 30th Street heliport...his motorcade made an unscheduled stop at the Governor Clinton Hotel, where he greeted a shouting crowd of admirers.  About 200 members of Young Citizens for Johnson were among several thousand persons jammed behind police barricades."  The article noted, "Although the President stopped for only a few minutes, he managed to shake the hands of hundreds on both sides of Seventh Avenue before he went on to the dedication ceremony." 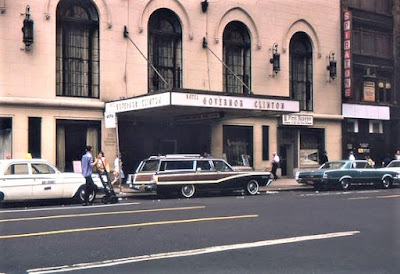 The shops and marquee had been modernized in 1966.  photo by Thomas Davis.
A month prior to that incident, the hotel had had less flattering publicity.  The Liverpool Red Devils soccer team was staying at the Governor Clinton Hotel during a 10-game tour of the Untied States and Canada.  When captain Ronnie Yeats and his roommate, Ian St. John, returned to their room on May 9, they found it had been broken into and their cameras and other items were stolen.
Later that year the Governor Clinton Hotel was converted to a residential hotel, the Penn Garden.  An advertisement in the Barnard Bulletin in October 1970 touted "Student Housing from $90 per month," and urged, "Join the College Crowd."  The ad said, "We match guys and guys, gals and gals, in spacious One and Two Room Air-conditioned accommodations, each with private bath and TV."  The rent included weekly maid service, student discounts on dining and nearby shops, and "quiet study rooms."
In 1974 the building was renamed the Southgate Towers.  And in 2004 it was returned to a transient hotel, the Affinia Dumont.  Among the updated amenities, at least in one suite, was a private gym.  On October 26, 2004, The New York Times said that the suite's adjoining space was "fully equipped with several Life Fitness machines, free weights, medicine balls, stretch mats and bands, and a sauna and bathroom...The suite, including the private gym, goes for $499 a night."  It was perfect for former New York Yankees pitcher Richard "Goose" Gossage who stayed in the suite that year.
In 2005 The New York Times called the Affinia Dumont "one of the city's best-kept hotel secrets."  Saying it was "designed for jock-minded business travelers," journalist Denny Lee noted, "But cost-conscious tourists will find that it suits their needs as well." 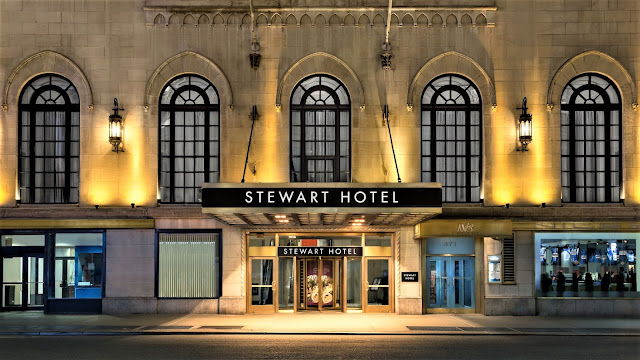 photo via stewarthotel.com
Another incarnation came in 2016 when the Affinia Dumont became the Stewart Hotel.  The updated rooms appeal to the modern traveler, while the vintage spaces like the Governor's Room have been little altered.
LaptrinhX.com has no authorization to reuse the content of this blog
many thanks to reader Andrew Cronson for prompting this post.
Posted by Tom Miller at 1:26 AM