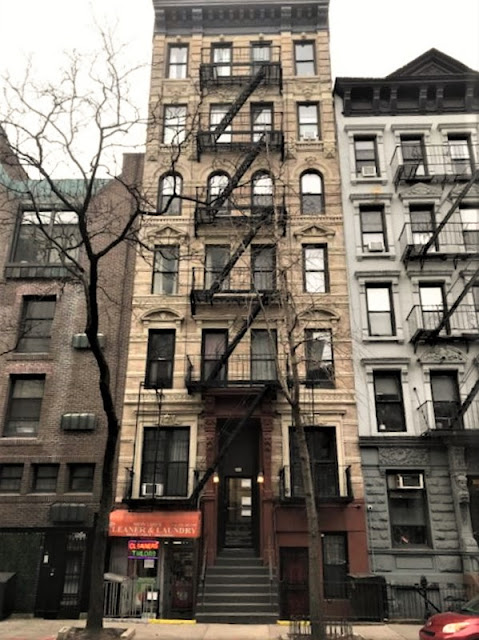 In 1848 W. Wright purchased the empty lot at 262 West 22nd Street for $1,500 (about $50,000 in today's money) and erected a three-story house for his family.  In the rear yard was a smaller structure which William Wright used for his building business at the end of the century.

When developers Joseph L. Buttenweiser and Osias Kanner purchased the property in July 1900 the Real Estate Record & Guide noted "it has been used by the [Wright] family since that time."

Architect George F. Pelham was commissioned to design a six-story "store and flats" to replace the old buildings.  The total outlay of the project, including the property and the construction costs, would equal about $1.42 million in today's dollars.

An especially high basement level would accommodate the two store spaces below the sidewalk level.  The upper floors were faced in beige brick and lavishly trimmed in terra cotta.  Pelham's Renaissance Revival design fell just short of the over-the-top decoration the marked so many of the flat buildings of the period.  It included dignified Renaissance-inspired elements like classical pediments and Corinthian piers; yet had no shortage of showy adornments like portrait keystones, grimacing grotesques and snarling lions' heads.

In an interesting game of real estate hot potato, Kanner sold his interest in the project to Buttenweiser in 1900; and then on June 14, 1901 Buttenweiser sold the completed building to Theresa Sandberg.  In 1904 she transferred title to Louis Sandberg, presumably her husband or son, who in turn transferred the property back to Joseph L. Buttenweiser.

The building filled with respectable working class tenants.  One family, however, seems to have been unable to pay the rent and skipped out, leaving their furnishings behind.  An advertisement in The Evening Telegram on August 29, 1905 offered "For sale--Contents five room flat cheap."  Prospective buyers were directed to see the janitor.

The advertisements of tenants seeking work sheds light on the their various professions.  A rather oblique ad in June 1906 read simply: "Young Man, 21; first class penman.  B. Strauss, 262 West 22d st."  J. Rogers was clearer in her advertisement on September 18, 1908.  "Neat, reliable girl permanently as first class chambermaid; would assist in pantry."

A tenant named Peterson, a professional musician, was also looking for a job later that year.  His succinct ad read "Violinist and viola player wishes engagement; will travel."

Arthur Mooney and his family lived in the building at the time.  The 18-year-old played amateur sleuth in May 1907 after reports that Gertrude Mooney (no relation to Arthur) who lived nearby at 41 West 24th Street, had gone missing.  Arthur made careful note of the girl's description and set out to find her.

On May 28 he found her walking along 14th Street.  Every detail of the girl matched the description he had carefully read.  The Brooklyn Standard Union reported "He called to a passing policeman and had the girl arrested.  She protested, but Mooney displayed so much persistency that she was locked up at the Tenderloin station."

At the station house the 16-year-old girl insisted her name was Eleanor Lefevre, but she "begged the officers not to notify her parents in Brooklyn, as she had told them she was going to a dance instead of Manhattan."  Indeed, Mooney, described by the newspaper as "the enthusiastic amateur detective," had made a mistake.

Things did not end so well for Eleanor, either.  Despite her pleas, "a message was sent and her father arrived and in no gentle frame of mind [he] hurried the girl to her home."

Like the Mooney family, the Patrick Nolan family had originally come from Ireland.  He was a member of The Friends of Irish Freedom, an organization founded to assist in any movement to help obtain Irish freedom from England.

In January 1917 the Luna Theatre screened the Vitagraph film Whom the Gods Destroy.  It had been decried by The Friends of Irish Freedom as being anti-Irish and so Nolan and another member, Edward Moore, set out to disrupt the screening.  They were arrested and charged with "interrupting" the show.

The incident prompted Vitagraph's general manager to sent a letter to the officers of The Friends of Irish Freedom "asking them not to condemn a picture which they have not seen" and offering a private showing.  On the other hand, he firmly told reporters that the company "will spare no effort to protect to the fullest extent of the law, any exhibitors who are annoyed or threatened for showing 'Whom the Gods Destroy.'"

Patrick Nolan exemplified the tenants whose working class status often prompted them to activism.  Differences between labor and management--often regarding brutal work conditions, long hours and low pay--sometimes erupted into violence.  Garment workers rioted in the Garment District the first week of January 1927; and again two weeks later, on the 24th.  The New York Evening Post entitled an article "Police Clubs Rout Garment Rioters / Warring Union Factions Battle With Gaspipes and Pool Cues on 8th Avenue" the following day.  Among those arrested in the melee was Nicholas Perdick, who lived at 262 West 22nd Street.

At the time, the labor unions were often backed by Communist and Socialist groups.  The Government kept close tabs on members, publishing names of Communist Party members, like Stanley Bray, living at 262 West 22nd Street in 1936, and William P. Mikacles in 1940.

One of the stores at mid-century was home to Joseph Robin's frame shop.  His advertisement in Popular Photography magazine in 1947 touted "Photo mounts.  Variety folder and easel types. All sizes.  Beautiful wedding and baby albums.  Salon mats.  Wood and metal frames."

By 1953 artist James Russell Goetz rented an apartment in the building.  His broad talents earned him listings as an illustrator, etcher, engraver and fine art painter.  By now he had been exhibited in the National Academy of Design, the Seattle Art Museum, the Pennsylvania Academy of Fine Arts, and other respected institutions.

Changing times were reflected in the arrival of the shop of Sound Probe, Inc. around 1972.  Self-described as "stereo surgeons," its advertisement in New York Magazine that year read "Graduate engineers heal ailing components."

In 1986 the building was renovated, resulting in four apartments per floor.  But it was Michael Brown's court case against the landlord that year that drew attention to the address.  New York City's gay population was undergoing siege from the AIDS epidemic and men who lost their life partners to the scourge often faced discrimination from families and landlords.

In 1976 Brown had moved into Robert Hayes's one bedroom apartment here.  The men paid $161 per month on their rent-stabilized apartment.  Eight years later, in February 1985, Hayes died of AIDS.  Because Brown was not a family member and his name did not appear on the lease, the landlord, Bruce Kafenbaum, issued an eviction notice.

But Brown fought in court and on April 21, 1986 Justice Helen E. Freeman of the State Supreme Court ruled that "a gay life partner has the same right as a family member to a vacancy lease under the rent stabilization law."  It was a significant win for the gay rights movement. 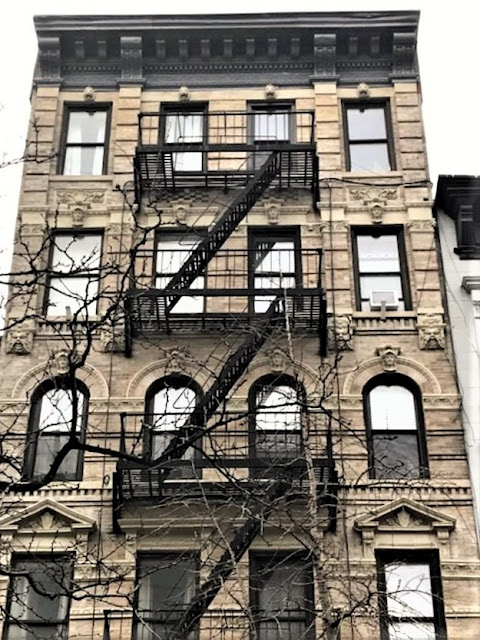 George F. Pelham is best remembered today for his 1920's romantic neo-Tudor apartment buildings and residences.  But his somewhat quirky flat house on West 22nd Street is worth a pause to appreciate the host of faces staring back.

photographs by the author
LaptrinhX.com has no authorization to reuse the content of this blog
Posted by Tom Miller at 1:48 AM