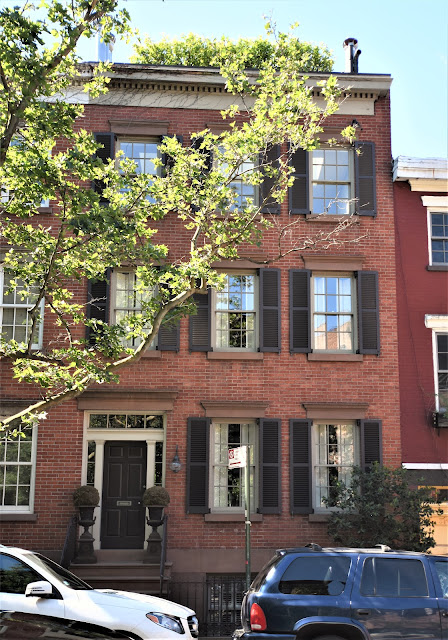 In 1842 Nicholas Brinckerhoff purchased building plots on West 11th Street, between Hudson and Greenwich Streets, and began construction on three brick-faced homes--the middle one for himself.  The Greek Revival style houses rose three stories above brownstone-clad English basements.  Like the Brinckerhoff house next door, 312 West 11th Street had a handsome entrance with narrow sidelights and a four-paned transom.  A wooden cornice with delicate dentils completed the design.
The house was home to William Shuart, a tax collector, and his family until 1848.  It was then purchased by Rev. Robert Travis.  He and his wife, the former Sarah Forbes, had married on June 14, 1825 in Massachusetts.  The couple had two sons, Edward F. and Robert, Jr., both of whom were attending Columbia College when they moved in--Edward was a senior and Robert a sophomore.
Both sons entered religious life.  Robert, Jr. was ordained around 1850 and became assistant to Rev. David Moore at The Church of the Ascension on Staten Island.  He was in charge of the chapel of the main church.   By 1858 he was appointed rector of Trinity Church in Jersey City, New Jersey.  His brother served as a lay deputy in that church.
Despite the considerable commute, Robert, Jr. lived with his parents at least through 1860.  The family took in one boarder at a time, at least two of them rather surprising within a minister's household.
In 1855 and '56 Hill Bassford, who operated a baths, lived with the family.  More expected was their next boarder, Elizabeth Borbridge, who was a dressmaker.  But in 1860 they took in Patrick Anderson, who ran a saloon nearby in the section of West 11th Street that was still called Hammond Street at the time.
Rev. Robert Travis, Sr. died in 1866.  Robert Jr. and his mother remained in the West 11th Street house until her death on New Year's Eve, 1868 at the age of 70.
James N. Quackenbush and his family moved into the house in the early 1870's.  The operator of a "planing," or carpentry, firm, he also sat on the Board of Managers of the New York Bible Society.
By 1876 312 West 11th Street was owned by Elisha Bloomer and was being operated as a boarding house.  The wide variety of residents that year were real estate agent Theodore Fenwick; William H. Reilley, a binder; George Topf, who ran a beer saloon; and George Waterman, who was in the ice business.
Bloomer owned a dizzying number of rental properties in Greenwich Village, including the former Brickerhoff house next door and at least a dozen other houses in the neighborhood.  In November 1888, following his death they were sold at auction.
The new owner continued to operate 312 West 11th Street as a boarding house, however the names of the new tenants appeared in newsprint for unwanted reasons.
On November 20, 1895 a 28-year-old boarder, Carrie Lewis, committed suicide in her rooms.  The Poughkeepsie, New York newspaper The Evening Enterprise, reported that she "died from the effects of rat poison, which she had swallowed with suicidal intent."
A year later, on November 22, 1896, Henry Barbour was arrested as he walked out of a pawn shop on Hudson Street.  Edward Cobb ran a dancing academy on Bleecker Street.  Among the costumes kept there were men's dress suits.  The previous afternoon Cobb was heading up the stairs to open the academy and passed Henry Barbour, who was carrying a bundle, coming down.
It was not until about a half hour later that Cobb realized someone had broken into the school and that two of the men's suits were missing.  When caught, Barbour resolutely professed his innocence.
"I came by the coats honestly," he insisted.  "I got them from a man named Mike Corcoran, who used to work at the academy, who gave them to me as security for a loan."
Barbour's story fell apart when Edward Cobb said he had never heard of the man.
In 1902, according to The Jersey City News, "Quite a lot of smuggling has been done in tobacco from the Dutch steamers and the customs authorities are very anxious to break it up."  Before the ships docked, smugglers rowed out in the darkness to offload the valuable cargo.
At 8:00 on the morning of December 1 that year John Degnan, who lived at 312 West 11th Street, and a cohort, Joseph Van Damme, were driving a tarp-covered wagon when they were stopped by Patrolman Entwistle near the entrance of the ferry house on Exchange Place.  Asked what they had in the wagon, they said they were carrying vegetables.  Suspicious, Entwistle pulled back the tarp where he found ten bags of tobacco.
The Jersey City News wrote, "The men could not give a satisfactory account of where they had obtained the goods and were arrested."  When they appeared before Judge Hoos, they "refused to tell where they had got the tobacco or by whom they were employed."  Their stiff bail was more than $9,000 in today's money.
James Dolan received more honorable press coverage in 1918.  The young corporal was fighting in France when, on September 26 his regiment became part of the Meuse-Argonne offensive.  The 47-day battle resulted in more then 350,000 deaths, including 26,277 Americans.  His name was listed in the New-York Tribune on December 18 as one of the "New York men who took part in desperate fighting."  The following year, on August 21, he was awarded the Distinguished Service Cross.
Despite being operated as a boarding or rooming house throughout most of the 20th century, 312 West 11th Street was never divided into apartments.
It was purchased by Charlie and Robin Whitehouse in 1995.  They used the basement level as the office for their travel agency until 1999.  In 2002 they spent $160,000 to renovate the space to the Ground Floor Theater.  On October 20, 2002 Trish Hall, writing in The New York Times, explained:

Robin Whitehouse may be sorry she said it, because it's not a sentiment many New York theater producers often express, but she really likes to give new comers a chance.  That's why she named her nonprofit stage company FatChance Productions, and that's why she has transformed the bottom floor of her house into a theater. 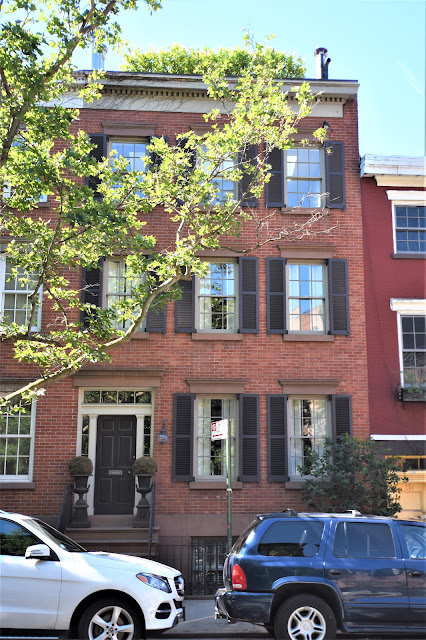 Robin and her business partner, Ben Hodges, staged FatChance Productions projects in the theater, and also rented it to production companies without their own space.  Hall described it as "intimate and flexible, with black walls and ceilings and very little else that is fixed."  The Ground Floor Theater could accommodate an audience of up to 60.  It is now called the Next Stage Theater.
photographs by the author
LaptrinhX.com has no authorization to reuse the content of this blog
Posted by Tom Miller at 1:29 AM