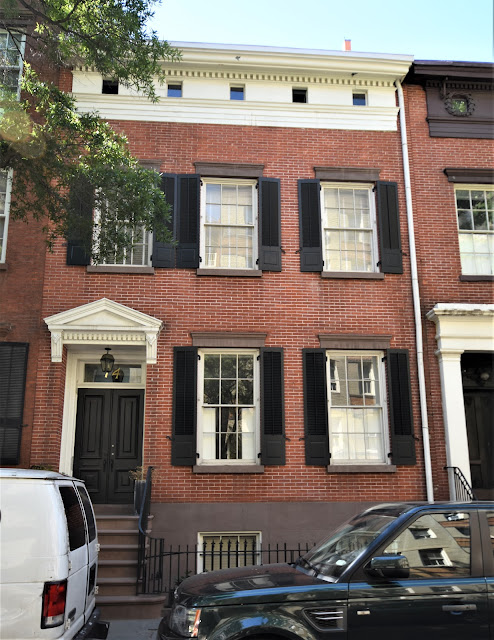 Early in their careers, carpenters Gabriel M. Baldwin and John Mills partnered to form Baldwin & Mills.  In 1839 they teamed with Alexander Lockwood, who had purchased land on Bank Street in 1835, and mason Amos Woodruff, to erect four houses.  Interestingly, the similar homes were not built simultaneously as a single project, but one-by-one.
The last to be built was 64 Bank Street (renumbered 74 Bank in 1867), completed in 1842.  Two-and-a-half stories tall above a stone basement, its understated Greek Revival design forewent the heavy stone entrance enframement of its neighbors.  The attic windows that peeked through the cornice fascia may have once been encircled by carved wreaths, as seen next door at 76.
Upon completion, the 25.5-foot wide house house was taxed to Baldwin & Mills.  It became home to John Mills and his family.  The year the house was completed he and his wife Jane added to the family with the birth of a daughter, Josephine, who was called Josie.
John Mills happened upon a fire on Canal Street on the night of April 8, 1864 and, with the growing crowd, stopped to watch.  As everyone's attention was focused on the blaze, a man brushed against Mills, slipping his hand into his vest pocket and taking his gold watch.  James Brennan's would-be victim was street-wise and immediately recognized what was going on.  The New York Times reported, that Mills "seized him by the collar, and accused him of the theft."
While Mills had the thief in his grasp, an onlooker, Albert M. White, saw Brennan drop the watch to the ground.  He picked it up and returned it to Mills.  Brennan had chosen the wrong man to pick-pocket and Mills had him arrested and charged with theft.  The $100 watch he nearly lost reflected Mills's comfortable finances.  Its value would be closer to $1,700 today.
The Bank Street house was the scene of Josie's marriage to James Galway on February 25, 1869.  Following their wedding trip, the newlyweds moved into 74 Bank Street.  The parlor would be the scene of a much more somber ceremony ten months later.  Josie died at the age of 27 on December 2.  Her funeral was held three days later in the same room where she had been married.
James Galway stayed on with his in-laws.  He listed his profession as "commissioner," and was highly involved in Goshen Park, a trotting race trace in Goshen, New York.  He was one of the judges there, and bought and sold thoroughbreds, as well.  In 1873, for instance, he paid $1,000 ($22,300 today) for Young Highland Maid; and in the spring of 1875 bought the "famous gelding" Saint Julien, as described by the Breeders' Trotting Stud Book, and then sold him the following winter.
While Galway had the money to spend on horses, the Financial Panic of 1873 had left many New Yorkers in desperate circumstances.  On March 13, 1874 the New York Herald reported, "The continued cold weather has had its influence on the hungry and destitute population of the city.  The Delmonico [soup] kitchens are now crowded every day, and the raw and piercing winds of the early March days are driving hundreds of the poor to seek assistance at these places where good hot soup can be obtained without money."
In addition to food, the poor also needed coal and clothing.  Drop-off headquarters were established throughout the city where citizens could donate garments.  Lending his assistance to the drive was James Galway, who served on the District Visiting Committee of the 9th Ward.  Donors who found the Charles Street police station inconvenient could bring items to 74 Bank Street.
In March 1882 Jane Mills sold the house to Robert Lindsay for $9,565--around a quarter of a million in today's dollars.  Born on November 5, 1832, Lindsay had been an officer in the Court of General Sessions since 1862.  It was most likely Lindsay who added the cast metal, neo-Grec hood over the entrance.
On Saturday morning, February 6, 1892 Lindsay's wife, Elizabeth, went into his room at around 10:00.  She was unable to wake him and his breathing was labored.  She called in Drs. Robert W. Buchanan and Carlos P. Tucker, who diagnosed a stroke.  Robert Lindsay never regained consciousness and died at the age of 60 around 1:30 that afternoon.
Following Lindsay's death, Elizabeth took in a boarder, Anthony Swindelman.  That summer the city suffered a broiling heat wave, and on July 30 The Press reported, "Since Sunday last more than 200 employe[e]s of the refineries have been prostrated, many of them dropping in their tracks unconscious...Hundreds of men, it is said, have been driven to the verge of insanity by the awful heat and foul air."
Each day the newspapers listed the dead and the "prostrations" of the day before.  On "The Death List" of The Press was "Anthony Swindelman, 60, of No. 74 Bank street, [died] at No. 51 Christopher street; dead when found."
Elizabeth Lindsay remained in 74 Bank Street until April 1915 when she sold it to Jacinto Costa.  In reporting on the sale The New York Press commented, "The buyer will probably build an apartment house."  Instead, however, Costa leased it to John J. Ryan and it continued as a private dwelling.
In 1920 Flora H. Haggard purchased 74 Bank Street from Costa  and on October 9, 1920 the New York Herald reported that the 74 Bank Street Corporation had been formed "for the purpose of taking over the three story house."  Flora Haggard and her partners renovated it into studio apartments "at an expense of $15,000," according to the New York Herald in August 1921.
Among its in 1923 was the self-appointed film critic Everett Douglas.  He was unimpressed with the silent film Salome that year, starring and produced by Alla Nazimova, and was annoyed at its glowing reviews.  He wrote to The Morning Telegraph saying in part:

Most of the boobs who are employed to criticize the pictures were so befuddled by the airy peculiarities of this film that they were afraid to brand it as silly, dull, and not even exotic.  Madame Nazimova, the film's prime maker of faces, might have been expected to at least make a feature possessing this last qualification, but between the grimacing, posturing, tawdry 'Beardsley' effects, and Wildian affectations, this was not a spectacle, not a surprise, not a masterpiece, and not even a monstrosity.  It was just another one of those genuflections of the complacent Madame at her own alter.

Despite Douglas's opinion, Alla Nazimova's Salome is today considered a cultural masterpiece.
Flora Haggard spent her summers in Connecticut and used one of the apartments in 74 Bank Street as her town home.  On January 16, 1932 she entitled an advertisement in The Sun, "Flora Haggard of Newtown, Conn. has come to New York to spend the winter" and announced, "She has brought with her a collection of primitives, pine furniture, and some Windsor chairs, which are for sale." 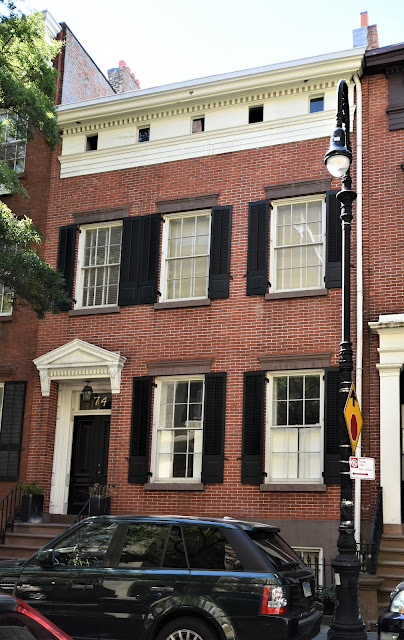 The house was converted to a total of six apartments in 1936, with a dentist office on the ground floor.  And then, in 2010 it was returned to a single family house.
photograph by the author
LaptrinhX.com has no authorization to reuse the content of this blog
Posted by Tom Miller at 1:34 AM