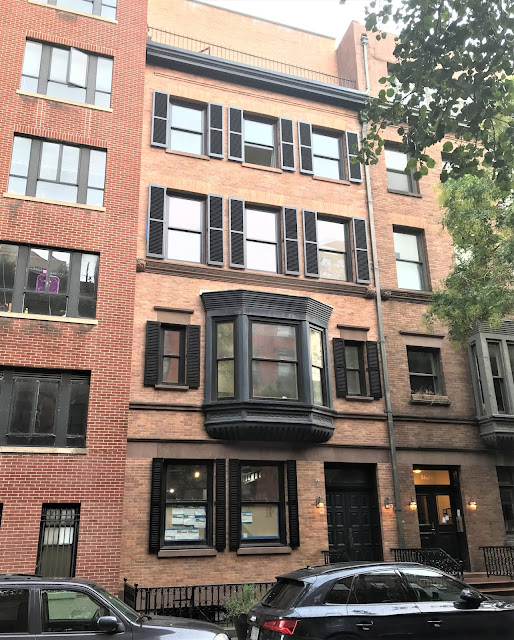 Eva Johnston Coe had grown up in the Washington Square neighborhood.  Her father, John Taylor Johnston, had erected a marble mansion at 8 Fifth Avenue at 8th Street in 1855.  Her sister, Frances, married Robert W. De Forest in 1872.
The extended De Forest family owned several abutting plots on East 10th Street, between Fifth Avenue and University Place.  In 1887 landscape artist and interior decorator Lockwood De Forest erected his exotic house at 7 East 10th Street and the following year he sold the plot at 9 East 10th Street to William Hamilton Russell, who construction on the Ava apartment building.
In 1890 Martha Rosalind Coe Townsend and Eva Johnston Coe began work on 24-foot-wide houses at 3 and 5 West 10th Street.  Designed by George E. Harney, the harmonious four-story homes are described by one architectural historian as "in the Romanesque tradition," although they display none of the expected traits of that style--arched openings or undressed stone, for instance.  A single nod to the style appears in the carved bosses on either end of the second floor cornices.
Eva and her husband, Henry E. Coe, moved into 5 East 10th Street.  If Martha and her husband, James Rodman Townsend, ever lived in 3 East 10th Street, is was only briefly.  In 1892 Martha leased the house to newlyweds Clarence Winthrop Bowen and his bride, the former Roxana Atwater Wentworth.  (The wealth of the families was evidenced in Roxana's wedding veil being exhibited the following year at Chicago's 1893  World's Columbia Exposition.)
Bowen had graduated from Yale University in 1873 and went into journalism with the New York Herald Tribune.  The position was short-lived because upon the death of his father, Henry Chandler Bowen, the following year he inherited The Independent newspaper. 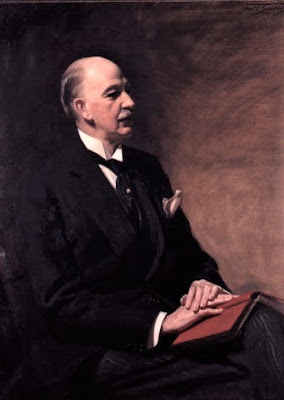 Clarence Winthrop Bowen from the collection of the American Antiquarian Society 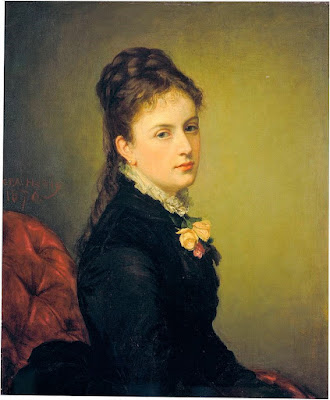 Roxana Wentworth Bowen, from the collection of the National Gallery of Art.
The Bowens summered at the estate he inherited from his father.  The charming Gothic Revival style Roseland Cottage, in Woodstock Connecticut, was erected in 1846. 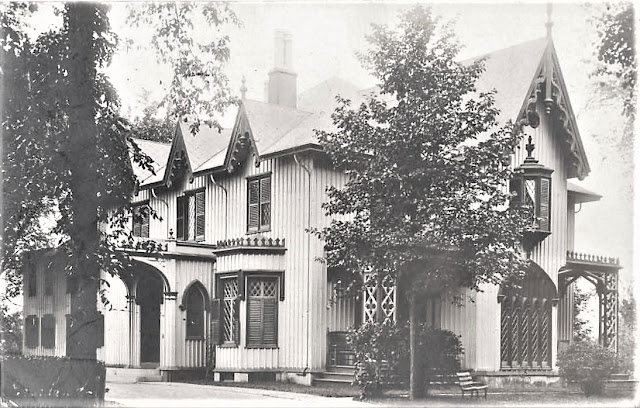 A period postcard depicted the fairy tale-ready Roseland Cottage.
In 1895 the couple's only child, Roxana Wentworth Bowen, was born.  Nursemaids made it possible for socialites to quickly bounce back into their social swirl and Roxana was no exception.  On December 28, 1896, for instance, The New York Press announced, "Mrs. Clarence W. Bowen will receive at her house, No. 3 East Tenth street, on Thursday afternoon, from 4 to 6 o'clock."
On January 8, 1901 the New-York Tribune reported, "Mrs. Clarence Winthrop Bowen, No. 3 East Tenth-st., will receive Fridays."  It would be Roxana's last winter season in the house.  At some point, Martha Townsend had transferred title to Emily Johnston Coe's sister, Frances Johnston, who had married Pierre Mali in 1892.  (The Malis were still living in the  old Johnston mansion on Fifth Avenue at the time.)  On July 17, 1901 The Evening Post reported that Frances had leased the house to Roswell Skeel "for five years."
Born in 1866, Roswell B. Skeel, Jr. had married Emily Ellsworth Ford in 1891.  Emily was a direct descendant of William Bradford, governor of Plymouth Colony, and the great-granddaughter of Noah Webster.  Her father was railroad and steel magnate Gordon Lester Ford.  The Skeels' country home was Seven Gates Farm in Vineyard Haven, Massachusetts.
Skeel was what was known as a "gentleman," meaning he had no profession (nor needed one).  Both he and Emily devoted their time to philanthropy.  Rosell was especially involved in the Prison Association of New York.  Taking no salary, he served as the head its Relief Bureau, which assisted the families of prisoners.  Emily was involved with several organizations that addressed social reform, environmental conservation, and educational.
In May 1918 Frances Mali leased the house to Magistrate Joseph Edward Corrigan and his wife, the former Margaret Faith Robinson Haggin.   The couple had married the previous year, following Margaret's divorce from millionaire artist Ben Ali Haggin III.  Corrigan's uncle was the late Archbishop Michael Corrigan.  The Corrigan country house was in Wakefield, Rhode Island.
In the spring of 1923 Joseph Corrigan charged Police Commissioner Richard Enright and other high city officials with running a bootleg operation.  Enright told reporters on April 23 that the District Attorney and Corrigan had a "tendency not only of injuring me, but of impairing the efficiency of the entire police force."
Corrigan remained undeterred.  And when he and Margaret returned from Wakefield on the night of July 4, 1923, they found the house ransacked.  The burglars had not been interested in valuables, but in documents.  But they left empty-handed.
The Sun and The Globe reported, "It is understood that papers relating to the magistrate's charges against the police commissioner and to the alleged connection of bootlegging with high police officials were concealed in a part of the house which the burglars apparently did not visit."  The article noted, "They will be removed by the magistrate himself to-day."
Additionally, more than once Corrigan told reporters "that the telephone wire leading into his residence, 3 East Tenth street, had been tapped," according to The Evening Telegraph.
Newspapers and the Citizens Union demanded that Richard Enright resign.  A grand jury was unable to come convict him and in 1924 he sued Joseph Corrigan for libel.  He lost the case.
On April 27, 1925, 45-year-old Frank Ferris appeared before Corrigan on a charge of intoxication.  The two men lived on the same East 10th Street block.  The Sun reported, "Ferris asked the Magistrate to be kind to him, inasmuch as they lived so closely to one another.  But Magistrate Corrigan, despite their residential proximity, refused to melt, and was all for punishing Mr. Ferris for imbibing too freely."
Ferris then took another tact.  "He promised to take the pledge for a year if Magistrate Corrigan would but be easy on him."  Corrigan gave him an hour to return to court with proof of his pledge to abstain from alcohol for a year.  Ferris was back in time, having gone to Father Cashin of St. Andrew's Church, bringing the signed pledge as proof.  "Then Magistrate Corrigan showed his neighborliness by giving Ferris a suspended sentence," said the article.
Joseph E. Corrigan died on January 9, 1935.  Margaret moved to a Fifth Avenue apartment and 3 East 10th Street became home to F. Shelton Farr and his wife, the former Louise Arnold Jackson.  Farr was the senior partner of the commodity and stock brokerage firm of Farr & Co., which he founded in 1920.  The couple's country home was in Lawrence, Long Island.
Only three years later, on June 11, 1938, The New York Sun reported, "Douglas Gibbons & Co., Inc., have leased 3 East Tenth street, the former home of F. Shelton Farr...for a term of twenty-one years to Park Madison Realty Corporation...The lessee plans to convert the property into ten two-rooms suites." 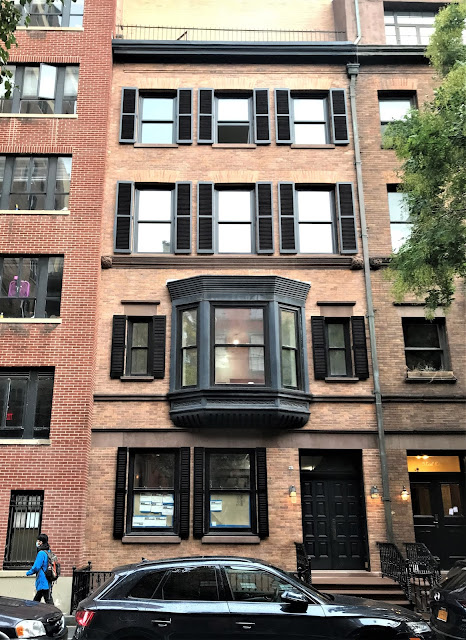 The renovation, completed in 1940, resulted in two apartments per floor.   In 1954 a bland and windowless fifth floor, also containing two apartments, was added.  Otherwise, the exterior is remarkably unchanged.
photographs by the author
LaptrinhX.com has no authorization to reuse the content of this blog
Posted by Tom Miller at 1:12 AM