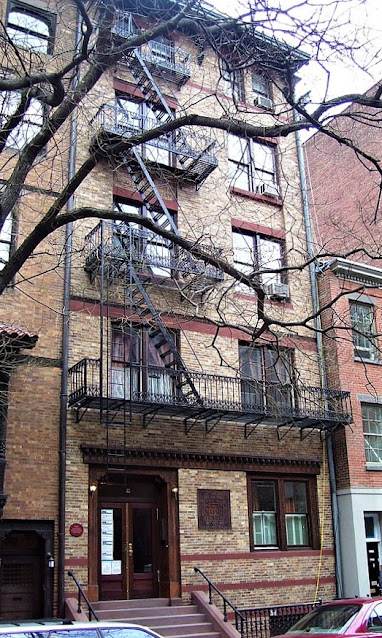 photo by Beyond My Ken
In 1879 Lockwood De Forest established the interior decorating firm of Associated Artists with Louis Comfort Tiffany.  De Forest was intensely interested in the furniture, architecture and decorations of the East.  When he began construction of his home at 7 East 10th Street in 1887, he worked closely with architect Van Campen Taylor to lavish the exterior with lush Indian teakwood carving.
The following year De Forest sold the lot next door at 9 East 10th Street to William Hamilton Russell, a partner in the architectural firm of Renwick, Aspinwall & Russell.   Construction of a five-story apartment building on the site began that year.
There may have been a deal in the sale negotiation that required Russell to use carved elements from De Forest's factory in India which manufactured carved woodwork.  The door lintel and first floor cornice are essentially identical to the De Forest house.  To the right of the entrance an intricately carved teakwood plague announces the building's name, the Ava, along with two trios of elephants. 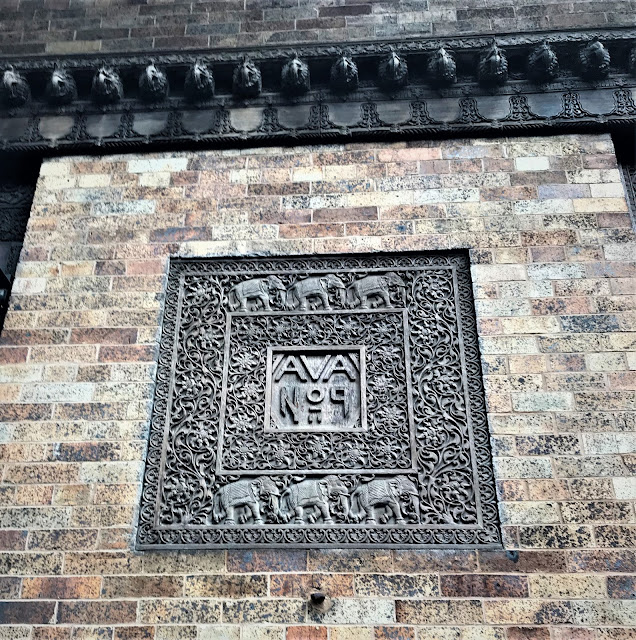 The complex teak carving was used on this level to frame the windows, on the second floor as a thin compliment to the brownstone band course, again on the fourth floor above the lintels, and finally in the sumptuous brackets of the teak wood terminal cornice.  Handsome designs disguised the iron fire escapes as balconies at each level.
Even without the exotic carvings, Renwick, Aspinwall & Russell's treatment of the façade would have stood out.  The variegated ironspot beige brick was contrasted with red-toned stone bandcourses and lintels.  Coupled with the teak accents, what might have been a rather ordinary Renaissance Revival structure was anything but.
The building was barely completed when it was threatened.  On October 4, 1888 The Press reported, "The third fire in the new building, 11 East Tenth street, known as the Ava flats, was discovered and extinguished Monday night."  David B. Thomas had been hired as the night watchman of the still-vacant structure, but it appears he was intent on burning it down, instead.
The watchman of the building next door, Edward Willoughby, had caught Thomas setting a fire in a room in the middle of the first floor a week earlier.  Willoughby now kept his eye on the Ava and foiled a second attempt and then a third.  It appears that this time Willoughby had had enough of Thomas's arsonist tendencies.  He did not inform police of the last attempt until four hours later.  When they arrived Willoughby said that Thomas had fallen down the cellar steps in front of 9 East Tenth Street "while drunk."
The Press reported, "The police found that two of Thomas' ribs had been broken and that he had received other serious injuries."  He was arrested and held in the hospital where "he did not deny that he had fired the building."  The article continued, "He positively asserted, however, that two men threw him down the cellar."
The Ava filled with well-heeled residents.  Among the first were Robert Albert McKim and his wife, the former Caroline Remsen.  An engineer, McKim was the nephew of well-known architect Charles Follen McKim and the Assistant Engineer on the New Croton Aqueduct.  The couple was still here on June 8, 1895 when their daughter, Margaret Remsen, died shortly after birth.
Another initial resident was Mary Elizabeth Garrett, founder of the Byrn Mawr School, a private college-preparatory school for girls in Baltimore.  The daughter of John W. Garrett, president of the Baltimore and Ohio Railroad, she was an ardent suffragist, often withholding donations to institutions until they agreed to her feminist conditions.  The money she gave to Bryn Mawr College in Pennsylvania, for instance, came with the condition that her intimate life companion, Martha Carey Thomas, be appointed its president.
Residents of the Ava maintained country homes.  On September 21, 1889, for instance, The Evening Telegram reported, "Mr. and Mrs. Mortimer Johnson will return from Wilmurt Lake, in the Adirondacks, to their home No. 9 East Tenth street, October 1."  And on June 15, 1900 The New York Press announced, "Mrs. George Kent closed her home at No. 9 East Tenth street yesterday, and will go to her summer home, Windover, at Black Rock."
Living here that year were the socially-visible James Sheldon, his wife, the former Emily Josephine Adam, and their daughter Cecily.  Their country estate was in Oyster Bay, Long Island.  Cecily's debut took place in the winter season of 1903-04 and she immediately sailed (somewhat shockingly, alone), for Europe.  On April 16, 1904 The Globe and Commercial Advertiser, in reporting that the Sheldons were preparing to open the Oyster Bay house, said, "Their daughter, Miss Cicily [sic] Sheldon, who has been travelling abroad since January, is expected to return in June."
Just before Cecily's debut, James Sheldon sailed to for England.  The Sun noted that he "is a member of several clubs, both here and in London."  That summer season in Oyster Bay must have been a tense one.  The following year, on July 30, 1905, The Sun reported that Emily had filed for divorce saying the action "is believed to be based on his conduct in England."
The article added, "Mrs. Sheldon is a member of the old Adam family of Long Island...She is rich in her own right, and owns the family property on the north shore of Long Island."  Society was no doubt shocked at the turn of events, The New York Press saying that when Cecily came out, "there was no hint of domestic trouble."  The divorce was granted in 1906 at which time The New York Press recalled, "The Sheldons, who move in society here and in London, formerly lived in a pretty house in No. 9 East Tenth street, and were prominent in the Washington square set." 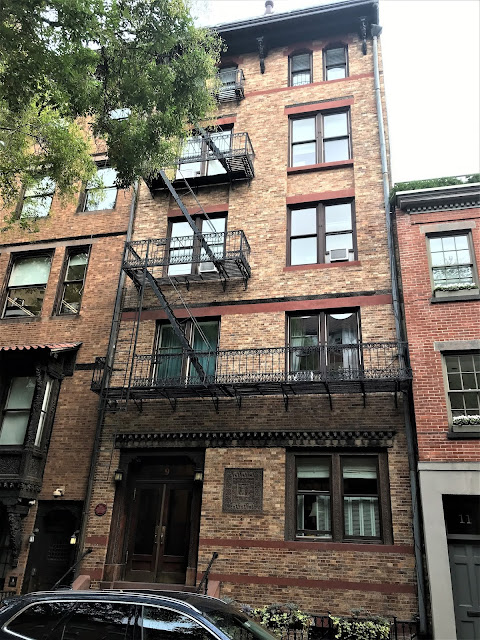 Living here in 1907 were wealthy broker Grenville Parker and his wife, the former Eleanor Montgomery.  Eleanor routinely walked her dogs in Washington Square.  On March 4 that year,  her focus turned from her dogs to a lame horse when she saw the wagon driver whipping it and urging it to move on.  The New York Press said the horse was "limping painfully along, drawing a wagon" while the driver, David Rose, urged "the animal to a faster gait, but the beast seemed utterly exhausted and finally came to a stop."
Angered, Eleanor followed the wagon until she found a policeman, and ordered Rose's arrest.  When the wagon came to a stop she "went to the horse's head and petted it," said the article, and "did not seem to mind the fact her handsome gown was trailing in the street."
Rose explained that his employer had insisted that he take the injured horse out.  "I knew the horse was lame, and I told my boss, but he made me drive him anyway.  So what could I do?"
Eleanor's compassion now extended to the driver, as well.  She sent her maid back home with the dogs and accompanied the policeman and his prisoner to the Jefferson Market courthouse.  The New York Press noted the contrast within the courtroom between "the rich woman, stylishly dressed, wearing furs and diamonds, and the driver, whose coat was torn."
She told the magistrate she no longer wanted to prosecute Rose, but his employer, who was responsible for the cruelty.  She pleaded with him to furnish bail for the driver.  (That was impossible, however, since she was the complainant.)  Eleanor convinced the judge to schedule the hearing for that afternoon, after the employer could be brought in, rather than the following day.  "I would rather come back in the afternoon than have this poor fellow locked up all night," she said.
Around this time the Ava was attracting artists.  In 1908 muralist Walter B. Cox and his artist wife Helen Morton Cox were here.  That year Helen exhibited works in the Sixth Annual Philadelphia Water Color Exhibition.  Their summer home was in Still River, Connecticut.   Walter was responsible for the panoramic background for the exhibit of terns and seagulls at the American Museum of Natural History, and the mural decoration in Calvary Church.
In 1922 Charles Lewis Wrenn established his studio in the Ava.  He had previously done illustrations for periodicals like The Red Book Magazine and People's Home Journal.  He had now turned to portrait painting.  On May 6, 1923 The Morning Telegraph's art critic, Lula Merrick, wrote, "To give up a lucrative income as an illustrator in order to advance an ambition to devote his time to creative art, to express himself in color which he had always practiced at odd moments, and to take his chances with the world's acceptance of his sacrifices, are what Charles L. Wrenn did three years ago."  An important commission for him that year was a portrait of actress Dorothy Gish. 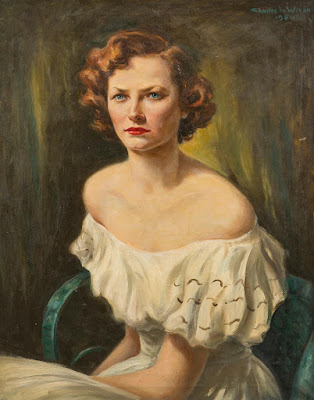 Wrenn painted Woman with Red Lipstick in 1930.
Other artists in the Ava at the time were Helen Dryden, Carl G. Roters and Charles Haftel.  Trained in landscape painting, in 1927 Helen Dryden turned from fine art to commercial design after being inspired by the Paris Art Deco Exposition.  She designed tableware and lamps for the Revere Corporation and interiors for Studebaker automobiles, for instance.  She was described by The New York Times in 1956 as having been the highest-paid female artist in the country.
In 1931 novelist, diarist and playwright Dawn Powell moved into the Eva and would remain until 1942.  While here the prolific writer (she would publish 15 novels) wrote Angels on Toast.  Her biographer, Tim Page, says the Ava was "where she lived when her writing was strongest."
In 1963, according to author Blake Bailey in his Philip Roth, The Biography, "Roth moved into a pleasant second-floor apartment at 9 East Tenth Street."  His wife, Margaret, "fixed the place up with secondhand furniture she bought at auctions and flea markets on Roth's 'pathetic budget.'"
A renovation completed in 1964 resulted in two apartments per floor.  The artistic tenor of the tenant list faded and white collar residents like banker John Bancroft, vice president of the Bank of New York, and David W. Haynes, general director of the Travelers Aid Society of new York, became more typical.
Sadly, in 2000 the property manager of the Ava, Jennifer Markowitz, told The New York Times columnist Christopher Gray, that when apartments were vacated, "we generally gut renovate, with modern fixtures and new sheet-rock ceilings and walls and new oak floors."  And so the surviving paneled ceilings and teakwood fireplaces were in jeopardy.  "It appears that no decorative-arts historian has surveyed the interiors of this unusual building," wrote Gray. 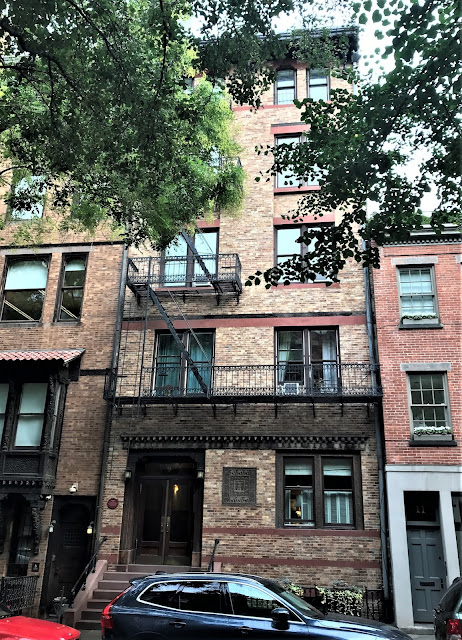 But on the exterior, other than replacement windows, the Ava with its astounding social and artistic history, is beautifully intact.
photographs by the author
no permission to reuse the content of this blog has been granted to LaptrinhX.com
Posted by Tom Miller at 1:25 AM