The Rich History of Small Businesses at 261 Seventh Avenue 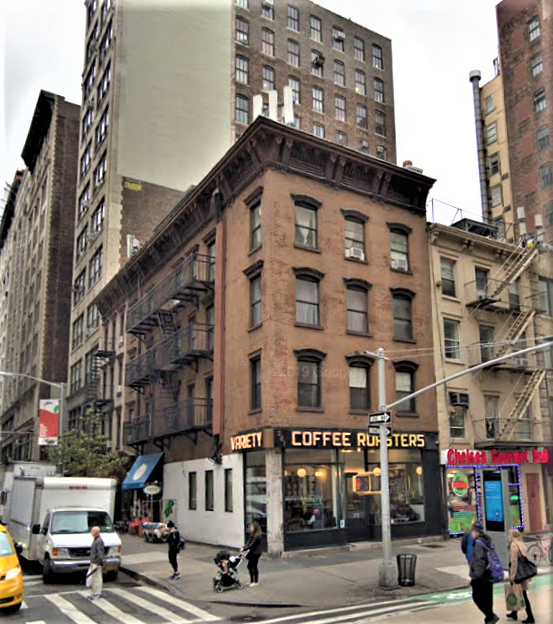 For years the family of Joseph Fuchs lived in the old house at the southeast corner of Seventh Avenue and 25th Street.  Fuchs helped form Battery K Artillery of the First Division of the State National Guard during the Civil War.

In 1874 merchant John N. Heubner diversified by trying his luck at real estate development.  In September he purchased 261 Seventh Avenue from Jacob Fuchs for $13,250, or just over $300,000 today.  Within days Daniel Kelly sold him the property directly behind at 168 and 170 West 25th Street.

A month later, architect Louis E. Duenkel filed plans for two adjoining buildings: a four-story brick store and tenement at 261 Seventh Avenue, and a second behind it at 168 West 25th Street.   Duenkel designed the seamlessly-matching structures mainly in the Italianate style.  The red brick facades were trimmed in brownstone on the 25th Street side, while the windows of the more visible Seventh Avenue elevation were given decorative cast iron lentils.   An up-to-date neo-Grec style cast iron cornice capped the designs.

It appears that Heubner was over-optimistic about his new venture.  On November 5, 1875, just as the new buildings were being completed, the New York Herald reported on his bankruptcy.  "The principal cause of his failure was unlucky investments in real estate," said the article.

The corner building had a shop in the ground floor and another, smaller one, toward the rear.  That store shared the address of 170 West 25th Street with the residences upstairs.

In the mid-1880's the main store was home to George Kessler's barbershop.  In the dark of the night on January 6, 1886, John Foley broke in and made off with "razors, shears and articles to the value of $45," according to police.  The heist would be worth just over $1,250 today.   He sold the loot to two other barbers.  Unfortunately for Foley, he was identified and arrested.  His $1,000 bail awaiting trial far outweighed his profits.

At the time the rear store was a "depot," or retail shop, of the French-based Girondin Deodorizing & Disinfecting Company.  At a time when small-pox posed a significant and deadly threat, the formula was embraced by various cities, including the Baltimore Department of Health, whose head, Dr. Milton N. Taylor pushed his city to purchase it in bulk.


The apartments above the stores filled with low-income families, many of them immigrants.  A century before laws demanded window guards and other precautions, tragedy visited one Irish family.  On July 28, 1886 The Evening Post reported "Katie Cassidy, a babe less than two years old, was instantly killed this morning by falling from a window at No. 170 West Twenty-fifth Street."


Jacobi did work for theatrical manager, producer and director George W. Lederer in 1893.  The problem for Jacobi was that he never got paid.  And so, on October 9 he strode into Lederer's Broadway office and demanded payment.   It did not go well for Jacobi.

The Press reported that Lederer and Jacobi "quarreled yesterday...Mr. Jacobi said Mr. Lederer owed him money.  The theatrical manager had a policeman eject his visitor."  But it went further than merely being ordered off the premises.  "Mr. Jacobi was locked up until friends furnished bail."

Samuel Jacobi remained in 170 West 25th Street at least through 1896.  In the meantime, John C. Lankenan replaced the barbershop in the front store with his grocery.  He obtained a permit to keep a fruit stand on the sidewalk in front of it in November 1895.

Nevertheless, a barbershop did continue at the address.  Lankenan leased the basement level to Laurent Pellegrin.  To the rear of his subterranean barbershop was a bedroom where he slept.  For several years the French-born barber had been the chief barber on the French liner La Touraine and in that capacity had shaved some of New York's wealthiest citizens, including George Gould.  John Lankenan commented that among Pellegrin's "most treasured possessions [were] testimonials from some of the most prominent men in New York."

In 1897, Pellegrin fitted up his elegant barbershop with new chandeliers with modern "patent jets."  By a pull of a chain, the gas could be turned on or off.  Not long after Pellegrin completed his renovations, his landlord saved his life.  While setting out vegetables in his sidewalk stand early on the morning of October 1, 1897, Lankenan smelled a strong odor of gas.  He traced it down the steps to the barbershop.

The Rochester Democrat and Chronicle reported "Going down the stone steps to the double glass doors at the bottom, Lankenan found that the odor of gas became stronger.  He shook the door and called to Pellegrin, but got no response."  Looking through the doors he could see that the barber's bedroom door was slightly open and feared he was unconscious or already dead.  "Applying his shoulders to the doors he burst them in, and going into the back room found Pellegrin lying in the bed unconscious.  The rooms were filled with gas."

The new-fangled patent gas jet had not worked properly.  When Pellegrin pulled the chain on one, the flame went out but the gas continued escaping.  Once taken outside, Pellegrin revived, but he was too weak to speak and was removed to the New York Hospital.  The article praised his landlord saying that Pellegrin "had a narrow escape from death by asphyxiation" and that the "timely discovery of his peril by John C. Lankenan, a grocer, saved him."

By 1899 Samuel Jacobi had left the rear store and it was home to fortune teller Madame Moore.  Her advertisement in The World on December 2 that year read "Parisian palmist, card reader; most accurate; 50¢, $1."  Madame Moore was pricier than most of today's storefront readers, her $1 services equal to more than $30 today.

John C. Lankenan's grocery store had been replaced by the drugstore of Paul O. Krause by 1915.   He and other store owners along the avenue were already dealing with the inconveniences caused by the construction of the Seventh Avenue subway that year when disaster struck.

Just before 8:00 on the morning of September 22 a massive explosion between 23rd and 24th Streets sent planks soaring into the air.  A huge crater swallowed a crowded trolley car and a brewery truck.  Seven passengers of the trolley were killed and 85 other people were injured.   The man in charge of dynamite blasting, August Midnight, fled the scene and still could not be found several days later.

Paul O. Krause's drugstore was shaken as if by an earthquake.  He told reporters "I ran out to the street and saw chaos in the hole where the street had been.  People were swarming over the splintered woodwork and the smashed street car seemed alive with crawling human beings."  Krause offered his pharmacy as a sort of triage space.  "A dozen of the injured were brought into the store here, most of them unconscious and with their legs and spines crushed, and the ambulance surgeons treated them and then rushed them away to the hospitals."  While doctors worked on the injured, civilians swarmed the drugstore to use Krause's several pay phones.   He said "people ran into the store and tried to telephone, but all of the telephones but one were put out of commission by the accident."

Following World War I the drugstore was replaced by Bernstein & Feldman's fur store.  On a January night in 1921 Patrolmen noticed two well-dressed young men, Morris Geroff and Abe Feldman, leaving the building with $15,000 worth of furs (more in the neighborhood of $214,000 today).  Following their arrest Magistrate Sweetser of the Jefferson Market Court gave the officers "high praise" for nabbing the pair, whom police said "are responsible for many of the fur loft robberies."


Four months after the robbery, on May 27, the New-York Tribune reported that Bernstein & Feldman was bankrupt.  The firm reorganized as Jaffe & Bernstein, but that, too, failed.  The partners declared bankruptcy in April 1922.

At mid-century the store was once again a barber shop.  And then around 1975 Truemark Discount Fabrics moved in.  The Fashion Institute of Technology had erected its nine-story school building a block to the north in 1959.   The fabric store would be a go-to resource for students for decades.

But in 2016, as was the case with so many small businesses in Manhattan, increasing rents forced the 40-year tenant to relocate.  An employee said that moving would involved "packing up the thousands of fabric bolts."  The store was replaced by Variety Coffee Roasters, a coffee shop with a neon sign that suggests it has been here for half a century.

photographs by the author
LaptrinhX.com has no authorization to reuse the content of this blog
Posted by Tom Miller at 1:09 AM