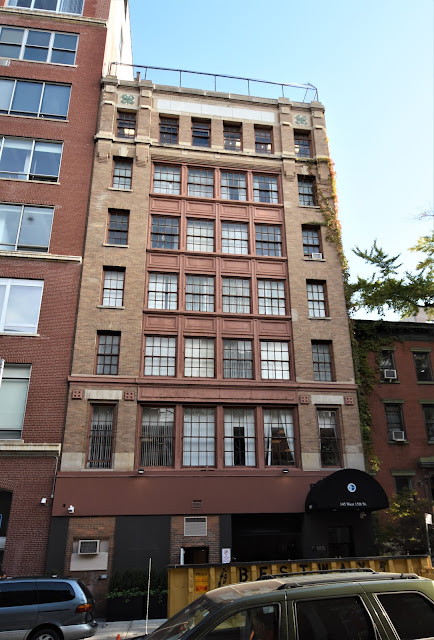 In April 1909 Eliza Jencks Lowden purchased the two high-stooped houses at 143 and 145 West 15th Street, between Sixth and Seventh Avenues.  Four months later architect H. C. Pittman filed plans for a seven-story warehouse to cost $65,000--just under $2 million in today's dollars.
Eliza was the wife of James Morton Lowden, head of J. M. Lowden, Inc.  The firm operated operated warehouses for freight headed to or coming from steamships and freight trains, and this site would be one of them.
Completed the following year, Pittman's utilitarian building could almost be mistaken for a school.  A subtle blend of Colonial Revival--seen in the discreet splayed brick lintels and their stone counterparts at the sixth floor, for instance--and Arts & Crafts, it was faced in yellow brick.  The central section of the second through sixth floors was unified by metal infill that framed the windows and provided paneled spandrels.  Four brick piers added dimension to the top floor where terra cotta shamrocks announced Lowden's monogram. 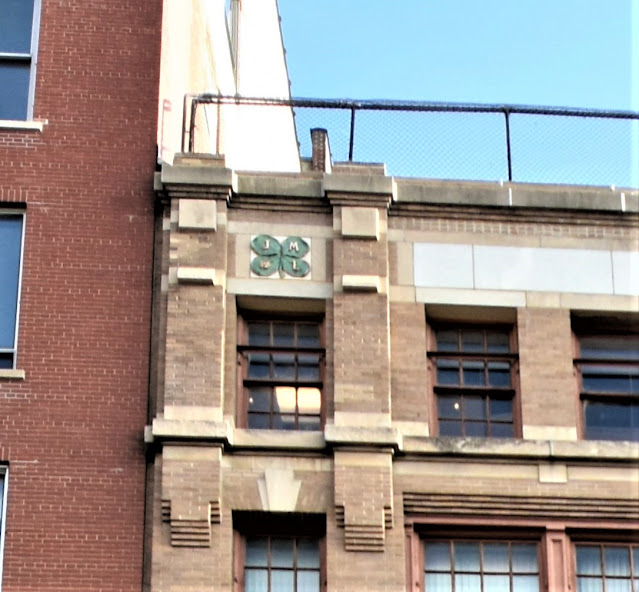 Eliza J. Lowden died on June 26, 1913, leaving her entire estate to her husband.  Included was 143 West 15th Street, valued at $2.3 million in today's money.
James was one of the 65 members of the New York Team Owners' Association, "who have 1,500 horses and auto trucks hauling freight," according to Trade and Transportation in 1913.  The steamship lines and railroads by now had established their own freight warehouses and not-so-subtlety tried to edge out their competition.
In November 1913, James Lowden testified before the Interstate Commerce Commission in Washington D.C. with the New York Team Owners' Association, along with its president, secretary, and another member.   Among their complains, according to Trade and Transportation, was "that the carriers show favoritism to certain team and truck owners, allowing them to drive past teams having prior position in line."
Typical of J. M. Lowden & Co.'s clients was the Blackstone Valley Co.  In its May 1920 issue, The Motor Truck described the problem of freight headed for Philadelphia from New York.  To avoid the delays faced by freight barges, or "lighters," attempting to pass through the Raritan Canal, the firm contracted J. M. Lowden & Co. to truck their freight.  The article said "two or three trucks from that concern run daily to Philadelphia with shipments taken from Rhode Island to New York by boat."
James Morton Lowden had died a few weeks before that article, on April 18, 1920.  The firm continued, operated by its directors, but changes were coming.  By the end of the year the Segwick Machine Works shared space in the building.  Perhaps to accommodate its new tenant, J. M. Lowden & Co. relocated its main offices to West 22nd Street.
The warehouse received a shipment of textiles late in 1924.  On December 24, The Evening Post reported, "Robbers, it was learned today, forced their way into the warehouse at 143 West Fifteenth street last Friday and carried off more than $60,000 worth of woolen and worsted material.  The goods were the property of about thirty woolen mills."  The massive theft would equal $908,000 today.
The gutsy burglars, according to detectives, had forced open a side door, then "opened the double front doors from within, had backed an automobile truck inside the warehouse, and had driven it away loaded with rolls of cloth."  The detectives added, "There was no watchman in the warehouse."
J. M. Lowden & Co. operated from the building into the 1930's.  Sedgewick Machine Works remained until 1943 when the building was sold on April 1.  It became home to the Jurgensen Mfg. Co., makers of kapok-filled life preservers. 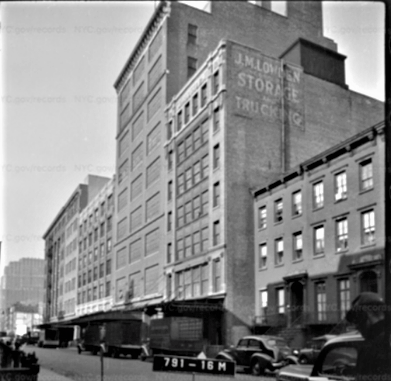 In 1941 an overhanging freight awning sheltered trucks as they were loaded and unloaded.  A painted sign for J. M. Lowden & Co. survived on the side.  photo via the NYC Dept of Records & Information Services.
Around 1955 the H. B. Davis Corporation moved in.  The firm filled the warehouse with a variety of goods, then printed a mail-order catalog.  But the business was a bit different than normal mail-order firms.  The sample catalogues were sent to potential investors.  An advertisement in Billboard on May 7, 1955 said, "Space is provided on the cover for the imprinting of your own name and address.  This catalog costs you nothing and it puts you in a business that can repay you thousands of dollars!"
Potential clients were urged, "Distribute your own catalog of name brand merchandise through your sales force, or take orders with it yourself."  The orders were then filled by H. B. Davis Corporation and sent directly to the consumer.  The concept worked and H. B. Davis Corporation operated here until 1968 when the Salvation Army took over the building.
The warehouse was converted to the Salvation Army's archives, research center, and certain offices.  The freight canopy was removed and the ground floor remodeled.
Just before 6:45 on the morning of September 7, 1972, Brigadier William Benton and Captain Ivor Rich, the financial secretary for Greater New York, waited on the West Hempstead platform of the Long Island Rail Road.  Benton, according to The New York Times, was the "newly appointed men's social service secretary for The Salvation Army's Eastern Territory."
The men were headed to 145 West 15th Street where Benton was to start his first day on the job, taking over from Lt. Colonel William Charron.  Sadly, the 59-year-old would never make the trip.  Before the train arrived he suffered a fatal heart attack on the platform.
The Salvation Army remained in the West 15th Street building until 1991 when it became headquarters for the Puerto Rican Family Institute.  The organization was founded in 1960, according to the Encyclopedia of Minorities in American Politics, "to meet the health needs of Puerto Rican and Hispanic families within the United States."  The group operates mental health clinics, migrant family assistance and "social work, educational, psychiatric, and psychological services."
On June 9, 1991 The New York Times reported that the performance of Charge It Please at the Puerto Rican Traveling Theater on West 47th Street would benefit the Puerto Rican Family Institute.  "Proceeds will be used to renovate the institute's new building at 145 West 15th Street," said the article. 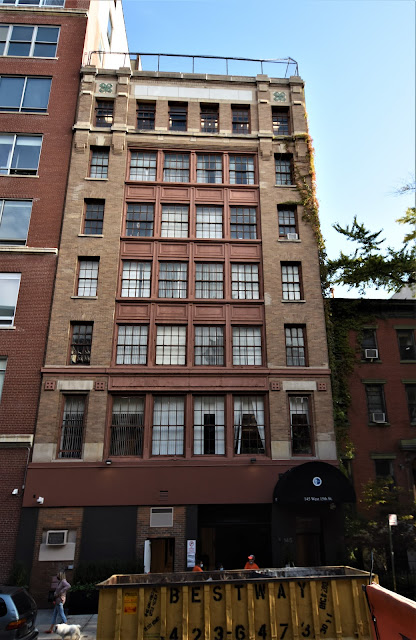 The Institute remains in the building.  And while the ground floor has been necessarily and significantly altered, H. C. Pittman's handsome 1910 design survives intact on the upper floors.
photograph by the author
LaptrinhX.com has no authorization to reuse the content of this blog
Posted by Tom Miller at 1:13 AM