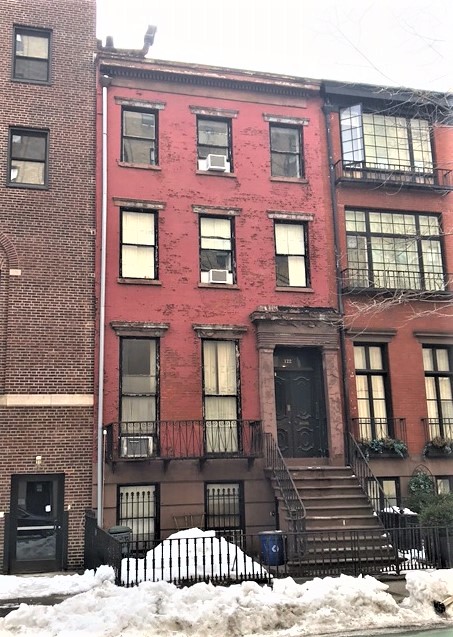 In 1848, after completing a row of Greek Revival houses on West 13th Street between Sixth and Seventh Avenues, builder John Hanrahan bought land on the opposite side of the street from the estate of Elizabeth Walsh and began a similar row of six houses.  Three stories high, they were faced in red brick above a brownstone basement level.
No. 98 West 13th Street (renumbered 122 in 1868) became home to Charles E. Grant.  Born on March 16, 1811, he had married his wife, Jane, around 1837.  The couple had two sons.
Sadly, Jane died five days before Christmas in 1852 at the age of 35.  Her funeral was held in the house on December 22, followed by a service at the 13th Street Presbyterian Church.

Shortly afterward, Charles took his sons west to Illinois.  The 13th Street house became home to William H. and Maria W. Morris.  The comfortable lifestyles of the residents along the block were evidenced in help wanted advertisements placed by Maria.  One, on September 28, 1858, read, "Wanted--By a family of two, a perfectly competent waitress and chambermaid who understands sewing; very best reference required."  And six months later,  on March 22, 1859, she was looking for "A seamstress by the day, in a private family; one who understands fine sewing, and can bring good references."
When she placed that advertisement, Maria had just given birth to the Morris's first child, William Henry.  Tragically the baby died at two months of age and the parlor was the scene of another funeral on May 7.
At the time, Daniel Stinson had served in the United States Army since 1821.  Born in Dunbarton, New Hampshire in 1797, he came to New York City at the age of 22 and in 1822 entered the United States Army's Quartermaster's Department.  With the outbreak of Civil War, the 64-year-old was made assistant Quartermaster.
Three years after the end of the war, in 1868, Secretary of War Edwin M. Stanton promoted him to the rank of colonel "for faithful and meritorious services during the war."  By now, Stinson and his wife, the former Maria V. W. Churchill, had lived in the West 13th Street house for four years. The couple, who had married on December 17, 1828, had no children.
Not surprisingly, Daniel Stinson was deeply patriotic.  Following the shooting of President James A. Garfield in 1881, Stinson read that an Akron, Ohio newspaper had launched a "one-cent subscription" to raise funds for a gift of appreciation for Captain C. A. Cook who had slapped the mouth of a man named Morrison "for wishing Garfield would die."  The fund drive asked for a penny from each reader to help purchase a gold watch for Cook.  Stinson did far better than a penny.  The Summit County Beacon reported on September 14 that he had sent in $10--more than $250 in today's money.
In the summer of 1891, Stinson fell ill and his condition quickly deteriorated to pneumonia.  On August 22, The Fall River Daily Herald entitled an article "Died In The Harness" and reported, "Colonel Daniel Stinson is dead.  Up to this week he was able to be about and attend to his affairs although he was 94 years old."  The article noted that he "was for more than fifty years connected with the quartermaster's department of the United States army in New York city."
Maria remained in the house until her death on June 10, 1893.  As had been the case so many times in the past, her funeral was held in the parlor three days later. 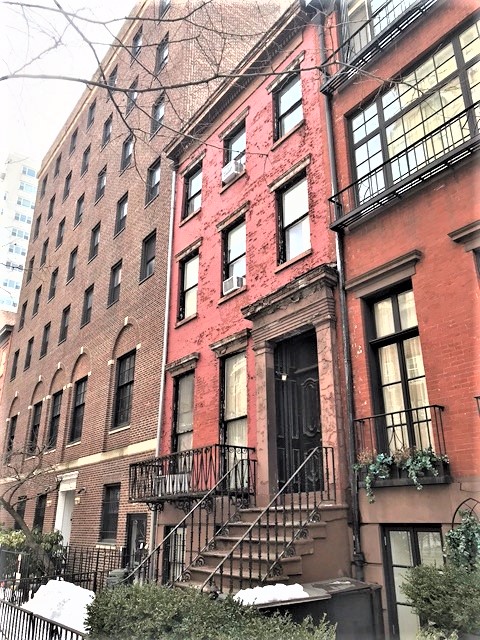 The Stinson estate sold 122 West 13th Street on December 30. 1894 for the equivalent of about $592,000 today.  It became home to art dealer Roland F. Knoedler, proprietor of M. Knoedler & Co.
Knoedler's father had co-founded the firm in 1846.  In 1903 The Finance and Commerce of New York and United States wrote, "When the business was first established the late M. Knoedler was the only connoisseur who sold original oil paintings from the various European schools.  American art owes a great deal to him, for from the beginning he devoted great attention to American paintings, and fostered and encouraged native art."
Knoedler's gallery was by now famous for selling Old Dutch and Italian art and 18th century English paintings.  Works by Sir Joshua Reynolds, Gainsborough, Titian and Rembrandt were among those that were displayed on its walls. 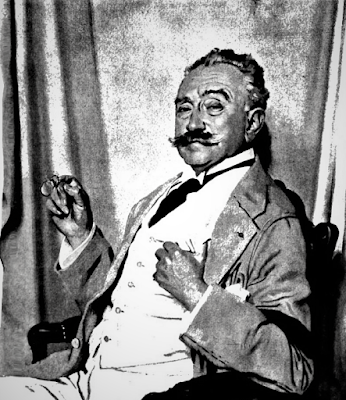 In 1923 Sir William Orpen's portrait of "The Dean of the Art World" "attracted much attention at the last Royal Academy exhibition in London."  The Spur, October 15, 1923 (copyright expired)
Early on Saturday evening, June 30, 1900 a messenger frantically knocked on the door of 122 West 13th Street hoping to find Knoedler at home.  Unfortunately, he was not in.
Earlier that day Mary E. Hurst had visited the Fifth Avenue gallery to browse among the artworks.  Just before noon its manager, Mr. Rose closed the gallery for the day.  Neither he nor his five employees realized that someone was still inside.
When she realized she was alone, Mary left the gallery.  The inner hallway door had a spring lock which closed behind her and the heavy street door was securely locked.  Mary was trapped in the small vestibule.
The New York Herald reported, "Fashionably attired women driving in Fifth avenue alighted from cabs and broughams and gathered in front of the door trying to comfort the imprisoned woman, who, in tones that grew weaker every moment, begged to be liberated, as she feared she would faint or suffocate."  Dozens of patrons of the Waldorf-Astoria Hotel across the avenue swarmed the sidewalk in front of the Knoedler & Co. gallery.
Mary was finally rescued by a policeman who entered the mansion of Mrs. Edward King, next door, made his way across the roof of the Knoedler building and pried open the scuttle.  Eventually he was able to retrieve Mary Hurst and bring her up to the roof and back through the King residence.
Roland Knoedler spent more and more time in Paris (much of it spent searching out masterpieces for his prime client, Henry Frick).  By 1909 Dr. Waldo H. Richardson was living in 122 West 13th Street.
It was sold to Domenica Cella in 1914, who leased it to Dr. William C. Halleck in 1916.   The 66-year-old physician had just walked out on his wife, Elizabeth, to whom he had been married since 1877.  The couple had seven children.
In February 1917, Elizabeth very publicly filed for divorce, naming "Madam Ruth Hausman" as the other woman.  She told the courts that her husband's income was as much as $10,000 a year--around $200,000 today.
Following the divorce, William and Ruth were wed, but it would not be a long-lasting marriage.  Dr. Halleck died in the 13th Street house on March 6, 1920. 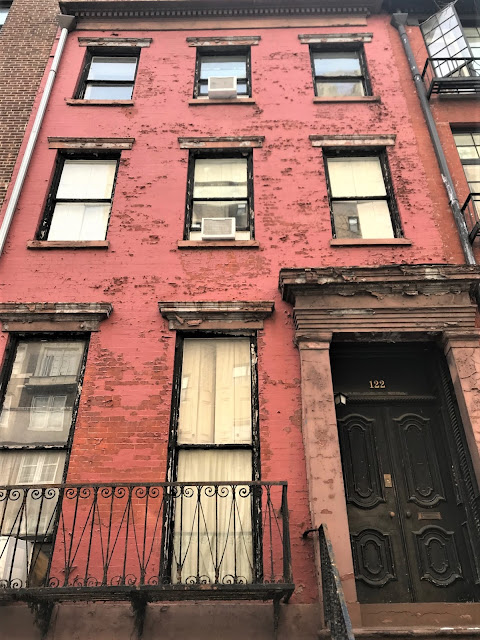 Domenica Cella sold No. 122 that year to Charles I. Taylor.  In 1941 it was converted to apartments.  Although a coat of 20th century paint that peels away from the brick and brownstone gives the house a neglected look, many details surprisingly survive--like the interior shutters of the parlor and second floors, the paneled entrance doors, and the cast iron balcony.
photographs by the author
no permission to reuse the content of this blog has been granted to LaptrinhX.com
Posted by Tom Miller at 1:33 AM