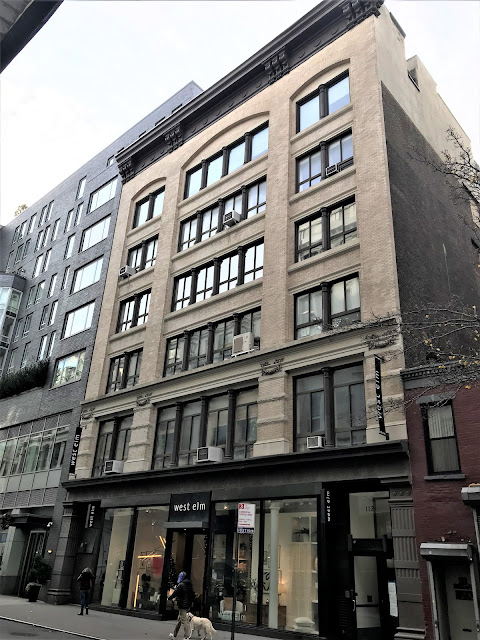 West 18th Street, between Fifth and Sixth Avenues was a "stable block" in the mid-19th century.  It was lined with the private carriage houses of well-to-do Fifth Avenue residents, and with livery stables.  But things were changing in the 1880's, as palatial emporiums rose along Sixth Avenue and Fifth Avenue mansions were being converted to businesses like art galleries and dressmaking shops.
On August 16, 1899 Edward Jansen purchased the three two-story brick stables at 112 through 116 West 18th Street for $60,000--about $1.9 million today.  Two weeks later, acting as his own architect, he filed plans for a six-story building, the cost of which would double his investment.
On September 9, 1899, even before demolition had begun on the old stable buildings, the Real Estate Record & Builders' Guide reported, "A printing house has leased the 6-story building which Edward Jansen is about to erect at Nos. 112 to 116 West 18th street."  That firm was the Grannis Press, Inc., the owners of which, Herman Wheaton Grannis and John W. Grannis, almost assuredly had input on the design of the structure.
Completed in 1900, Jansen's Renaissance-Revival factory and store building was faced in beige brick.  Bands of undressed stone created a striped effect to the piers of the second floor, each of which was decorated by delicately carved swags.  Grouped windows with engaged cast iron columns rose in three vertical sections, giving visual height to the structure.
The building's proximity to the department stores of what would be called the Ladies' Mile, was a significant consideration to any potential ground floor tenant.  On September 5, 1900 The Evening Telegram entitled an article "A Fine New Restaurant" and reported, "A new restaurant will be opened by F. A. Archambault at Nos. 112, 114, and 116 West Eighteenth street, opposite the Eighteenth street entrance of B. Altman & Co.'s store, Saturday next."  The writer opined, "This will be a great convenience for the shopping district," adding, "It is promised that the prices will be moderate, the cuisine excellent and the service unsurpassed."
Reed's Restaurant catered not only to the feminine patrons of Sixth Avenue, but to dinner parties and private groups.  On January 30, 1902, for instance, The Vegetarian Society hosted the first of its annual dinners here.  The Brooklyn Daily Eagle said that the 100 guests "well represented the best social element of both Manhattan and Brooklyn."  Non-meat diets were somewhat novel at the time, and the article noted, "One of the features of the evening which elicited much merriment was a vegetarian song, by George Bushwick."
The following year the eatery became Hunter's Restaurant, although little changed other than the name.  On April 25, for instance, a dinner was held in honor of William S. Devery by a group supporting his run for mayor.  The menu was notably different from that of The Vegetarian Society's dinner.  The Daily Standard Union reported, "Beefsteak was the 'piece de resistance' on the bill of fare."
Two weeks earlier the restaurant had seen much excitement.  On Saturday night, April 4, ten waiters were fired.  In solidarity, 29 others walked out.  The owners found replacements to fill their places before Monday afternoon and business went on as usual--until the 39 out-of-work waiters showed up outside.
The men harassed potential patrons, warning them, according to The Evening World, "The grub is on the bum!" or "It's poison!" and "You ought to see where they cook it!"  When the manager was unable to disperse the men, he called the police.  The newspaper said, "The waiters broke and ran when the wagon arrived."   Waiters were pursued by police in different directions, the chases going on for blocks.  The sight "served to highly amuse the large crowd of women who were about in the shopping district," said the article.  A dozen of the protestors were arrested and things returned to normal in Hunter's Restaurant.
Grannis Press, Inc. remained in the building until 1905, afterward replaced by several apparel firms.  Among them were Striker Manufacturing Company, makers of women's neckwear; and L. Dofflien & Co.  L. Dofflein placed an advertisement in The New York Times on March 26, 1905 that read, "Girls just from school to learn making negligee wear; pay while learning."
In the summer of 1910 Edward Jansen filed plans for a six-story building at 113 to 119 West 17th Street, directly behind his West 18th Street structure.  This time he hired the architectural firm of Rouse & Goldstone to design the building, which cost him the equivalent of $2.8 million in today's money.  The resultant structure was designed as a similar, simplified version of 112-116 West 18th Street.  Combined internally, the floorspace was now doubled. 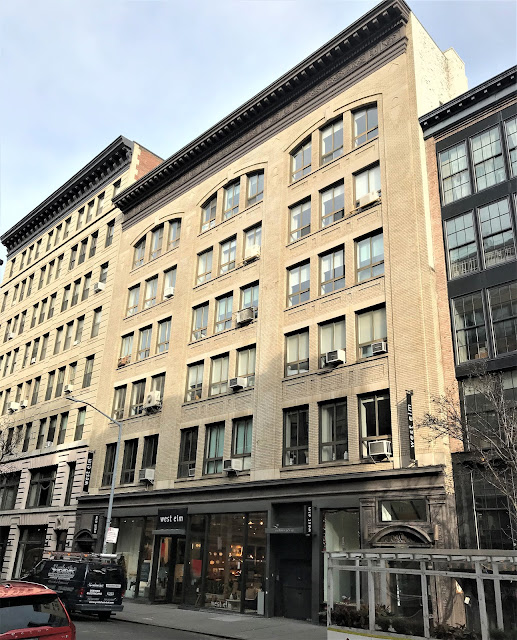 Rouse & Goldstone closely followed the design of the original building in the 17th Street extension.
The 15,000-square-foor ground floor space was leased to the United States Post Office before construction began.  On July 2, 1910 the Record & Guide reported, "the premises will be occupied by Post Office Station 'O,' now at 5th av. and 17th st."
A letter mailed shortly before midnight on August 17, 1913 was, perhaps, the most significant piece of mail that passed through the post office branch.  Harry Kendall Thaw, who had been found not guilty of murdering architect Stanford White in June 1906 by reason of insanity, was committed for life at the Matteawan State Hospital for the Criminally Insane.  In August 1913 he simply walked out and escaped.
The letter dropped at the post office on August 17 was from Thaw to his mother, who was staying at the new Hotel Gotham.  It said:

All well.  Shall take a rest before coming to Elmhurst [the Thaw home in Cresson, Pennsylvania], as I might be asked for interview and do not want to refuse; yet do not care to make any statement.  Hope M. and G. [Margaret and George Carnegie, Thaw's sister and brother-in-law] arrived safe and you will go home together.
H. K. T.

Although Mrs. Shaw shared the contents with police, she also attempted to throw them off the trail.  The Evening World reported, "Mrs. Thaw does not believe her son was in New York last night.  She thinks he scribbled the letter in the automobile in which he made his escape and intrusted [sic] it to one of the men who sided with him to be mailed in this city."
In the meantime, the upper floors continued to house garment manufacturers.  Typical were M. Scher & Co., makers of shirtwaists; H. B. Katzman, manufacturers of cloaks and suits; and Jan Globe Cloak Manufacturing Company.  Also in the building in 1914 was the German Novelty Company, makers of toys.  The Post Office branch remained for decades, a designated spot each year for the purchase of Christmas Seals, part of a fund-raising project to fight tuberculosis.
The combined buildings were sold in February 1942 to real estate operator Nathan Wilson, who resold it two years later to Morris Luskin & Son.  Tenants in the building in the early 1950's included Klein & Co., Inc., makers of candy boxes; and Van Cott Brothers, manufacturers of athletic uniforms and sportwear. 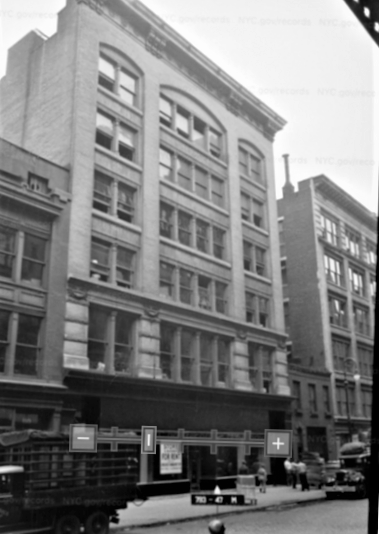 photo via the NYC Dept of Records & Information Services
On November 20, 1962, the Brooks Costume Company merged with the Philadelphia firm of Van Horn Costume Company.  The New York Times reported, "The merger links the two top costume groups in the country," and noted, "the new company, to be known as the Brooks-Van Horn Costume Company, will have offices here and in Philadelphia.  Its facilities will enable it to serve Broadway shows, television, stock theaters, schools, community theaters, state and national events and pageants."
Among the consolidated firm's initial commissions to design and supply the male costumes to Franco Zeffirelli's 1963 production of The Lady of the Camellias, starring Susan Strasberg as Marguerite.  (The women's costumes were designed by Pierre Cardin.)   The firm was still located on East 26th Street at the time.  But by the mid-1970's it had moved into the West 18th Street building. 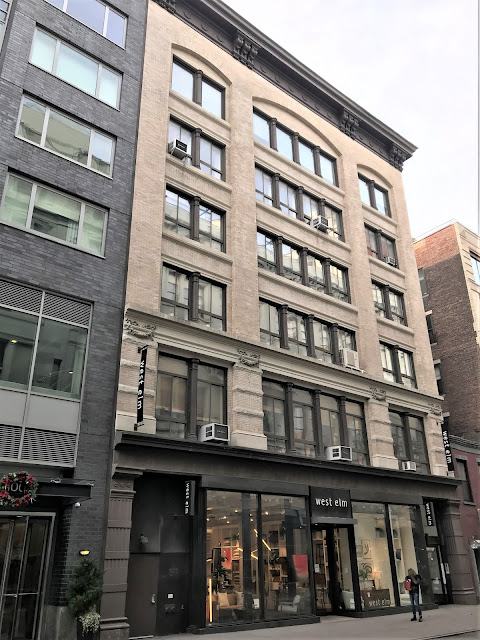 Change came to the combined buildings in December 1982 when a renovation resulted in a total of 35 apartments above the ground floor store.  Known today as the Brooks Van Horn as a nod to the costume firm that did business here for so many years, the building's commercial tenant has been the furniture and décor store West Elm since October 2004.
photographs by the author
no permission to reuse the content of this blog has been granted to LaptrinhX.com
Posted by Tom Miller at 1:16 AM