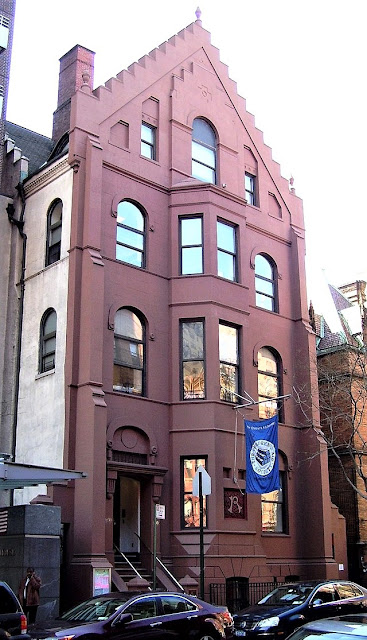 photo by Beyond My Ken
The Children’s Aid Society was founded by Charles Loring Brace, along with a few other concerned men, in 1853.  Brace had been, according to King’s Handbook of New York City, “engaged in teaching some of the little arabs of the streets.”  The Society was incorporated in 1856 “for the education of the poor by gathering children who attend no schools into its industrial schools, caring and providing for children in lodging houses, and procuring houses for them in the rural districts and in the West.”
In 1880 the Children's Aid Society began a major expansion project, erecting lodging houses and industrial schools throughout the depressed areas of the city.
Wealthy, unmarried sisters Julia and Serena Rhinelander, who lived in the family mansion at 14 Washington Square North, devoted their lives to philanthropy.  In 1890 they donated the funds to erect a new Children's Aid Society building in Yorkville.  It was completed the following year, designed by the architectural firm of Vaux & Radford.  Calvert Vaux, best known for his work in designing Central Park, had partnered with George Kent Radford in 1872.
Like most of the firm's Children's Aid Society structures, the Rhinelander Industrial School was designed in the Flemish Renaissance Revival style.  According to architectural historian Dennis Francis, it was Charles Loring Brace who insisted on the step-gabled style, having been impressed by a 16th century structure he had seen in Nuremberg. 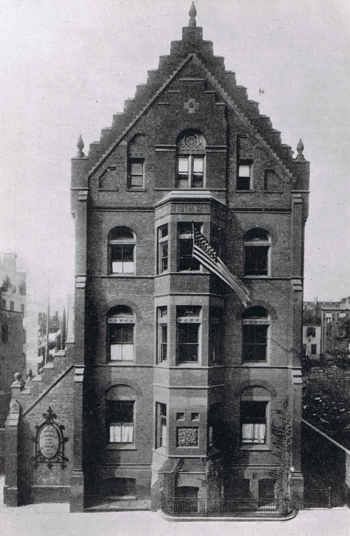 from Documents of the Assembly of the State of New York, 1903 (copyright expired)
The Children's Aid Society recognized the importance of providing tenement children with a means of earning a living later in life.  While the Rhinelander Industrial School taught children (up to 12 years of age) the same fundamentals learned in a public primary school, it also provided training in practical areas--carpentry for boys and sewing for girls, for example.
On February 24, 1893 the school staged an exhibition of the work done by the students.  The New York Times reported, "All the visitors at the schoolhouse in East Eighty-eighth Street--and not alone the parents--have been delighted with what they have seen."  In the carpentry shop were displayed items like a picture frame and a footstool.  "Work in parquetry was also shown," said the article, "including much that had been well-done after original designs."
In the cooking class were laid out "wholesome bread, a roast of lamb, pie, carrots, potatoes, and other substantials that go to make up a hearty dinner."  The principal, Margaret Pickering Pascal, showed the needlework done by girl students.  She "explained the stitching, felling, overhanding and buttonhole work of these girls, and it was a neatly done as the best dressmaker could wish."
At the time of the exhibition, there were 325 pupils in the day school, and about 36 in the evening classes.  (The evening classes were for those students who had gone on to public schools, but wished to continue their classes here.) 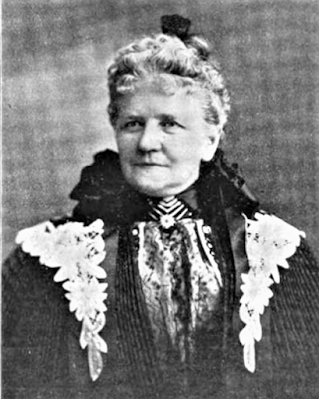 Margaret P. Pascal organized the school.  The Phrenological Journal and Phrenological magazine, June 1897 (copyright expired)
Many, if not most, of the students came from immigrant families, mostly Irish and German.  The "Americanization movement" swept the country in the 1890's, which sought to meld the individual cultures into a single American ideal.  In 1893 Margaret P. Pascal (herself an immigrant, brought to America at the age of 5) climbed on that bandwagon.
On April 23, 1894 The New York Times reported, "'Uncle Sam' will visit the scholars of the Rhinelander School, 350 East Eighty-eighth Street, to-morrow morning, and learn what they have gained from the patriotic teaching received during the school year."  Miss Pascal had sent out invitations "that have on their cover a portrait of George Washington, and the patriotic dictums: 'One Country, one language, one flag,' for patriotic education is a feature of the regular instruction of the school."
The Phrenological Magazine reported in June 1897, "One of the means of instructing children in patriotic work at the Rhinelander School is in making flags and giving the same to patriotic societies and people of prominence with whom they have been brought in touch."  The girls' sewing classes made the silk flags and the boys carpentry shop crafted the staffs. 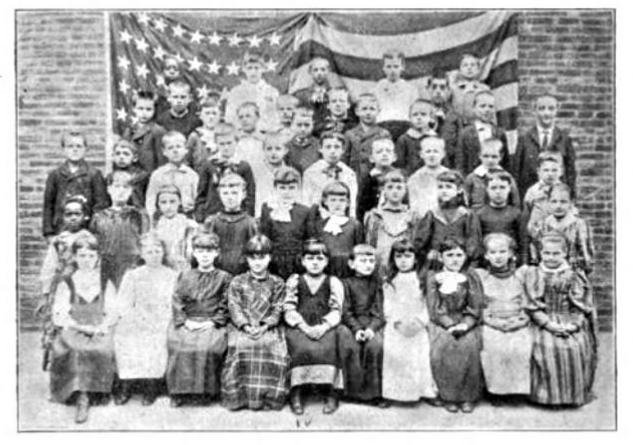 The second grade class poses in front of one of the silk flags.  The Phrenological Journal and Phrenological magazine, June 1897 (copyright expired)
And, indeed, the flags went to prominent figures.  Among the recipients were Elizabeth Cady Stanton, President William McKinley, former President Grover Cleveland, Mayor William Strong, and former Mayor Abram S. Hewitt.  The workmanship of the flags was so impressive that an example was displayed at the World's Columbian Exposition in Chicago, earning a medal in June 1896.
The school expanded in 1900 by opening a class for disabled children.  In October that year The American Journal of Nursing explained, "This is exclusively a class for cripples, and to keep them busy and happy, to teach them something useful, and to lead them in such exercises and games as may not overtax the weak little bodies is the work of the ever-watchful teacher and nurse."  The article noted:

The Children's Aid Society is the pioneer in this much-needed educational work among cripples who are not physically fitted to take their place among the robust children of the public schools, and has provided not only a teacher, but a nurse trained in orthopaedic work, who understands the children and their limitations, and who is fitted to give the daily attention which is absolutely necessary in many cases.

Disabled children, sadly, were often not receiving that "absolutely necessary" attention at home.  A report to the New York State Assembly in 1900 noted, "Many of the parents of these crippled children have no thought, nor do they care for the future of these helpless beings; the fact that they will always be dependent on their family is in itself, in many cases, enough to cause indifference as to whether they live or die."  For that reason, teaching the disabled a trade, like dressmaking or woodworking, was essential.

The disabled children were originally brought to and from class in a  wagon, but by 1910 the school had been supplied with a modern horse-drawn omnibus.  On the afternoon of November 17 that year the children's teacher, May Daly, was chaperoning them home when disaster occurred.  While traveling east on 96th Street, the bus was slammed by a northbound Third Avenue trolley car.
The New York Times reported, "Every window in the 'bus was shattered, and while two of the six crippled children managed to cling to the side seats, the rest, together with the teacher, were thrown out into the street."  The traces, or poles that connected the horses to the vehicle, broke and the driver, George Wilson, was pulled from his seat and dragged several yards by the panicked horses.  The injured were treated on site by an ambulance team from Harlem Hospital, then sent home in a second bus.
A "jewelry trade class" for the handicapped boys was initiated in September 1908.  The Brooklyn Daily Eagle explained, "The work does not require physical strength and most of it can be done seated.  Only the hands are essential, and most cripples are disabled in other ways."
Eight years later the city was swept by a polio epidemic that took the lives of at least 6,000 and left 21,000 with physical disabilities.  Terrence S. Sullivan wrote to The Brooklyn Daily Eagle on September 28, 1916, praising the jewelry trade class.  His letter said in part:

An opportunity to become self-supporting is offered to boys over 14 years of age, who have become crippled in the recent epidemic.  The jewelry trade is taught in a trade class, held in the Rhinelander School...Seven pupils have recently been placed with manufactories, which leaves vacancies.  We feel that the class after eight years, has proven that this is one way of solving the problem of the support of the handicapped.

The Rhinelander School continued to adapt to the changing needs and times.  The Home Thrift Association opened a space in the building in 1937.  At a meeting of the executive board on November 8, its president, Mrs. John Henry Hammond, told a reporter from The New York Times that it was continuing "its work of rehabilitating families in the neighborhood, that last year half of the $8,000 budget had been contributed by the people of the vicinity."  The group provided clothing, food and shelter for familied unable to pay for it.
In 1954 the building was renovated, creating offices, a clinic and daycare on the ground floor, playrooms on the second and third, and a superintendent's apartment and lunchroom on the fourth.  Mid-century architectural sensitivities were not kind to Victorian taste, however.  In 1989, The New York Times columnist Christopher Gray described the renovation as "more like a tale of child abuse."  Tragically, the one-story eastern extension with its stepped gable and large memorial plaque, was removed.
A layer of stucco was applied to the brick facade--a less expensive route than repointing the joints.  The Rhinelander School continued to operate from the building.  Then, in 1989 a restoration/renovation to convert it to the Rhinelander Children's Center sought to restore the facade.  But, according to the project's architect, Anthony Caine, the stucco was impossible to remove.  Instead, the material was scored and tinted to resemble brownstone blocks.
The Rhinelander Children's Center now offered early-childhood classes in clay modeling and cooking, afternoon programs in arts and music, and in the evening, parent-child courses in tap-dancing and pottery. 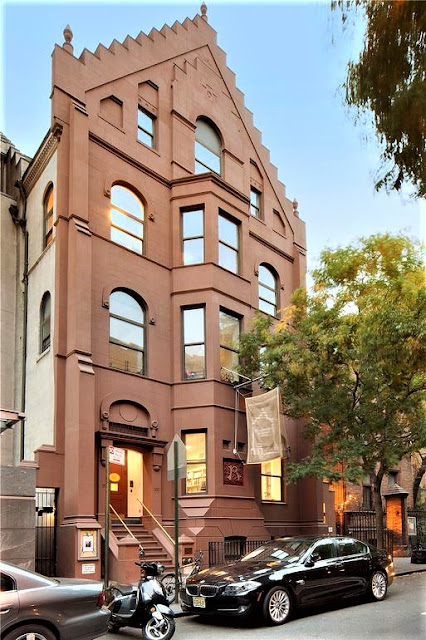 photo via realtor.com
By the 21st century the Yorkville neighborhood was no longer one of tenements and indigent immigrants.  On January 1, 2014 Curbed New York reported that the Children's Aid Society had put the building on the market at $20 million.  Hypothetical floorplans of the building as a single-family mansion were drawn up "so potential buyers can see just how much potential" the building had.  Described by realtors as an "extremely rare, 50'-wide, 4-story mansion," The building was sold for a discounted $15 million.  In 2018 plans were filed for conversion to office use.
LaptrinhX.com has no authorization to reuse the content of this blog
Posted by Tom Miller at 1:20 AM