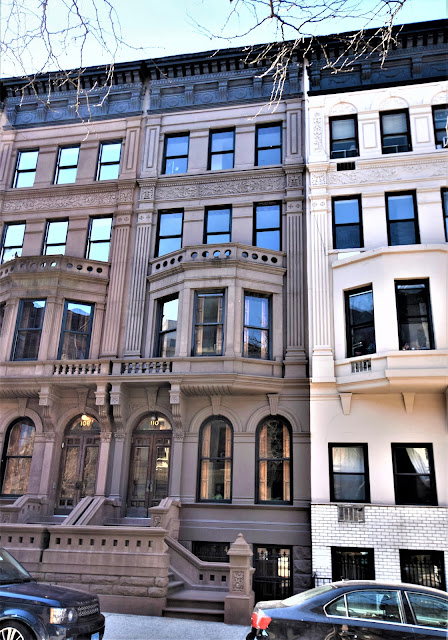 Gilbert A. Schellenger was in his mid-30's when he opened his architectural office in New York City around 1880.  He became a favorite of developers on the Upper West Side, eventually becoming the second most prolific architect in the district.  Among the 45 rows of townhouses he designed on the Upper West Side was a group of four for Julius Gottlieb in 1891.
The brownstone-fronted, high-stoop homes stretched from 106 through 112 West 75th Street.  Designed in the Renaissance Revival style, the openings of the parlor floor created a long arcade along the row.  The mirror-image center houses presented an imposing appearance with their shared dog-legged stoops and the pseudo-balconies that connected the angled bays of the second floor.  Double-height fluted pilasters at the second and third floors, and delicate Renaissance-inspired carved panels gave the four-story homes an imperious presence.
The row was completed in 1892, and Gottlieb leased 110 West 75th Street to Henry Arthur Mauer.  He and his wife, the former Laura L. Yuengling, had two children, Linda Louise, who was six years old in 1892, and Henry, Jr., who was two.
Born in New York City on July 19, 1860, Henry was a partner with his father in the Henry Maurer & Son brickworks.  According to an annual report of the General Society of Mechanics and Tradesmen, the firm was "considered one of the oldest manufactories of firebrick in the United States."  The factory was located in a New Jersey town not coincidentally named Maurer.
Two small children did not prevent Laura from entertaining in a high style.  On February 19, 1896, for instance, The Press reported, "Mrs. Henry A. Maurer of No. 110 West Seventy-fifth street gave the first reception of her series of three yesterday afternoon.  Mrs. Maurer was handsomely gowned in pink and lavender brocade and was assisted in receiving by Mrs. G. C. Claussen and Mrs. Thomas Noland Pell, who wore white satin and brocade."
On January 19, 1902, the New York Herald announced, "A social affair of much importance to take place a week from Thursday next will be the reception and entertainment given by Mrs. Henry A. Maurer, of No. 110 West Seventy-fifth street, to the members of the Auxiliary Committee of the Riverside Day Nursery, which, by the way, has materially enlarged its sphere of usefulness during the present season."
The Maurer family was faced with possible upheaval when, ten months later the "choice and valuable" houses making up Julius Gottlieb's 1892 row were sold at auction.  Happily for them, Henry Maurer placed the winning bid on the house his family had called home for a decade.
Upon the death of Henry's father in 1904, he became president of Henry Maurer & Son.  Brick and Clay Record said of him, "He was a self-made man, leaving school in his sixteenth year, thru necessity, and commencing work in a brick plant with his father."
Linda's engagement to Edwin J. Beinecke was announced in December 1907.  The wedding took place in the Church of the Divine Paternity on Central Park West and 76th Street on April 22, 1909.  (Beinecke would become president of the Sperry & Hutchinson Company, a trading stamp firm.  His collection of Robert Lewis Stevenson materials would become the largest in the world.)
While the Mauers did not own a country home, they were annual visitors to fashionable resort hotels.  On August 26, 1910, for instance, The New York Times reported the the family had arrived at the Mount Washington Hotel in Bretton Woods, New Hampshire "by automobile" today.
Laura was forced to make a difficult and no doubt disturbing decision in 1911.  Her widowed sister, Emma A. Hewes, was suffering from dementia.  Laura and her other sister, Mrs. S. E. Clausen, had her committed to a sanatorium on January 6.  The New York Times reported, "they said Mrs. Hewes suffers from delusions, one being that her husband still is alive, and she is traveling abroad with him."
Henry A. Maurer fell ill in January 1921 and died in the 75th Street house shortly afterward, on January 25 at the age of 61.  Laura and Henry, Jr. remained in the house.  The next year, after the end of the mourning period, Henry's engagement to Stewart Anway was announced.   They were married in 1923. 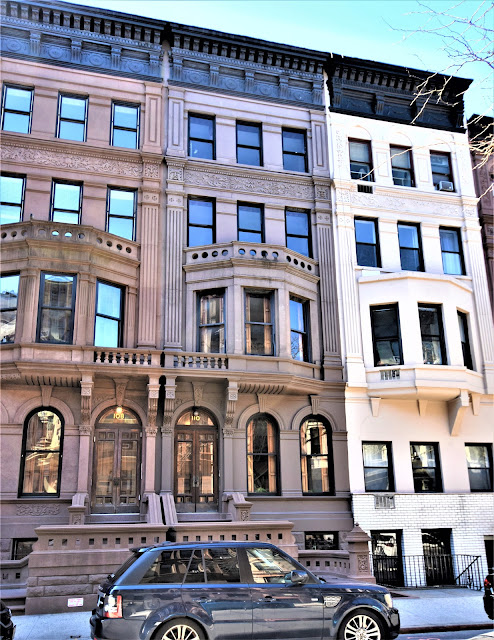 A renovation completed in 1949 resulted in an apartment on the top floor.  The configuration remains today.  Although the brownstone has been painted and the windows replaced, the 1892 residence otherwise is little changed.
photographs by the author
LaptrinhX.com has no authorization to reuse the content of this blog
Posted by Tom Miller at 1:13 AM