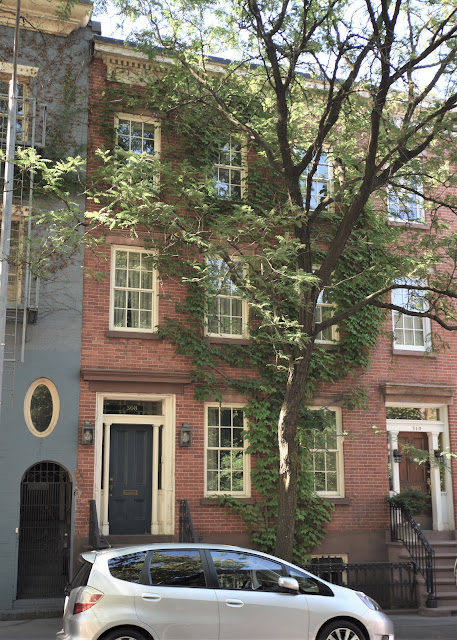 In 1842 Nicholas Brinckerhoff completed construction on three Greek Revival houses at 102 through 106 Hammond Street.  Three stories high above brownstone English basements, the 20-foot-wide homes were faced in brick.  Like their dentiled cornices, the three houses shared identical design elements.  The exception was the entrance of 102 Hammond (its address would become 308 West 11th Street in 1864).  Here the more delicate pencil-like columns between the door and sidelights, and the delicate leading of the overlight, smacked of the earlier Federal style.

It appears 102 Hammond Street was operated as a boarding house almost from the start.  By 1847 Martha Rose, the widow of William Rose, ran the boarding house.  Her boarders that year were Garrett O. House, a carman (the early 19th century equivalent of today's UPS driver), and policeman Thomas Walker.
Operating a boarding house was a common and respectable way for widows to earn a living.  Around 1853 Maria Haring, the widow of William Haring, took over the operation of 102 Hammond.  Her boarders were a bit more professional than those of Martha Rose.  In 1853 they were Henry Vanostrand, a clerk, and bookkeeper Walter S. Cunningham.
Henry Vanostrand would remain for several years.  He embarked on a new venture in 1857, opening a daguerreotype studio on Bleecker Street.  An early form of photography, the daguerreotype was invented in 1839 and provided the general public the opportunity to have portraits made relatively inexpensively. 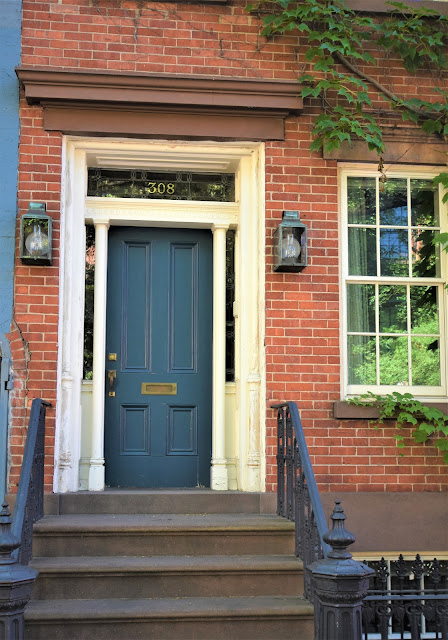 The Italianate ironwork and the metal cornices over the entrance and windows were added around 1868.
Around 1868 the house became a private residence.  Garrett J. Westervelt was listed in directories as "merchant."  His location in the Washington Market meant that he was either in the produce or butcher business.  It was almost assuredly Westervelt and his wife, Annie, who gently updated the house with Italianate ironwork and sheet metal cornices above the entrance and windows.
The Westervelts had two sons, Frank and James.  Sadly, Frank died at the age of seven on July 16, 1872.  The little boy's funeral was held in the parlor two evenings later.
The Westervelts remained in the West 11th Street house for more than three decades.  James D. Westervelt sold it to James F. Carroll on March 29, 1906.   Carroll's wife was the former Mary E. Hart.  The year the Carrolls moved in, James was appointed a Commissioner of Deeds, a civic post similar to a notary public today.
The couple rented a room to John P. Fitzgerald.  When the United States entered World War I, Fitzgerald joined the military.  Tragically, he would not return.  He was wounded in battle and evacuated to a field hospital, but then on November 9, 1919 the War Department listed him on the list of "Died of Wounds."
Like the Westervelts, the Carrolls lived at 308 West 11th Street for decades.  James died here on February 20, 1920.  His funeral was held in the house on February 23, followed by a requiem mass at St. Veronica's Church on Christopher Street.
Mary Carroll sold the house in May 1922.  Rather astoundingly, it was never converted to apartments.  Following its sale in 1987 for $800,000 (about $1.8 million today), the interiors were renovated.  Essentially none of the 1842 elements now remain. 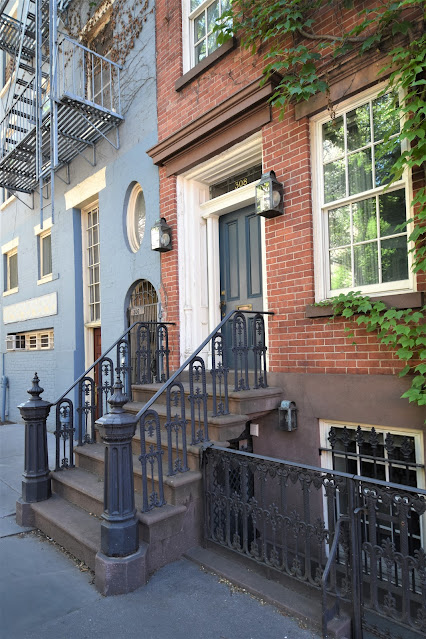 The exterior, however, is beautifully preserved since the Westervelts made their minor updates around 1868.
photographs by the author
LaptrinhX.com has no authorization to reuse the content of this blog
Posted by Tom Miller at 1:13 AM