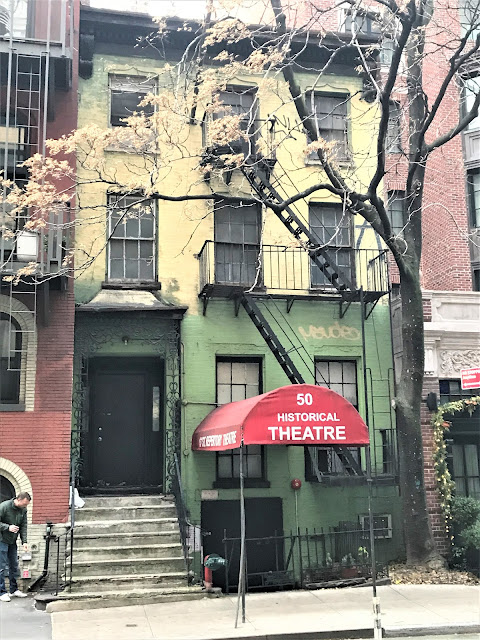 In 1846 construction began on the 21-foot-wide brick house at 50 West 13th Street.  Completed the following year, the three-story Italianate house featured architectural extras that sat it apart.  Rather than molded or flat lintels, for example, these were carved with graceful ogival arches.  But most eye-catching was the lacy cast iron porch with its handsome sloping hood.  A three-story brick stable stood in the rear yard.
Slavery had been abolished in New York in 1827.  The first enclave of freed Blacks in New York cropped up in Greenwich Village, centered around the bent Minetta Street (earning it the nickname Little Africa in the 1860's).  Many of the Little Africa residents lived in poverty, but that was not the case with Jacob Day.
In her 1912 book A Narrative of The Negro, Mrs. Leila Amos Pendelton wrote that as early as 1836, "Some of the educated and cultured colored men of New York were...James Williams and Jacob Day."  And in his 1882 History of the Negro Race in America from 1819 to 1880, historian George W. Williams noted, "The Colored population of New York was equal to the great emergency that required them to put forth their personal exertions...James Williams and Jacob Day among business men, did much to elevate the Negro in self-respect and self-support."
Day was listed in directories as a "private caterer." His  successful business garnered him enough money to purchased 50 West 13th Street in 1858.  He ran his operation from the basement level.

The University Quarterly, July 1882 (copyright expired)
The Day family occasionally took in Black boarders.  In 1867 Dr. Henry Lassing lived with here, and from 1869 through 1874 Sarah J. S. Thompkins boarded with the Days.  A widow, she taught in the Boys' Department of Colored School No. 4 on West 17th Street.
And in 1876 and '77 Theodore Gogean was listed at 50 West 13th Street.  A waiter by profession, he most likely worked for Jacob Day. 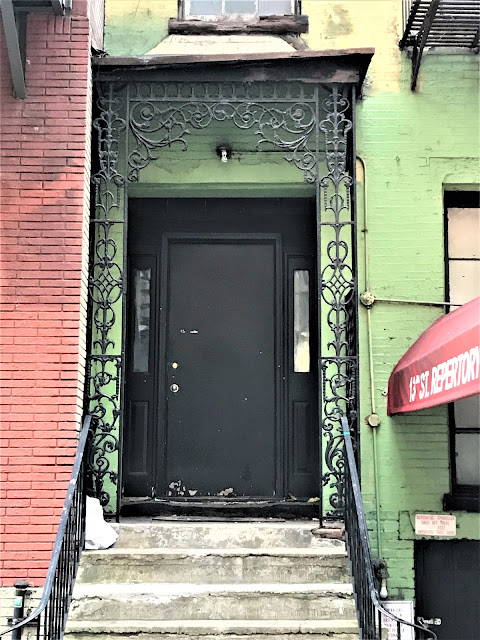 Day's prominence in the Black community went far beyond his professional success.  He was the "trusted and longstanding" treasurer of the Abyssinian Baptist Church on Waverly Place, for instance.  The congregation was formed in 1808 by a group of Blacks who refused to capitulate to the segregated seating of the First Baptist Church of New York City. The congregation of the Abyssinian Baptist Church, in their Sunday finest, poses in front of the Waverly Street Church in 1907, before moving uptown.  from the collection of the Library of Congress
Most importantly, Day used his financial and social position to lobby for improvement.  The People's Advocate called him one of the "colored aristocracy" of New York in 1880.  He was a staunch advocate of abolition, a campaigner for civil rights, and a promoter of Black-owned businesses and institutions.
Day apparently worked vigorously to help escaped slaves fleeing north before the Civil War.  The Abyssinian Church was linked by the National Anti-Slavery Standard to Underground Railroad supporters, one of whom almost assuredly was Day.
The end of the Civil War did not end Day's fight.  On September 19, 1866 the National Anti-Slavery Standard began an article saying, "The war of steel is over, so it is declared, but the war of ideas must go on until in this country true democratic principles shall prevail."  The article noted that injustices continued.  "A large proportion of us are (on account of that unjust discrimination) shut out from our right to vote, as citizens of the United States, and of the State of their birth and adoption."  A State Central Committee "composed of representative men, who may act for the people during the ensuring year--a year likely to be one of the most important in our history" had been chosen to attend the State Convention in Albany on October 16, 1866.  Among them was Jacob Day.
Jacob Day died in 1884 and his sons, Charles and Jacob, Jr. took over the business, moving it slightly down the street to 38 West 13th Street in 1888.  The Brooklyn Daily Eagle described the operation, saying "Their specialty is management of weddings, dinners, receptions, card parties, musicales, etc."
The family leased 50 West 13th Street to James Mason and his wife.  The couple was no doubt intimately acquainted with the Days.  The New York Times noted, "Though occupying for years the humble position of a porter in the employ of the elevated [rail]road, Mr. Mason exerted great influence for good among the colored people of the city, working for their betterment through the instrumentality of the many benevolent societies to which he belonged."
Mason's wife had been an active member of the Bethel African Methodist Episcopal Church for years.   When he became seriously ill in November 1890, she convinced him to join the church.  Her concerns were well-founded.
Mason had contracted "congestion of the lungs," according to The New York Times.  It developed into pleuro-pneumonia and he died in the West 13th Street house on December 13 at the age of 49.  Five days later The New York Times reported:

Probably no colored man was ever buried in this city with the imposing ceremonies that accompanied the obsequies of James Mason yesterday...The funeral ceremonies began on Tuesday afternoon at 5 o'clock, when the body was transferred to Bethel Church and placed in a catafalque in front of the pulpit.  It lay in state until 8 o'clock, and thousands of the colored population passed by the bier to pay their last farewell to the dead.  When the services began every seat and all the aisles of the church were filled, the body of the sacred edifice being reserved for the Masonic and other societies, which came in full regalia.

In 1896 Jacob Day's heirs sold 50 West 13th Street to Mary E. Lawson for $2,000--around $63,600 in today's money.  Living in the house at the turn of the century was Richard Burnett.  The 30-year-old clergyman ended up in Bellevue Hospital on May 6, 1900 after a bizarre incident.
The New York Herald reported that Burnett, "a colored Baptist minister, is in the insane pavilion at Belleview Hospital, being watched by insanity experts."  Police had noticed him "talking incoherently and waving a Bible."  Dr. Ford was called to transport him to the hospital.  During the ride, according to the newspaper, Burnett "wanted to convert the driver of the ambulance."  Dr. Ford then made another stop at the Mercer Street police station to pick up "an Italian lunatic, Annid Bertini, a laborer...who is violently insane."  Richard Burnett tried his best to preach to him, "but soon gave it up."
When the ambulance reached Bellevue Hospital, the young clergyman attempted to mount the horse, much to the annoyance of the driver.  He was pulled off and taken inside.  The New York Herald recounted, "He said he was used to horses and had ridden the most fractious mules in Virginia."  It added, "He was allowed to keep his Bible."
For at least eight years, between 1902 and 1910, architect John Davidson lived and worked in the house.  In 1941 the basement and parlor levels were renovated for the Design Technics School.  The top two floors remained a one-family residence.
On September 22 the school opened, offering "courses for teachers in metals, jewelry, ceramics, sculpture and weaving and special courses in industrial design and in experimental technics," as reported by The New York Sun. 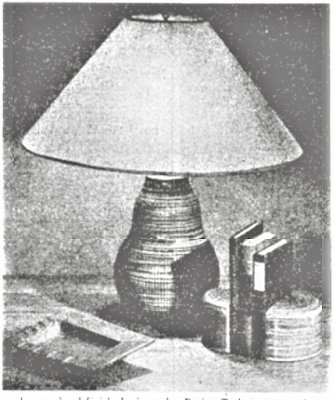 This hand-thrown lamp with a spun glass shade was made at Design Technics School.  The New York Times, November 5, 1946.
On November 5, 1946, The New York Times wrote, "The studio is unique in New York since the craftsmen mix their own clay, make their own molds, grind glazes and perform all the other steps necessary to turn out accessories in numbers.  The start-to-finish production is accomplished in an 100-year-old building."
In 1959 the house was renovated again.  There was now an auditorium and theater in the basement, and a "clubroom school" on the parlor floor.  Given the history of the address, it seems appropriate that on January 18, 1968, The Village reported, "The Afro-American Folkloric Troupe, four young Negroes performing poetry, prose and folklore, are appearing every Sunday at 8:30 p.m. at 50 West 13th Street."
In 1972 the auditorium space became home to the Off-Off Broadway 13th Street Repertory Company.  In January 1974 Israel Horovitz's one-act play Line opened and 31 years later in 2015 was still playing a few nights a week.
Headed by Edith O'Hara (who lived in the upper portion of the house), the theater's stage saw the work of prominent actors, directors, playwrights, and designers over the decades.  The arcane venue, tucked away in the basement of the venerable, if now beleaguered house, perhaps seemed (like its leader) destined to be around forever.
But in the fall of 2020 Edith O'Hara died at the age of 103.  Her three children own just over a third of the property, the rest held by Stephan Loewentheil and his former wife, Beth Farber.  An agreement signed in 2010 allowed the theater to remain until Edith O'Hara's death.  No one seems to know what will now happen to the historically significant structure.  That is especially true since the Landmarks Preservation Commission has initially dismissed the Jacob Day house for landmark designation, citing insufficient architectural merit. 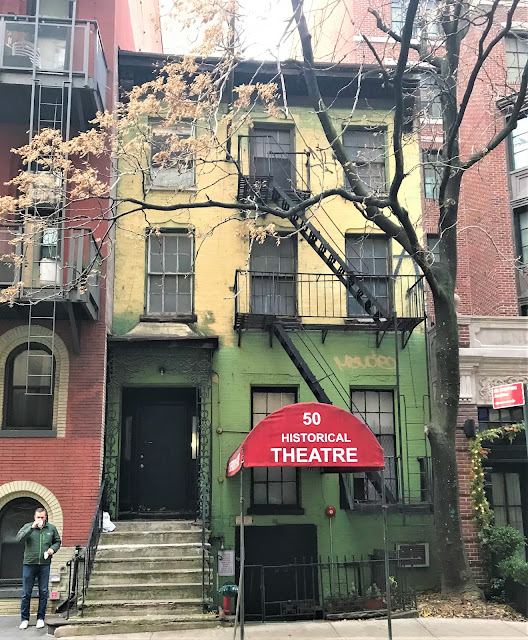 In the meantime, the etiolated charm of the quaint 1847 house pales to its significance in New York's Black history--one that should certainly count towards its merit as a city landmark.
photographs by the author
no permission to reuse the content of this blog has been granted to LaptrinhX.com
Posted by Tom Miller at 1:11 AM