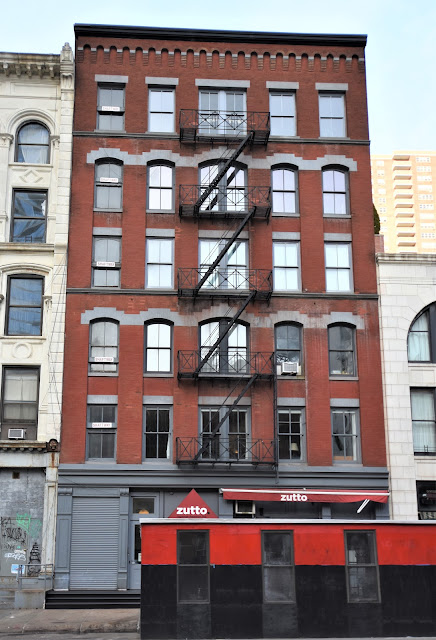 Charles Welsh was a jeweler, but he augmented his income through real estate development--much of it in the rapidly transforming district known today as Tribeca.  In 1885 he purchased the building at 77 Hudson Street.  Eight years later, on February 16, 1893 William D. Tweddle purchased the three-story brick store next door at 79 Hudson Street from Edgar Schieffelin.  Now the two joined forces to erect a modern warehouse on the site.
Welsh had previously worked with architect Martin V. B. Ferdon on three Tribeca projects.  In 1894 he and Tweedle hired him to design their warehouse at 77 and 79 Hudson Street.  The six-story structure was completed the following year.  Above the cast iron storefront, Ferdon's tripartite design included two identical sections at the second and third, and fourth and fifth floors.  Shallow, two-story piers between the openings rose to  continuous stair-stepped lintels.  Prim, molded intermediate cornices defined the sections.  Above the understated sixth floor, a Romanesque style corbel table took the place of a showier cornice.
The neighborhood was by now the center of what was known as the butter and egg district.  Among the initial occupants of 77-79 Hudson Street were Hayn & Day, commission merchants in butter, cheese and eggs; and the A. F. Stone Company, which, according to The New York Times in 1896, "deals in druggists' and grocers' specialties."
One tenant not involved in dairy products was Seville Packaging Co., here by 1897.  The company imported and packaged products from France, Spain and Morocco.

Seville Packaging Co. promoted its olive-based relish, Pim-Olas.  The Illustrated American, 1897 (copyright expired)
The firm dealt in products like olives and olive-related products, such as relishes and olive oil, under the brand name Pim-Olas.  Later, in the 20th century, the brand name Goya would become the firm's main label.
In 1899 the building was renovated for the Harrison Street Cold Storage Company, which also had facilities at 3 through 11 Harrison Street and 12 Harrison Street.  The firm sublet space to butter, eggs and cheese tenants like Pitt, Barnum & Co., and Horneman-May Co.
The Merchants' Refrigerating Company took over the lease in 1919.  It, too, had additional locations.  Established in May 1894, it remained in the building until the 1931, when George W. Welsh leased it to the George F. Wagner Company. 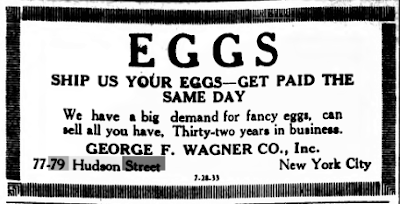 The Commercial Advertiser, July 1937
The wholesale egg, butter and cheese firm was founded in 1905 by George F. Wagner and by now his two sons, Robert and Stanley, were involved in the business.  The firm remained in the building until its merger with the June Dairy Products Co. in March 1950.  That same year the Welsh family sold the property. 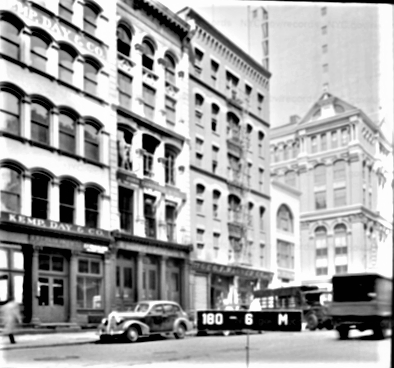 A full width sign above the storefront announces Geo. F. Wagner Co. around 1941.  via NYC Dept of Records & Information Services
The building became home to the Atalanta Trade Corp., a member of the Cheese Importers Association of America, Inc.  The firm would remain for decades. 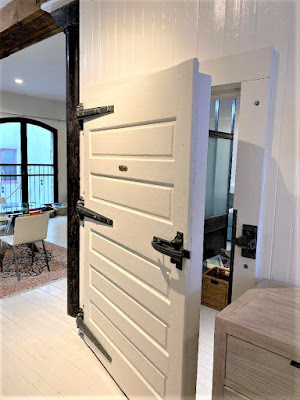 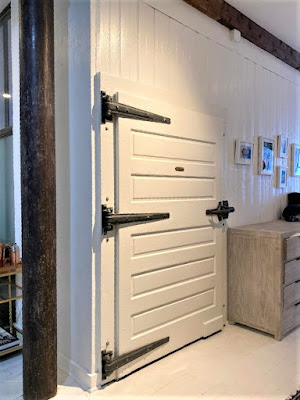 Vintage refrigeration doors survive within some of the residential lofts.  photo by Joyce Wu
But the third quarter of the 20th century saw tremendous change overtake Tribeca.  One-by-one its lofts were renovated to upscale residential space, while the storefronts became home to trendy shops, galleries and restaurants.  In 1997 a renovation to 77-79 Hudson Street resulted in one residential loft per floor above a restaurant.  Externally, not much has changed to the vintage structure since the days when crates of olive relish and the aromas of cheese filled the floors. 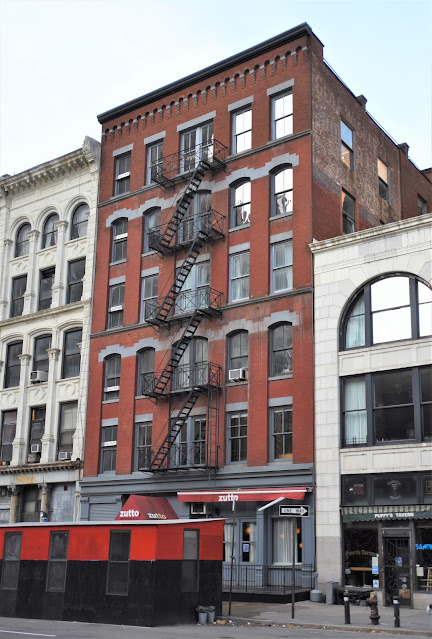 photographs by the author
many thanks to reader Joyce Wu for requesting this post
no permission to reuse the content of this blog has been granted to LaptrinhX.com
Posted by Tom Miller at 1:14 AM