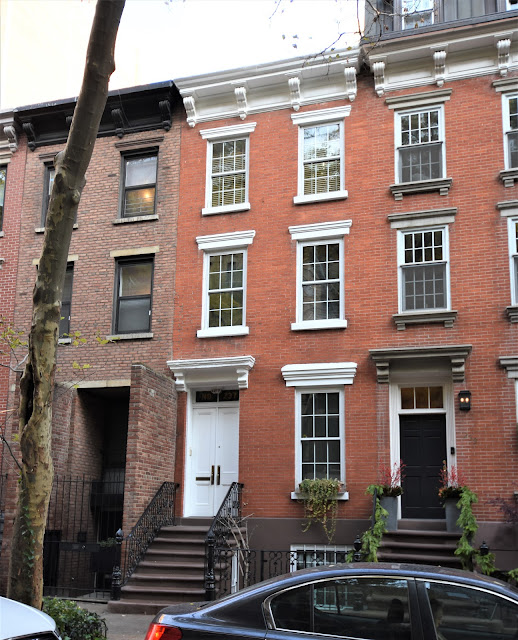 East 78th Street was opened in 1861, the year that war broke out in the South.  With much of New York City's working class off fighting, construction in Manhattan ground to a near halt.  Then, shortly after peace was declared in 1865, construction started on a row of brick-faced homes on East 78th Street between Second and Third Avenues.   Although three stories tall over a brownstone-clad basement, their mere 13-foot width reflected the intended economic class of the potential owners.  Yorkville was greatly populated by working class immigrants--Irish and German mostly--many of them hired to build the Croton Aqueduct.
Among the row was 237 East 78th Street, which, like its neighbors, displayed elements of the Italianate style--like the bracketed cornice and full-height third floor.  It became home to Charles Wels by 1867, a music teacher and the organist of Christ Church downtown on Fifth Avenue at 39th Street.
Wels was born in Prague (then Austria) in 1825.  He had begun composing at the age of 11, and at 19 studied under the renowned composer and teacher Vaclav Tomasek.  While a young man he had impressed Franz Lizst and Richard Wagner. 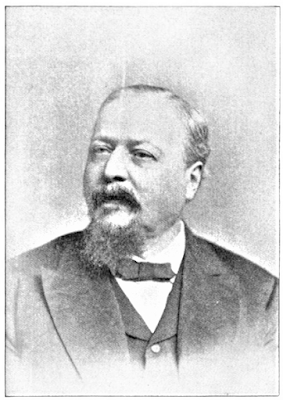 Charles Wels, from A Hundred Years of Music in America, 1900 (copyright expired)
He came to America in 1849.  His many compositions were well received, and led to his being commissioned to write the funeral march for Abraham Lincoln's cortege.  A Hundred years of Music in America would later describe Wels as "well and favorably known among American musicians."
In 1872 the Jacobi family moved into the narrow house.  Samuel and his son Max Jacobi operated a "segar" business at 257 Pearl Street.  The family was active in Jewish affairs.  Samuel was a member of Metropolitan Lodge, No. 213, Independent Order of B'nai Brith, and his wife, Mina, was a member of the Hebrew Ladies' Benevolent Society of Yorkville.
Mina died on March 12, 1875 at 57 years of age.  Because it was a Friday, her funeral in the parlor of 237 East 78th Street was not held until Sunday morning, March 14.
Builder John Murphy and his family moved into the house about three years later.  He and his wife, Anastasia, had a daughter Mary, who became a school teacher.
In 1890 Mary was teaching in the Primary Department of Grammar School 59 at 228 East 57th Street.   The location of the East 78th Street house made her commute easier.  Two elevated train lines, the Third Avenue and the Second Avenue Line had been opened in 1878 and 1879 respectively.
In 1890 the Murphys took in a boarder, Alice V. Parle.  She may well have known Mary Murphy beforehand, since she was a teacher in the Girl's Department of Grammar School No. 18 at 121 East 51st Street.
After living in the house for nearly two decades, the Murphys sold 237 East 78th Street on August 27, 1895 to Nathan and Alice Mayer for $8,500.  The price would equal about $270,000 today.
The Mayers got into financial trouble nine years later.  On January 1, 1904, after they defaulted on the mortgage, Mary Emerich foreclosed.  She took possession of the title in April, and sold it on September 1 to Magdalena Crocoll. 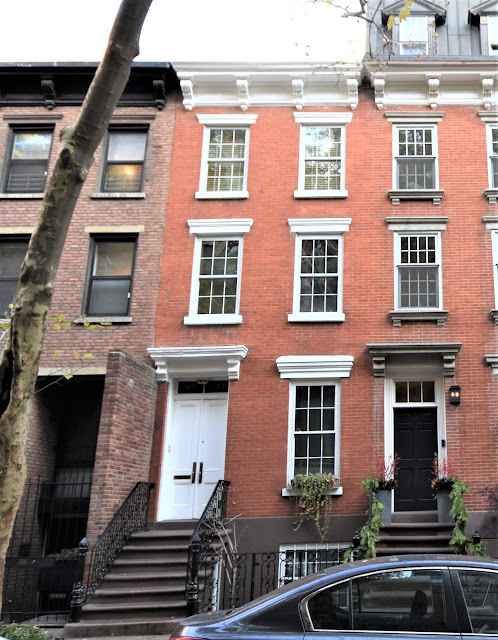 It appears Magdalena took in boarders for the next few years.   A family lived here in 1906, whose precocious son was looking for a job.  His advertisement, signed only with his initials, read:

Jerome Schwartz lived here in 1907.  His amorous flirtatious landed him in jail on May 2 that year.  The diminutive Schwartz, "who says he is a native of Puerto Rico," according to The Evening Telegram, was down the block at 78th Street and Third Avenue when he got an enormous surprise.
Also on the corner was plain clothes Police Inspector Dillon.  He told the court, "he saw the prisoner, a dapper little man, sidle up to several women and peer into their faces in an annoying manner."  Dillon walked up and grabbed Schwartz by the collar.  Because he was not in uniform, Schwartz had no way of realizing Dillon was a policeman.  He swung the suitcase he was carrying against Dillon's face.
The Evening Telegram reported, "Dillon picked up his prisoner as a small boy and tucked him under his arm, in which manner he was conveyed to the East Sixty-seventh street station and locked up."  Called a "masher" by the newspaper, Schwartz was released the following day after paying a $10 fine for "annoying women."
Boarding here by 1916 was Emil Picht, a tailor.  He had come to America in 1911 from Berlin, German where he had operated a ladies' tailor shop.  He had also served in the German army for seven years with the rank of lieutenant.
Picht was still renting a room at 237 East 78th Street two years later.  As it turns out, his ladies' tailoring shop worked well for his other passion--cross dressing.  On Saturday night, July 27, 1918 Picht left the house in full drag.  It was a risky thing to do, since transvestitism was illegal and, to make matters worse, anti-German sentiments following World War I were high.
Unfortunately for the 42-year-old, he was spotted at Madison Avenue and 86th Street and arrested.  The Sun rather derisively noted that he "was a good looking 'woman' when he was picked up."  The newspaper said he "insisted that he dolled up to entrap a man who had insulted his sweetheart."  Officers came to the East 78th Street house and searched his room, where they found "a large assortment of women's wearing apparel."
After sitting in jail for two days, Picht appeared before Magistrate Sims on Tuesday, July 30.  He stuck to his improbable alibi.  It did not turn out well for the immigrant tailor.  The judge turned him over to the Department of Justice "for interment as an alien."
The Yorkville neighborhood was heavily German by now and over the decades 237 East 78th Street would see a succession of German surnames.  In 1920, for instance, Elizabeth Spannhake sold the property to Edward A. Bielefeld.
It was still being operated as a rooming house.  In 1936 actor Thurman Jackson was on the Federal Government's list of voters for the Communist Party.  He would remain in the house at least through 1940.
In the summer of 1936, Jackson had the role of Captain Sam Rogers in the Work Progress Administration's play Turpentine at the Lafayette Theatre.  It was possibly the stress of the Great Depression and the financial hardships that actors and artists were undergoing that took its toll on him.
During the performance on the evening of August 20, Jackson collapsed.  He was taken to Harlem Hospital "seriously ill," according to The New York Age.  There Dr. Hackett said he "was suffering from a severe neurotic condition brought on by extreme taxation of the nervous system." 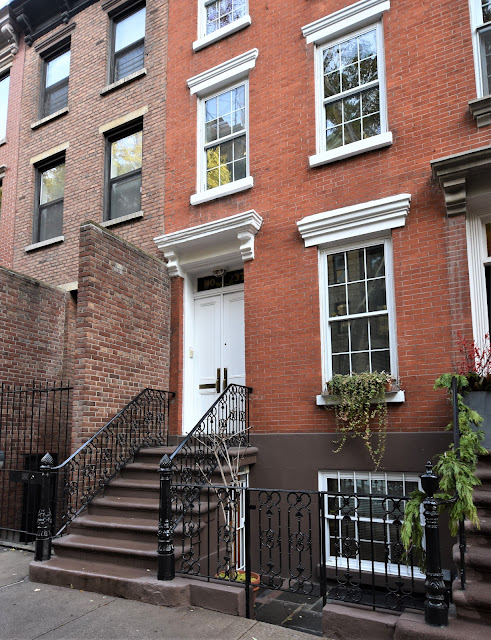 Most likely because of its narrow proportions, the house was never divided into apartments, and continues as a single-family residence today.
photographs by the author
no permission to reuse the content of this blog has been granted to LaptrinhX.com
Posted by Tom Miller at 1:11 AM