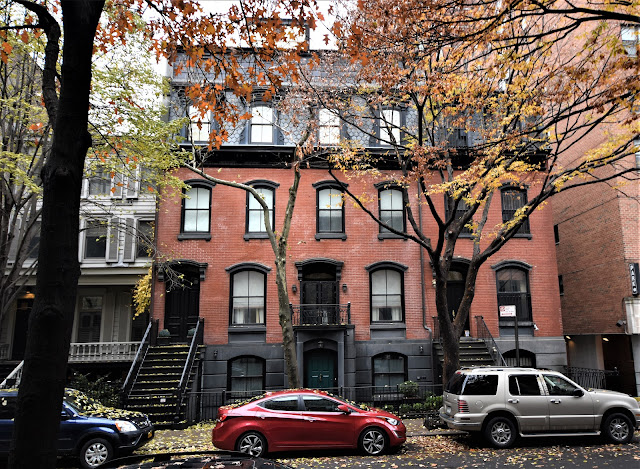 Around 1871 the row of four prim brick-faced homes were completed at 404 through 410 East 85th Street.  Each just 16-feet-wide, they were intended for middle-class families.  The Second Empire details--the elliptically arched cornices above the entrances, the molded window lintels, and the slate-shingled mansard levels--were possibly drawn from style books of the day.
Thomas J. Gillis, a builder and contractor lived at 404 East 85th Street, while the first occupant of 406 East 85th Street was John N. Wright, a clerk.  He remained until 1879 when it became home to Frances Bowne, the widow of Harvey H. Bowne, and her son, Alfred.  Alfred died in the house on April 13, 1882.
Next door at 408 was the family of Charles E. Hunter, who listed himself as a shoe merchant in 1871, but changed careers to "collector" (most likely of taxes) in 1873.  The Rev. Stephen D. Brown lived at 410 East 85th Street in the first years of the 1870's.   The minister of the 86th Street Methodist Church, Brown was among the earliest members of The Missionary Society of the Methodist Episcopal Church, founded in 1855.
In 1892 Thomas J. Gillis purchased 406 and 408 as investment properties.  He advertised the 10-room houses that year as being in "first class order."  The monthly rent of $50 he asked would equal about $1,500 today. 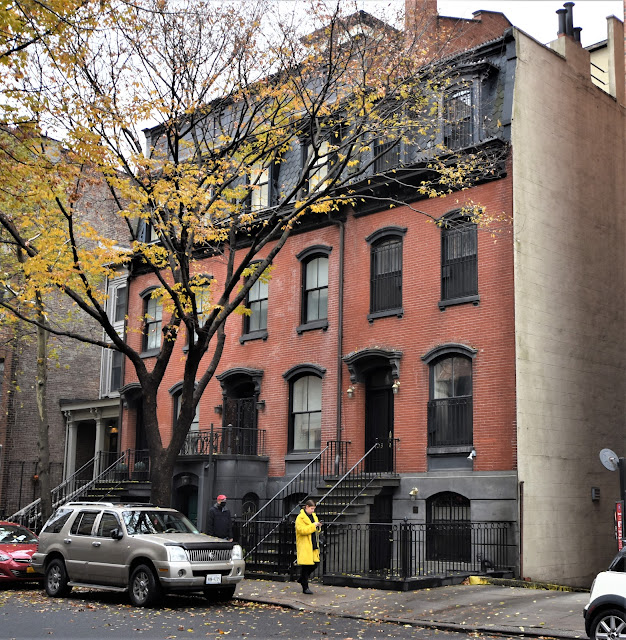 Eugene Reiss, his wife Natalie, and their 18-year-old son moved into 408.  Not long afterward a friend gave them a present: a large Newfoundland dog.  It proved to be somewhat of a problem as, according to The Sun, the son "was the only member of the family who seemed able to control the big dog."
At around 8:00 on the night of July 26, 1892, Eugene Reiss was concerned that the dog, who was in the basement, might be suffering from the heat.  He went down the stairs to take it to the rear yard.  The Sun reported, "The dog sprang at him as he entered the basement and fastened its teeth in his left forearm.  Reiss tried to force the dog to release its hold with his right arm.  It let go only to take a fresh hold in a new place."
Natalie, hearing the commotion, rushed downstairs.  The dog now turned on her, biting her twice in the right hand.  Reiss grabbed the dog around the throat, held it while Natalie escaped up the stairs, then backed out into the yard.  "He gave the brute a kick and threw it from him when near the back hall door of the house, and rushed through the doorway, slamming the door behind them."

When the Reiss's son came home, he "calmly went out and collared the unresisting animal, dragged it into the basement, and chained it," said the article.  But the Reisses were badly injured.  They went to a nearby druggist, who sent them to Dr. Irving Haynes.  He dressed and sewed up Eugene's injuries and cauterized Natalie's wounds.
In the meantime, the druggist, assuming the dog was mad, sent word to the 88th Street station "for a policeman to shoot the brute."  But when Officer Moore arrived, the Reisses said they did not want it killed.  For one thing, they reasoned, it was valuable.  They also did not think it was mad, "and because if he was shot they might never be able to find out whether he was mad or not," said The Sun.  And so the Reiss family and their dog continued their tense coexistence.
In 1887 Ferdinand A. Sieghardt purchased 410 East 95th Street, paying the equivalent of $251,000 in today's money.   Following the death of Thomas Gillis, 406 and 408 were sold at auction on June 23, 1896.  The buyer of 408, Sebastian A. Sieghardt, was almost assuredly a relative of Ferdinand Sieghardt.  He paid $6,400 for the house.  Sebastian Lauterbach and his wife, the former Mary Schneider, paid slightly more, $6,475 for 406 (about $206,000 today).
It appears that Sebastian Sieghardt leased rooms to a young couple, Daniel and Nellie Wall.  They had a baby girl, Henrietta, in November 1895.  Tragically, she died just ten months later on August 1, 1896.  Her funeral was held in the parlor three days later.
Following the Walls, Seighardt's boarder was Robert Burger.  He found himself in hot water on Sunday afternoon, July 11, 1898.  He and two friends, James Murphy and Joseph Hyer, were riding a triplet--a three-seat bicycle--and bicycle Policeman Casey tried to stop them for "scorching," or riding too fast. 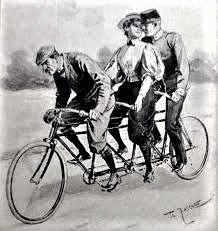 Robert Burger and his friends were riding on a vehicle similar to this one.
The young men decided that the pedaling of three men could outrun that of one, and took off.  The Sun reported, "The chase began at Fifth avenue and Ninety-fifth street.  At Ninety-seventh street [Casey] had Hyer, the hindmost cyclist, by the slack of his shirt."  They were taken to the East 104th Street station where Casey "covered himself with glory and covered with shame three young men."  Burger and his cohorts left their vehicle as bail, "and went away, each angrily accusing the others of having suggested that they could run away from the policeman."
Sebastian Lauterbach died on October 15, 1902.  Somewhat surprisingly, the title to 406 East 85th Street was in his name rather than Mary's, as might have been expected at the time.  Nevertheless, on October 25, the Real Estate Record & Guide reported that the heirs of Sebastian Lauterbach had transferred title to Mary.  She continued living in the house.   Even middle-class households had at least one servant, and in 1903 Mary placed an add for a "girl to do general housework, good city references." 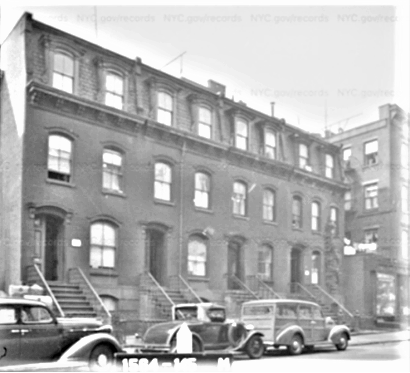 All four houses were still standing in 1941.  via the NYC Dept of Records & Information Services
Mrs. Caroline Foster lived and operated her doctor's office at 408 East 85th Street in 1904.  The trouble was that she did not have a medical license.  The State Medical Association filed charges against her that year.  She and four others were prosecuted on October 18 for "practising [sic] as physicians without proper registration."
The former Gillis house at 404 East 85th Street was demolished in 1961.  Ten years earlier 406 had been converted to apartments and furnished rooms, and in 1969 a restaurant, Casa Brasil, occupied its basement level.  It was returned to a single family home in 1984. 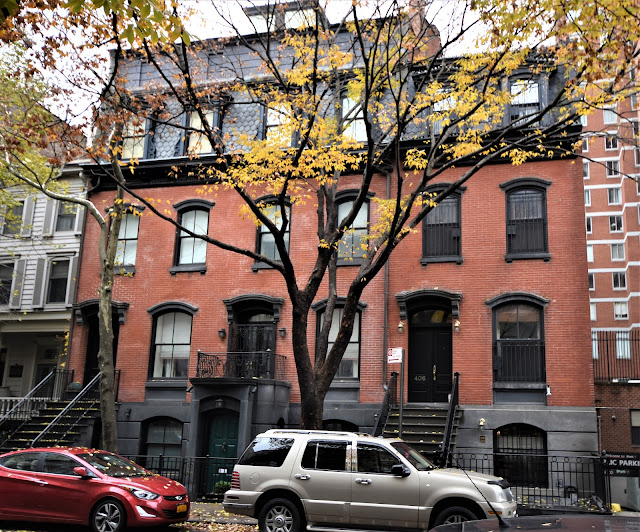 In 2001, 408 and 410 were combined into a single residence.  An additional level was added to the roof, and the stoop of 408 was removed for accommodate the new entrance at the basement level.  Through it all, the three surviving houses have retained their mid-19th century charm.
photographs by the author
no permission to reuse the content of this blog has been granted to LaptrinhX.com
Posted by Tom Miller at 1:14 AM