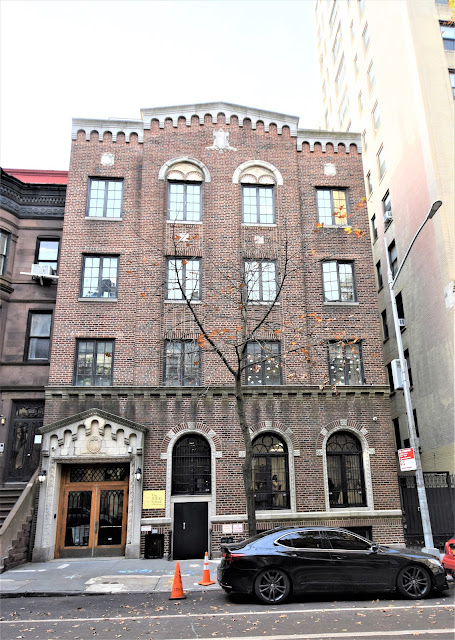 Born on December 13, 1856 Charles had married Mary Holly Bailey on October 12, 1880.  The couple had three children, 8-year old Charles Ferguson, 7-year old Fannie, and Bailey, who was born in the new house on May 2, 1893.
Brower had been a member of Ye Olde Settlers' Association of Ye West Side since 1884, a social club for area residents.  He was also highly involved in the West End Association, a more activist group, staunchly defensive of the developing suburb which lobbied for improvements like sewers and mass transportation, and against "nuisances" like the city's proposal to use land below Riverside Drive for incinerating garbage.  He was, as well, a director and treasurer of the Ocean Trading Co., and a trustee of the Metropolitan Museum of Art.
The Brower country home was in Quogue, Long Island.  There Charles berthed his yacht, the Frontenac.  The craft was annually entered in the Westhampton Country Club regatta.   And by the time the younger Charles reached his 18th birthday, he too had a boat.  Father and son did very well in the regatta of 1902.   On August 10 the Brooklyn Daily Eagle reported "In class Q. sloop Frontenac, Charles Dehart Brower, was an easy winner, beating Winnabust over nine minutes, with Wampnissie third.  In class U. sloops, Lass, Charles Dehart Brower, jr., finished first and Atmaq, second."
In 1901 the West End Association began fighting with the Forty-second Street, Manhattanville & St. Nicholas Avenue Railway Company "against the maintenance of four tracks in Amsterdam Avenue, on the ground that the unused tracks are a nuisance as well as a menace to the public," as reported by The New York Times.  When nothing happened after five years, Charles DeHart Brower took the matter in to his own hands, suing the firm and seeking the forfeiture of its charter.
The younger Charles had graduated from Princeton in 1904 with a degree in electrical engineering.  The family was spending the holidays in Quogue in 1907 while Marian Childs was visiting the William E. Barnes family nearby.  The Sun mentioned that both Charles and Marian "are well known in New York society."
It appears that the two were well-known to themselves as well, for on New Year's Eve Charles proposed that they elope.  The Sun explained it saying he "asked Miss Child's why they couldn't get married then and dispense with the marriage license and a lot of bother and fuss."  Within hours the two were married.  The article said "They and a few relatives got into Mr. Brower's automobile and the trip to Riverhead was made in a hurry."
Fanny's marriage to Harvey C. McClintock on November 11, 1911 was a more traditional affair.  It took place in the Quogue residence with the expected announcement, invitations, and guests.  The newlyweds moved into the West 91st Street house.
In the meantime, Mary Brower was involved in Upper West Side causes.  She was an officer in the Bloomingdale Day Nursery and a member of the Ladies' Association of the Sheltering Arms.  The Sheltering Arms was an institution founded to care for children six to twelve years old "for whom no other institution provides."  The children were not orphans, but placed there by parents or guardians who could not afford to care for them.
Around 1917 Charles Brower fell ill.  His condition worsened over a period of months and he died in the house on May 2, 1918 at the age of 62.
Two years later the Browers offered the residence for sale at $65,000--just under $830,000 in today's money.  The Real Estate Record & Builders' Guide reported that it sold for a startlingly higher amount, $85,000 and that "after extensive alterations will be occupied by the purchaser."
That purchaser was motion picture producer William Fox, founder in 1915 of the Fox Film Corporation.  He was also a director in the Motion Picture Producers and Distributors of America.  Born in Hungary as Vilmos Fuchs, his parents brought him to the United States when he was nine-months old.   His name is best remembered today in 20th Century Fox, Fox Broadcasting and similar firms.
Possibly because the motion picture industry was rapidly moving west to California, Fox's residency in the house was short lived.  In 1923 it was purchased by the Rutgers Club which hired architect Samuel Sass to do interior renovations.  Five years later the architectural firm of Gronenberg & Leuchtag completely remodeled the building, giving it a new neo-Romanesque facade.  Stone medieval-inspired corbels over the entrance and below the cornice, and inset heraldic shields provided contrast to the brown-red brick.  The center shield below the gable holds the club's monogram, RC. 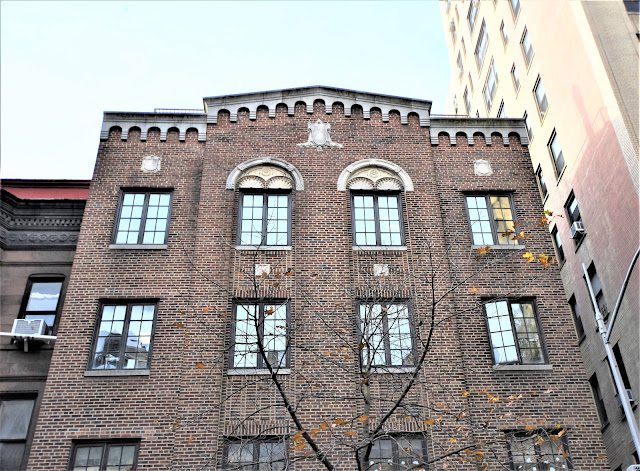 From the beginning the Rutgers Club was used by Jewish groups, most notably Ivriah, a women's group which ran a Jewish education center in the building.  On February 15, 1923 the New York Post reported "One of the most unique collections of dolls in the world--representing dolls of twenty-five countries stretching from the inner-most sections of the Orient to the nations of Eastern and Central Europe--will be displayed by...the West Side Division of Ivriah at the Rutgers Club, 314 West Ninety-first Street."
And on April 22, 1934 the Jewish Telegraphic Agency reported on Ivriah's upcoming weekly meeting.  Leo Schwartz was to discuss "Jewish Problems and their solution" and Selma Start would speak on "Creative Listening to Music."
International Jewish issues continued to be addressed in lectures and meetings here.  On November 4, 1937 The New York Sun reported "A symposium on the proposed establishment of a Jewish State in Palestine has been arranged by the West Side Zionist District for next Monday evening at the Rutgers Club." 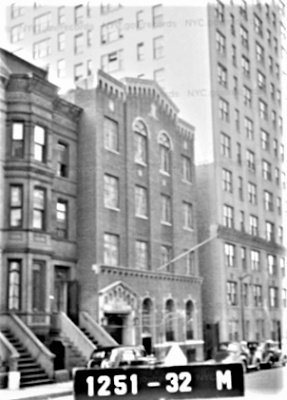 Little has changed to the exterior of the building since this photograph was shot around 1941.  via the NYC Dept of Records & Information Services
On August 2, 1943 The New York Sun announced that the Herzliah Hebrew Academy had purchased the building.  The article noted "the purchaser plans to extensively alter the building and occupy it for education purposes with a curriculum similar to that of a junior college."  The renovations, completed in 1944, resulted in an auditorium on the first floor, class rooms in the second and third, and offices on the top floor.
The Herzliah Hebrew Academy remained for more than two decades.  By the early 1970's the building had become the Walden School, a private school for grades 8 through 12, and in 1974 was home to the Center for Change, "a revolutionary health care and educational service organization," according to WorkForce magazine.
In 2005 The Ideal School of Manhattan was founded and moved into No. 314 West 91st Street.  The independent elementary school remains in the space.  And despite its many incarnations, the exterior is little changed since the Rutgers Club gave it a facelift in 1928.
photographs by the author
Posted by Tom Miller at 1:09 AM