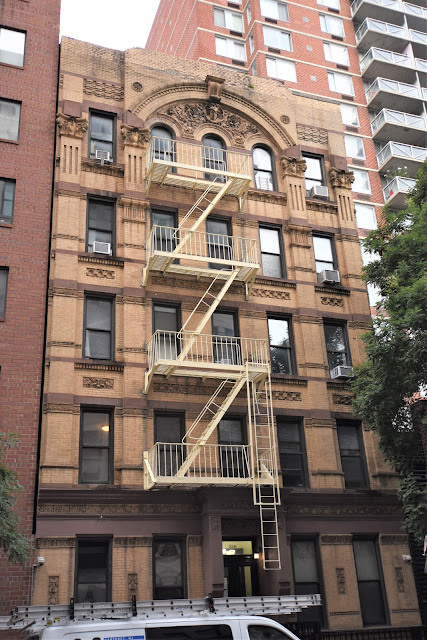 On August 1, 1889 William C. Burne purchased the two two-story wooden houses at Nos. 258 and 260 West 17th Street from Newman Cowen, paying $18,000 for both properties.  He had big plans for the site.  His architect, John C. Burne (possibly a relative) filed plans for a five story "brick flat" to cost $37,500.  The total expense of the project including property would equal $1.58 million today.

Burne produced an exuberant blend of materials and styles.  Clad in yellow brick, it was lavishly ornamented with brownstone and terra cotta.  The architect's recipe of Queen Anne, Renaissance Revival and Romanesque Revival styles resulted in a striking architectural concoction.

Creative brickwork appeared in the faux fluting of the upper piers and remarkable stepped corbels below the cornice (now sadly lost).  But terra cotta stole the show in foliate bands and panels, chain motifs, Corinthian capitals and the sumptuous spandrel of the top floor arch.   Here a central portrait of Mercury was flanked by roses, cornucopia and swirling vines.

Although its tenants were respectably middle-class, the building quickly appeared in news articles for less than favorable reasons.  It started with one of the original residents, 34-year old William H. Buttner, a lawyer.

Buttner moved into No. 260 in August 1890, just after its completion.  He opened his law office at No. 322 Broadway with partner William D. Hughes in January 14, 1888.  The firm specialized in divorce cases.  The Press noted "They advertised extensively that they were able to secure 'divorces without publicity,' and were soon overrun with clients."  The partnership fell apart before the year was out.

Buttner was at Koster & Bial's music hall on Christmas Eve 1890 "in a full dress suit" when officers arrested him.  He spent Christmas in jail, thus attired, and appeared in the Jefferson Market Police Court on December 26.  Also there was his former partner, William D. Hughes, who testified against him in damning detail.  The scandalous story was covered across the country.

The Fort Worth Daily Gazette reported on December 27 that "William H. Buttner, manufacturer of bogus divorces, has been entangled by the statements of his former partner."  Hughes told the court about taking money from clients who never received a divorce.  The Press added "The pair did not devote all their time to divorce cases, but also presented civil suits and by deceit and forgery robbed their poor clients."

Buttner was so enraged by his former partner's testimony that he snarled at him "I ought to go to the state prison for something else besides being associated with you--I'd rather go there for homicide."  Both he and Hughes were sentenced to terms of five to seven years in state prison.

While Mr. and Mrs. Bucklow were in Europe during the summer of 1891, Mrs. Bucklow's brother occupied their flat.  On his birthday, a group of friends surprised him with a party.

Living directly below was Mrs. Myra Stevens.  There had already been problems between her and her upstairs neighbors.  She long suspected Mrs. Bucklow of purposely tossing dirty dish water out her window onto her drying clothes.  The birthday party was apparently the last straw.  When the Bucklows returned home, Mrs. Stevens took them to court.

On September 4 the New York Herald reported that Myra, "a tall, expensively dressed blonde, in Jefferson Market police Court, yesterday afternoon, complained that Mrs. Bucklow, who lives in the same apartment house at No. 260 West Seventeenth street, was constantly throwing dirty water on her rugs and clothing."  Myra Stevens was dressed to impress the judge.  She "wore a quantity of valuable diamonds.  A magnificent crescent glistened at her neck and she wore a pair of brilliant eardrops."

She testified that when she had complained about the ruined laundry, "Mrs. Bucklow told her the dirty water was only a sample of what she might expect."  And she threw in the party, embellishing a bit.  The New York Herald reported that she accused Mrs. Bucklow's brother of "entertaining ladies and gentlemen and made sleep to the other tenants impossible by the noise.  They made a practice of hoisting beer up on the fire escape by means of a rope."

Mrs. Bucklow denied the charges, although she admitted that perhaps dirt from her flower pots might have fallen onto her neighbor's laundry.  "She said the complainant made trouble continually for the tenants, that the house did not seem to be good enough for her."  The exasperated judge "advised the ladies to settle their grievances out of court," concluded the article. 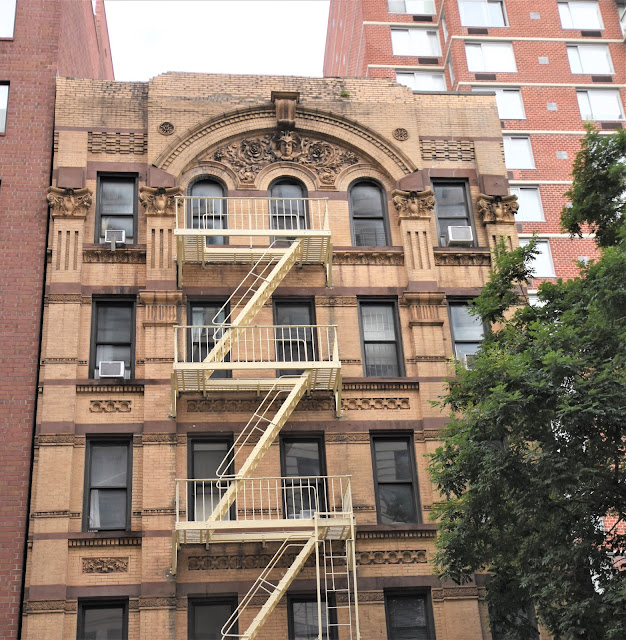 Elizabeth M. Styles was living in the building at about the same time.  A devote Roman Catholic, she worshiped at the Church of the Blessed Sacrament, far north on Broadway at 71st Street.  But as 1894 drew to an end, Elizabeth began showing signs of mental instability.  She began going to the church in the morning, and spending the day there without eating or drinking anything.  Friends and parishioners tried to discourage her but, according to The Evening Telegram, "She listened to no remonstrances and declared that it was necessary for her religious well being that she spend most of her time in the sanctuary."

Elizabeth's obsession worsened and on the night of February 5, 1895 when it came time to close the church, the 50-year old woman refused to leave.  After being "turned out," as worded by the newspaper, "instead of going to her home, she went to the West Sixty-eighth street [police] station and declared that she must remain there."  Captain Gallagher sent for her nephew, Gilbert Jackson, who explained that his aunt "was well connected, but had long acted strangely and her friends could do nothing with her."  Elizabeth was held in the station overnight and then taken to the Yorkville Police Court "to be examined as to her sanity."

In the summer of 1906 two Boston lovebirds, George Forsythe, a bellboy, and May McCormack, a telephone operator, ran away and took an apartment in the 17th Street building.  They were both 22-years old, so were not legally answerable to their parents.  The problem was that they took "cash and clothes belonging to the girl's mother," as reported by The Sun on August 6.  "All told, the mother said, she was a loser to the amount of $350."  That would amount to about $10,300 today.

Boston police sent a telegram to New York with a description of the culprits.  Detectives tracked them down to West 17th Street.  The Sun reported "The youngsters said they came down here to get work, and that after they got settled they intended to get married."

Teen-aged Joseph Collins continued the string of unflattering press in 1924.  At around 9:30 on the night of May 15 Patrolman Daily noticed 15-year old Arthur Klebbe walking along West 14th Street.  There was nothing suspicious about the boy, but two hours later he passed the cop again, this time "carrying a huge bundle," according to The Sun.  Daily stopped him and asked what he was carrying.  Inside the bundle were five fur coats.

At the station house Collins confessed everything.  The coats were part of the total heist of ten stolen from the Arnold Cloak Company on Sixth Avenue.  Collins quickly identified his two accomplices, 17-year old Joseph Collins and 18-year old Edward Murphy.  When police checked arrested Collins at No. 260 West 17th Street, they found the other five coats under his bed.

A renovation completed in 1936 resulted in two apartments per floor.  Among the new residents were William and Jean Shockley, who paid $60 per month rent for the two-bedroom apartment (about $1,100 today).  The couple had married in August 1933 and had a baby daughter, Alison, born in March the following year.

The house was attractive and well kept; the kitchen and bath tiled and as modern as any apartment they visited; and high ceilings and tall windows let in a warm stream of diffuse light.  Visitors entered into a central hall.  The living room was on the left and the bedrooms were in the back of the apartment, behind a dining area.

Shockley was a physicist and inventor.  He would go on to research radar at Bell Labs in Manhattan during World War II and worked on Columbia University's Anti-Submarine Warfare Operations Group.  In 1956 he an two other scientists were awarded the Nobel Prize in Physics and work in developing the transistor resulted in the formation of California's Silicon Valley.

Perhaps the most shocking news story to come out of the building happened in March 1954 when Federal agents arrested 47-year old Mrs. Joan Kaufmann, an unemployed cosmetician.  Joan's neighbors most likely could not have suspected she was part of a major narcotics ring.  She had been under continuous surveillance by investigators for months before her arrested in her apartment on March 5.  Her accomplice, Saul Gelb, was arrested at an apartment on East 56th Street which "he had rented for the purpose of processing narcotics."  Agents also seized more than $2 million in drugs. 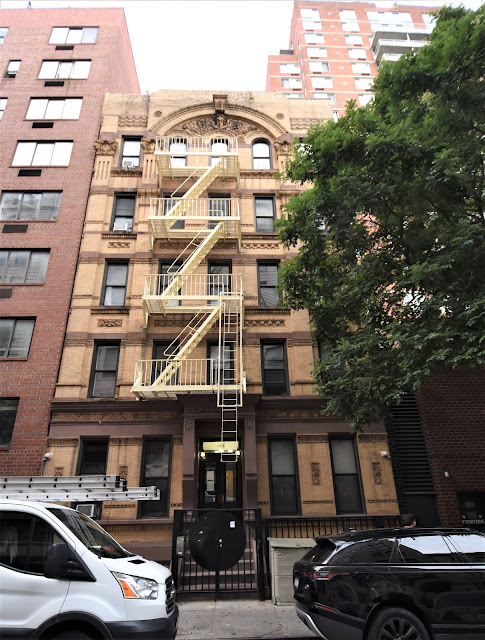 There are still just two apartments per floor in the building.  Sadly the cornice was lost during the 20th century; but overall John C. Burne's eye-catching design is little changed.

photographs by the author
Posted by Tom Miller at 1:14 AM