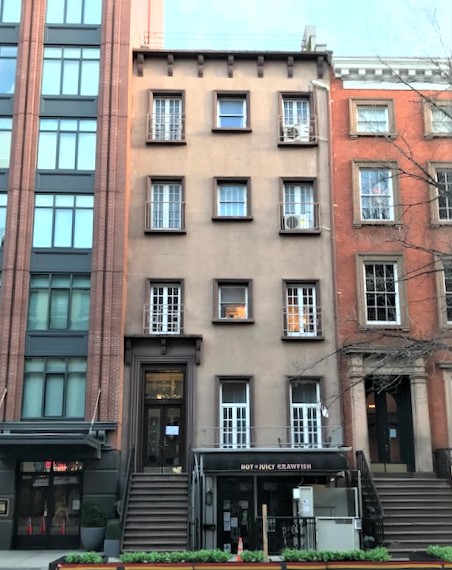 Andrew Norwood, who was described by Valentine's Manual of New York as a "solid and substantial" citizen,  recognized the investment potential of real estate along West 14th Street in the mid-1840's.  As sumptuous homes rose around the rim of the newly completed Union Square in 1845, its refined residential tone spread east and west along 14th Street.  In 1845 Norwood began construction on the first of three abutting houses at Nos. 159, 161 and 163 West 14th Street.   All three would be completed by 1847.  Norwood moved his family into the middle house and by early 1853 had sold No. 163 (renumbered 243 in 1868) to Latimer Bailey.
Described as a "first-class" dwelling, the 25-foot wide brick-fronted house was a blend of Italianate and Greek Revival styles.  A wide brownstone stoop led to the entrance above the high English basement.  The floor-to-ceiling parlor windows were fronted by a cast iron balcony.
Latimer Bailey was a drygoods merchant and importer whose business was located at No. 54 Pine Street.    His wife was the former Augusta Keese.  Along with their son, John K., they shared the 17-room house their daughter's family.  Eliza Ann Keese Bailey was married to Robert M. McJimsey, a partner in the brokerage firm of Jackson & McJimsey.  They had four small children, Emma, Silliman, Snyder and Lucetta.  Another child, Robert, Jr. was born in 1855.
The large family depended on a staff of several servants.  Augusta was seeking to fill two of those positions in April 1856 when she advertised:

Wanted--Two colored women; one as cook, the other as chambermaid.  Good reference required.  Apply at 163 West 14th st.

The outbreak of Civil War--known in the North at the time as the War of the Rebellion--caused upheaval in lives throughout the city and within the Bailey house, as well.  Robert McJimsey was a member of the National Guard's Seventh Regiment, known popularly as the "Silk Stocking Regiment" because its members came from some of the city's wealthiest families.  On June 9, 1861, the New York Herald reported, "A new branch of the service is being organized by a number of experienced members of the Seventh regiment, National Guard, under the names of the Clinton Voltigeurs and Clinton Rifles."  Among those preparing to march off to war was Lt. Robert McJimsey.
Like all well-to-do families, the Bailey-McJimsey family spent the summer months away from the city.  Augusta's staff at the country home was noticeably trimmed down, as evidenced in her advertisement in 1861:

Wanted--A Protestant Woman, as cook and washer and ironer in a private family, a short distance in the country; must be a good baker and understand the dairy.  A girl of 14 to 20 years of age, in same family, as chambermaid.

Although the family would continue to live in the 14th Street house through 1865, in 1862 Latimer Bailey transferred title of the property to his unmarried sister, Eliza T. Bailey.  She never moved in, however.  By the time her brother's family moved out, several of the opulent homes along West 14th Street were already being operated as upscale boarding houses.  Eliza leased No. 243 to Rose Hann, the widow of Roseby Hann, who used it for that purpose in 1866.
The refinement and status of boarding houses were reflected in the number of residents--the fewer the boarders the more exclusive.  In 1866 the tenants enjoyed an entire floor.  Two advertisements appeared that year, one offering the "delightful second floor," furnished or unfurnished, with "first class Board."  The other read: "To Let--With Board, a Parlor Floor, three rooms deep, furnished or unfurnished; private table if desired."
The mention of "private table" was significant, meaning that Rose was willing to serve the parlor floor boarders in their rooms, should they prefer not to sit with the other boarders in the common dining room in the lower level.
Among her boarders in 1867 were attorney Henry Brodhead and his widowed mother, Emily, and banker John D. Bolles.   The Brodheads would remain through 1871.
In 1872 Rose's boarders were the family of clothing merchant James Oliphant; Henry Berkele, a dealer in guns; and iron merchant Andrew J. Campbell.  Oliphant's adult son, William J., was a tailor and worked in his father's business.  Rose Hann leased the house until the spring of 1873.
By the late 1870's widow Mary A. Raymond was the landlady of the boarding house.  Among her boarders in 1879 were Henry J. Parks and John O. Phair, both of whom were clerks, a position with a broad meaning that ranged from highly-paid bank employees to office workers.  That year she made significant renovations to the basement level by installing a commercial space.  Upon its completion she leased it to E. C. Houghton's piano store.
Among the boarders in 1897 was the well-to-do widow Elizabeth Kley and her granddaughter, 13-year old Elise Steele.  The New York Journal said Elizabeth "fairly dotes on her," and described the girl as "unusually well developed for her age, and very pretty."  When Elise disappeared on March 28, Elizabeth thought she knew why.  She told a reporter that the girl "ran away from home because she didn't like the convent where she was going to school."
Detectives searched for a month with no leads.  And that was because Elise's disappearance went beyond any dissatisfaction with her school.  She had been "lured away" and taken aboard a steamship, the Trave, to England in steerage. 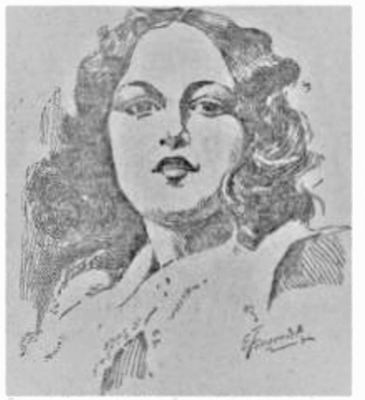 Elisa was deemed "unusually well developed."  New York Journal & Advertiser, June 27, 1897 (copyright expired)
Once in London Elise was left on her own, with no money.  Luckily she had the presence of mind to go to Low's Exchange and inquire about Jessie Lindsay, a friend of her grandmother's whose husband's business was in London.  On April 25 Elizabeth received a letter from Mrs. Lindsay notifying her that she had Elise, who "was poorly clad and had no money."
Jessie Lindsay embarked on a previously unexpected voyage to America with Elise in tow.  On June 27, 1897 the New York Journal and Advertiser reported "Yesterday Elise arrived here on the American liner Paris in the care of Mrs. Lindsay...and was taken to her grandmother's house."  When Elizabeth asked her who had induced her to leave, the girl replied "Well, you've got me back; isn't that enough?"  The newspaper said she "obstinately refused to tell her grandmother...who had given her the money to purchase a ticket to Europe."
Three decades earlier, on the night of November 10, 1865, a group of dockworkers had formed a club in the back room of George Topf's saloon at Hudson and West 10th Streets.  Calling itself the Topf Club, its motto was "Bend, but Never Break."  Over the years the name became corrupted to the Tough Club.
Eliza T. Bailey died in 1907, leaving No. 243 to her nephew, Charles Bailey.   In December 1910 he sold the house to the Tough Club which announced "the building will be remodeled into an up-to-date club house."
The Tough Club had never been political.  A few years later, in 1915, an original member, Simpson Sharp, told a reporter "We organized for purely social purposes, and it was the pride of our members to keep the club sturdy and clean in word and deed."
The club had festive traditions.  On Washington's Birthday the members enjoyed a dinner, preceded the night before by a ball, and another on Thanksgiving Day.  A summer "chowder" was held each year at College Point, in Queens.  And once a month between October and April a dinner was held, featuring the club's renowned clam chowder, the recipe of which was safely guarded.
The men supported the families in the gritty neighborhood near the docks.  The club paid $250 to the families of each deceased member within 48 hours of his death.  Additionally, it maintained a large plot in a Cedar Grove cemetery for members whose families could not pay for graves.
But the most notable event was the annual children's Christmas party.  The Sun said "Jew and gentile boy and girl gather for the big Christmas function held each year--to eat ice cream and cake in the clubrooms and drink all the lemonade in the world and receive from Jimmie Dunnell as they pass out of the door a big box that holds a doll which is as pink and white as a live English girl; or, if you're a boy, a football or a ketchin' glove."
Although the Tough Club had no intention of discontinuing the half-century old tradition, its pending move to 14th Street was devastating to the Greenwich Village children.  On December 19, 1910 The Sun reported that "woe spread through the district yesterday when somebody came out of the Tough Club's basement...and started the story that the Tough Club has bought a house away up town at 243 West Fourteenth street, scarcely in the Village at all, and is going to remodel the house and live there henceforth."
The move, said the article, would come just before Christmas.  "It was a blow to the little boys and girls who had counted on the pink and white dolls and the reg'lar league baseballs."  Spirits were restored, however, when Jimmie Dunnell promised that that year's party would still be held in the old clubhouse.
The renovations of the building did not come until May 1912.  The Tough Club hired architect William S. Boyd to make $8,000 (about $218,000 today) in extensive alterations.  The Sun reported on May 14 that "The entire interior is to undergo changes."  It was most likely at this time that the center openings of the upper floors were shortened and a stucco-type material applied over the brick.
By the club's 50th anniversary in November 1915 its 350 members--originally longshoremen--were from all walks of Greenwich Village life.  But its traditions were still revered.  On November 11, 1915 The New York Times noted, "One of the occasions on which there is sure to be a large gathering of the club is on the second Saturday of every month, when the huge chowder pot in the basement is filled with such delicacies, including two bottles of choice wine, as go into the making of a Tough Club clam chowder."  Ninety gallons were produced each month so that members with could take a pailful to their families at home.
Rather amazingly, as West 14th Street continued to change, the Tough Club held on.  New York Magazine journalist Bob Drury wrote in its May 10, 1993 issue, "To walk into the Tough Club, one of the oldest nonprofit private clubs in the city, is to revisit a time when the gears of New York were oiled by whiskey...A visitor half expects to spot former members Fiorello La Guardia, Gene Tunney, and Jimmy Walker--the first perusing the funnies, the second shadowboxing, and the last with a flapper on each arm, knocking back a dram of Irish whiskey."
Drury reminisced on the varied backgrounds of the club's members over the decades--"captains of industry, professional athletes, labor leaders, journalists and countless civil servants."  But at the time of his article, things were looking bleak for the venerable club.  Membership had dwindled from 860 in 1958 to 17. 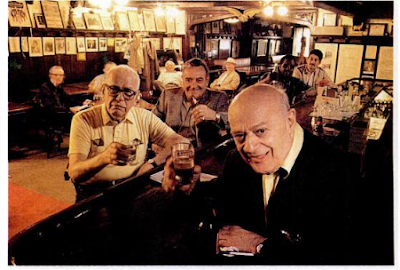 Bartender and member Frank Scavone (front) and some of the aging members in the barroom.  New York Magazine, May 10, 1993
In 1998 the upper floors were converted to three apartments.  Shortly afterward the end of the line came for the Tough Club, which had been relegated to the former storefront space.  On August 25, 2002 The New York Times reported that Erica Miller and Nathan Foreman were transforming the old club space "into a contemporary American restaurant called Kloe."
The pair removed the old woodwork.  On one section a poem was painted in gold Old English lettering on dark red mahogany:
Never are ill spent the hours
Laid out in harmless merriment
With mirth and laughter
Let old wrinkles come
Eight decades of Tough Club members had read those words over their glasses of whiskey. 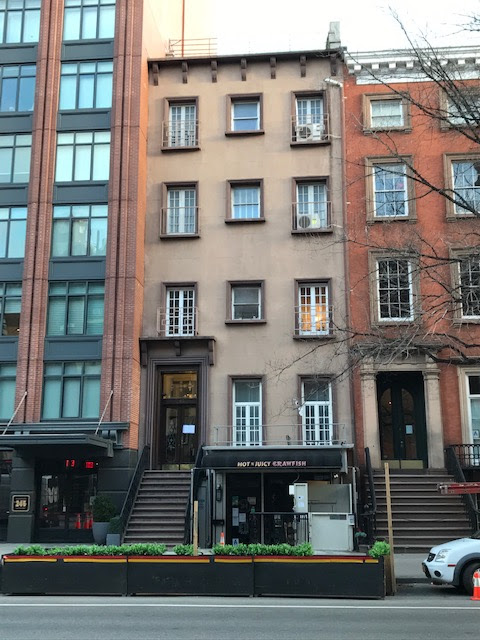 Today a Cajun restaurant, Hot n' Juicy Crawfish, operates from the old storefront.  The Tough Club is mostly forgotten, but the Latimer Bailey house still maintains much of its domestic appearance from a more elegant West 14th Street of nearly 170 years ago.
photographs by the author
Posted by Tom Miller at 1:12 AM