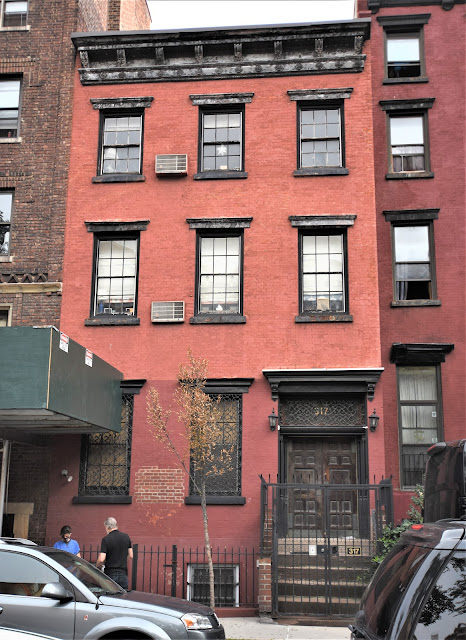 In the first years after the end of the Civil War grocer John Haines and his family lived in the relatively new Italianate style house at No. 239 West 18th Street (renumbered 317 in 1868).  He would not remain especially long, nor would any of the other owners and renters for the rest of the 19th century.
The turnover of residents was dizzying.  In 1870 Samuel S. Berck, who operated two hat stores on Eighth Avenue moved in.  Sarah McCoy, the widow of Alexander McCoy, shared the house with the Berck family.  She was either a boarder or, possibly, Mrs. Berck's mother.  In 1873 another hatter, Philip Lasky, moved in with his family's boarder, clerk Jacob Baum.

On October 24, 1875 an advertisement appeared in The New York Herald which offered "To Let--The second floor of house 317 West Eighteenth street, to a small family of adults; all improvements.  Inquire of owner, on the premises."
That owner may have been Anthony Reiss, Jr., for he held title to the house by March 1876.  Born on May 11, 1830 his father, Anthony Reiss, Sr. was among the group of musicians who formed the New York Philharmonic and was elected its first vice president.
Anthony Jr. studied violin and piano as a youth, and his first job was with the orchestra that traveled with singer Jenny Lind in her New York concerts.  By the time he purchased the 18th Street house he had led the orchestras of several theaters and had been musical director of the Lyster English Opera Company, Maguire's Italian Opera Company and the Clara Kellogg Opera Company, among others.
Reiff's son, Henry, was not so musically inclined.  He is listed as a machinist in 1876 and '77.  The following year he moved out of the family house, possibly because of marriage.  His parents moved to No. 246 West 21st Street and in March 1885 and leased the 18th Street house.  Their ad described it as "20 feet wide, 12 rooms, fine yard, rent $1,000."  (The rent would equal about $2,830 per month today.)
Reiff sold No. 317 to Moses Dunlap and his wife, Anna, in 1889 for $12,500, or about $351,000 in today's money.  It appears that it was the Dunlaps who updated the house--giving it cast metal lintels, heavy Mission style entrance doors, and a swirling cast iron transom grill that hinted at Art Nouveau.
Moses and Anna M. Dunlap, too, moved on quickly.  The offered the house for sale in 1893, describing it as a "cosy home in the best repair and on a fine street."
Once again residents came and went with lightning speed.  In 1895 it was home to Dr. Philip Becker, and two years later to Guy R. P. Ellison.  Ellison was described by The New York Press in 1897 as "a handsome and well-dressed man of 35 years."  He was the vice-president of his family's druggist firm, Van Horn & Ellison Company.  But in June 1897 family ties were not enough to keep him out of the courtroom.
Police knocked on the door of No. 317 West 18th Street early on a Sunday morning, June 20, and arrested him.  His brother and treasurer of the firm, S. Harris Ellison; the president; and another relative, "Riff" Ellison, had filed charges against him for forgery.  He was held in jail overnight and faced the judge and his accusers the following morning.  He had written a company check for $208.  The other firm members said he had no authority to do that.
Ellison exploded at the judge.  "It is an outrage to arrest me on a Sunday morning and bring me here, when it is known I am not guilty of any offense.  If I were guilty I would not mind it, but it is simply ridiculous for you to hold me."
Ellison's relatives refused to supply bail so he sent for his sister, who brought the $500.
When John J. Hannon purchased the house on February 13, 1904, it finally had long term residents.  Hannon and his wife, the former Mary A. Curtin, had two sons, Francis and James, Jr.
John J. Hannon was a "truckman," who was also involved in politics.  He was the Republican leader of the Seventh Assembly District.  It was a position that sometimes aligned him with some shady characters.  In December 1904 Policeman Joseph Lang arrested a drunk, John Pritchett.  When he had the chance, Lang slipped $2,500 in cash from his impaired prisoner's pockets--two $1,000 bills and one $500 note.  But he was caught.  The judge pointedly told Lang "There is no different rule for policemen who are charged with crime than there is for any other person."
Lang was sent to the Tombs, but "Half an hour later John J. Hanlon [sic] a truckman of No. 317 West Eighteenth street, gave bonds for him and he was released," reported The New York Herald. 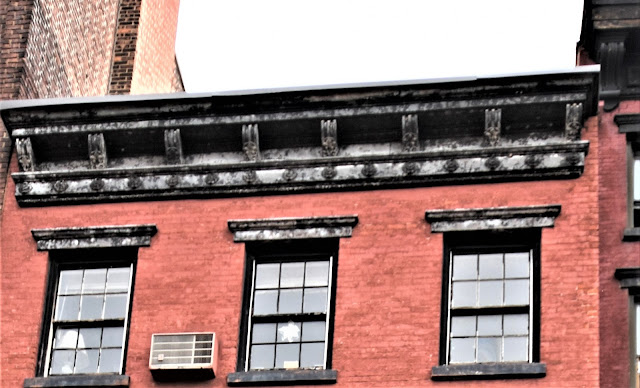 A few months later, in June 1905, Hannon posted $6,000 bond for John W. Wooten, indicted for grand larceny and conspiracy.  But at the last minute Hannon surprised Wooten and his attorney by withdrawing the bond.  "We knew nothing about it, nor had we the slightest intimation that bail with be withdrawn.  What Mr. Hannon's reason are we don't pretend to know," said the lawyer.  And Hannon wasn't talking either.  A reporter who knocked on the 18th Street door was told he was out of town.
Only a year after moving into No. 317 West 18th Street, John J. Hannon died.  His funeral was held in the house on September 9, followed by a service at St. Bernard's Church.  The Hannon family remained in the house for decades.  Francis was still living here with his mother on September 24, 1933 when he was married to Mary Mornweig in Queens.  His brother James stood in as best man.
The newlyweds remained at No. 317.  The family received horrifying news in August 1949.  James was now 54-years old and managed the Seaside Bar and Grill in Rockaway Beach.  The Long Island Star-Journal said he "was known as 'Scarface' Hannon in the prohibition era."
At 4:50 on the morning of August 11, 1949 Hannon was walking along St. Marks Avenue when a man jumped from a late model car and "killed Hannon with four shots from a foreign made gun."  Detectives said it appeared to be a revenge murder.  Assistant District Attorney Kerwick told reporters, "His friends say Jim Hannon never had an enemy in the world, but I think his friends are mistaken.  He had one enemy, at least--the one who caught up to him and shot him dead." 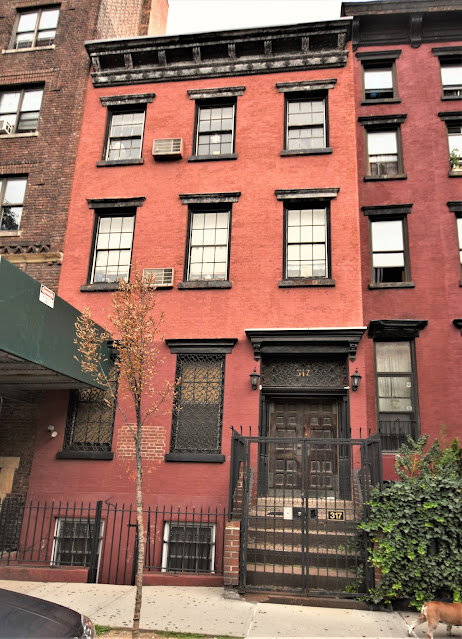 A renovation completed in 1977 resulted in a duplex in the lower two floors, and two apartments each on the upper floors.  A second remodeling resulted in a single family home with an apartment on the third floor.