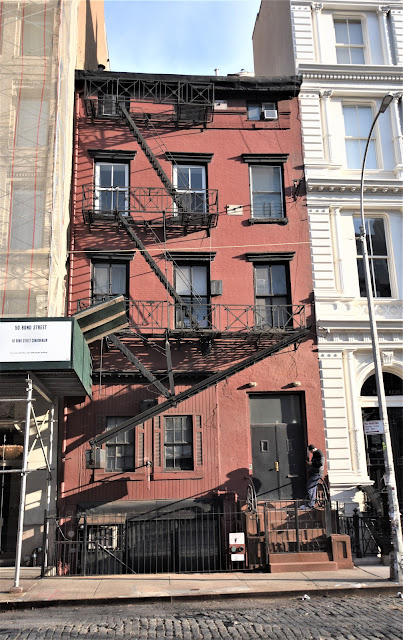 Even while horribly disfigured, the ca 1836 house manages to hint at its former elegance.
Around 1807 Bond Street was laid out, but it would not be until around 1812 that the first house appeared.  Before mid-century it would boast 60 high-end houses which rivaled and surpassed the grandest homes on Broadway, St. John's Park and Lafayette Place.  Sturges S. Dunham, writing in Valentine’s Manual of Old New-York in 1907, noted “Bond Street was one of the best known streets in the city and none stood higher in favor as a place of residence.”
In 1834 builder Ephraim H. Wentworth purchased the plot at No. 52 Bond Street.  He sold the property to Jonathan J. Coddington four years later.  Coddington was highly involved in politics and in 1844 would be the Democratic nominee for mayor.  It is unclear which of the men erected the 25-foot wide house on the site, but appears that neither of them lived in it.
The brick-faced house was an early example of the Greek Revival style on the street lined mostly with Federal style residences.  The railings of the stone stoop were highly unusual--their serpentine design engulfing two palmettes, a popular motif of a generation earlier.  The stone surround of the entrance was expected in the architectural style, its pilasters upholding a heavy stone entablature.  A squat attic floor replaced the peaked roof and dormers seen in the neighboring Federal houses. 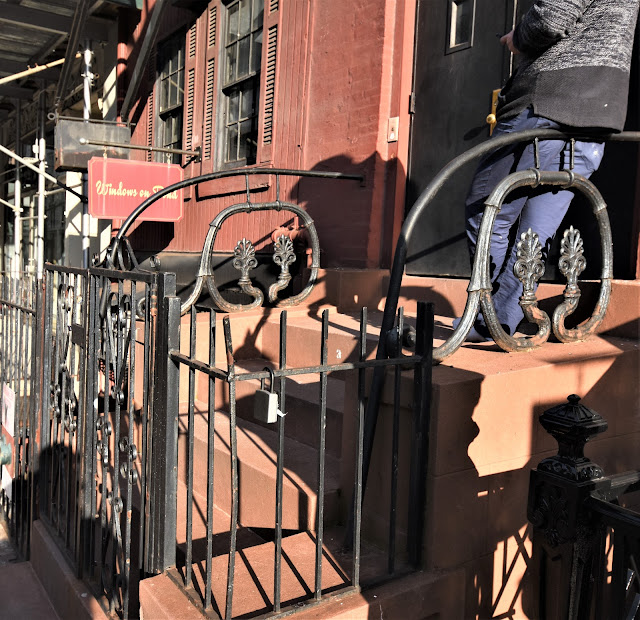 Somewhat battered today, the stoop railings may be unique.  Under its coat of paint the paneled stoop may be marble, as was the case with other mansions on the block.
According to Valentine's Manual of the City of New York in 1917, "The first occupant of No. 52 Bond street seems to have been James Iddings, assistant cashier of the United States Bank, then at 34 Wall street, opposite the old Merchant's Exchange."  Iddings was appointed to that position on August 30, 1838, the same year Coddington purchased No. 52 Bond Street.  It came with an annual salary of $4,000--about $115,000 today.
In 1841 Iddings moved to Brooklyn.  An advertisement appeared in The Evening Post on April 5 that year offering the "three-story house, No. 52 Bond street" for rent.  It became home to teacher Esther Ann Devereux for a year (she moved across the street to No. 55 in 1843) and the house next became home to Dr. John Davis.
Dr. Davis's home, like all the others along the block, would have been furnished in high style, with oil paintings, marble and bronze statuary, and custom-made furnishings.  He almost assuredly ran his practice from the house as well.
By the first years of the 1850's the wealthy residents of Bond Street were moving further north as commerce threatened their refined neighborhood.  Dr. Davis apparently gave notice to Coddington of his intentions to move in 1851.  An advertisement in the New-York Daily Tribune that February offered the house for sale.
Davis moved to No. 37 Bleecker Street in 1852.  No. 52 became a high-end boarding house, with residents like William Gardiner, a cabinetmaker at No. 69 Gold Street who lived here in 1853 and '54.  An advertisement in the New York Herald in May 1855 read:

That the ad mentioned single gentlemen, but not single ladies, was significant.  Respectable boardinghouses did not accept unmarried women for fear of housing a disreputable woman and the taint she might bring to the establishment.  An apparent exception was Eleanor Williamson, a widow, who lived here in 1855 and '56.  Another boarder at the time was David Ritter who ran a drug store on the Bowery; and James H. Holden moved in and operated his dental office (presumably in the basement level) in 1857.
Unmarried women who found themselves pregnant not only faced ruin, but in many cases they could barely afford to feed themselves let alone an infant.  The problem resulted in newborns being abandoned on doorsteps.  On December 28, 1855 a new mother sneaked down the stairs to the basement of No. 55 and left her baby outside the door.
The following day the Evening Post entitled an article "Another Discarded Infant" and reported "Last night, though the weather was intensely cold, some inhuman mother or father left a little boy, about two weeks old, in the area of house No. 52 Bond street.  The parentless child was kindly cared for until he could be sent to the Governors of the Alms-House."
It appears that Dr. Payton Spence and his wife, Amanda, were operating the boardinghouse by 1862.  Dr. James Holden was still here and would operate his dentist office through 1865.  Edward W. Bartholomew, a maker of "medicines" on John Street, was renting a room by 1864.
The change in the neighborhood was reflected in the Spences' questionable side business.  An advertisement in The Herald of Progress on May 24, 1862 read:

Dr. and Mrs. Spence may be consulted at No. 52 Bond Street, New York  Mrs. Spence, in her capacity as a Medium, will prescribe and manipulate for physical, mental, and moral diseases, acute or chronic.

A few patients can also be accommodated with rooms and board.  Letters of inquiry may be addressed to either Dr. Payton Spence or Mrs. Amanda M. Spence, No. 52 Bond Street, New York city.

No. 52 briefly became a private house again when banker Henry Bischoff purchased it in 1865.  He shared office space at No. 58 Bowery with his son, Henry Jr., who was an attorney.  Although the Bond Street neighborhood was in decline--most of the once-elegant homes now being used as dental offices, boarding houses or small businesses--the Bischoffs were well-to-do and well respected.
But when Bischoff sold the house in 1868 to Frederick Bornhagen and his wife Dorothea, it again became a boarding house.  Born in Prussia, Bornhagen was a tailor, as was his son, Francis.  He leased the basement level as a commercial space to L. Levy, a boot and shoe maker.  The Bornhagens' boarders were respectable working-class citizens like Peter Bohl, a barber, and Patrick Keirns, a private detective in 1873.
Then in 1875 Bornhagen leased the basement level to brewer Jacob Ruppert for $1,000 (about $24,000 today).  It was common for breweries to operate their own saloons in the 19th century, a practice that gave them the opportunity to sell only their own goods.  Possibly as a part of the deal, Frederick Bornhagen changed his profession from tailor to "beer."  He would run the saloon until about 1887.
By then the Bond Street block had become somewhat seedy.  In 1880 the Bornhagens' 11 boarders included an actor and several actresses (who worked most likely in the Bowery theaters nearby), a horse dealer, a barkeeper, two cigar dealers, a painter, and three children.
Although they retained possession of the property, the Bornhagens are no longer listed at the address after the mid-1880's.  In 1887 the saloon was being operated by Max Lasker who ran an illegal "card room" in the back.  Working on a tip, an undercover detective Eugene D. Collins joined in a poker game on November 19 that year.  The New York Times reported that he lost $11 (more than $300 in today's money).  On November 23 the newspaper reported "Yesterday a raid was made upon the place and Lasker, who claimed that it was a private club, was held for trial.  Three men who were arrested with him because they were in the card room were discharged."
Illegal gambling paled to the charges brought eight years later.  In 1894 both the saloon and the rooming house above were being operated by John H. Meyer.  On May 28, 1895 Frank Moss, the attorney for the Parkhurst Society, charged that "from January 1 to May 17 last a large number of disorderly houses flourished in [police Captain Joseph B.] Eakins's precinct, openly and flagrantly, without his interference."
A "disorderly house" was a polite term for a brothel.  The Sun reported "A list is given of six saloons declared to be the resorts of prostitutes and of twenty-one alleged houses of ill fame."  Among them was No. 52 Bond Street, which was labeled a "house of assignation."
It was most likely that scurrilous press that prompted the Bornhagens to convert the entire house to commercial space.  In 1897 furs and fur cap manufacturer M. Cohen and furrier Alex A. Bernstein were among the first to lease space.
Fur merchants continued to fill the building.  The three tenants in 1901 were S. Kanrich, makers of fur hats and caps; and furriers S. Bierman and A. Gottfried.
Bond Street was fast becoming part of the millinery district at the time.  In 1904 Wm. B. Goldbaum factory produced hat and bonnet frames in No. 52, Kanrich Bros. produced ladies' hats, and the Jacobson-Brilliant Trimmed Hat Co. opened here in 1907. 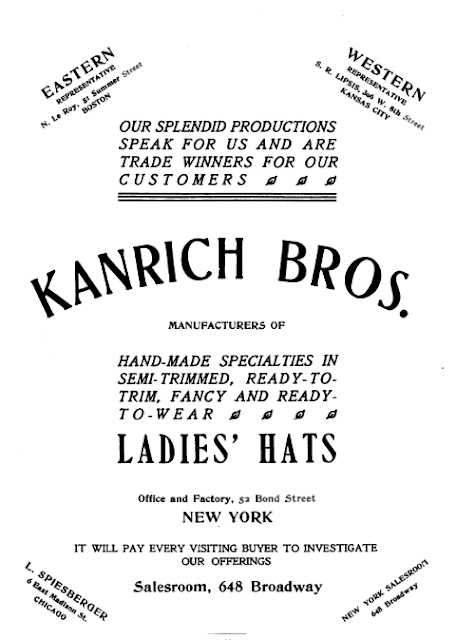 The Millinery Trade Review, January 1904 (copyright expired)
After having owned the property for nearly four decades, the Bornhagens sold it to Michael J. Adrian in 1905.  It continued to house millinery firms for most of the first half of the 20th century.  But as the garment district moved north past 34th Street, the Bond Street block became decidedly more industrial.  No. 52 was home to electricians, ironwork firms, and at least one leather goods company through 1950. 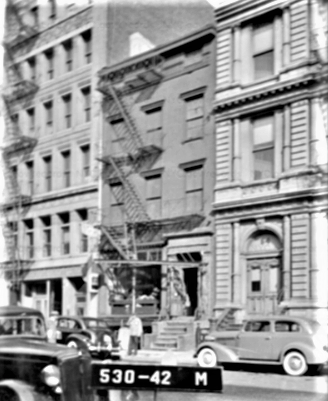 In 1941 the Greek Revival entrance surround survived and a show window has been carved into the parlor floor.  via the NYC Dept of Records & Information Services.
A holdover from that period in 1987 was automobile parts dealer American Brake Products, run by brothers Harry and Archie Freibaum.  But businesses like theirs were already becoming scarcer as the Noho renaissance changed the face of Bond Street.
By the 1960's space on the upper floors was being used, unofficially, as residential.  In 1966 designers Thelma Toma Holly (known as Toma) and her husband Jan Gero, founded the fashion company 52BOND, in the basement space.  Their factory was located directly across the street at No. 42.  The couple ran their business, 52 Bond Street, Ltd., from the space until 1970.
A renovation completed in 2008 resulted in one residential space per floor.  Sadly, sometime after 1974 the Greek Revival entrance surround was removed.  Despite the industrial metal doors, and the parlor floor alterations, the overall domestic appearance of the Iddings house survives.
photographs by the author
Posted by Tom Miller at 1:18 AM