On April 18, 1868 a notice appeared in The New York Herald that read simply "For Sale--The Valuable Lot, 114 Franklin street."  An old house had stood on the lot for decades and had been operated as a rooming house in the 1850's.  Next door, at No. 112, a new loft and store building had just been completed for Max Weil.  It was designed by architect Samuel A. Warner.

The empty lot was purchased by Elliot C. Cowdin.  He was simultaneously erecting two buildings at Nos. 96-98 and 100-102 Grand Street designed by Benjamin W. Warner, who shared an office with his architect brother Samuel.  He now gave Warner the commission to design No. 114 Franklin Street.  The resultant building would be identical to No. 112; and although the design clearly came from the drawing board of Samuel A. Warner, Benjamin gets the credit as architect of record.

Completed in 1868, like its twin No. 114 it rose five-stories and was faced in marble above the cast iron storefront.  A handsome blend of Italianate and French Second Empire styles, it featured segmentally-arched openings flanked by Doric pilasters.  A pronounced still course separated each floor.

Cowdin was a man of broad interests.  The New York Times would later say he "made his name equally familiar in business, politics and commercial and agricultural literature."  He was the principal in Elliot C. Cowdin & Co., importers and dealers of "French fancy goods."  But his business did not move into the new Franklin Street building which he had erected as an investment only.

Among Cowdin's early tenants was Louis Weddigen & Co., dry goods importers and commission merchants.  Customs records reveal that the goods the firm brought into the country included "Italian cloths and worsted dress goods" along with velvet, satin and silk.

Another dry goods merchant, Mackintosh, Green & Co., was unintentionally involved in a scam which cost citizens thousands in tax dollars.  In 1873 the Department of Charities and Correction forewent the bidding process and granted a contract for dry goods to "a person named Sternback."  Suspicious, the New York Herald launched an investigation.  It discovered that Sternback did not appear in the City Directory, he had no known place of business, and there was no evidence that he was a dry goods merchant.  What was known was that he purchased goods at a discount and sold them to the city at an inflated price.
Among its evidence, the newspaper pointed out that he "purchased of Mackintosh, Green & Co., of No. 114 Franklin street, 9,000 yards of woollen stuff at 35 cents per yard, with 5 per cent off, and sold it to the city at 45 cents per hard, with 5 per cent off, making nearly $1,000 out of the taxpayers by the one transaction."

The building continued to house garment-related merchants, like Oberndorff & Co., here in the 1880's; and Freeman D. Marckwald, an importer of whalebone, "horn strips, polished dress bones and toothbrushes," the following decade.  Whalebone was an important component in the manufacture of corsets.

As had been the case with Mackintosh, Green & Co., in February 1897 Freeman & Marckwald was also involved in a scam and it appears the firm was an innocent pawn.  Ferdinand May was arrested for fraud, having negotiated the sale of $222,310 in bills of exchange to the firm of Weil, Auerbacher & Co.  The bills were drawn on Freeman & Marckwald.

According to The Sun on February 21, May told Weil, Auerbacher & Co. "that his firm had sent Marckwald large consignments of whalebone and that Marckwald had about half a million dollars' worth of the whalebone in storage."  None of that was true.  But May had cashed in the bills before the scam was discovered.

Marckwald was called in to testify.  He "said that there never was any [whalebone] in storage with him," reported the Evening Telegram on March 3.  May was sent off to prison and there was no indication of Marckwald's involvement at all.

And yet, soon afterward Freeman D. Marckwald mysteriously packed his things and sailed for Europe.  A year later Deputy Sheriff Carrahar took control of the business.  The Sun reported on October 2, 1898 "The attachment was obtained on the ground that Mr. Marckwald had been absent from his place of business here for more than a year and was supposed to be in Europe."

In 1886 the firm of Switzer & Schussel was formed to import and manufacturer handles for umbrellas and parasols next door at No. 112.  Then late in 1911 business had grown to the point that Switzer & Schussel continued the manufacturing, while a newly-formed office, Schussel & Manly, handled the import and sales.  Interestingly considering the period, Edward Max Schussel's partner was a female, Gertrude A. Manly.  Their new offices opened in No. 114 Franklin St.

In its January 1912 issue Luggage and Leather Goods commented that Schussel & Manly would be showing its "large domestic line, consisting of novelties in fancy woods, horn and Ivorine, a very large and attractive line of import handles, unique in styles and prices, during the month of February.  Also a full line of imported umbrella frames, handles, mounts, etc."

But like so many German-based businesses throughout the United States, World War I dealt a crushing blow.  In February 1918 Trunks, Leather Goods and Umbrellas reported "Schussel & Manly, manufacturers and importers of umbrella handles and canes, are retiring from business."  It was not so simple as that.

The anti-German sentiment which swept the country resulted in the Trading With The Enemy Act of 1917.  It gave the Government broad rights to confiscate the properties of German-born businessmen whether or not they were American citizens.

The Alien Custodian Report listed the "enemy interest" in Schussel & Manly Manufacturing Co. at 100 percent.  Edward Max Schussel and Gertrude Manly had not truly retired.  Instead, as reported in the Report of the Alien Property Custodian, "The business was liquidated under enemy trade license."  All assets of Schussel & Manly were confiscated by the Alien Property Custodian.  Max Schussel moved his family back to Germany, as did Gertrude Manly.

While dry goods related firms remained in No. 114 for decades years following the war, a variation in the tenant list began appearing in 1921.  That year Ace Specialties Corp. was listed here.  It dealt in goods like paper goods, like cups, doilies, napkins, as well as "sanitary spoons," tin kitchen utensils, and toilet paper.

The last quarter of the century saw the rediscovery of Tribeca arrive on Franklin Street.  By 1977 the Bromm Gallery was in the building, and in 1999 Grace Bar and Restaurant opened.  It was described by The New York Times food critic Florence Fabricant as "a sleek, Art Deco-inspired place, with tapas-style food at the bar."

As was happening with so many 19th century loft buildings throughout the district, a renovation completed in 2008 resulted in one apartment per floor above the store.  Two years later, in March 2010, Albert Trummer told Florence Fabricant of his plans for the ground floor.  He said his Theater Bar "will be inspired by Vienna and the nightlife of the 1930s and '40s."  The theatrically-themed venue opened in April 2011. 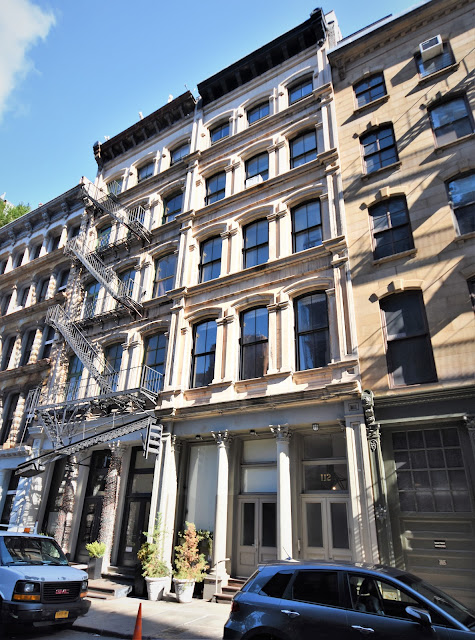 Both No. 114 and its twin sister survive remarkably intact after more than 140 years.

photographs by the author
Posted by Tom Miller at 1:25 AM