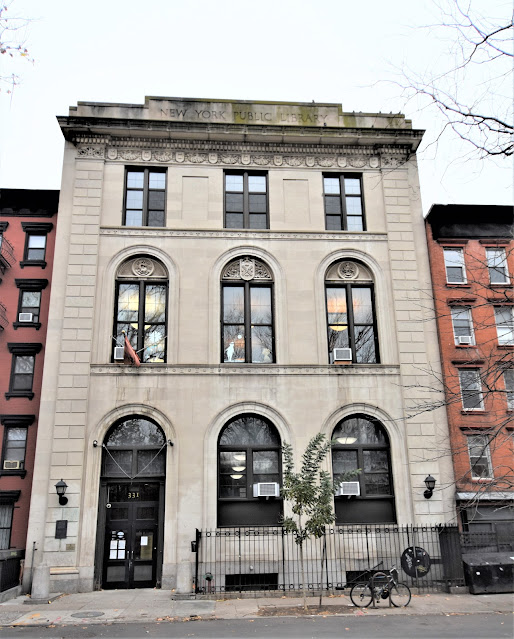 In 1902 the Director of the New York Public Library related the story Andrew Carnegie had told him years before.  Carnegie had reminisced about the problems he experience as a boy trying to obtain books to read.  Billings said that the little boy and future millionaire made a vow “no, perhaps not a vow; it seems unnatural to accuse a Scotchman of a vow—but a promise—that if he ever obtained the means he would establish a public library.”
By the turn of the century Andrew Carnegie not only had the means to establish a library, but scores of them.  The philanthropic multimillionaire who had been born in the attic of a tiny house in Dunfermline, Scotland began giving tens of millions of dollars away; distributing his wealth so other impoverished boys would have an easier time.
There was no shortage of indigent children in the neighborhood surrounding Tompkins Square.  A refined residential district in the 1850's, it was now mostly peopled by immigrants.  On November 27, 1904 the New-York Tribune reported "The new building erected from the Carnegie fund for the Tompkins Square branch of the New-York Public Library, at Nos. 331 and 333 East Tenth-st., will be opened with formal exercises on Thursday, December 1."
Designed by McKim, Mead & White, the dignified neo-Classical was clad in limestone and rose three stories.  The arched openings of the first floor were echoed at the second, where the tympana were filled with intricate carvings.  A frieze of swags and shields ran below the stone cornice which supported a parapet that announced New York Public Library. 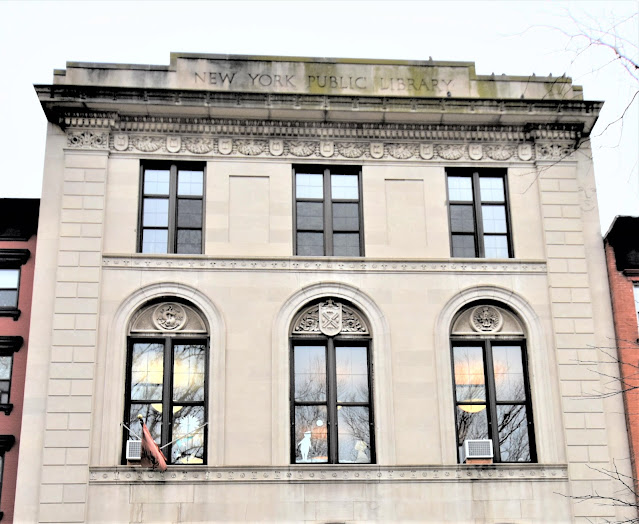 On the main floor were the circulation room, reference room for adults, and a small office.  The second floor held the children's circulating and reading rooms, and on the third were the general periodical and newspaper reading room and an apartment for the janitor's family.  When the Tompkins Square Branch was officially opened there were 16,000 books upon its shelves. 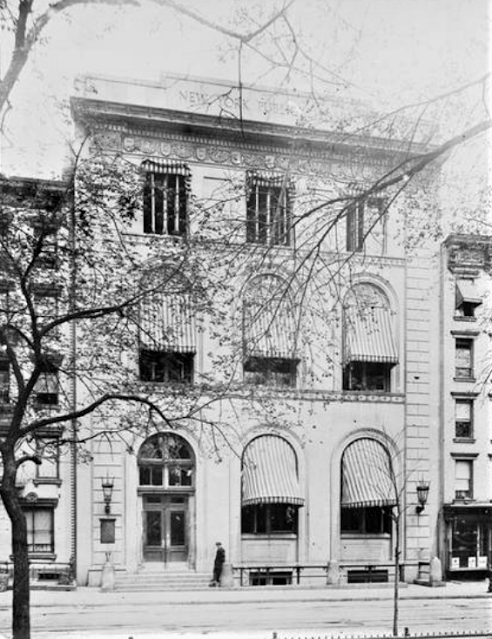 Years before air conditioning canvas awnings helped keep the interiors cool in the hot summer months.  from the collection of New York Public Library
The library was instantly popular among the locals.  Before the doors opened in the mornings lines would form down the block.  Finding a chair in the reading rooms was often no easy task, and children and adults alike competed for popular books to read at home.
On October 21, 1911, for instance, The Sun noted, "In the Tompkins Square branch of the public library...there are twenty-five copies each of 'Oliver Twist' and 'David Copperfield' on the shelves.  No, not on the shelves.  For even with these twenty-five copies apiece it is almost impossible to keep one on hand." 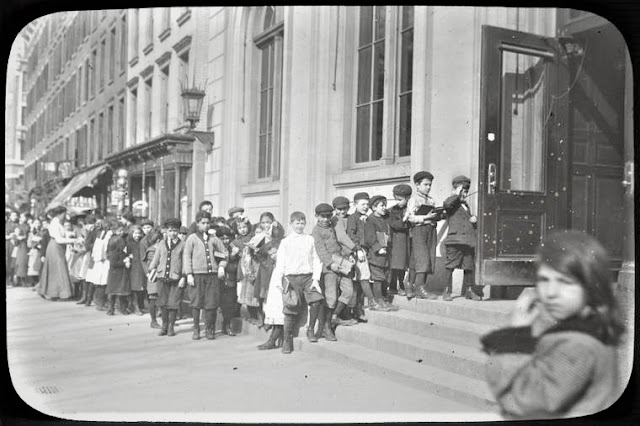 Children line up to enter the library (the reversed negative places the doorway on the wrong side).  from the collection of the New York Public Library 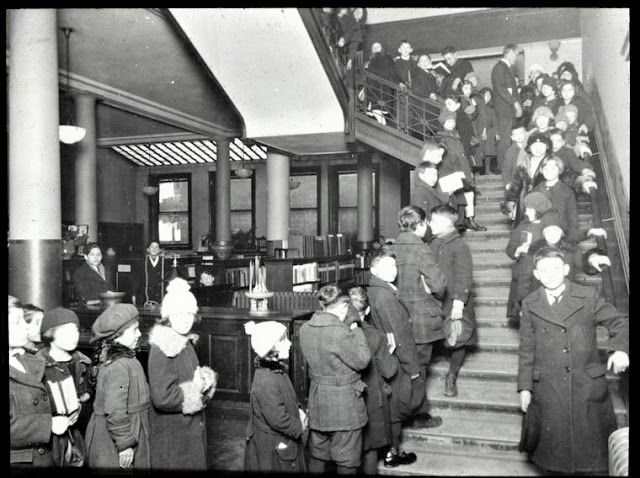 And upstairs and downstairs lines inside kept order.  from the collection of the New York Public Library
The library served the community in other aspects, as well.  Agencies reached out to tenement families in efforts to improve their lives through instructional lectures or displays.  Such was the case on December 6, 1915 when The New York Press reported "An educational food exhibit designed to show the nutritive values of staple food products will be opened to-night in the Tompkins Square Branch of the Public Library...under the auspices of the New York Association for Improving the Condition of the Poor." 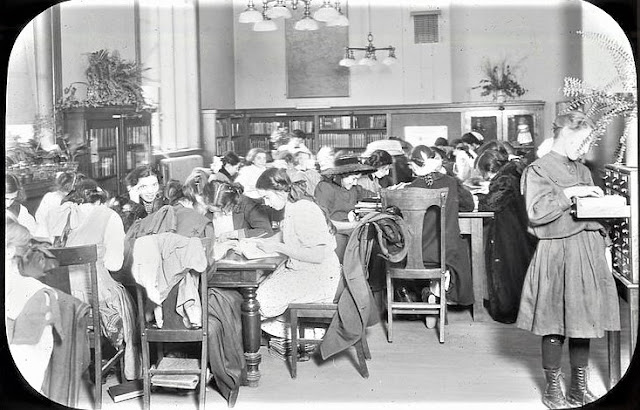 All chairs are filled in this view of the reading room.  from the collection of the New York Public Library
Journalist Paul M. Paine wrote an article entitled "Through Library Windows--The Foreign Born" in The Sun on January 4, 1920.  In it he spoke of the popularity of the Tompkins Square Library among the younger users.

In particular I would like you to see the children's room on the second floor.  You would have to step carefully to keep from treading upon some of these bright eyed lovers of good books, for they are as the sands for multitude.  The eagerness with which the visitor is welcomed by the readers as well as by those who have charge of them is almost pathetic, so plainly does it prove that the wonderful work which is being done in these foreign branches, as we call them, is passed by unnoticed by New Yorkers and visitors alike. 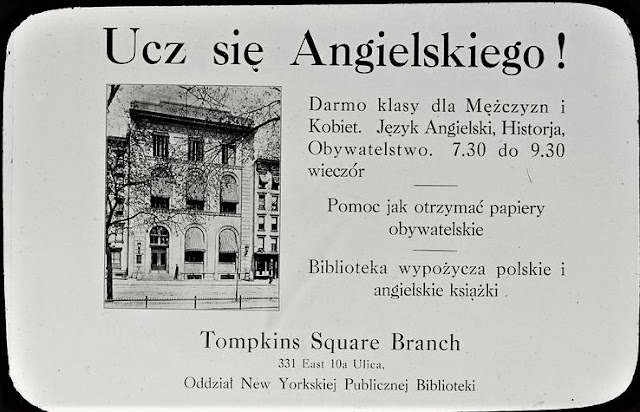 This advertising card offered "Learn English!" to Polish residents in October 1920.  from the collection of the New York Public Library
Free community activities here in the early 1950's included "story hours" on Saturdays.  Two sessions, one for children from 6 to 8 years old and another for those 9 to 12, were held. 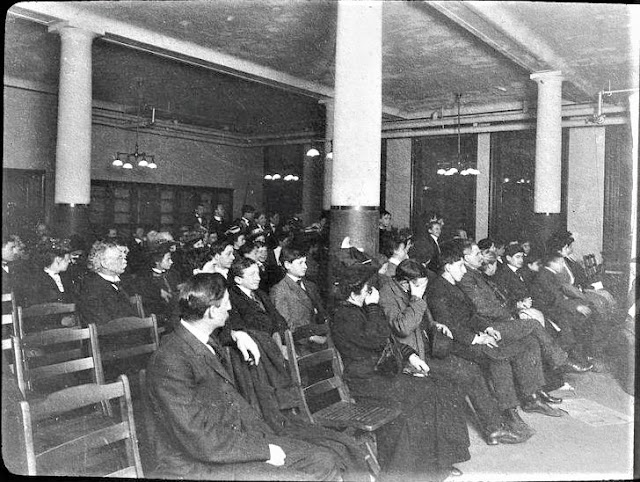 Adults on folding chairs listen to a Board of Education lecture "From Venice to Naples."  from the collection of the New York Public Library
Two decades later the Tompkins Square neighborhood was still a melting pot.  When the library celebrated its 75th anniversary on December 14, 1979, it staged readings "by representatives of the ethnic groups that have lived in the neighborhood," as reported by The New York Times.  Among them were authors Pietro di Donato and Yuri Kaprolov, poet and artist Fay Chiang, and Hispanic playwright and poet Tato Laviera.
When the branch was closed for renovations (including removal of lead paint) in 1994 its importance among the neighborhood families became clear.  Resident Lin Wefel told Bruce Lambert of The New York Times, "Among the playground moms, it's one of our big topics...There were even rumors that they may close it completely."  She lamented, "They had all these great things--story hours, movies and classes.  We'll especially miss it in the winter when the kids stay indoors and get cabin fever."
The renovations were worth the wait, however.  Lambert noted they included "the installation of air-conditioning and an elevator, modifications to give access to the disabled, new studios on the third floor for local artists and new furniture, decoration and equipment." 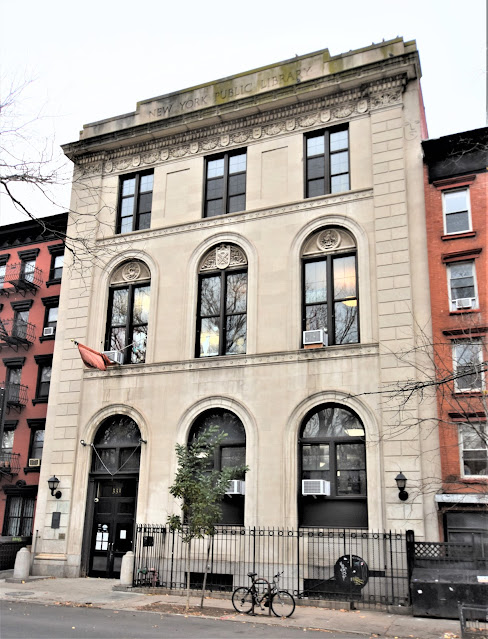 The Tompkins Square Library continues to be an integral part of the neighborhood.  Its stately façade, designed by one of America's most renowned architectural firms, is noteworthy.
photographs by the author
Posted by Tom Miller at 1:18 AM