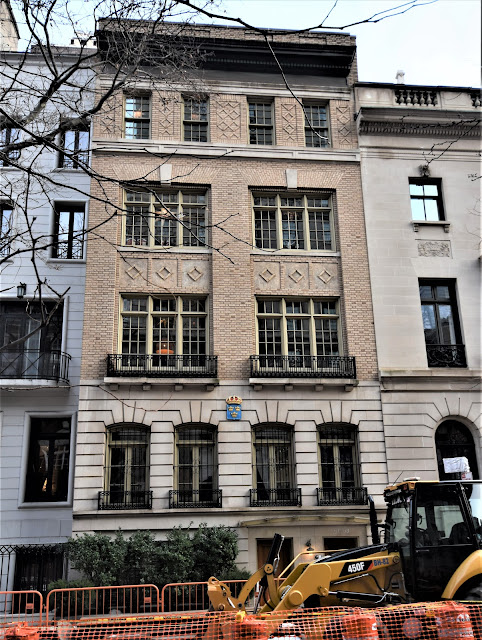 In 1880 developer E. T. Hatch completed construction of six high-stooped brown houses on the north side of East 64th Street, between Madison and Park Avenues.   Each of them rose four stories above an English basement.  No. 63 was home to architect Charles William Romeyn by 1899 when he did the equivalent of $6,360 worth of interior renovations.
Born in Kingston, New York in 1854, Romeyn had begun his career in 1885 in the offices of William Belden Olmstead, best known for his design of Chicago's 1869 City Hall and the Fulton Ferry House in Brooklyn.  By now he had had his own practice for six years and had already established a solid reputation.
Romeyn and his wife, the former Caroline Estelle Young, had four children, Radcliffe, Emma Langworthy, Estelle Young, and Rosalind.  Visible in society, Caroline was a member of the National Society of Colonial Dames (she descended from Hendrick Hendricksen Kip), served as chairman of the "Kitchen Garden" of fashionable St. Thomas's Church and hosted entertainments in the 64th Street house.  On December 9, 1906, for instance, the New-York Tribune reported, "Mrs. Charles W. Romeyn gave the second of two receptions in her house, in East 64th street, for the debut of her daughter, Miss Emma Romeyn."
By the time of Emma's coming out the brownstone house was out of architectural fashion.  Her father purchased the abutting residence at No. 61 and in March 1910 filed plans to convert them into a single, lavish mansion.  The facades and stoops were removed and the front pulled forward to the property line and given a new façade clad in limestone and beige brick.  Although Romeyn's design was overall neo-Renaissance, he liberally borrowed from the currently-popular Arts & Crafts movement--most notably in the stone and brick panels between the third and fourth floors, and in the lattice-work brickwork piers of the top floor.
Rosalind was the first of the Romeyn children to leave.  Her wedding to William Everdell, Jr. took place in St. Thomas's Church on November 9, 1912.
Estelle's debut came the following year.  In what The New York Times called one of the "brilliant assemblies" of the social season, she was introduced at a tea dance at Sherry's in December 1913.  It was the first of "several smart affairs" given by her mother, according to The New York Press.
In the meantime, Radcliffe had graduated from Yale University's Sheffield Scientific School in 1912 and was now working with the American Malleable Iron Company.  His engagement to Rosalie Southgate Elliman was announced in March 1914.  And the following year, on October 17, Estelle was married in St. Thomas's Church to Ernest Wetmore Pittman.
With their children gone, the Romeyns began leasing the 64th Street house every winter season.  In 1915-16 it was rented to Charles A. Frank and his wife, Elizabeth; in 1917 to Edward H. Delafield, and in the 1918-19 season to Bayard Dominick and his wife.  Finally, in October 1924, the Romeyns sold No. 63 to J. Macy Willets.
In the 1930's it was home to the Blagden family.  F. Meredith Blagden and his wife, the former Lydia L. M. Jones, had twin daughters, Barbara and Frances.  Their summer estate, Little Field, was in Sterlington, New York.  It was there, on September 13, 1939, that Lydia kicked off the girls' debutante season with a dinner dance.
The New York Times noted that 175 persons attended and "Mrs. Blagden and the two debutantes received the guests in a tent on the lower terrace."  Among them were some of the most recognized names in New York society, like Auchincloss, Alexander, Pennoyer and Townsend.
The twins' subsequent debutante affairs would not take place in the 64th Street mansion, however.  The following month the Blagdens sold the house to Julius Wellner who announced his intentions to occupy it.
If Wellner did use the mansion as a private home, it was not for long.  A renovation completed in 1944 resulted in two furnished rooms per floor.  The property was acquired by the Royal Swedish Government in June 1946 along with the Jonathan Bulkley mansion on the corner.  The Bulkley house was used as the permanent residence of the Swedish Consul General, while the lower floors of the former Romeyn house were used by the Swedish Consulate, with two apartments each on the top two floors for staff. 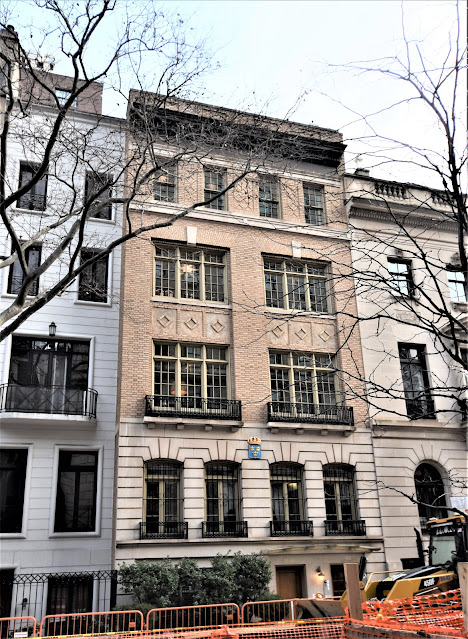 The insignia of the Swedish Government on the second floor facade is the only hint of its occupancy.
In 1984 restoration architects Rothzeid, Kaiserman, Thomson and Bee, working with Lane Brown, initiated a renovation of both buildings.  No. 63 once again became a single-family residence, home to the Swedish Consulate General.  Other than replacement doors, it is remarkably unchanged since Charles W. Romeyn combined the two vintage brownstones into a single opulent home.
photographs by the author
Posted by Tom Miller at 1:14 AM