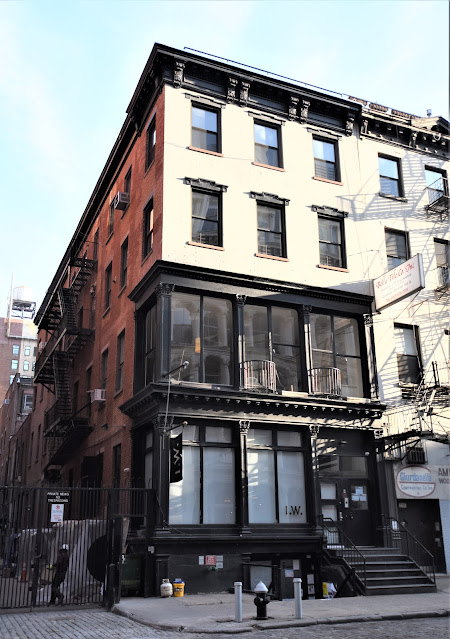 Attorney David S. Jones was the sixth son of Samuel Jones (known as the Father of the New York Bar) and Cornelia Herring (often spelled Haring).  He was born at the family's country home, Tryon Hall, in South Oyster Bay, Long Island on November 3, 1777.  Soon after graduating from Columbia College he was appointed private secretary to Governor John Jay and upon his return to New York joined his father's law practice.
Jones inherited a large share of the sprawling Herring Farm.  By the mid 1820's streets had been laid out on the property and the eastern section, later known as the Bond Street District, was seeing the rise of opulent residences.  In 1828 Jones began construction of a large brick-faced home at No. 2 Bond Street, just east of Broadway.  (That section of Broadway was known as Great George at the time.) 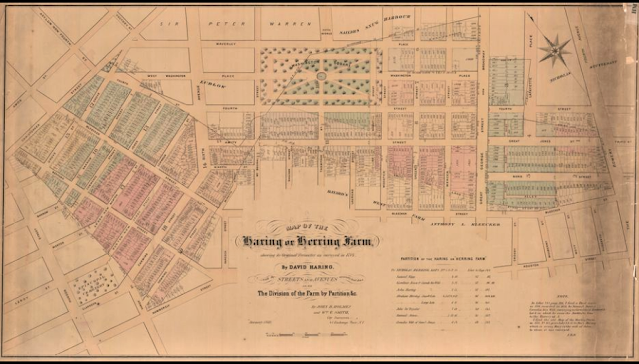 An 1869 map shows the original Herring farm as surveyed in 1784 with the contemporary streets overlaid.  from the collection of the Princeton University Library
Completed in 1829, the 26-foot wide Jones house was three-and-a-half stories high above a short English basement.  A service road, known as Jones Alley, to the side afforded windows on three sides.

Jones had been married three times--each time to a woman of sterling pedigree.  His first wife, Margaret Jones (of a non-related family) was the granddaughter of Declaration of Independence signer Philip Livingston.  Susan Le Roy, his second wife, was the daughter of Herman Le Roy, one of the wealthiest citizens of New York; and his third wife, Mary Clinton, was the eldest daughter of Governor DeWitt Clinton.
The ample size of the new house was necessary.  The three marriages had produced 18 children.  In addition to his legal practice, Jones was trustee and legal advisor of Columbia College, the General Theological Seminary and the Society Library, and a director in the Phenix Bank.
In 1835 Jones moved his family to the Long Island estate, although he continued to work in the city.  (He gave up the arduous commute in 1840, but never returned to Bond Street.)
The 1917-1918 Valentine's Manual of the City of New York noted, "After Judge Jones' departure from Bond street, his old residence became the 'fashionable boarding house' of Mrs. Lois Street...She had ample experience in the business, for as early as 1809 she and her husband kept a boarding house at 67 Pearl street."
Lois's deceased husband, Caleb Street, had been a prosperous merchant.  Her well-to-do boarders in 1838 included Gabriel Wisner, a Front Street merchant.  She placed an advertisement in the Morning Courier and New-York Enquirer in September 1842 offering:

Board In Bond Street--At no. 2 Bond street, board with very pleasant rooms can be obtained.  A gentleman and his wife or a few single gentlemen will find his a desirable location for the winter.

Lois Street moved her boarding house business to No. 47 Lafayette Place, the northernmost house on LaGrange Terrace, in 1844.  The Bond Street house next became home to John William Schulten, described by The New York Times as "a well-known merchant of this City."  His commission business was located on Broad Street.
Boarding with the Schultens was Dr. James Stewart, the medical examiner of the Mutual Benefit Life Insurance Company.  He remained with the family until they left in 1847.
An auction of the household items held on April 16 that year hints at the elegant interiors.  Included were imported carpets, "mahogany sofas and chairs covered with crimson plus, ottomans...mahogany card and dining tables, bronze Astral and mantel lamps...dressing bureaus and with stands with Egyptian marble tops" and "glass decanters and tumblers, wines and liqueurs, white China Ware" and other upscale items.
For the next few years No. 2 Bond Street was home to a private school.  Most such schools were segregated by sex--instructing either the sons or the daughters of wealthy families.  But the Giraud School was surprisingly co-educational.  An advertisement in 1848 read:

The Misses Giraud's French and English school for young children, will re-open on Monday, September 11, at No. 2 Bond street.

In 1853 the widowed Margaret Howell was operating No. 2 again as an boarding house.  While her tenants were still professional, the increased number reflected the gradual decline of Bond Street.  (The more boarders in an establishment, the less exclusive it was considered.)   Among her boarders in 1855 were Charles F. Bartholomew, who dealt in mourning goods; salesman George D. Humprys; Phineas W. Sprague whose forwarding business was on Front Street; accountant William F. Reed; and, Dr. James Warner.
No. 2 Bond Street was sold at auction on December 7, 1858.  It was purchased by Dr. Joshua F. Bridge.  The house became home to his family and to his Graefenberg Institute which treated women's medical issues.
Bridge developed his own medicines.  An advertisement in The New York Times on November 123, 1860 touted:

The Graefenberg Company's Uterine Catholicon is a certain cure for all female irregularities, weakness, tumors, ulceration, inflammation, whites, failing and other local derangements of the uterine organs, as well as the constitutional troubles arising from them.

The price was $1.50 per bottle (about $48 today).  But for $6 "five bottles will be sent by Express, and charges prepaid to the end of the Express line from New-York," said the ad.  "Dr. Bridge pledges his word for the truth of the above," it promised.
Bridge described his services in The New York Times on February 23, 1861, saying:

The Graefenberg Institute Buildings are in the finest and most central portion of New-York City (No. 2 Bond-street, near Broadway).  They are four stories high, open, airy, elegantly furnished and arranged, and are admirably adapted for the comfort of those who wish to place themselves under the immediate care of the resident physician, who resides in the buildings, and who has been long and favorably known to the community for his skill and experience.  The diseases treated at the Institute comprise chronic uterine and other difficulties of women...and the Institute enjoys, as it deserves, the entire confidence of those who require its advantages.

Dr. Bridge moved his facility to Brooklyn in 1863.  The new owner of No. 2 Bond Street, Anthony S. Hope, was a wholesale grocer.  He initiated major changes to the building by raising the attic to a full fourth floor and giving it a modern Italianate cornice and cast metal lintels over the windows.
It was operated as a boarding house for almost decade.  After David Tetzlaff purchased the property around 1872 he converted it for business purposes, including a two-story cast iron storefront.  The former basement level became Tetzlaff's "eatinghouse," while upstairs were the "gentlemen's furnishings" store of Blackmar, Hart & Boyd; Loskamp, Schaible & Lerch, jewelers; and Stecheri & Wolff, "German booksellers and importers of European literature."
In 1878 George Murphy, "manufacturer, importer and dealer of photographic goods," opened his store in the building.  He sold plates, lenses, cameras and other supplies.  The goods were not inexpensive.  A dozen 11 x 14-inch negative films (or plates) cost $7.50 in 1889, or about $215 in today's money.

Anthony's Photographic Bulletin, February 1889 (copyright expired)
In 1892 the St. Louis and Canadian Photographer reported "Mr. Geo. Murphy, the enterprising dealer of number 2 Bond St., N.Y., has been compelled, on account of his phenomenal increase of business, to seek more room and better facilities."  David Tetlaff's restaurant was still in the basement level but the personality of Bond Street was increasingly becoming more industrial.
Within three years all the tenants of the upper floors were clothing manufacturers.  In 1895 S. M. Bondy & Co.'s business was described as "cutting clothing."  The other tenants were Rothblatt & Abrahams and Joseph S. Blatt & Co., both of which made knee pants.
At the turn of the century the basement space was now Miller's Restaurant.  Its cashier, Gustave Mensenge, got himself in trouble on the evening of December 2, 1902.  Described by The Evening World as "neatly dressed and is a fine-looking young fellow," had been arrested on charges of having attempted to hug a young woman on Lexington Avenue.
In court the next morning Mensenge denied the accusation, saying his mistook Emma Morgan ("a pretty young girl who lives in Long Island City," according to The World) for a friend.  According to him, he greeted her, "How are you, Mamie?" and she replied, "Oh, very well," with a smile.  He testified that when she agreed it was a delightful evening, he asked "Would you like to go to the theatre with me?"
"How rude you are sir; I don't even know you!" she blurted.
Mensenge told the judge, "The next thing I knew I was placed under arrest."  He did not explain how the conversation had continued so long without his realizing the she was not his friend.  Because Emma had not appeared in court, the judge held Mensege on $500 bail until she could be brought in. 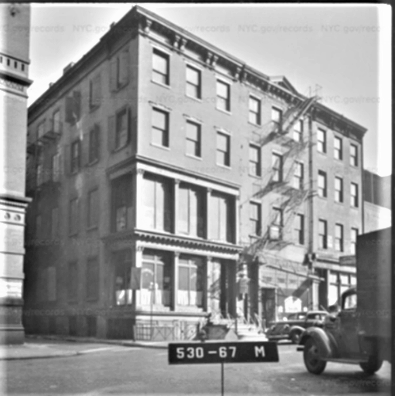 photo via the NYC Dept of Records & Information Services
Throughout the first three quarters of the 20th century the former Jones house held small factories.  But that all would change as the Bond Street neighborhood saw the arrival of artists, musicians and trendy shops.  By the mid-1970's the popular nightspot The Ladies' Fort was at No. 2 Bond, and in the former Tetzlaff restaurant space was the First Amendment, an improvisational theater.
On October 28, 1977 The New York Times reported "Jazz will return to the Ladies Fort at 2 Bond Street, near Broadway and Bleecker Street, with the Battle of the Big Bands."  In October 1985 the First Amendment celebrated its 10th anniversary. 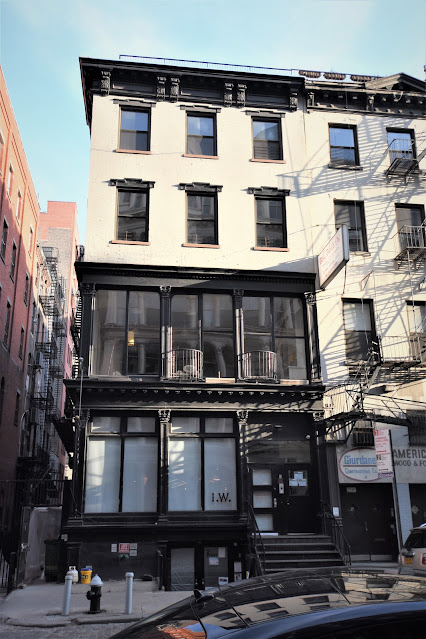 In 1993 the upper three floors were converted to "living-working quarters for artists," one per floor.  After nearly 200 years the structure bears only hints of the handsome mansion erected by David S. Jones.
photographs by the author
Posted by Tom Miller at 1:12 AM