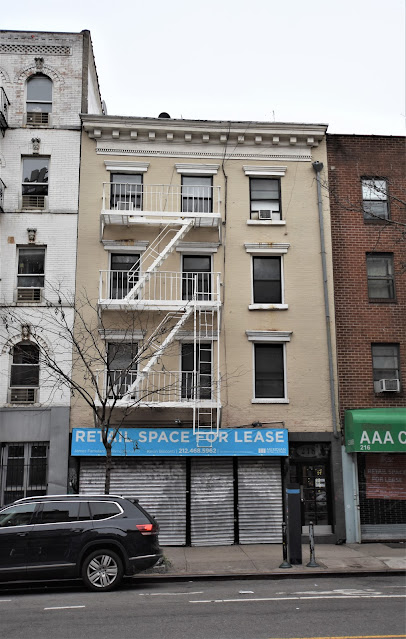 The offset door (right) was originally the access to the rear house and yard.

By 1853 Mary Dawson ran the boarding house at No. 218 Avenue A.  It was a respectable way of making a living since the death of her husband, Patrick.  A mix of the popular Greek Revival and Italianate styles, the architectural detailing of her 25-foot wide house was modest--molded lintels and a dentiled cornice.  In the yard behind was a second, smaller house for additional rental income. 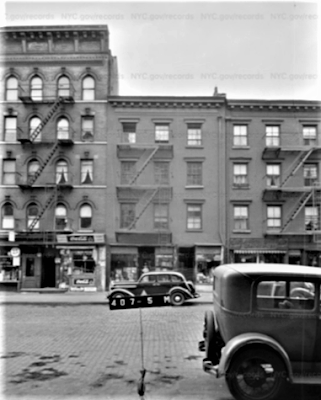 The building as it appeared around 1941.  image via the NYC Dept of Records & Information Services
George Siglar lived in the building in the Great Depression years.  At around 1:30 on the morning of October 21, 1932 he was riding in the automobile of Edward Fauer who was apparently bringing him home.  They had almost made it when Fauer noticed a friend at East 13th Street and Avenue A and pulled the car over to talk.  Just as Fauer was about to drive off again, two men appeared and demanded money.
In the affray that followed Siglar was stabbed in the chest, suffered a broken nose and was robbed of $31.  The Brooklyn Daily Eagle reported "The two robbers then threw Siglar and Fauer from the machine."  One of the thugs jumped in and drove off, leaving his accomplice on his own.
Fauer's and Siglar's shouts were heard by a patrolman who caught Tony Fasulo, the one who had stabbed Siglar.  He had an interesting alibi at police headquarters.  "In the lineup Fasulo insisted he was drunk and did not know what happened."
The gritty East Village neighborhood changed in the third quarter of 20th century as artists and musicians moved in.  Today the apartments in both the front and back buildings at No. 218 Avenue A are outfitted with modern amenities like stainless steel appliances--and indoor plumbing.  Realtors romantically and incorrectly market the rear apartments as being in "the carriage house."  But other than a coat of paint, a 20th century fire escape, and a reconfiguration of the residential entrance, little has changed outwardly to the widow Mary Dawson's house.
photograph by the author
Posted by Tom Miller at 1:03 AM

Email ThisBlogThis!Share to TwitterShare to FacebookShare to Pinterest
Labels: avenue A, east village