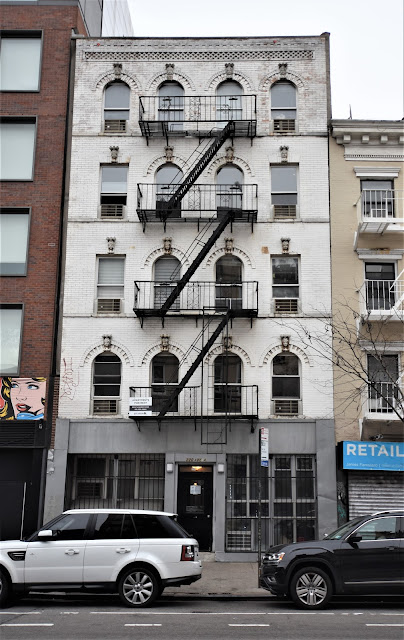 Around 1859 the four-story store and tenement was erected at No. 220 Avenue A, just south of East 14th Street.  There were two shops on the ground floor, separated by the residential entrance.  In the rear yard was a second, smaller building which was also held rented rooms.
Between 1850 and 1859 nearly 1,000,000 Germans arrived in America and those who remained in New York mostly settled in this neighborhood--earning it the name Kleindeutchland, or Little Germany.  The tenants in No. 220 Avenue A most likely spoke only German.  In 1861 they included grocer Frederick Jung; George Graeff, a metal smith; Charles Weismann, a painter; Martin Wolf, who was a tailor; and the widow Margaret Bauman who seems to have been the landlady.
Frederick Jung's rooms were very convenient to his business, since he operated his grocery store downstairs.  The other space was a biergarten, the back room of which was sometimes used as a meeting place.
At the time powerful newspapermen like Horace Greeley and political groups like the Free-Soil Party were pressuring Congress to enact a bill that would encourage intrepid citizens to settle in the West.  Such an act would present a great opportunity to immigrants.  On April 12, 1860 The New York Times reported on a meeting of the Working Men's Political Union.  It said, "A meeting of the Society which has assumed the above title was held last night in the German saloon, No. 220 Avenue A.  The object for which it has been ostensibly organized is the promotion of the movement in favor of the passage by Congress of a Homestead bill, securing the public lands in limited quantities to actual settlers...At a pretty late hour the meeting adjourned."
For three violent days in July 1863 New York City was terrorized by what would be known as the Draft Riots.   To augment troops fighting the Civil War, a new law had been enacted to draft men into the army.  But corrupt practitioners focused on the working class—primarily Irish immigrants—while the wealthy bought their way out of service.  What started as a protest against the draft quickly disintegrated into a bloody riot with mobs ransacking homes and businesses, murdering innocent blacks, and beating random civilians caught on the streets.
Following the restoration of order, citizens filed claims for the damages they suffered.  In August Margaret Bauman claimed $83.81, without specifying the exact losses.  It was a significant amount for the widow, about $1,760 by today's standards.
The Avenue A property was purchased by Otto Dietrich Hashagen and his son, Henry Otto, in 1876.  Otto, originally originally a shipbuilder by trade, came to America from Germany with his wife in 1844.  Henry Otto was born the following year.  Six more children would follow.
Hashagen not only moved his family into the building, but his saloon business, too.  Henry was, by now, a printer, but he helped in his father's saloon.
Among Hashagen's tenants that year were Francis Briggs, a laborer; Julius Hanetsch who listed his occupation as "beer" and most likely worked in the saloon downstairs; and Michael Weiner was a peddler.  Living in the rear building were Henry Koepfel, who ran a candy store; George Kulenkamp, a carpenter, and his wife, Lucy; and another carpenter, Philip Rodenhausen.
Otto and Henry Hashagen made significant improvements to the building in 1878.  He hired architect J. T. O'Brien to add a fifth story and to alter the interior.  O'Brien placed an ambitious metal cornice on the completed structure and graced the openings with unusual cast iron keystones in the form of female portraits.

O'Brien saved Hashagen money by executing details, like the eyebrows over these openings, in brick.  But then gave them the added touch of the unusual cast iron keystones.
As had been the case with the previous saloon, Hashagen's back room doubled as a meeting space which he called Washington Hall.  It was often the venue of political gatherings, such as the meeting of the German Republicans on October 25, 1880, and the angry meeting of between 20 and 30 pawnbrokers on April 24, 1883 following the new law requiring pawnbrokers to pay a yearly license fee of $500, a crippling $13,000 in today's money.
Henry had married Caroline Steger in 1872.  She in childbirth in 1884, but the infant, whom he named Florence, lived.  The Daily Union said "she was left to the care of her father, Henry Hashagen, a saloon keeper at 220 Avenue A.  Naturally she was made much of."
Following Otto Hashagen's death in 1888, Henry became full owner of the Avenue A property.
In the summer of 1889 Henry sent five-year old Florence to New Jersey to visit an uncle, "in the hope that the country air might do her good."  The Daily Union reported, "While there she made friends with a little spitz dog belonging to a neighbor.  One day, while they played together, the dog, with the meanness and viciousness which characterizes the whole breed, turned on the child and bit her."
Florence was taken to a hospital where the wound was cauterized.  It healed nicely and the incident was forgotten.  When Henry visited Florence a month later on Sunday, August 18 she was "well and comparatively robust."  The Daily Union said "She asked to remain there longer and was gladly indulged."
But when he returned the next Sunday, "she was in horrible convulsions.  On the Wednesday following she suddenly complained of feeling unwell and of difficulty in swallowing."  Henry brought the little girl home, where she only worsened.  The Daily Union said "She was parched with thirst, and the sight of water maddened her.  The very sound of water drawn through the tap in the house sent her into violent convulsions."
Because Henry had never been told about the dog bite, he couldn't give the doctor any information.  Finally, Dr. Veshlage questioned the uncle who remembered the incident.  Two other doctors were brought in, but the hydrophobia was too advanced.  The Union Daily reported "Her weak constitution was a mercy to her.  Heart failure intervened and saved her from the horrible extreme, symptoms of barking and biting."  Nevertheless, on September 1 the newspaper reported "In awful agony and paroxysm of pain, poor little Florence Hashagen, a tot of only 5 years of age, passed away to rest in this city late Friday night."
By 1890 the meeting room was being called Hashagen's Hall.  It was the scene of a Socialist meeting on March 1, 1890 to discuss the recent elections in Germany, and a "mass-meeting of street cleaners, hostlers and cartmen" to denounce the treatment of men employed by the Street Cleaning Department in February 1894, for instance.
By the turn of the century Hashagen's tenants included Irish immigrants.  One of them, Charles Manthey, attempted a heroic act on May 29, 1900 with tragic consequences.
John J. Schneible was a delivery driver for Rouen, Buehler & Son and on that afternoon his horse "took fright" on East 13th Street.   The New York Weekly Press reported "Schnieble was unable to control him, and there was great danger that some one would be hurt as the street was crowded with children."  Manthey saw the horse headed to a group of children.  He ran into the street and grabbed the bridle, but was lifted off his feet and dragged about 30 feet.  The article said "the enraged horse tossed him toward the curb.  Manthey fell on his head, and he was picked up dead."  He had suffered a broken neck.
On May 12 an announcement appeared in The New York Press of the auction of "the fixtures and furniture of [the] saloon" at 220 Avenue A.  Three years later the Hashagen estate sold the property, the New-York Tribune noting on March 24, 1906 that it "has not changed hands for about thirty years."
In 1912 a streetcar ran up the center of Avenue A.  The Fishman family lived in No. 220 that year.  Their son, Henry, who was four years old, darted into the street in front of the building on November 10 right into the path of an oncoming car.  The New York Press reported "The youngster ran into a trolley car and fell under the rear truck, and his leg was crushed above the ankle."  A policeman named Millen ran to the scene and saved the boy's life by using his club and a leather thong to fashion a tourniquet.  The Evening World reported "His left leg was so badly smashed that Dr. Grendy of Bellevue Hospital amputated it and then took the child to the hospital." 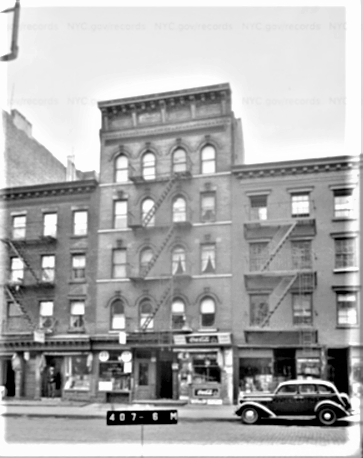 The cornice was intact when this photo was taken around 1941.  via the NYC Dept of Records & Information Services
Tenant Harry Sidora was apparently supposed to be working in the East River dock neighborhood on the afternoon of August 6, 1931.  Instead he took a nap on the roof of the three-story building at No. 18 Corlears Street.  In his sleep, he rolled off.  The New York Sun reported, "the injuries he received in falling are regarded as serious."  The article added "he regained consciousness in Gouveneur Hospital and was able to identify himself."
When the building was sold by the Bank of New York in December 1940 it was described as "a five-story tenement for twenty families."   It was purchased in 1976 by Morris Malek, whom attorney Floyd Feldman, director of the Good Old Lower East Side housing agency described in 1981 as "the operator of some of the worst buildings I have ever seen."
Indeed, in the three years Malek owned No. 220 he was slapped with more than 100 violations including "no heat and hot water, leaks, broken walls, loose brick work and defective fire escapes," according to The Villager.  A fire in 1979 damaged the roof and resulted in the loss of J. T. O'Brien's 1878 cornice.  The Villager reported "According to one tenant, the fire was set by a junkie during a dispute with his wife in a top floor apartment."
The changing demographics of the East Village neighborhood were reflected not only in the new name Loisaida, but in the tenant list.  At the time 100 percent of the residents were Hispanic.
Gentrification of the neighborhood was already beginning when Malek sold No. 220 to John Carrese and Gaspar Mucaria.
According to The Villager, tenants reported "They told us to get out."  The residents, some of whom had been in the building more than two decades, were finally paid to give up their leases.  Brent Sharman, an organizer with the housing group Adopt-A-Building told The Villager he had hoped that they "would fight to remain there and get services restored," but "What can you do?  for the people who lived there $2,000, $5,000 is a lot of money."
With the building vacated, a renovation was begun.  Completed in 1983, it resulted in two apartments per floor in the front building and one per floor in the rear. 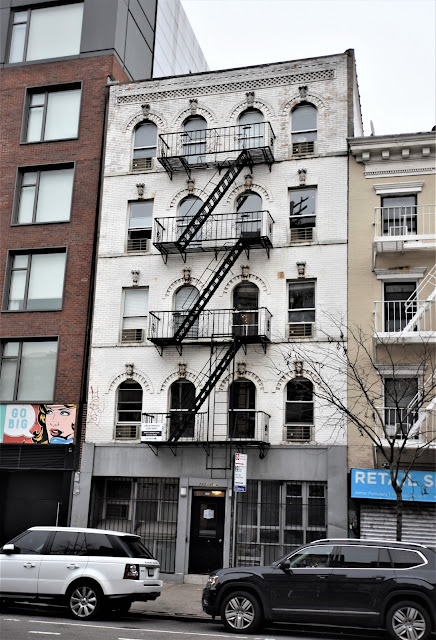 The building with its rich history is easily overlooked, but the cast iron faces staring out from above the windows are worth a pause.
photographs by the author
Posted by Tom Miller at 1:13 AM