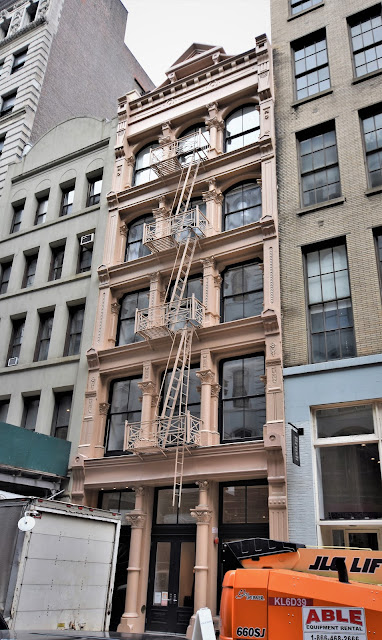 As early as 1870 Fifth Avenue and Broadway above 14th Street were seeing change as commerce edged northward, prompting wealthy families to leave their brick and brownstone mansions.  Between the two thoroughfares, a livery stable had stood at No. 7 East 19th Street for years.

In 1885 the transition was nearly complete.  Union Square, once an elegant residential enclave, was now a retail center.  On both Fifth Avenue and Broadway were high-end stores--dressmakers, art galleries, and jewelry and piano stores among them.  That year book dealer Robert Carter hired architect Thomas R. Jackson to design a modern store and loft building on the site of the old stable.

Born in England in 1826, Thomas R. Jackson had come to America as a child with his parents.  He had held the position of head draftsman in the office of esteemed architect Richard Upjohn and worked with him on the design of Trinity Church.  Among his well-recognized works by now were the Academy of Music and the Jerome Mansion on Madison Square.

At each of the upper floors he stacked Corinthian pilasters and columns--one standing before the other as if bullying its smaller brother for attention.  Jackson finished the design with an elaborate pediment that imitated a gable. 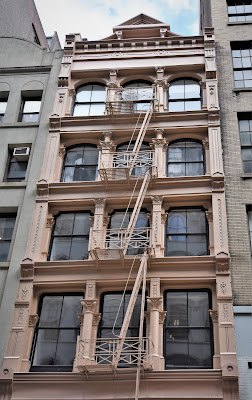 A year before construction had begun on Carter's speculative structure, William B. Norman was hired by Peter C. Kellogg & Co. as a novice auctioneer.  In reporting on the sale of millionaire Theodore A. Havemeyers horses on June 3, 1884, The Sun mentioned "At 10 o'clock Mr. William B. Norman, a light boy auctioneer recently imported from Baltimore, began the section annual horse sale."

The light boy's success was meteoric and he moved his own auctioneering business into No. 7 East 19th Street.  Norman's clientele was affluent and the items he sold were high-end.  In response, in 1889 he moved to No. 205 Fifth Avenue and renamed his firm the Fifth Avenue Auction Company.  His former space was taken by the Thomas & Wylie Lithographing Company.

Both firms would be involved in unflattering press in 1891 when they appeared in court for back rent.  Both accused the other of being the deadbeat tenant.   No doubt shocking to his moneyed clients, on May 28 The Sun reported "Execution for $3,026 has been issued against William B. Norman, auctioneer...in favor of the Thomas & Wylie Lithographing Company for rent."

Two days later The New York Times advised "William B. Norman says that the Fifth Avenue Auction Company is in no wise involved in the execution for $3,026 for rent, which was issued against him personally."  Norman had carefully worded the disclaimer, not denying guilt but absolving his firm of the debt.

Although its good name was restored, the messy affair may have left a bad taste in the mouth of Thomas & Wylie Lithographic.  The firm moved to West 24th Street within months of the verdict.

On June 19, 1893 Benjamin B. Vanderveer was made a director of the Cassell Publishing Company.  In reporting on the appointment The New York Times called him "a candy manufacturer of 7 East Nineteenth Street."  In fact, he was not a confectioner at all.  He was head of the American Pastry & Manufacturing Co.

The newspaper made up for the error later by editorializing "The American Pastry and Manufacturing Company has for its object, the production of pies...We do not pretend to any personal acquaintance with the modern pie of commerce, but whispers that ascend from the profounder social depths claim for it superiority to all pies except those known as 'made-by-mother.'"

Glowing reviews notwithstanding, Vanderveer would soon have to find another building in which to make his pies.  Directly behind No. 7 East 19th Street was the massive Lord & Taylor department store.   In 1895 Lord & Taylor leased No. 7 and two years later erected a connecting bridge.  The 19th Street building would be used for a decade merely for storage.  In 1915 Lord & Taylor moved uptown along with the other remnants of the Broadway shopping district.

Whether No. 7 simply sat empty for the next seven years is unclear; however in 1922 renovations were made to convert it into showrooms and warehouse space for the Colson Company.  Headed by Frederic W. Colson, it manufactured bicycles, wheelchairs, and tricycles.

When the Ohio-based Fay Manufacturing Company was reorganized as the Worthington Company in 1903 Colson became its principal.  He purchased the firm outright in 1917, changing the name to the Colson Company.   The factory remained in Ohio, and the East 19th Street was used for a store at street level, showroom on the second floor, and warehousing above.


The Colson Company sold its bicycles from No. 7 for 15 years.  On October 18, 1937 The New York Times announced that Frederick W. Colson had sold the building to Max Gordon "for altering."  Included in the alterations at that time may have been the removal of the decorative pediment.

In 1969 the Bomze Graphics and Jay Bee Photo Supplies took over the building.  Interior renovations, completed in January 1975, resulted in "photographic stores" on the ground floor, with offices, photographic and art studios, and warehouse space above.

Among the initial tenants, other than the owners, was the Norman Snyder Studios, Inc., here at least by 1977.  Here aspiring photographs could take basic and advanced courses.  Snyder also edited The Photograph Catalog here, advertised as "the in-book the entire photo-establishment is talking about."

Bomze Graphics was a go-to store for photographers on a budget.  Among the second-hand equipment available here were "cameras, enlargers, darkroom equipment, lab equipment, lighting, tripods [and] hand-held light meters," according to The New York Times on June 18, 1978.

In the 1990's cybernetic sculptor and kinetic artist Wen-Ying Tsai purchased No. 7.  The Chinese-born dissident established his studio and residence in the building.  He would remain here for two decades until his death in January 2013.  By then Thomas R. Jackson's once striking structure had been seriously abused. 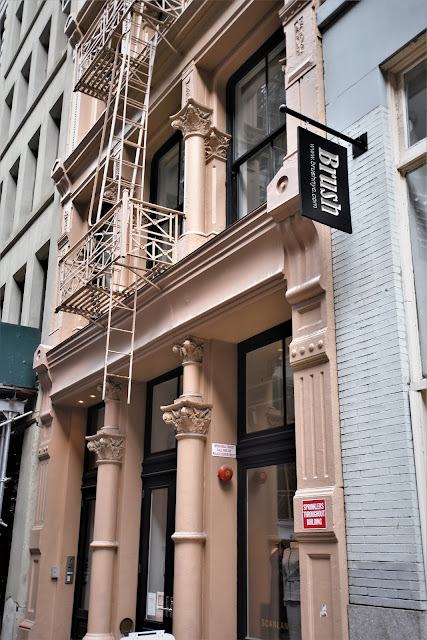 In January 2014 a private investor purchased No. 7 for $12 million for alteration into residential space.  Architect Jeffrey Cole was put to work restoring the facade and recreating the lost elements.  His meticulous transformation resulted in a near recreation of the building as it appeared in 1886.  Inside, above the store, are a total of four apartments, including a penthouse hidden from view by the replaced pediment.