By 1890 apartment living was not only accepted, but popular.  That year alone architect Edward Wenz received commissions to design more than 40 "flat houses," many of them on the Upper West Side.  Among them were four five-story buildings at Nos. 169 through 175 West 78th Street, ending at the northeast corner of Amsterdam Avenue.

Wenz designed the handsome Renaissance Revival style structures for developer Theodore Cordler.  Completed in 1891 their prim design included rusticated brownstone bases that teetered on the edge of Romanesque Revival.  The upper floors, faced in brick and trimmed in stone featured Renaissance-inspired pediments above the openings.  At No. 169 a crowned face adorned the typanum of single arched opening.  Wenz dipped into the Queen Anne style with the pressed metal cornice.

The apartments of eight or nine rooms were intended for well-to-do residents.  They boasted steam heat, hot water, "and all improvements."

Cordler and his wife, Annie, apparently had no interest in being landlords.  Immediately upon the completion of the buildings, on May 27, 1891, they sold them to Louisa Schwegler for $159,000--around $4.4 million today.

By 1894 Nos. 169 and 171 were owned by Robert S. Drysdale and his wife, Jessie.  Drysdale was brought to New York from Scotland by the linen importing company O. Jaffe & Pinkus in 1880 and he continued to be a "valued employee" of that firm, according to The Evening World in 1895.  He and Jessie had four children--R. Alfred, May, Thomas Ireland and Winifred Margaret.  All but Winifred shared an apartment in No. 169 with their parents.

Winifred was the eldest, and had shown a marked singing ability.  Her father engaged a vocal coach to teach her music, but, according to The Evening World, "she became enamored of the stage."  The newspaper added "It was not until her father became convinced that she would go on the conic-opera stage, with or without his consent, that he finally, in 1890, visited the Aronsons and secured a place for her in the chorus at the Casino."  (Composer and producer Rudolph Aronson managed the Casino Theatre, a leading venue at the time.)

By now Winifred was known to theater audiences as Madge Yorke.  She was often on the road, but as her father told the press in 1895, "Madge was accustomed to coming to see us unexpectedly, for she was an affectionate girl, and never was in the vicinity of New-York without paying her home a visit."

Another frequent visitor was actor James B. Gentry who first came to the Drysdale home with Madge in 1893.  According to Robert Drysdale, he and Jessie were pleased that Gentry seemed to take "a kindly interest" in Madge.  "We were glad that he should be in the same [acting] company, for his presence seemed in a measure a safeguard against the dangers and affronts that beset an unprotected woman on the stage."

Unfortunately, Gentry's 'kindly interest" developed into unbridled jealousy.  Drysdale said "Gentry called frequently at our house when Madge was not traveling.  I think the presence of many gentlemen, who called to see her aroused his jealously.  We entertain largely, and my daughter had many admirers."

On the afternoon of February 17, 1895 Robert and Jessie waited for Madge to arrive.  She was appearing in Philadelphia in Baggage Check and promised to make a quick visit.  Around 2:00 it was not Madge who appeared at the door, but Gentry.  When told she had not arrived yet, he insisted she had telegraphed him saying she would meet him in Jersey City on the 12:50 train.  He further said he waited but she never showed up.

He stayed at the apartment for about 20 minutes, then left.  Gentry had traveled overnight from Boston to meet Madge.  He went back to the ferry from New Jersey, but she never arrived.  All the while he "had been drinking from disappointment," according to his later testimony.  He bought a train ticket to Philadelphia, incensed that he had been stood up and certain there was another man involved.

In Philadelphia he checked at various hotels until he found where Madge was staying.  In his pocket was a borrowed pistol.  He told investigators later "I said in my mind, 'I may have to shoot some Romeo in the foot.'  I fully expected to find a man in her room."

There was no man.  Completely upset, in his words, he greeted Madge saying "Are you glad to see me?"  She looked surprised, saying "Oh, my.  What are you doing here?"  He tried to kiss her but she turned away.  The rebuff was too much for Gentry.

"I was insanely jealous and had no intention of shooting her when I left Boston, but I was so enraged, as I loved the woman."  When he fled from the room Madge lay dead on the floor.

The following morning Robert and Thomas Drysdale headed to Philadelphia to retrieve Madge's body.  The New York Times reported on February 19 "There was much grief yesterday at the home in this city of Madge Yorke 169 West Seventy-eighth Street...Mrs. Drysdale was completely prostrated."  Later The Evening World said "R. Alfred Drysdale and his sister May were preparing the house for the reception of the funeral party when a reporter called at 169 West Seventy-eighth street, this noon."

The following day that newspaper announced that the funeral would take place in the apartment on February 21.  With unnecessary detail and some disregard for the family the article said, "Notwithstanding the efforts of the undertaker, he has been unable to hid the bullet wounds which mar the beauty of the dead actress's face."

Gentry's trial began on February 22, 1896 in Philadelphia.  It was covered nation-wide; and the Aspen Daily Times reminded readers that day "He was madly in love with her and when she refused his advances he killed her.  Insanity will be the plea."

The six-month trial ended on June 26 with Gentry being found guilty of murder in the first degree and sentenced to death.  The San Francisco Call said "Gentry looked a physical wreck as he heard the pronouncing of his doom.  His appearance was pitiable."

Gentry was scheduled to be hanged on April 29, 1897.  A little more than a week before, on April 29, the Governor of Pennsylvania commuted his sentence to life imprisonment.  Most galling, no doubt, to the Drysdale family were reports that circulated in newspapers towards the end of the year.  The Philadelphia Bulletin, for instance, reported on December 26 that Gentry "has not only recovered a vigorous degree of health, but has become the center of admiring attentions at [the Cherry Hill Penitentiary].  His cell is made a sort of Mecca by theatrical people visiting this city, and the memory of his atrocious crime is already growing faint.  Thus we make heroes of our villains."

The Drysdales sold the two buildings that year, to Louis Schulz.  He transferred title to Benjamin Schulz in November, giving him a sizable mortgage of $47,000.  In September 1898 Schulz advertised rents in the "large, light and airy single apartments" from $50 to $55--about $1,680 per month for the most expensive today.

Although the Schulzes were most likely relatives, business trumped family relations in 1902 when Louis Schulz foreclosed.  He purchased the buildings back at auction for $54,303.

In an interesting and somewhat shocking side note, James B. Gentry was pardoned by Pennsylvania Governor Edward Sydney Stuart in 1909 and was released at 1:00 on the morning of June 23.  Ironically, the following year he was locked up again, this time in an asylum.

The Illinois newspaper the Urbana Daily Courier reported that he "is an inmate of the Long Island Home, a sanitarium.  He was taken there at the instigation of friends who have noticed his queer actions recently."  The sub-headline read "Mind of Actor, Who Killed Madge Yorke, Fifteen Years Ago, Is Affected."

No. 169 continued to be home to successful businessmen and their families.  By 1914 Francis L. Plummer lived here.  Well-known in the advertising community, he was secretary of the committee formed to discuss "the relation of the dealer to pending anti-trust legislation at Washington including the proposed one price to all plan of merchandising," according to The Taking Machine World that year.  He was the author of several professional articles, like the 1921 "Duplex Sales Plan" and "Want of Sympathy."

In 1928 all of Edward Wenz's row except for No. 169 were demolished for an apartment building.  It and other modern apartment buildings little by little lured well-to-do families from Victorian flats.  In 1947 No. 169 was converted to eight single room occupancy rooms on each floor.  Among the working class tenants that year was city bus driver Lawrence Robertson.

Robertson, who was 25-years-old pulled his bus from Central Park onto Fifth Avenue on the afternoon of July 16, 1947.  He failed to see an emergency truck speeding south on Fifth Avenue despite its siren sounding and red lights flashing .  The resulting crash injured 24 passengers, 16 badly enough to be hospitalized.  Robertson was arrested and charged with third-degree assault for failing to give the right of way to and emergency vehicle.

A renovation to No. 169 in 1971 resulted in just one apartment per floor.  In the basement was the 78th Street Pottery, a craft school.  When it looked as though the school would close, its students came to the rescue.  On June 2, 1977 The New York Times reported "Twenty crafts students who didn't want to see their school shut its doors recently took over the 78th Street Pottery and will run it as a cooperative." 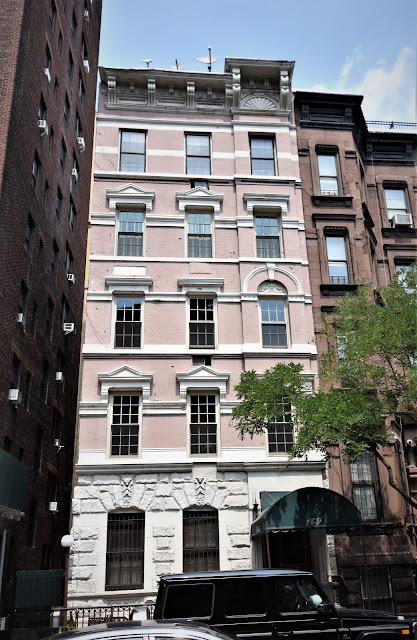 The brick and stone have been regrettably painted pink and white; but overall the building retains its strait-laced 1881 appearance.