By any account Lilly Daché had invented herself.  She claimed she was born in France; however the petition for naturalization of her husband, Jean Despres (a vice president of Coty) in 1940 declared she was, in fact, born in Poland.  Rumors hinted that she might also have been Romanian and Jewish.  Her birth year was  reported both as 1893 and 1904.  What was not arguable, however, was her design talent and her brilliant marketing and business sense.

Arriving in Hoboken, New Jersey on September 13, 1924, Daché started out as a sales clerk in Macy's, then in a women's hat boutique, the Bonnet Shop, on Broadway at 77th Street.  She and a co-worker, milliner Hattie Fredericks, purchased that shop for $1,000 on installments in 1926. Their deposit was $200.  Within a few months Lilly bought out her partner.

Lilly Daché's creative designs, at a time when no woman would leave her front door without a hat, were exotic and ground-breaking.  And expensive.  She would be responsible for introducing the turban to female wardrobes and shocking the fashion world with deliciously bizarre designs.

Lilly rapidly expanded with two more boutiques, and then in 1928 merged them into a single Midtown shop.  Her organizational acumen was a sharp as her designing abilities and she formed Lilly Daché, Inc. to operate the business.  According to Susan Ware in her 2004 Notable American Women, "Hats with cherries and hats without; sleek-fitting cloches, exotic turbans, glamour snoods; even something called the half-hat--such was the stock-in-trade of Lilly Daché."

Ware noted that at a time "when a decent hat could be had for $2.95, run-of-the-line Daché creations ranged in price from $39.50 to $79.50."  The onset of the Great Depression made little impact on Lilly's high-end sales and in 1936 she embarked on her greatest move yet.  She  organized another firm, the 78 East Fifty-Sixty Street Realty Corporation, of which she was president, and laid plans for a lavish structure to house her millinery business including a two-story residences for herself and her husband.

In her 1946 memoirs, Talking Through my Hats, Lilly explained that her husband was reticent to spend lavishly on a building project during the Depression, but she prevailed.  "So at last we signed the papers for the property, and then we started planning the building which was to be a monument to hats, and to beauty, and to things that seem frivolous ad silly sometimes, but which really are so important to the lives of every woman."

On November 9, 1936 The New York Times reported that Lilly had announced plans to demolish the two existing buildings at Nos. 78 and 80 East 56th Street, to be replaced by "a modernistic structure erected for occupancy about June 1, 1937."  Construction would take slightly longer.  But on September 15, 1937 Vogue magazine reported "Lilly Daché has packed up her hat-boxes and moved into the nine-story building at 78 East Fifty-Sixth Street, which she herself has just built.  T. H. Robsjohn-Gibbings designed the interiors, with a grand staircase sweeping up to the Salon."

That Robsjohn-Gibbings was the only name mentioned was worth note.  The structure had been designed by Shreve, Lamb & Harmon which had worked, by Lilly's prompting, with Paris architect George Letelie.  Lilly gave Letelie the lion's share of credit for the design, rarely, if ever, mentioning the American architects.  In her autobiography she totally ignored Shreve, Lame & Harmon; and instead called Letelie "a brilliant young architect."  She wrote that she felt if "George could come, I was sure, my building would be the picture of my dreams."  (George was, not coincidentally, Lilly's brother-in-law; the husband of Jean Despres' sister, Marguerite.)

According to Life magazine on September 13, 1937, the House of Daché cost $500,000 to construct--a considerable $8.5 million today.  Sitting on a two-story limestone base, the upper seven stories were faced in stucco.   In February 1939  the Fifth Avenue Association announced the architectural awards for the best buildings erected from January 1, 1932 through October 1, 1938.  No. 78 East 56th Street received the award for "the best individual building."  No mention of the architects was included in the announcement.

The sleek, early Modernism design was as impressive inside as out; and for some perhaps more so.  Architectural Record & Building News explained that the building "consists of three units: four floors for the design, manufacture and sale of women's hats, a penthouse apartment for Mme. Daché and three loft floors to be rented."  (The rental idea never came to pass.)  The article mentioned the Parisian-style treatment of the shop spaces "where 'class appeal' is a very essential part of the sale.  The public ares are as little as possible like those of the average store:  counters, display cases, adding machines--all are carefully hidden from the customer."  No merchandise was displayed.  Instead, customers sat in mirror-walled recesses and hats were brought to them.

Architectural Record & Building News pointed out that "Moreover, the salesrooms are arranged for the progressive elimination of the customers, so that only the hardiest reach Mme. Daché's Bureau on the third floor."  Among those "hardiest" were stars like Marlene Dietrich and Gertrude Lawrence.  Eleanor Roosevelt, Louella Parsons and Dorothy Parker were repeat customers.  And it was Lilly Daché who designed the fruit-laden turbans worn by Carmine Miranda. 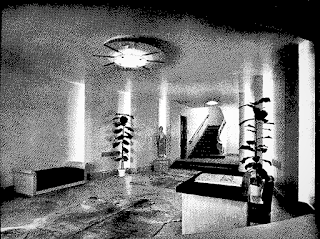 The top two floors were home to Lilly and her husband.  Custom-designed furnishings and textiles worked in harmony with the architecture.  In the living room was a stone- and mirror-faced fireplace and on the marble floor of Lilly's dressing room was a "monkey fur rug."

Not everyone was wowed by Lilly's sometimes innovative designs.  In July 1936 she had spent $2,500 on original headgear worn by Belgian Congo natives.  The headdresses, composed of shells, hides, and feathers, were to be a source of inspiration.

In 1937 Life magazine wrote "On Sept. 13 she will open her new ten-story building on Manhattan's East 56th Street, with an exhibition of what threatens to become the 'African style' in hats this fall and winter.  For $32.50 a Lilly Daché customer can, so far as headgear goes, look just like a Congo chief."

The unnamed author of the article was brutal.  Saying that Lilly "does a thumping big business throughout the U.S.," the article added "One reason why women's hats look the way they do is probably because the leading creative hat designers cannot draw.  They see an African native, a Matisse painting, or a lopsided stovepipe which gives them their inspiration...Lilly Daché uses this system.  It is admittedly a good one because she now owns the largest exclusive millinery business in the world."  Nonetheless, the critic called her creations "outlandish."

Lilly suffered some bad press when, on March 5, 1941, most of her 120 employees walked off the job.  Representatives from the Millinery Workers Union told reporters that female workers making hats "for the masses," which sold at wholesale for $12 per dozen, earned $30 for a 35-hour week.  In contrast, Lilly's workers, who worked on hats selling for $35 each, made from $16 to $22 for a 40-hour week.

Lilly denied the charges, telling a reporter from The New York Times that "The strike was originated by agents of a union which apparently represents a minority."  She said the union leaders "have made impossible demands and in addition do not represent the workers."  The newspaper mentioned that she was "irked by the presence of union pickets outside her door."

When Lilly staged the fashion show of her spring collection on January 13, 1949, there were more than hats in the line.  The Times reported "Yesterday...Lilly Dache added a new facet to her already well-known reputation as a milliner that of a full scale designer of coats, suits and dresses."  Lilly's collection of apparel was well received.  "So well did each part of the costumes complement the other, the overall effect of the manikins [i.e. models] as they whirled and twirled down [the] runway was one of perfection."

Lilly's tremendous success and subsequent personal fortune was evidenced early in May 1953.  In a panic she called police to report that a diamond and platinum bracelet had disappeared from her penthouse  She placed the value at $10,250--nearly $94,000 today.  Detectives could find no signs of a break-in.  According to The New York Times, they "told a very sad Miss Daché that it looked like a case of loser's weepers."

Three weeks later Lilly removed a dress from her closet and found in the pocket her missing bracelet.  On May 14 The Times wrote "The police said yesterday that Miss Daché had supplied her own happy--and traditional ending--to the nursery rhyme, in a finder's keepers climax."  The article said "The police are happy, the insurance company is happy, and Miss Daché is happy--if somewhat embarrassed."


Indefatigable, Lilly became president of Lilly Daché Hair Products, and in 1956 published her second book, Lilly Dachés Glamour Book."  She included exercise and diet instructions among her beauty tips.  She warned her readers about the cringe-inducing "secretarial spread."  But she stressed that exercise and diet should not be a punishment.


"Before you start any kind of diet or exercise plan, there is something that I believe in the bottom of my heart is much more important.  It is what the Americans call fun, and Frenchmen call joie de vivre...If anything isn't fun, the heck with it."

The end of the House of Daché came in 1969 following Jean Despres' retirement.  Lilly closed the business and left New York.  She and Jean spent the rest of their lives in their homes in Florida and France.  She died in France, on New Year's Eve, 1989.

In the meantime, No. 78 East 56th Street was remodeled in 1971.  It is unclear how drastically the brilliant 1937 design was altered.  Not that it much matters.   In 1986 the building was demolished to make way for the Park Avenue Tower with entrances on East 55th and 56th Streets. 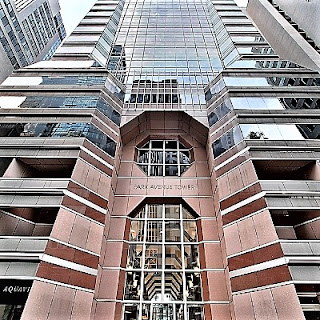 many thanks to reader Matthew Priest for suggesting this post
Posted by Tom Miller at 2:21 AM