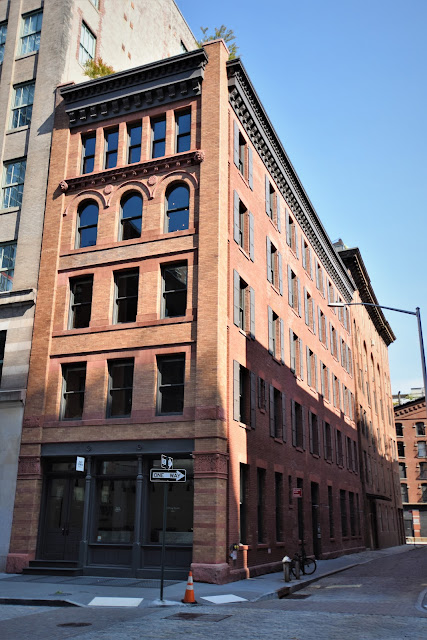 The 25-foot-wide, two-and-a-half story brick house that sat at the northwest corner of Hubert and Collister Street in the early decades of the 19th century was owned by Trinity Church.  In the 1840's it was home to the Rev. Jonathan M. Wainwright.  Directly behind was a similiar house, also owned by the Church.  As the century drew to a close the neighborhood had fully changed from residential to industrial and the once handsome homes had been converted for business use.

On July 22, 1891 Joseph H. Bearns purchased the old houses, paying Michael and Frances Murtha $25,500, a little over $700,000 today.  The principal in the liquor importing J. H. Bearns & Co., he commissioned architect Julius Kastner to design a five-story store and loft building on the site.

Among Bearns' employees in the Hubert Street building in 1895 was James Connelly.  The apparently fiery-tempered Irishman did not make it to work on January 24 that year.  The operator of a streetcar enraged him that morning and he was arrested "for throwing stones at motorman in Broadway," according to The Sun.

Rather surprisingly, it appears that Bearns and Kastner had not included an elevator in the original plans; relying instead on "hoistways," or shafts, through which goods were raised and lowered by pulleys.  In April 1898 architect E. R. A. Berg filed plans to "erect elevator shaft extending from cellar to 5 ft. above roof."

Joseph H. Bearns died in 1914, leaving an estate of $850,000, a staggering $21.5 million today.  The terms of his will no doubt raised eyebrows city-wide.  The estate was distributed among three of his four children--Lillie May, James and Joseph.  The New York Times noted the will "cut off Melville Bearns without a heritage."

James S. Bearns inherited the Hubert Street property and in March 1916 leased it to Otto Isenstein & Co.  The firm imported gums used to make varnish.  Among the products offered in 1917 were "Congo Gum, Kauri Gum, Varnish Gus and Dumar Gums."

World War I sparked anti-German sentiment and discrimination throughout the United States.  Many German-sounding banks, insurance companies and other businesses voluntarily changed their names to avoid problems.  It may have been what prompted Otto Isenstein & Co. to apply for a corporate name change in May 1918 to Innes & Co., Inc.

The war impacted the firm in another way.  On October 30, 1918 Drug & Chemical Markets reported "While most of the kauri gum to be imported is being used by the trade, not a little of it is required by the Government itself.  It is used for various parts of ships and to a large extend for railroad passenger cars."  Because of that need the War Trade Board limited importations of kauri gum to 3 million pounds during 1918.  Innes & Co., Inc. and all other importers, were required to supply a detailed report to the Board showing the amount it brought into Hubert Street.

The firm seems to have been fair to its employees in terms of wages.  When it was looking for a boy "to run errands" in March that year, it offered a starting salary of $8 per week.  Although the hours were long--8:30 to 6:00--the wages for an untrained boy were attractive, around $130 a week today.

After less than two years in the building Innes & Co. moved out in January 1919.  It returned to its original use, home to the wine and liquor importer Julius Wile Sons & Co.  Like J. S. Bearns & Co., it dealt in high end products.

In the summer of 1938 its executives were outraged when retailers offered one of its brands, Peter Dawson scotch, at discounted prices, equal to about $48.50 today.  On August 11 The New York Times reported "At the offices of Julius Wile Sons & Co., officials said they have already taken steps to halt the price-cutting on their brands."

Julie Wile Sons & Co. had been gone from No. 10 Hubert Street for about two years at the time.  In 1936 John N. Germack took over the building for his pistachio nut operation.  He had purchased the Zeobia Company from its founder, Joseph A. Zaloom, six years earlier, replacing that name with his own.

Its Red-Lip brand pistachios were sold to retailers not only as packaged snacks, but for use in their penny vending machines.  One advertisement said in part "There is only one quality of Red-Lip Pistachios--and that is 'top quality"...The public goes for flavor--so, if you want to boost your sales of pistachios, fill your machines with the brand for which the public has shown a decided preference--Germack Red-Lip Pistachios!"

John N. Germack moved to Hudson Street in 1943; but the painted name remained on No. 10 Hubert Street for decades despite subsequent tenants, like Central Supply Co., here in the 1950's, and Graphic Horizons, Inc. in the '80's.

The 20th century had not been kind to the structure.  By the early 1990's the brick and terra cotta were damaged.  The cornice had been removed at some point in the second half of the century and the cast iron storefront was obliterated and filled in.
But, as was the case with so many neglected Tribeca loft buildings, it was rescued by a residential transformation.  On October 22, 2014 Curbed New York reported that the architectural firm ODA was working on converting it "into a rather high-end rental buildings."  But the project went much farther than a mere renovation, it was as the architects worded it, "a conservation." 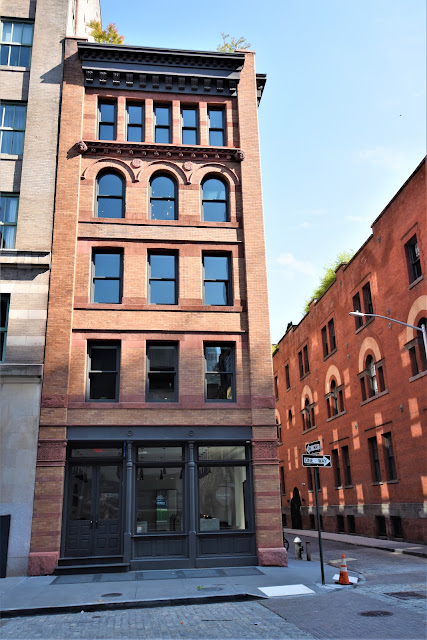 The damaged terra cotta details were restored, the lost cast iron storefront reproduced, and a cornice that closely matched the original was fabricated.  A penthouse, unseen from street level, was added, resulting in a total of just four sprawling apartments.  The remarkable restoration brought No. 10 Hubert Street, phoenix-like, to its 1892 nobility.