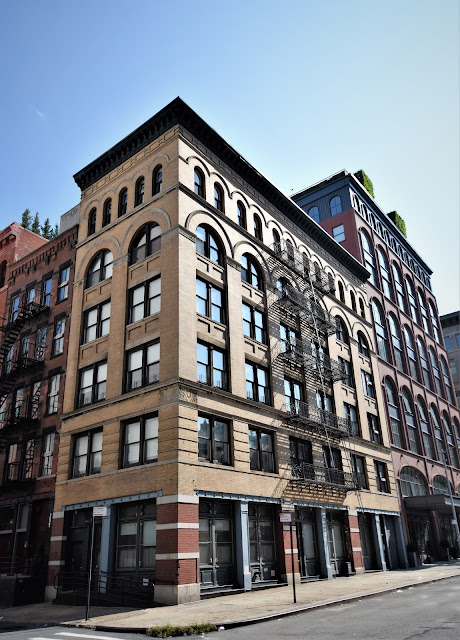 The wooden house at No. 28 Hubert Street had stood for half a century when laborer John Ellis lived in a rented there room in 1886.  He was working on the roof at No. 42 Watts Street in October that year.

Around the same time Gustavus L. Lawrence operated a produce business on Franklin Street.  In 1895 he purchased No. 28 Hubert Street, where police had tracked John Ellis and the stolen gold, along with two other old buildings, No. 30 Hubert Street and No. 397 Washington Street.  He hired architect George F. Pelham to replace the vintage structures with a modern loft building on the 28 by 78 foot site.

Completed in 1896, it cost Lawrence the equivalent of just over $1 million today.  It was a happy marriage of Renaissance Revival and Romanesque Revival styles, six stories tall.  Pelham used beige brick above the red brick ground floor.  Three-story arches drew the eye to the upper floors.  The motif was carried on in arched openings along the top floor.  A captivating chain design executed in brick filled the frieze below the sheet metal cornice. 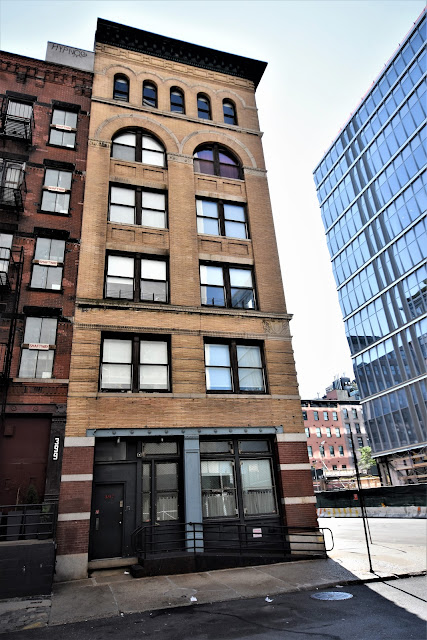 On April 30 1896, almost immediately upon the completion of the structure, Lawrence sold it to Joseph H. Bearns, who ran his liquor business steps away at No. 10 Hubert Street.  The transaction was purely an investment for Bearns, who leased the building to the Cleveland-based Sherwin-Williams Paint and Varnish Company.

Sherwin-Williams appears to have mostly manufactured marine paints in the New York factory.  In 1896 it advertised its "vessel paints" and "marine paints" in Beeson's Marine Directory.  In 1901 the firm landed lucrative contracts with the United States Navy.

The Financial Panic of 1907 was devastating nation-wide.  The New York Stock Exchange dropped nearly 50 percent from its peak the previous year and panic caused chaos on Wall Street.  Banks and businesses failed and overall production fell by 11 percent.

Sherwin-Williams's military contracts may have helped the firm weather the economic crisis.  A year later things seemed to have been turning around.  A reporter from The Sun visited the Washington Street factory on November 6, 1908 for a story on the recovery.  "Activity was noticeable at the big paint works of the Sherwin Williams Company and it was said at the plant that rosy reports from other sections of the country where the firm does business were prophetic of a resumption of the prosperity temporarily checked by the financial stringency."

The company had upgraded from horse-drawn drays to motor trucks by 1912 when a horrific accident took place in New Jersey.  Drivers Robert Sohl and Joseph Lynch were arrested on June 14 that year after the tragic incident.  The New York Times reported "Edward C. Hallgring, 13 years old, was run down by an automobile truck owned by the Sherwin Williams Paint Company while playing ball near his home in Hamburg Place Road.  The front wheels of the truck passed over the boy's body, killing him."

Joseph H. Bearns died in 1914 and it was about that time that Sherwin-Williams left No. 397 Washington Street.  It became home to grocery importers La Manna, Azema & Farnam.  The firm had a branch office in Paris, run by Arthur Azema.

La Manna, Azema & Farnam imported Italian and Spanish products like olive oil, sardines and mushrooms in bulk, then canned and bottled them in the Washington Street building.  It labeled different items with their own brand names--like Francois canned mushrooms and Mary Elizabeth sardines.

Decades before sexual discrimination laws the firm explicitly hired only females in its bottling department.  An advertisement in the New-York Tribune on October 6, 1918, for instance, read "Girls, bottling establishment; good pay steady employment."

A reflection of the much different times, the company's specificity in hiring, deemed unacceptable today, extended to religion.  A June 8, 1919 ad sought an "Office Boy, Christian."

In 1918 owner F. W. Keller was charged with violations of a labor law for not having adequate emergency exits and was ordered to provide "egress to street from termination of stairway."  It was most likely at this time that the iron fire escape with its decorative, scrolled railings was added to the Hubert Street elevation.

La Manna, Azema & Farnam remained in the building into the Depression years, following by Millner & Son, suppliers of "foodstuff," in the late 1930s.  The following decade saw Archibald & Kendall, importers and processors of spices and seeds, calling No. 397 home.

Founded by William D. Kendall, the firm packaged its spices under the Black Diamond label.  At some point a lucrative and sensible side line was established under the name Archibald & Lewis Co.  While Archibald & Kendall sold its "spices and seasoning herbs," its affiliated company sold "bird seed and bird food." 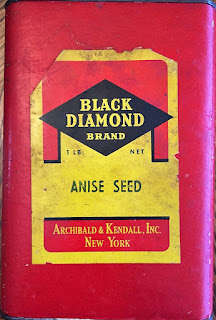 Over the next three decades the building saw a luncheonette on the ground floor and Independent Cordage Company in the upper stories.  But the Tribeca renaissance was on the horizon.

Although a small apparel company still operated in the ground floor in 1982, the building was being converted to cooperative apartments.  It did not hurt that resident Ekkehart Schwartz, who was president of the co-op board in 1982, was an architect.

The conversion was completed in 1984, resulting in one residence per floor.  In 1997 the apartment firm was gone and an office now shared the lobby floor.

By 2005 the Civitella Raniere Center was in the building.  Founded in 1993 its mission was "to bring together visual artists, writers, and musicians from around the world who demonstrate talent and an enduring commitment to their disciplines." 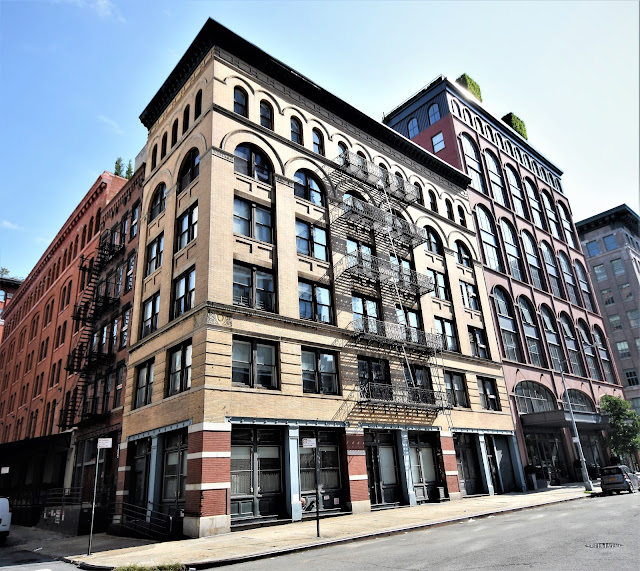