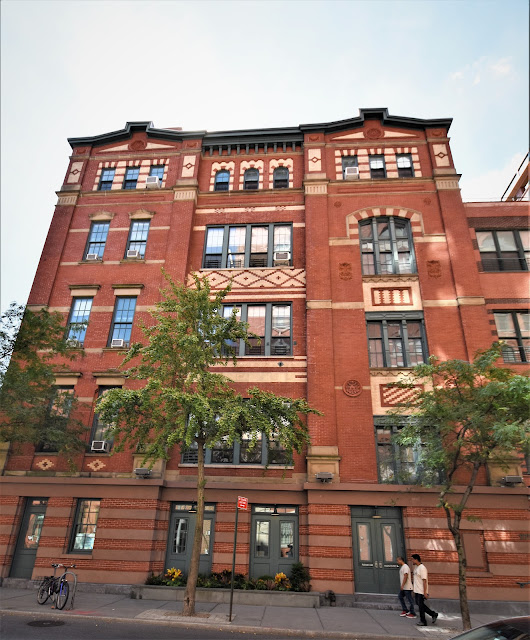 In 1884 the Journal of the Board of Education of the City of New York reported that the Committee on Sites and New Schools had appropriated "$6,500 for No. 272 West Tenth street."   The address, located about a block from the Hudson River piers, sat within a marginal neighborhood.  Immigrant families lived in the tenements and old houses around the site.

The Board of Education hired architect David L. Stagg to design Public School 7.  Completed in 1886 it was an animated take on the often somber neo-Grec style which Stagg married to the more playful Queen Anne.   He cleverly gave the building a symmetrical silhouette, then treated the end pavilions of the three-part vertical design independently.  Two colors of brick--beige and red--worked with limestone and terra cotta to create a colorful, vibrant design.

Teachers in the New York school system were modestly compensated.  In 1891 Miss M. A. Rohda (female teachers were rarely married) began working here.  She received the starting salary of $386 per year, or around $900 a month today.

An unofficial tradition in the public schools was an outing for the older students at the end of the school year.  In 1891 about 500 students from Public School No. 7 and another school "clubbed together" as worded by The New York Times, and "deputed J. Frank Write, Principal of Public School No. 7...to engage the new steamer General Slocum."

The General Slocum was a newly-launched 235-foot steam sidewheeler especially designed for river excursions for large groups.  (It is remembered for the horrific loss of more than 1,000 lives when it burned to the waterline on June 14, 1904.)  The Times explained "The idea was to go up the Hudson to West Point view the cadets, and return home by moonlight."

The plan was highly popular.  The $1 tickets were pricey--in the neighborhood of $28 today--and were no doubt a hardship for many of the immigrant children's families.  Nevertheless they sold rapidly, according to the newspaper.  On the morning of the outing several of the throng of students were accompanied by their mothers.  But disappointment was on the horizon.

The Times reported on June 28, "But when over five hundred people collected on Jewell's Wharf yesterday morning, wrapped in shawls and overcoats, there was no Gen. Slocum, neither man nor boat.  The would-be excursionists waited for an hour."  Finally Principal Wright arrived.  He explained that he had not been able to book the General Slocum "or any other boat" for the day.   The joy-crushing incident underscores the nearly impossible challenge of getting a mass message out to student families at the time.

In 1897 the school was given a new number, Public School No. 107.  It was around the same time that it began changing from an ordinary school to one operated under forward-thinking social and educational theories.

City children often had no other place to play summer games like kick-the-can and stick ball than the streets.  It was a dangerous and dirty prospect (the horse-drawn vehicles were not only deadly, but they left omnipresent horse dung in the streets).  On July 2, 1898 the Record & Guide announced that the school yard of Public School No. 107 would remain open through the summer as a playground. 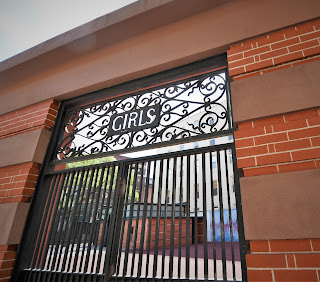 Tuberculosis was responsible for a large percentage of tenement deaths in the first years of the 20th century.  It was generally felt that the close stifling air of the tenements was responsible for the disease (in fact, it was the crowded conditions that facilitated the rapid transmission).  In response public schools in the tenement districts initiated "fresh air classes."  Public School No. 107 added them in 1906.

Dr. Hester D. Jenkins explained a few years later, "when the children are born of immigrant parents, who came to this country with very little notion of health or hygiene, they must not only learn to live from people outside of their homes, but furthermore the homes need all the enlightenment that the children can bring into them."  The children in the fresh air classes were given information that they were instructed to pass on to their parents, such as "the need of fresh air, or the danger of spitting, coughing and sneezing."

Many of the families who sent their children to Public School No. 107 could not afford to provide them with lunch.  In 1908 Mable Kittredge began lobbying for the "three-cent luncheons."  Two years of convincing resulted in Public School No. 107 being one of the test schools for the program on November 23, 1910.  New Outlook magazine wrote on January 7, 1911 "Everybody can grasp the fact that a school-child, especially one that is already under-nourished, needs a midday meal" and said "There are therefore thousands of children who can at the utmost gain nothing but dubious scraps by going to their homes at midday."

Public School No. 107 received a new, equipped kitchen and lunchroom.  Now, for just three cents, the students could buy a hot lunch.

Another innovation in the school was the introduction of special classes for the physically disabled.  Children who were born with mobility issues in the 19th and early 20th century had dismal prospects.  Here special instruction was provided to prepare them for a wage-earning skill down the road.  The Sun reported several years later "Not so many years ago, besides being cut off from the usual joys of a normal life the crippled child had to while the hours of the dreary day in some dark tenement home, not even helped to get an education, which is presumed to be the right of every American child, regardless of its condition."

Tenement children never had bountiful Christmases.  So public schools hosted celebrations on the last day of classes before the holiday.  On December 21, 1911 two parties were held in Public School 107--one in the morning for the older children, and one for the younger students in the afternoon.  There was a large Christmas tree on the stage of the assembly hall and Francis Crisson, the father of one of the teachers, dressed in a Santa suit to hand out half-pound boxes of candy.

Elizabeth Crisson pulled aside Willie McClellan, who had already received his box, and sent him with a message to a classroom on an upper floor.  The Evening World reported "Willie had not been out of the room a moment when he came swiftly but quietly back and whispered in Miss Crisson's ear--whispered, mind you, and the kid only ten years old: 'Miss Crissen, please ma'am, there's a fire burning in Room 207."

The teacher asked if it were a large fire.  "No, ma'am, but it's all over the teacher's desk and the platform."   Elizabeth Crisson told him to hurry to the principal's office, where the fire alarm was located.  The bell for early dismissal was sounded and the principal came to the auditorium stage.

When she announced "Children, we will have a quick dismissal drill now," she was met with a chorus of rebellion.  The Evening World reported "'No, no,' shouted a hundred voices.  'Have it another time.  We want Santa Claus.'"  They were told Santa would be there when they returned as the teachers in the room realized this was no drill.

"The grumbling children rose, formed in lines and marched to the corridor.  They they walked into a dense cloud of smoke," reported the World.  "'Why, it's a real fire!' they said." 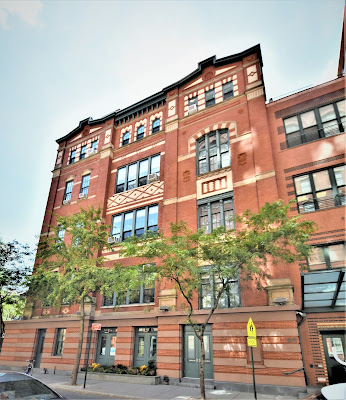 Newspapers praised the orderly evacuation, taking note especially of little Willie's calm handling of the situation.  "Neither from the manner of the boy nor that of the teacher did any of the children in the room suspect that danger threatened," reported the New-York Tribune.  The article added "in less than three minutes after the news was first spread one thousand children, about seventy of whom were cripples, and twenty teachers had marched out of the building to the sidewalk."

The Tribune's estimate of the size of the student body was somewhat inflated.  The Evening World began its account saying "Seven hundred and eight little children from four to twelve yeas old, sixty-five of them a special class of cripples and three of them altogether helpless, were marched and carried out of Public School No. 107...to-day without the slightest panic, without a shout or a scream, though the halls were filled with choking smoke from a fire in a third story classroom."  Firefighters extinguished the blaze shortly after.

As the 1913 school year began the lunch program in Public School No. 107 was made available to the disabled students for just a penny.   On November 9 that year The Sun reported "In Public School 107 there are about eighty cripples, boys and girls, ranging from 5 years of age upward.  These cripples are supplied with warm, nourishing food at cost."  The article said "Without exception almost the cripples take advantage of the service of lunches except one boy whose ailment is his stoutness and he has been advised to limit his food supply at the counter."

A special class of special needs students were those diagnosed with anemia.  At the time of the article the school's principal, Mrs. Tupper, was about to inaugurate "a system of serving the children in the anaemic classes with mid-morning milk."  The Sun described their special arrangements.  "There are about twenty-one children in this school, which is situated in the heart of the Greenwich Village, who are anaemic and for whom a special room is provided on the top floor of the school plant, where they recline in easy chairs, wound up in warm woollen blankets with hoods, where they are taught their daily lessons.  Each afternoon these children lie down in their chairs and go to sleep for three-quarters of an hour.  It is for these children that milk will be provided at 10:30 each morning so that they may build up their bodies."

In the first year of the Great Depression The New York Times reported that due to "Manhattan's constant loss of inhabitants," the Board of Education would be "abandoning three schools."  Among them was Public School No. 107, which was closed in June 1930.  Seven months later, on January 8, 1931, auctioneer Thomas F. Burchill announced he "had been ordered to sell the property" by the city.

In a happy coincidence of timing, the New York Central Railroad was eyeing the property at the southwest corner of Barrow and Washington Streets, occupied by the school building of the Roman Catholic Church of St. Veronica.  The railroad purchased Public School No. 107, then negotiated with the church.

The dedication of the new parochial school was held on May 1, 1932.  The still edgy make-up of the neighborhood was evidenced in the comments of the speakers.  Cardinal Patrick Joseph Hayes said in part "I was glad to come and see Greenwich Village.  Had I strayed around down here alone tongues might have begun to wag."  Another speaker, Municipal Court Justice William J. Caffrey, mentioned that he "had feared Cardinal Hayes would not accept an invitation to that part of the city."

In addition to educating its juvenile parishioners, St. Veronica's rented out the assembly room to various groups when the school was not in session.  It was repeatedly the scene of union meetings of the International Longshoremen's Association in the late 1930's, for instance; especially during their 1937 labor strike.

St. Veronica's school remained in the vintage structure until its closing in 1963.   In September 1970 the newly-formed K-8 Village Community School opened in the building.  The independent school was established by local parents with a first-year enrollment of 170.  In 2003 architect Leo Blackman was commissioned to expand the building.  His remarkably harmonious addition echoed Stagg's banded ground floor and the spirited contrast of the red and beige brick--perfectly matched to the original. 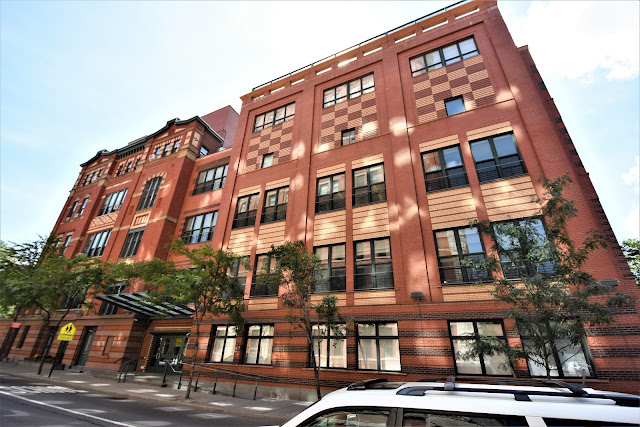