When the four-story house at the corner of Weehawken Street and Amos Street (later renamed West 10th) and the two-story house directly behind it were erected, the riverfront a block away was developing.  By 1832 three commercial docks were already in place.  And by 1872 the neighborhood was bustling with saloons, ship chandlers, crockery stores and other businesses catering to the shipping business.

That year brick manufacturer Charles Shultz purchased the old houses and commissioned architect William E. Waring to design a tenement and store for the site.  Completed in 1873 Waring's five-story Italianate-style structure was, not surprisingly, faced in brick.  Attractive cast iron sills and lintels chosen from a foundry catalog provided the bulk of the decoration.  The segmental arched lintels echoed the Italianate style; while their incised decorations and the geometrically designed sills drew from the recent Eastlake style.  The entrance featured a robust cast iron arched pediment.  The pressed metal cornice was no doubt also from a foundry catalog.  When used for commercial structures its the half-round pediments would most often have announced the name of the owner or date of construction.

The storefront was, as would be expected, composed of cast iron.  The store used the address of No. 1 Weehawken Street.  It is unclear what businesses were originally housed here; but by 1896 it had become home to The Plug Hat saloon.  Its patrons were seafarers, longshoremen and women of less-than-savory reputation.  Two years earlier, before moving to Weehawken Street from West 13th Street, The Sun reported "police say [it] is the most disreputable five-cent saloon in the city."

Among the saloon's regulars in 1896 was sailor James Joyce who, according to the New-York Tribune, "when not at sea works along the North River front as a longshoreman."  The article said "Regularly every day when ashore, it is Joyce's custom to go to a saloon at No. 1 Weehawken-st., near the White Star pier, known as the Plug Hat."  The newspaper explained that the saloon "gets its name from the schooners of beer set up there, which hold nearly as much as could be put in a plug hat."

On the afternoon of September 11, 1896 Joyce walked into the saloon like any other day.  But it would not end like any other day.  Another regular, known as Jim, was there.  He did odd jobs along the docks.  He called Joyce into a rear room and offered him a drink from a flask.  Joyce naturally assumed it was whisky and took a swig.  He was immediately seized with severe pain.

Jim said coolly, "You have drunk carbolic acid, my friend," and, according to the Tribune, "walked out of the place before Joyce would comprehend what had occurred."  He was taken to St. Vincent's Hospital.

The New-York Tribune reported that the police "are now looking for 'Jim.'"  But, it warned, "If Joyce's fellow longshoremen get hold of him first, however, he will be sorry.  They were angry enough when they heard of the alleged joke to lynch him if they had him in their grasp."

The apartments above the saloon were large--just two per floor.  But understandably the tenants were working class.  Life in the riverfront neighborhood tenements was difficult.

One resident, Ann  Murray, navigated the snowy and icy sidewalks of West 10th Street on the night of January 25, 1899.  It is unknown whether she had been drinking, or if it was simply the slippery conditions that caused her to fall into the cellar areaway of No. 296 West 10th Street; but whatever the reason the 57-year old woman died shortly afterward.

A terrifying incident occurred at No. 304 later that year.  Sarah Kinzi lived on the fourth floor and that summer had house guests from Albany, her aunt Mary Shea and her toddler son, Tommy.  August 3 was a blisteringly hot day.  Sarah left the apartment to do shopping and Mary remained back to do chores.

The New York Times said Mary had placed her son on the fire escape, "vainly trying to keep cool."  While the 45-year old woman washed dishes, she noticed the smell of smoke, and followed it to a bedroom which she found in flames.  She rushed into the room and pulled down the draperies to try to smother the fire.  But then disaster happened.

"While in this perilous work a draught suddenly slammed the door shut.  It had a spring lock, and when Mrs. Shea groped her way to it trying to get out, she found herself locked in a veritable furnace," said the article.  The smoke was so thick that she could not find the lock and her panic increased.

The flames licked around her, twice setting her hair on fire.  She managed both times to put them out with her hands, burning them badly.  Luckily for Mary, the upper section of the window was open and the escaping smoke and her screams attracted the attention of a passerby.  "He ran up the stairs and after locating the woman, with much difficulty smashed in the door," reported The Times.

Mary staggered out of the bedroom and fell, unconscious, to the floor.  Her rescuer carried her to safety and called for an ambulance.  In the meantime, all the tenants who were at home "made a rush for the open air."  Tommy, who was still playing innocently on the fire escape, was grabbed up and taken to the street.

Mary Shea survived, but was seriously burned.  The fire was mostly confined to the bedroom, which was destroyed.

The saloon continued to cater to hard-edged patrons--both male and female--as the new century dawned.  Among them was Mary Stinson, a "repeat offender," according to police.  Something happened in the bar on Tuesday afternoon, December 5, 1911--possibly her ejection--which angered her enough to hurl an iron pot through the window.  The act landed her in jail.

Although she was no stranger to the court, The Evening World felt "Mary would have got off with a sentence of possibly three months...if it had not been for the loose tongue in her head."  Potentially unruly prisoners were held in an iron-barred cell in the courtroom and Mary took offense to it.

When Justice McInerny ordered her to be brought before the justices, it took two court officers to drag her from the cell and place her before the bench.  Then she assailed the judges.

"It's bad enough for a respectable lady to be brought into court, but the idea of being placed in a cage like a wild animal is an insult to the human intelligence.  Sure, what do you think I am, a she-bear, a wild tiger, or a British lion with its tail twisted?  I'd have you know I'm a respectable American woman."

When told by Justice McInerny to "take it easy," she erupted "I take nothing easy.  It's the likes of you that have things easy.  You, with your women's dresses on, a fine lot of ninnies you are."

Calling a judge a "ninny" and referring to judicial gowns as female attire was not a good idea.  McInerny sentenced her to six months in the penitentiary.  But the hot-tempered Mary was slow to learn a lesson.

"I'd rather spend six months in jail than five minutes in yonder cage," she said, as reported by The Evening World.  "You're a fine lot of animal keepers, you are."

The trio of judges said "in chorus," according to the newspaper "We will make your sentence one year.  Perhaps you'll keep quiet then."  Her silence would have to come later.  As she was taken out of the courtroom she shouted "It's an insult to decent American women to put them in a cage like wild beasts."

The Skelly Family had purchased No. 304 in 1898 and would retain possession for half a century.  Among their tenants in the early post World War I years was trucker Thomas Mulligan, who came up with an ingenious idea in 1920.  Motorcars were now everywhere in Manhattan and their owners struggled to find parking spaces.  The New York Herald explained "He conceived the idea of watching these cars for the owners for whatever gratuity the owner might wish to give."  In short, he invented the parking lot.

Quickly he was doing so much business that he brought in his brother, George.  The New York Herald said they "found their business so lucrative that they abandoned a trucking enterprise."  The Mulligan brothers ran four parking lot by the 1922; but greed seems to have gotten the best of them.  On April 18, 1922 The New York Herald reported that Special Deputy Police Commissioner John A. Harris had launched an investigation into what he called an "autocratic ring."  Pointing out that they Mulligans had no overhead, he said drivers found it "virtually impossible" to find parking elsewhere, prompting the brothers to price gouge.

George Mulligan countered, telling a New York Herald reporter "They just give what they feel like giving, some a quarter and a few a half dollar."  Nevertheless, Harris began looking into licensing parking lots and offering the concessions first to wounded ex-servicemen.

Also living at No. 304 at the time was the Myers family.  They would remain in their apartment at least through 1933.  Florence Myers attended Public School No. 3 at Grove and Hudson Streets, where she participated in the 7-D Shop Class, a girl's industrial workshop where students learned needlework and crafts.

Every year the items made by the girls were sold and the proceeds funded an outing just before school's end.  For their June 27 outing in 1923 the girls voted to go to Sheepshead Bay.  The New York Times reported the following day, "Most of them were on hand at the school in their best dresses yesterday morning long before Miss [Viola] Helff and her friend, Mrs Marion Trato...arrived to chaperone them on the trip."   But the day would not end joyfully.

"The clamorous happiness of twenty-four tenement children on a school outing, all girls between the ages of 10 and 13 years, turned with the tide at Webster's Beach, Sheepshead Bay, into tragedy yesterday," reported the newspaper.   The chaperones were unaware that the section of beach they had chosen was rarely used "because of dangerous sand and mud conditions."

The girls and their chaperones got into their bathing suits and played in the water for hours, until at around 2:40 two men down the beach heard cried for help.  The tide was coming in and the girls were in trouble.  The men rushed into the water fully clothed and began desperately trying to rescue them.  In the end three of the little girls were drowned, their teacher Viola Helff was in serious condition, and four other girls, including Florence Myers, were hospitalized.

Prohibition had caused the saloon in the building to close; but in 1935 it was reincarnated as the Weehawken Street Bar & Grill.  The neighborhood was still heavily industrial, the businesses greatly reflecting its riverfront location.  The patrons of the bar, as was the case half a century earlier, were mostly dockworkers, blue collar locals, and sailors.

When Rose Rivers purchased No. 304 in 1948 she announced intentions to "remodel the building into modern apartments."  She hired architect Joseph Lau to make the renovations.  Rivers lost the property to the Skelly Family in foreclosure in 1956.  They sold it the following year.  At the time the upper floors were vacant and "closed." 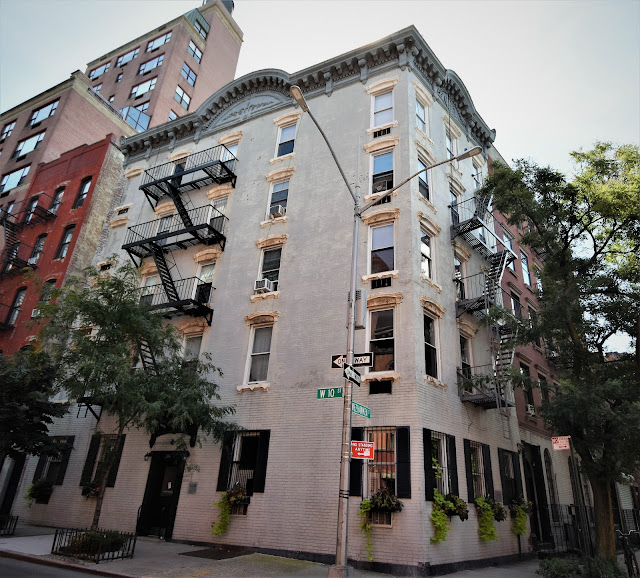 The Weehawken Street Bar & Grill was still here in 1960; but would have to move when the new owners, Modres Co., began renovations that year.  The storefront was bricked closed and the ground floor converted to two apartments and a laundry room.  The alterations were completed in 1961, resulting in three apartments per floor above the first.  The exterior renovations included a new doorway under the strangely hoovering 1873 cast iron pediment. 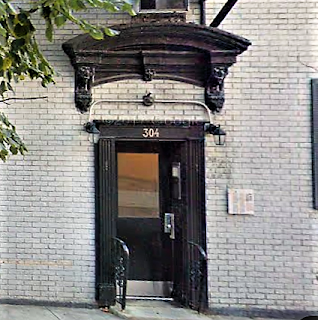 Tucked away on a remote corner of Greenwich Village, the 135-year old structure is rarely noticed.  But its handsome (if rusting) iron window treatments and the ambitious cornice deserve pause.